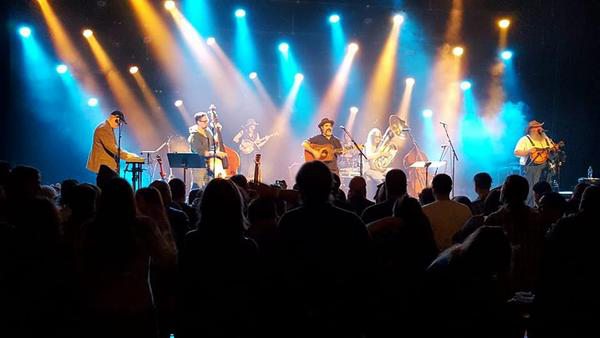 Our festival is located at Flavie Lear Field, 22601 Main St, Reeds Spring, MO 65737. This location is near the historical Work Project Administration, (WPA) old Highschool building, now housing City Hall. This unique space will provide plenty of grassy area for our festival and plenty of parking space as well.
There will be several wonderful food vendors, Arts and Craft vendors, Beer vendors and a variety of drinks (alcohol and non-alcohol) for purchase on site.

Bring your own lawn chairs and spend the day with us. Gates open at 1:30 pm. Ticket price will be $30 the day of the festival at the gate so get your advance tickets on our website now for $25. https://rockhousecenterforthearts.org/calendar-tickets

Our music lineup features:
Big Smith is an Ozarks family band composed of six cousins, including three sets of brothers, from Springfield Missouri. Big Smith was active from 1996 to 2012, having released 7 CDs as well as appearing in the documentary "Homemade Hillbilly Jam" (2003).

The Wildflower Revue is a group of three accomplished singers and songwriters in full bloom. Amy Garland, Mandy McBryde, and Cindy Woolf comprise the trio, whose roots are planted in the south Arkansas clay, the Boston Mountains, and the hollows of the Ozark plateau. Formed while recording for the motion picture, The Valley Inn, the group created its debut release in the spring and summer of 2016. The album is a collection of 13 songs- ten original works and three covers the group certainly make their own. The music leans heavily on the traditions and new perspectives of folk, country, and Americana.

Patrick Mureithi Band - Delta blues, folk and reggae - influenced music on the slide guitar, acoustic guitar and ukulele. With Kim Painter on bass, Brandon Moore on drums and Mark Bilyeu on lead guitar. "Spiritual, uplifting, sweet music that you will want to share with everyone you know and love."~Gail Hansen, Owner and Booking Manager, SOhO, Santa Barbara

Bob and Una Walkenhorst are a father-daughter duo from Kansas City, Missouri. Bob Walkenhorst has been a fixture on the Kansas City and international music scene since the 1980's as lead singer and songwriter for the critically acclaimed band The Rainmakers. 2018 finds Bob collaborating with his daughter Una, a singer-songwriter in her own right, from her 2014 release "Scars", to her recent years as part of the New Orleans folk scene. Their common love of traditional songs and 2-part family harmony is bringing about new songs, new visions, and new recordings. Their album, East Jesus, will be released Fall of 2018.
Smokey and The Mirror is husband+wife duo Bryan and Bernice Hembree. Based out of Fayetteville, Arkansas, the Smokey & The Mirror have toured nationally/internationally over the past decade. The band has supported tours for Old Crow Medicine Show, The Wood Brothers, I’m With Her, Elephant Revival, John Fullbright, and many of their musical heroes. They tour most often as a duo, but also plays many shows a year as a four-piece band. Whatever the configuration, the interplay of their two unique voices coupled with engaging, accessible songs form the foundation of Smokey & The Mirror.

Ken Pomeroy is a 15-year-old singer/songwriter with a Folk Americana sound. Transcending her age, Ken has a unique vocal quality that blends smoothly with her heartfelt lyrics. Ken began singing, writing songs, and playing the Baritone ukulele at age 9. She quickly learned to play the Concert and Soprano Ukulele, and at age 10 began playing guitar. Every year she is a regular at the Woody Guthrie Folk Festival, playing the Lou’s Rocky Road Tavern stage. Fans can catch her playing in local venues around Oklahoma City, and Norman. She has played the Grand Stage at the Riverwind Casino, and she is also a regular at the Oklahoma Rodeo Opry. In 2016, Ken received the Rising Star award from the Songwriters Association of Norman and has attended the Rock & Roll Camp for Girls since its inception in 2015. Ken released her debut EP “Minutes to Hours” earlier this year; she is currently writing and recording new songs for her follow-up CD that will be released in the summer of 2018.

Dawn Larsen grew up in the Ozarks amid lots of mountain music, arts, storytelling, beautiful hills and rivers. She taught herself to play guitar at the age of13. Though mainly a solo act she sometimes plays with her son Jacob Niceley, as well as other players, as the Vicious Hillbillies. Dawn was last year’s Rock House Music Festival Singer/Songwriter contest winner
Joann McMillan’s Flying Heart Theater Joann is a professional puppeteer specializing in audience participation and puppets of all sizes and types.

This is a rain or shine event. No refunds. We will have a large rain or shade tent set up on the Festival grounds. For more information go to www.rockhousecenterforthearts.org or call (417)272-8386