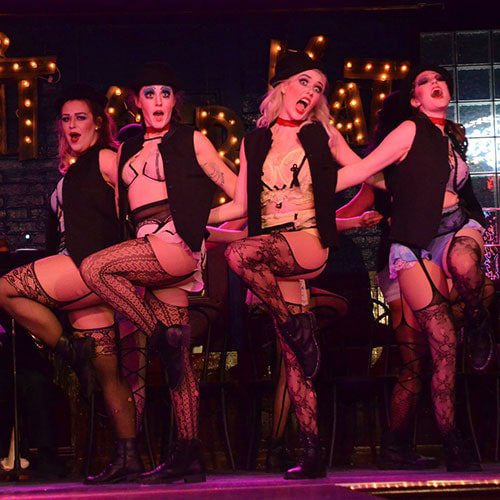 Cabaret takes audiences deep into the seedy nightlife of the Kit Kat Klub in Weimar, Germany on the eve of Hitler’s rise to power.

As the 1920’s draw to a close, with an Emcee’s bawdy songs as wry commentary, Cabaret explores the dark, heady, and tumultuous life of Berlin’s natives and expatriates as Germany slowly yields to the emerging Third Reich.  Cliff, a young American writer newly arrived in Berlin, is immediately taken by English singer Sally Bowles.

Meanwhile, Fraulein Schneider, proprietor of Cliff and Sally’s boarding house, tentatively begins a romance with Herr Schultz, a mild-mannered fruit seller who happens to be Jewish.

Cabaret is an intoxicating theatrical experience, featuring well-known classics of the musical stage such as “Wilkommen,” “Don’t Tell Mama,” “Maybe This Time,” and, of course, “Cabaret.”  The winner of 8 Tony Awards, Cabaret is a cautionary tale and a masterpiece of musical theatre sure to snare its audience in it complexities.