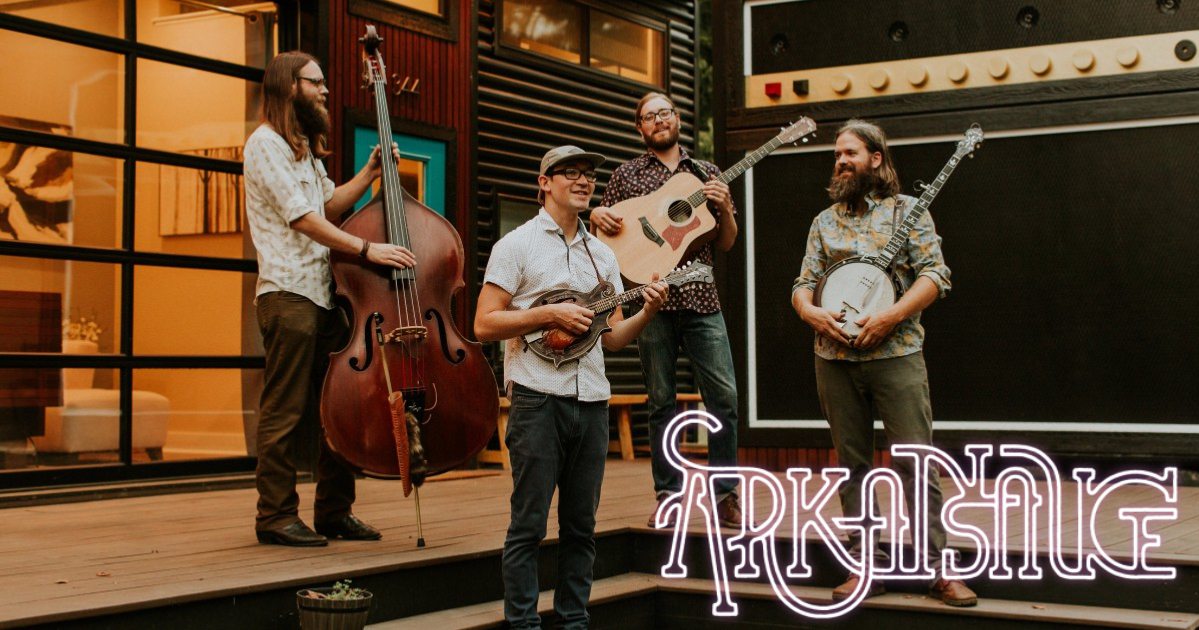 Tie & Timber is excited to host a loaded lineup for its June Dock Concert featuring Arkansauce., Julian Davis, Melinda Mullins, with a nightcap with songwriter Kevin Cott. This no-cover concert in the Rountree neighborhood is family friendly. Feel free to bring blankets and lawn chairs.

ABOUT THE MUSIC:
Arkansauce.
Arkansauce is a genre-hopping, four piece string band from northwest Arkansas, bending the rules and blurring the lines between bluegrass, newgrass, folk, americana, country, blues, and funk. With a loyal following growing every day in the Natural State and along their tour routes, the band is proud to be stepping into a hard-driving sound unique to the Arkansas quartet.

An Arkansauce show is riddled with improvisational guitar, banjo, and mandolin leads, paired with powerful harmonies and heart-felt songwriting, all held together by deep foot-stompin' bass grooves. There’s an undeniably intimate connection between the band and their fans that's contagious and leaves everyone in front of, and on the stage wanting more. Arkansauce holds their head high, as they look forward to enjoying everything life and music has in store for them and their fans.

Julian Davis
From humble beginnings, Julian Davis is a flatpicking guitarist phenomenon and singer from Pittsburg, Kansas. He walks, talks, sings and looks like someone straight out of the 1940s or 50s, and his fast and fiery guitar playing encourages even seasoned professionals to want to step up their picking game.
Julian and his bluegrass band, Julian Davis and the Hay-Burners, were featured on season 11 of America's Got Talent, and they flew to LA a few times for the production.
Julian left home at an early age to play music on the road, traveling to cities all over the country. He currently calls the Lawrence and Kansas City areas home.
At 16 years old, Julian won first place in the Kansas State Flatpicking Championship and Mandolin Championship. Julian also won first place in the Hillberry Arkansas 2016 flatpicking and mandolin competitions.

Melinda Mullins (Johnny Mullins Collection)
Melinda Mullins, daughter of Grammy-nominated songwriter Johnny Mullins, is on a legacy mission which includes sharing his songs and stories through her own performances and by inviting and encouraging others to learn Johnny-songs or just kick back and enjoy this historic body of work.

Kevin Cott
Kevin Cott is a singer/songwriter originally from Kansas, now residing in Springfield, Missouri. Influenced by Americana folk roots, and classic literature, his music has been called "honest and wonderfully free of clutter." His songs celebrate providential relationships, and leaving behind the hurt of the past. Lyrically, Kevin manages to find a remarkable balance between auto-biography and self-absorption; not always an easy line to walk as a song-writer, but one he does with self-assured confidence.