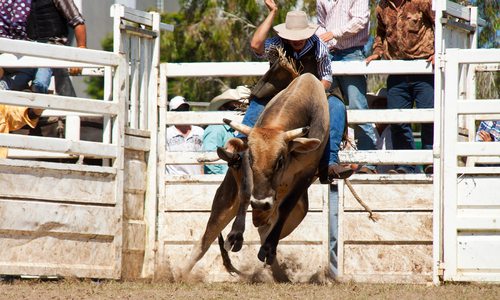 The PBR (Professional Bull Riders) is excited to announce the addition of the McDonald’s $5,000 Bounty Bull presented by the All New Fresh Beef Quarter Pounder with Cheese at the 25th PBR: Unleash the Beast PFIWestern.com Invitational presented by Bass Pro Shops at JQH Arena in the heart of Springfield, Missouri. While the event takes place September 7-9, the electrifying Bounty Bull action is only on Friday, September 7 and Saturday, September 8.

PBR fans will have a chance to receive 1 FREE Quarter Pounder with Cheese if the McDonald’s Bounty Bull bucks off the PBR rider. If the rider can hold on tight for 8 seconds, he will win $5,000
from your local McDonald’s restaurants! *****

Fans can take part in the excitement by attending the 25th PBR: Unleash the Beast PFIWestern.com Invitational presented by Bass Pro Shops on Friday and Saturday and then downloading the ALL NEW McDonald’s Mobile App. As the showdown comes to an end, McDonald’s Mobile App users will receive a pop-up offer the following day if the McDonald’s Bounty Bull prevails! To redeem the offer, simply open the coupon in your McDonalds Mobile App when valid and present while ordering at your local, participating area McDonald’s restaurants.

About Fresh Beef at McDonald’s
The move to fresh beef quarter-pound* burgers is the latest step in McDonald’s food journey to build a better McDonald’s. It’s also one of the latest customer-led initiatives in the U.S. that builds on several other recent milestones, including All Day Breakfast, committing to only sourcing cage-free eggs by 2025 in the U.S. and serving chicken items made from chicken not treated with antibiotics important to human medicine.****
All McDonald’s fresh beef quarter-pound* burgers use 100 percent beef with absolutely no fillers, additives or preservatives.

About The PBR (Professional Bull Riders)
The world’s premier bull riding organization began as a dream of 20 bull riders 25 years ago and now operates in five countries. On its elite tour, the organization features the top 35 bull riders in the world and the top bulls in the business. The televised 25th PBR: Unleash The Beast, along with the PBR Real Time Pain Relief Velocity Tour (RVT), the PBR Touring Pro Division (TPD) and the PBR’s international circuits in Australia, Brazil, Canada and Mexico have paid nearly $184 million in earnings to its athletes. Thirty bull riders have earned more than $1 million, including two-time PBR World Champion J.B. Mauney who is the top-earning athlete in Western sports history with more than $7.2 million in career earnings. PBR is part of the Endeavor (formerly WME | IMG) network. For more information on the PBR, go to PBR.com, or follow on Facebook at Facebook.com/PBR, Instagram at Instagram.com/PBR, and YouTube at YouTube.com/PBR.

Homeschool Behind the Scenes