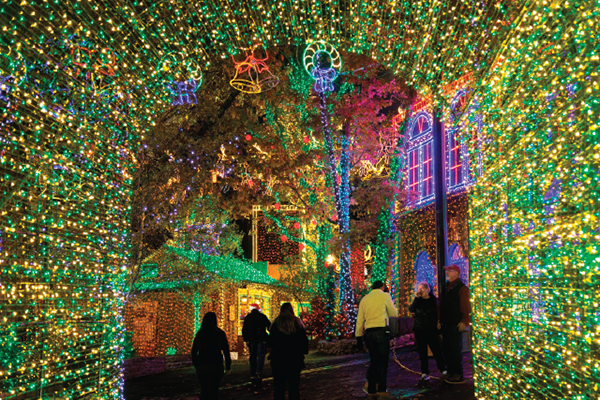 Celebrate the end of one amazing year and the beginning of a brand-new one at Silver Dollar City during the New Year's Celebration.

Our indoor venues will feature special entertainment including:

Biff Barker New Year's Radio Show - Music and comedy are hallmarks of the ol’ Silver Dollar Saloon and both are in full force as we step back in time to the Golden Age of radio with an original production.  Become part of the live studio audience as make-believe radio station KSDC rings in the New Year with a melodious and madcap style of entertainment.  The Biff Barker New Year's Radio Show will have you laughing and singing along as we stumble – sorry – stroll down memory lane.

Red Gold Heritage Hall Dance Party - What New Year’s celebration would be complete without a rockin’ Dance Party? Silver Dollar City is proud to welcome 80s tribute band Members Only to the New Year's Celebration.  These talented musicians provide the electric energy for everyone to dance the night away with songs from iconic groups like Chicago, Journey, and Kansas.

The Cleverlys - Blending music and comedy from every performance, these musicians from Stone County, Arkansas, take popular songs from all genres and turn them into Bluegrass hits. They have appeared at some of the nation's top festivals including the CMA Music Fest and the Grand Ole Opry.

Chad Chesmark - Performing magic since he was six years old, Chad Chesmark brings his act of magic and hypnosis to Silver Dollar City. An award-winning sleight-of-hand magician who has performed on major cruise lines, Chesmark is ready to wow audiences during the New Year's Celebration.

Plus, while you're strolling through the park you can enjoy Silver Dollar City's 6.5 million lights, including 1.5 million lights in the Christmas In Midtown light spectacular. Don't miss your chance to visit the place The Travel Channel hailed as "The Most Illuminated Park on Earth" before we close for the season!

Times of the shows will vary.