Missouri’s natural resources are a sight to behold, especially the plethora of springs that abound throughout the state. Here are eight beautiful springs that are worth a drive to visit.

Water Production: 100 million gallons per day
Feeds: Niangua River
Distance:  60 miles east of Springfield
Accessibility: Accessible on foot or by canoe.
How to Get There: From Springfield, take I-44 to Lebanon. Take the second exit onto Highway 64 and continue 11 miles.
Why It’s Great: Bennett Spring at Bennett Spring State Park is a great place to take the kids for the day. Not only does the park contain the spring, but there’s also a trout hatchery operated by the Missouri Department of Conservation where the kids (or kids at heart) can feed the fish. While you’re there, have a picnic, eat at the on-site restaurant or stay the night at the campground.

Water Production: 286 million gallons per day
Feeds: Current River
Distance: 160 miles east of Springfield
Accessibility: Accessible by foot.
How to Get There: From Springfield, take Highway 60 for 150 miles east to the junction of State Route 103. If you cross the Current River, you’ve gone too far. At the junction, turn right onto Route 103, and follow it 4 miles to Big Spring.
Why It’s Great: Big Spring lives up to its name, since it’s the largest freshwater spring in Missouri. Approximately 470 cubic feet of water gush from it every second; this water aids in erosion and contributes to creating caves. Pay attention to the variety of songbirds and wildflowers surrounding the spring during spring and summer months.

Water Production: 222 million gallons per day
Feeds: Eleven Point National Scenic River
Distance: 140 miles east of Springfield
Accessibility: Accessible by foot.
How to Get There: From Springfield, take Highway 60 east. Turn south on Highway 19 at Winona. Continue on Highway 19 for approximately 16 miles to the Greer Spring Trailhead.
Why It’s Great: The spring originates from two separate outlets in the middle of a deep ravine. Wildflowers are in abundance from March to mid-June; you can take these in on the nearly 1-mile hike to the spring.

Water Production: 100 million gallons per day
Feeds: Meramec River
Distance: 230 miles east of Springfield
Accessibility: Accessible by foot.
How to Get There: Located 6 miles east of St. James on Highway 8.
Why It’s Great: Native Americans first told of the spring, touting to businessmen descriptions of the surrounding tall trees and colored earth. Their reports led to the beginning of Maramec Iron Works, which was open from 1826 to 1876. At its peak, the town had a population of 500 people. Today, visitors can see the spring and ruins from the town or even visit during Old Iron Works Days in October.

Water Production:  90 million gallons per day
Feeds: Current River
Distance: 150 miles east of Springfield
Accessibility: Accessible by foot.
How to Get There: From Eminence, head east on Highway 106 for 14 miles. Turn right into the Powder Mill campground. At the far end of the campground, look for a trailhead sign for the Powder Mill/Blue Spring Trail. Follow the trail to Blue Spring.
Why It’s Great: Once known as “Spring of the Summer Sky” by Native Americans, Blue Spring rises in a cave at the base of a bluff along Current River. With a depth of 300 feet, it’s the state’s deepest spring, but it’s also the one with the bluest water. Visitors can still see remnants of a concrete dam that was built in 1937, as well as colorful warblers and kingfishers along the spring branch and the river.

Water Production:  81 million gallons per day
Feeds: Jacks Fork River
Distance: 138 miles east of Springfield
Accessibility: Accessible by foot.
How to Get There: From Springfield, take Highway 60 about 120 miles east to State Route 19 in Winona. Turn left on Highway 19. Follow it 12 miles north to the intersection of Route 106 in Eminence. Turn left on Route 106 and go 6 miles west to Alley Spring.
Why It’s Great: Alley Spring’s beautiful, turquoise water once played an integral function at nearby Alley Mill, and a rock dam still keeps the spring’s waters at bay. While you’re there, visit nearby Rocky Falls Shut-In, a steep cascading waterfall that is great for summer swimming.

Water Production:  78 million gallons per day
Feeds: Current River
Distance: 180 miles east of Springfield
Accessibility: Accessible by canoe or by foot.
How to Get There: The spring is located 2 miles north of Akers on Highway K. There is a sign, and then a dirt road. If traveling by foot, park by the river and walk about a mile up a trail along the river to reach the spring. If you’re going by canoe, put in at Cedargrove, and you’ll pass it on the left fairly quickly.
Why It’s Great: Welch Spring was previously known for its medicinal qualities. In 1913, Dr. C.H. Diehl bought the spring and operated a hospital dedicated to the needs of asthma patients. He believed the water’s healing properties and the cool, pollen-free air from a nearby cave would be a great combination. Although the hospital had closed by 1940, visitors can still see the remains of the hospital overlooking the spring.

Water Production: 26 million gallons per day
Feeds: Current River
Distance: 145 miles east of Springfield.
Accessibility: Accessible by foot or by canoe. If you float, pull off at the third Round Spring landing and walk through the campground.
How to Get There: From Springfield, take Highway 60 about 120 miles east to State Route 19 in Winona. Turn left on 19, and follow it 25 miles north to the Round Spring. It’s located right on Route 19, about 12 miles north of Eminence.
Why It’s Great: The waters of Round Spring flow into a circular, collapsed cavern, and are at their bluest hue in the midst of a drought. A historic note: The original town of Eminence, Missouri, was located nearly a mile downstream, but it was destroyed during the Civil War. In a preservation effort, court records were hidden in a nearby cave, which became known as Courthouse Cave. After visitors are done observing the spring, they can tour nearby Round Spring Cave between Memorial Day and Labor Day on a lantern-led tour by the National Park Service.

Falling Spring is worth the hunt to find it because it looks so much different than the others. We couldn’t dig up water-production stats on this unusual spring, but it’s a gorgeous sight to see.

This spigot-like spring pours from a bluff in Mark Twain National Forest. People have been flocking to the spring since the mid-1800s, when the first community of homesteaders built several cabins nearby. To find it, look for the very small brown sign that points to the spring, which is located just across the Oregon County line off of Highway 19. 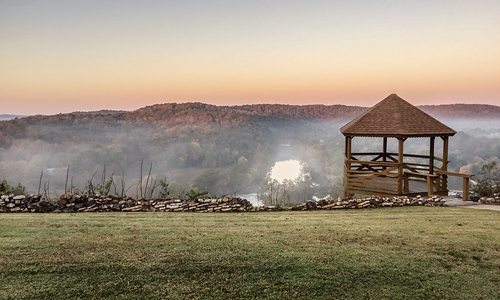 Spring for a trip to Hardy, Arkansas

Historic Hardy is a mini-mecca of antique and art shops. It’s a great place to stop on the road to Memphis, but with easy access to river...

The mercury is starting to creep up, which means it’s time to gather the family, hit the road and make a splash at one of these gorgeous... 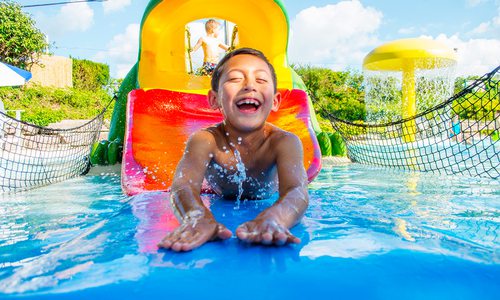 Cool Off at These Nearby Waterparks

Splash around at these waterparks in the Ozarks and beyond. Head down to Branson to visit White Water and Splash Country Resort, cool off...