Over the course of two years, Erica Lea Design and her team took on extensive renovations that doubled the footprint of this Hollister, Missouri property, transforming it from a modest family home to an impressive estate overlooking Table Rock Lake. 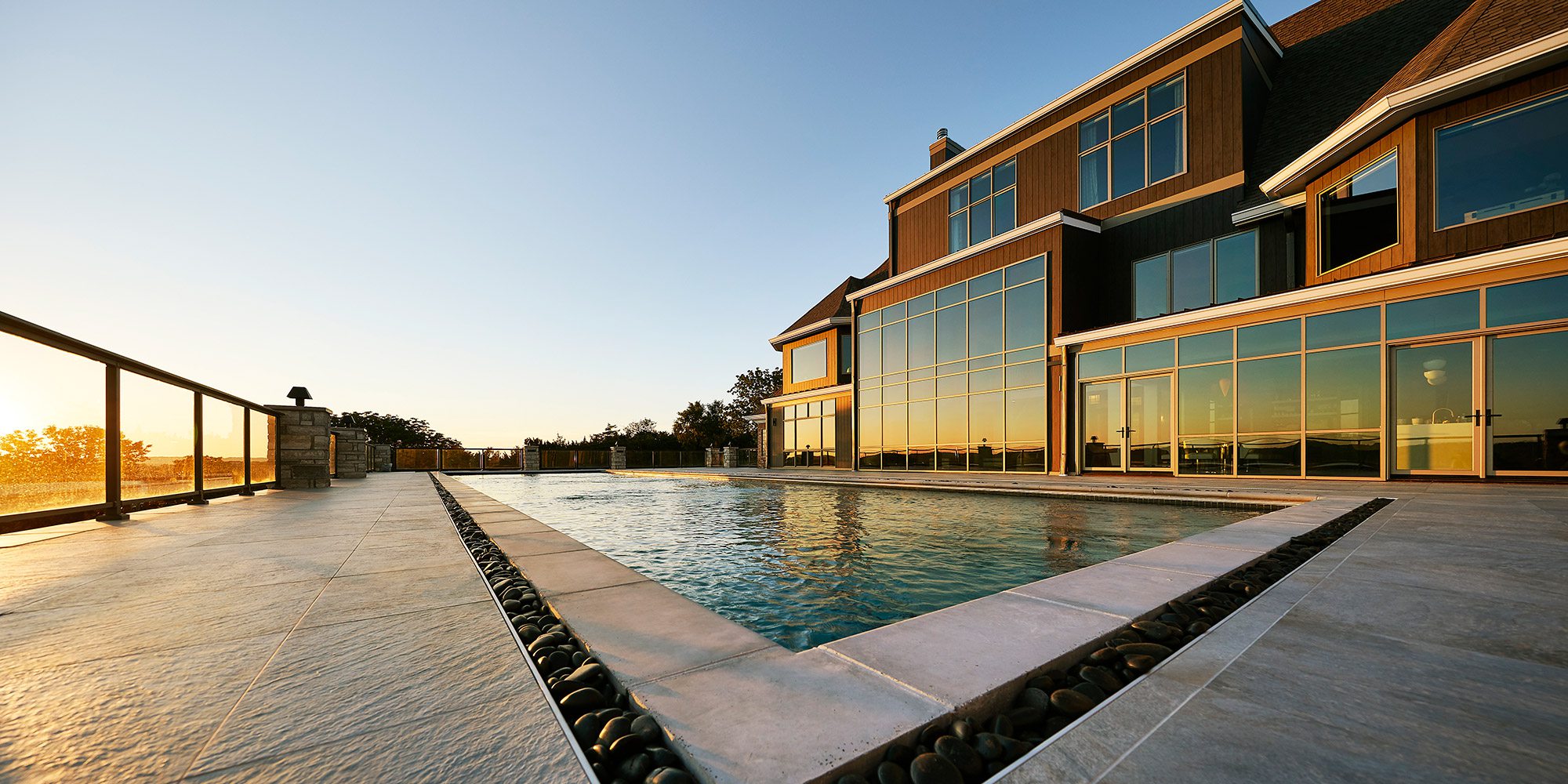 Photo by Starboard & PortWith up to 20 guests at a time in the summer, an impressive pool was non-negotiable. This lap pool is a nod to the homeowners’ backgrounds as swimmers. “The trough has different elevations in it, so when water splashes over the pebbles, it drains out,” says designer Erica Hendrix. The porcelain tile decking aligns with interior flooring for a seamless transition. “The details give you the extra wow factor you don’t notice, but you feel,” Hendrix says.

Although this home is known to many as the former residence of Wayne Newton, the owners of this stunning property simply regard it as home. Situated on six acres off the banks of Table Rock Lake, the 23,000-square-foot estate boasts three floors containing nine bedrooms, 12 bathrooms, two kitchens, an office, several bonus spaces and an outdoor pavilion with sizable pool. However, the layout wasn’t always like this. 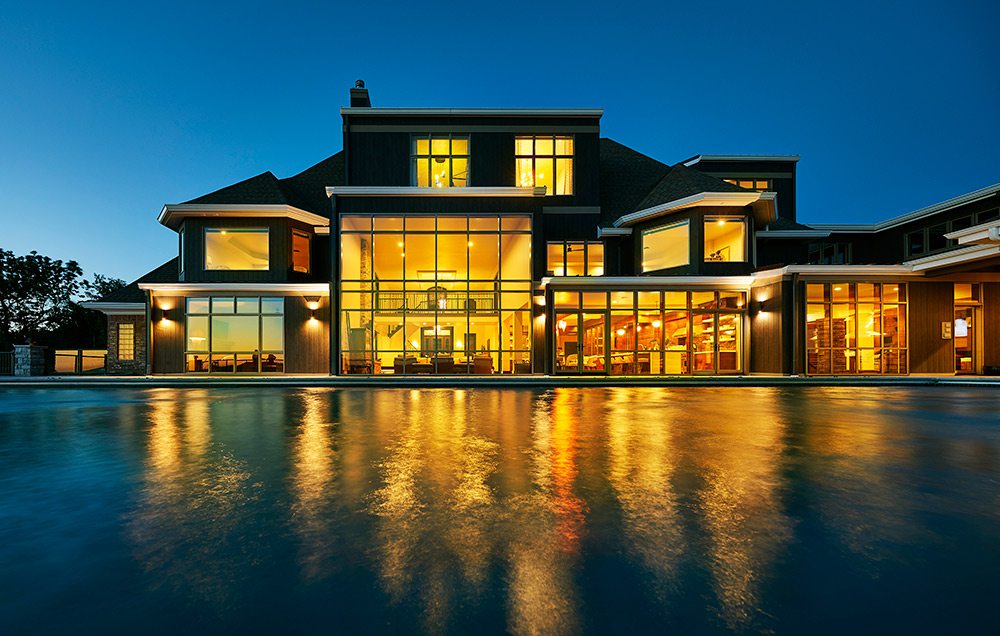 Photos by Starboard & Port CreativeThis curtain wall of windows on the backside of the house was the builder Brent Brokaw’s solution to welcoming in the greatest amount of natural light possible. The fenestration consists of glass panels combined with durable Trespa siding, overlapped vertically using a rainscreen approach, where there is an air gap between the siding and housewrap to protect the home against water damage. “Because of the way it’s assembled, water can get on the siding and behind it and not hurt the walls,” Brokaw says. 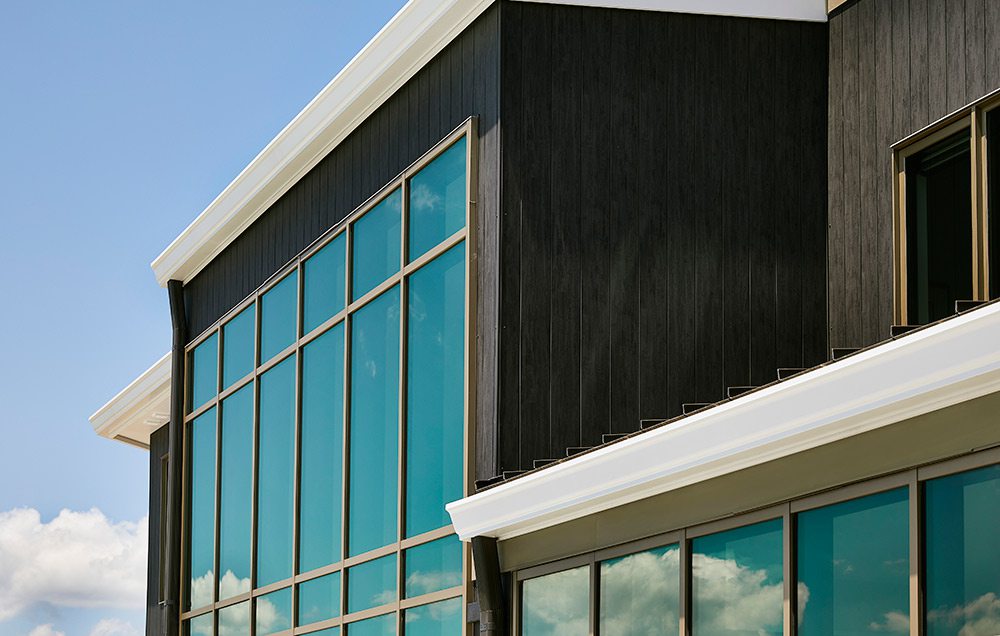 Photos by Starboard & Port CreativeAn up-close look at the living room window from outside showcases the rainscreen method used to install UV-resistant siding. Vertical mounting is the perfect choice because few homes in the area have it, Brokaw says, and because it subtly complements parallel lines found in the window grid. 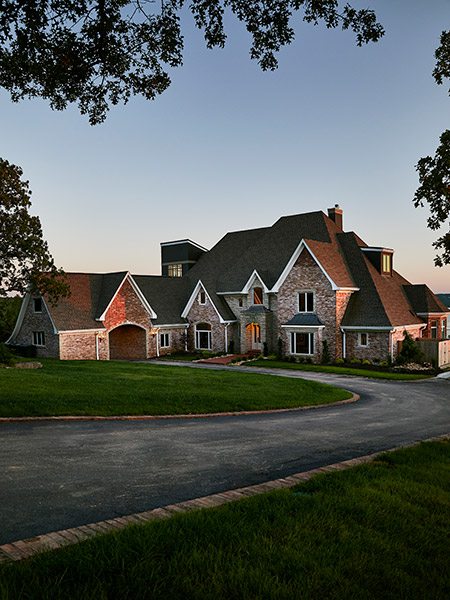 Photos by Starboard & Port CreativeSitting on six acres, the home’s front facade remains the same as when it was first built, with the exception of a stair tower to the left of the entrance and third-floor dormer installed during the remodeling process. The jaw-dropping expansion project in its entirety is best viewed from the lakefront side, where craftsmanship, creativity and attention to detail truly shine.

“When I first met with the homeowner, she told me she wanted to remodel her home, which was about 11,000 square feet,” says Erica Lea Hendrix, owner and lead designer of Erica Lea Design Studios. “I didn’t realize we were going to be gutting it first, then remodeling and adding on. We essentially rebuilt the entire house."

Originally constructed in the mid 1990s, the old floor plan didn’t meet the specifications of the homeowners, and although another couple had renovated the home prior to the current owners taking possession, the updates were now in need of updating. But the location, with its breathtaking panoramic views, was idyllic, and the homeowners knew Hendrix and the right team could transform the property into exactly what they envisioned. With three grown children living in three different states, one spouse working out of state and an aging father-in-law they planned to make a permanent resident, the place needed to be comfortable enough for daily living and traveling guests, yet still exude contemporary, high-end design. 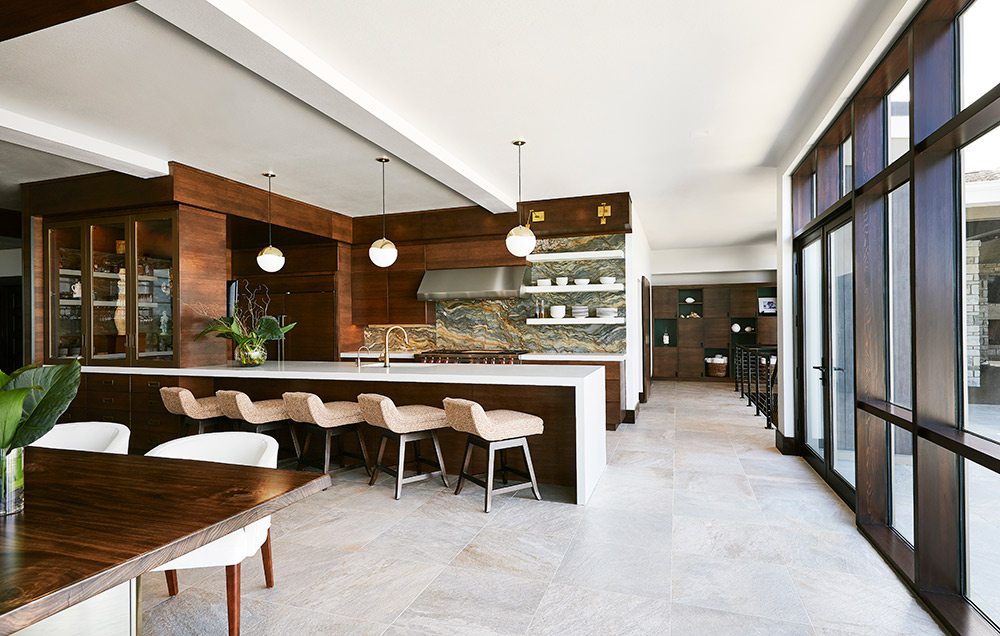 Photos by Starboard & Port CreativeFrom this vantage point, the eye glides across the breakfast bar into the kitchen due to the clean lines and bare spaces that were fundamental to the project’s overarching design. “I can’t stand clutter,” says the homeowner. “That’s why there’s this kitchen and then a galley kitchen behind it where people can drop off their food and bags and stuff when they come over. It’s a little hidden gem that I love.” 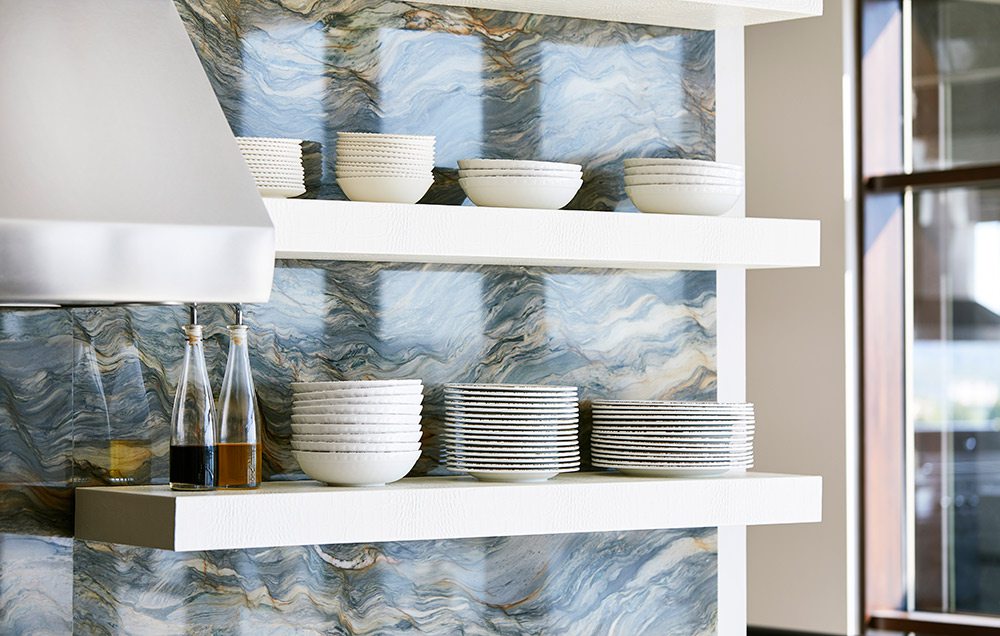 Photos by Starboard & Port CreativeDaylight from windows overlooking the pool dances off the undulating swirls of the kitchen’s hard-to-acquire granite backsplash, which came with an unforeseen predicament. “During construction, it fell off the wall and broke,” Hendrix says. “I had a panic attack thinking we’d never be able to replace it, but we were able to fix it along a fissure, and now you can’t even tell that happened.” 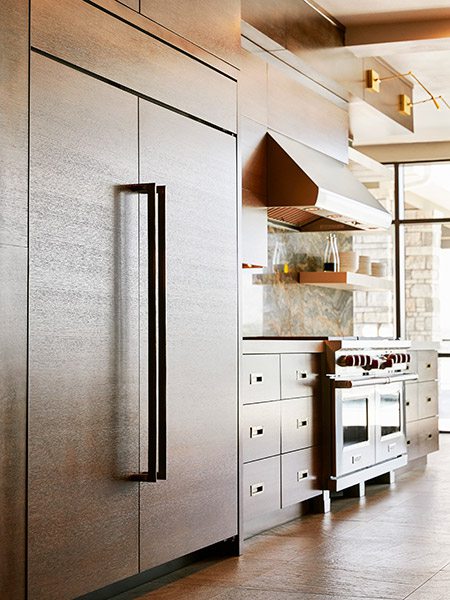 Photos by Starboard & Port CreativeIdentical to those in the bar area, walnut-stained cabinet panels bring warmth to one of two kitchens. This is the full kitchen, used to prepare family dinners and entertain friends. Designed to blend in but large enough to stand out, a 72-inch-wide Sub-Zero refrigeration system guarantees no one ever goes hungry. 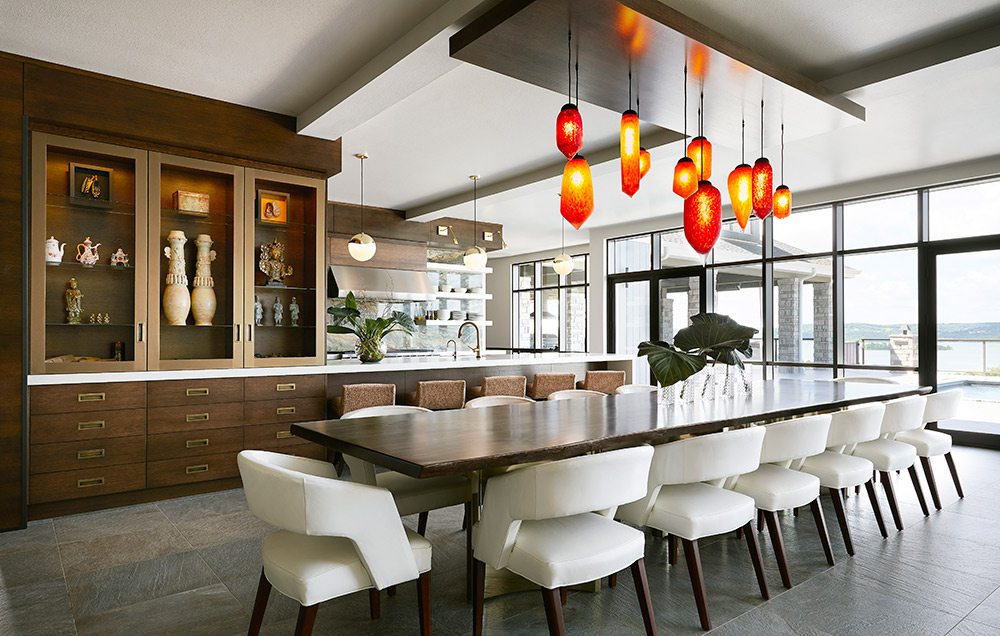 Photos by Starboard & Port CreativeGuests get a taste of local flavor when seated around this enormous dining table. The top is a 15-foot-long, raw-edge slab of bur oak taken from the Liberty Tree, a Branson landmark until arborists deemed it hazardous and forced its fall several years ago. 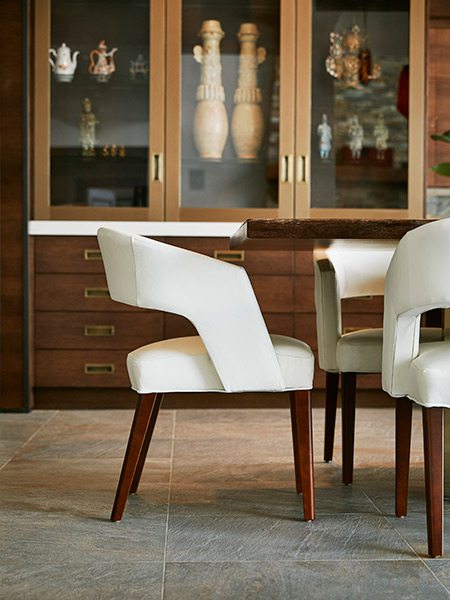 Photos by Starboard & Port CreativeThe shape of these modified barrel-back chairs is a fitting complement to a pair of urns one of the homeowners fortuitously purchased during a trip to Hong Kong. “I picked them up on a whim because I thought they were cool, and then I was told they are from the Ming dynasty,” she says. This may date them to as early as the 14th century.
“We wanted everyone to always have somewhere to come to no matter where they are,” says the homeowner, who prefers to remain anonymous. “But we knew if we wanted to live in it and use it like that, we needed to make some changes."
Hendrix joined forces with Mark Critchfield, founding principal of Mainline Group Architecture Inc., and Kent Brokaw, owner of Branson Builders Contracting Inc., to plan a new design that ultimately doubled the home’s footprint, increased functionality and modernized the interior aesthetic. 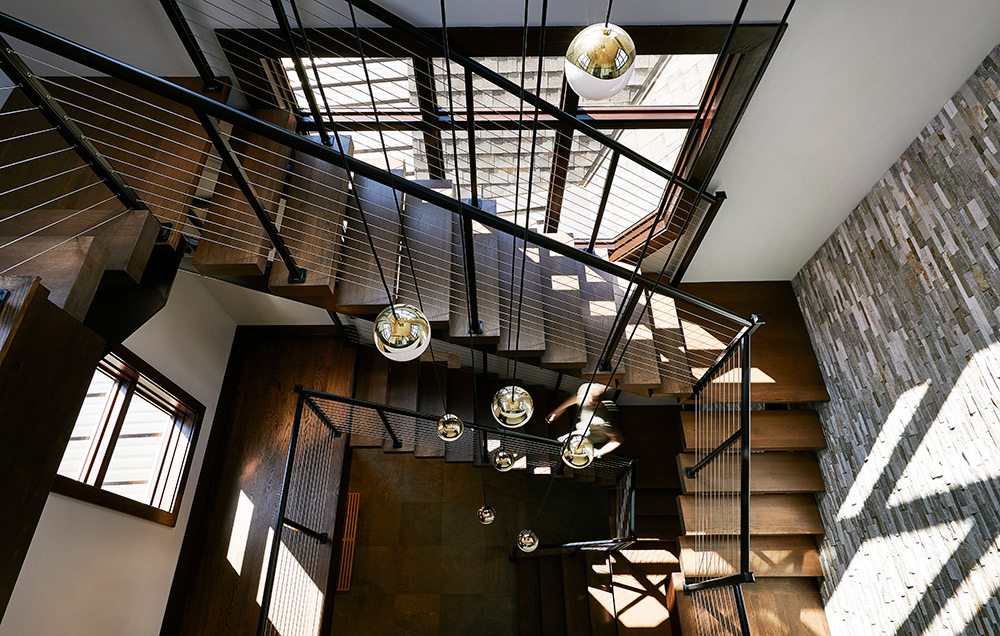 Photos by Starboard & Port CreativeGazing down from the highest level of the home, the dramatic presence of a stair tower commands attention. The tower was erected on the property’s northeast side to allow easy access to newly constructed bedroom suites on the third floor, as well as the roof. 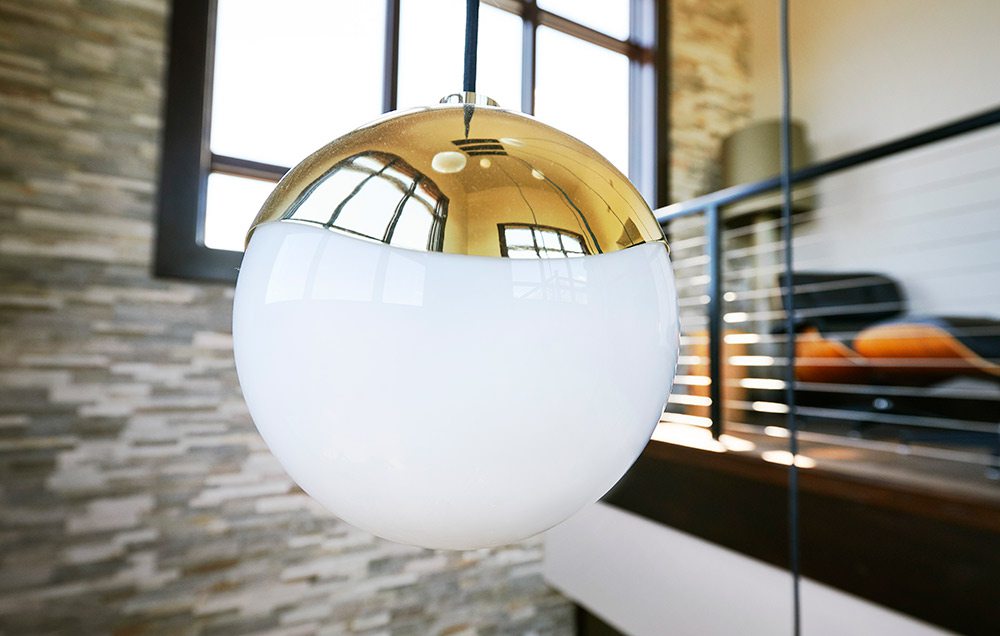 Photos by Starboard & Port CreativeA secondary view of the lights in the stair tower reveals polished gold caps that reflect the sun’s rays. Although the tower is enclosed, large picture windows on all four sides provide an open, airy feel by day and a soft, moonlit feel by night. 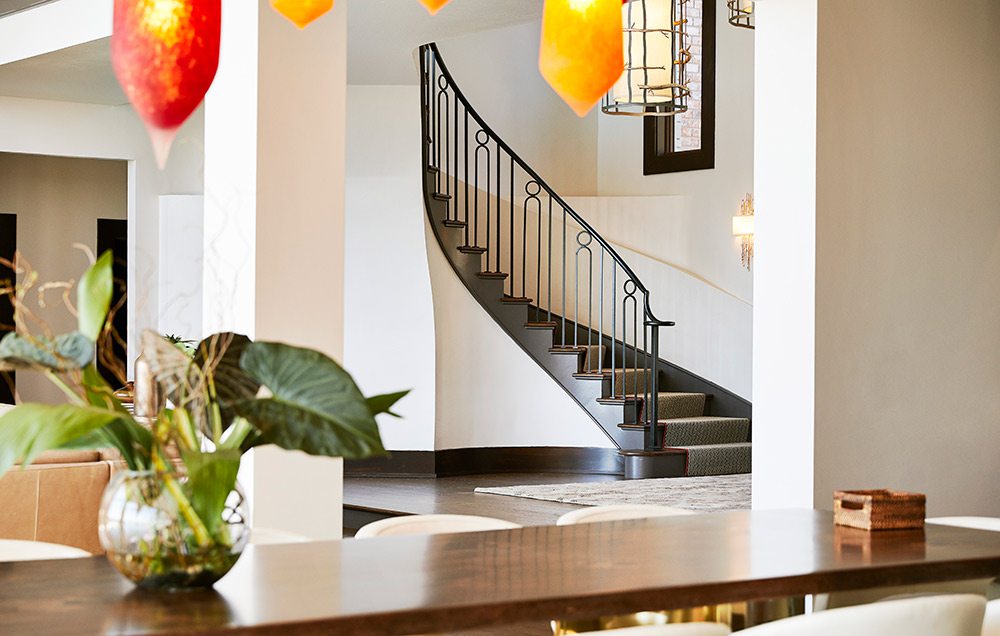 Photos by Starboard & Port CreativeA revamp of the formal staircase that was part of the original home required on-site welding due to its unusual radius. Custom built “people pickets,” as Hendrix refers to them, lead guests to the second floor and add a whimsical touch to the metalwork. 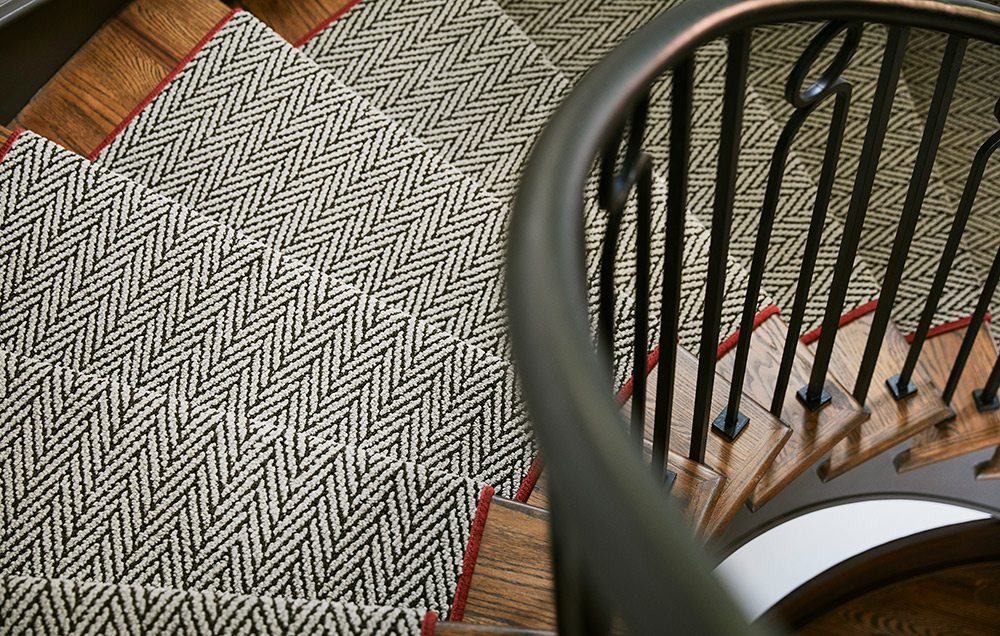 Photos by Starboard & Port CreativeGeometric-print carpet lends a textural element to polished white oak flooring. Its vibrant orange binding resembles similar accent pigments found elsewhere in the home.
“Every part of this project was unique—the stair tower, the largest residential curtain wall of windows ever installed by the company that did it, how the water dissipates from the building no matter how much rain you get,” Brokaw says.
There were several other notable components exclusive to such a sizable undertaking. The two biggest challenges for the builder and the budget were creating an entire third floor out of an existing attic and figuring out how to install two different types of outdoor decking flush with each other on top of a concrete foundation poured 24 feet above the lake’s shoreline. 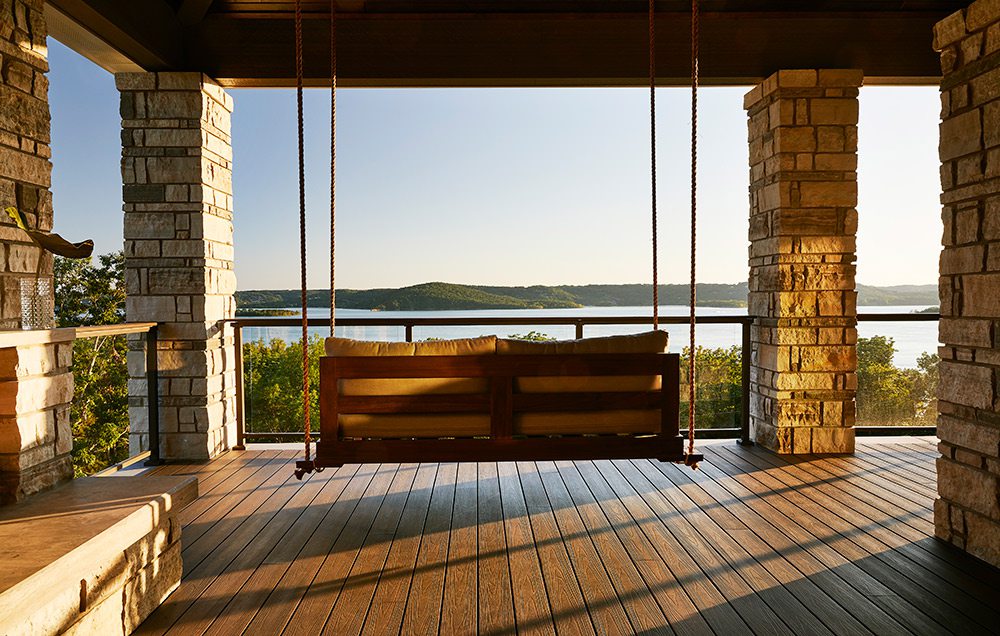 Photos by Starboard & Port CreativeImagine napping here while the evening breeze blows or curling up with a blanket and a glass of wine to watch the sun set. This hanging swing bed is the quintessential spot for relaxing—no matter how you choose to do it. 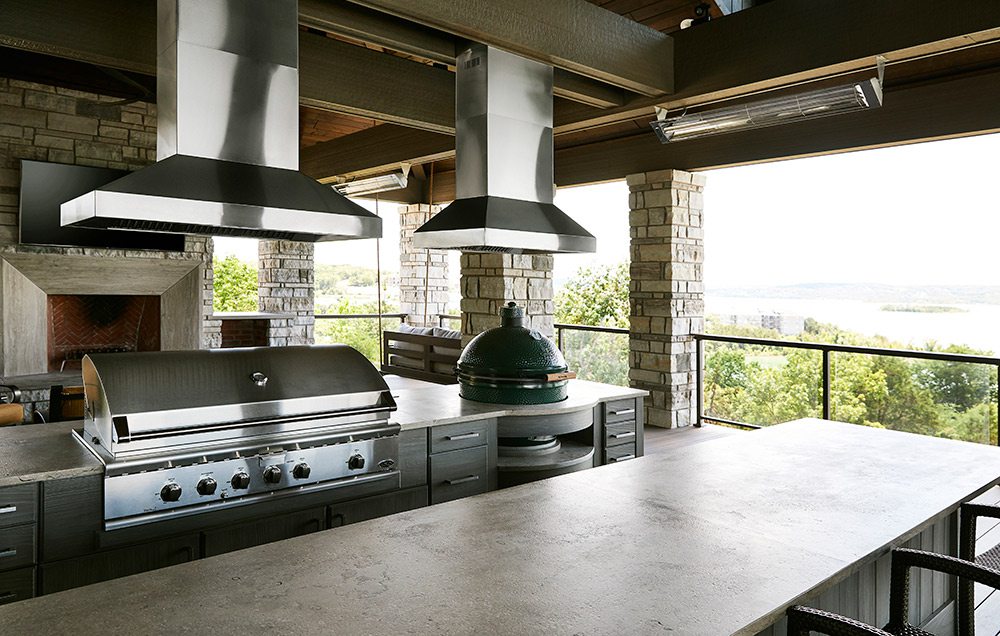 Photos by Starboard & Port CreativeEven a dreary day doesn’t prevent these homeowners from enjoying their outdoor kitchen. Whether they are entertaining a crowd or spending an intimate night alone, every meal is prepared using top-of-the-line appliances and amenities. And with such a sweet view of the lake, there’s never a need for dessert. 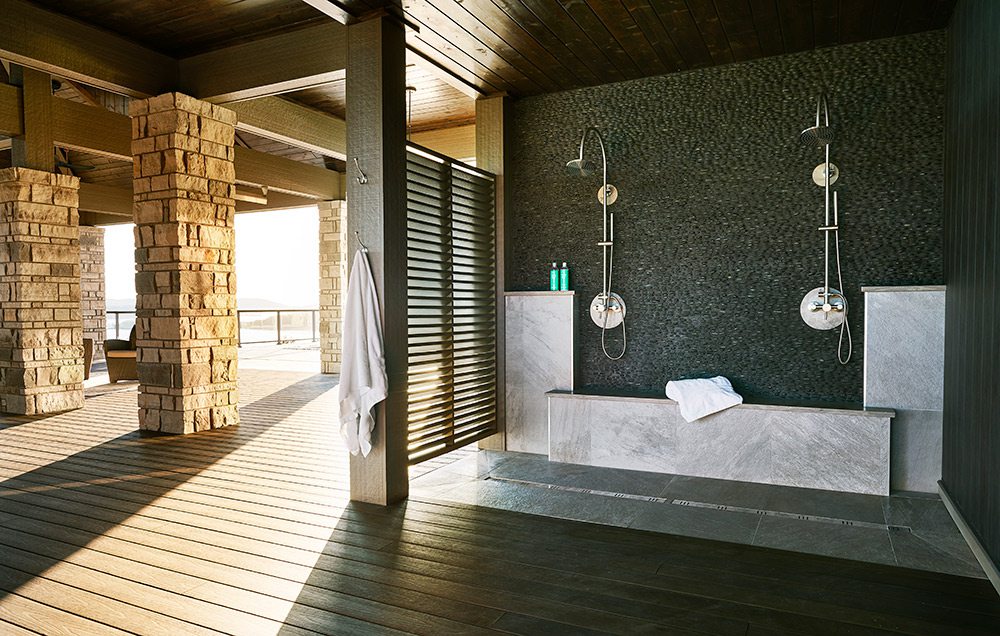 Photos by Starboard & Port CreativeStanding pebble tile in the outdoor shower conjures up the notion of skipping rocks on the lake, while its beauty makes getting clean less of a chore and more of a reward. “We live out there in the summer,” says the homeowner. “No one even showers inside.”

“When you’re excavating, there are lots of hidden costs, but that’s normal if you want to do it right,” the homeowner says.

Since this past summer, two years after the homeowners first saw blueprints of their dream home, all the dirt and machinery has disappeared, and family and friends are gathering under one renovated roof. Now, there is more than enough space and luxury for everyone to enjoy. 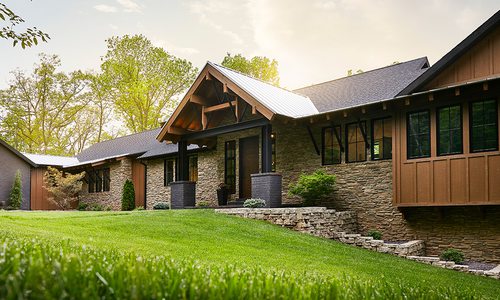 Our annual Homes of the Year winners revealed! We asked local southwest Missouri builders and designers to submit their best work from the... 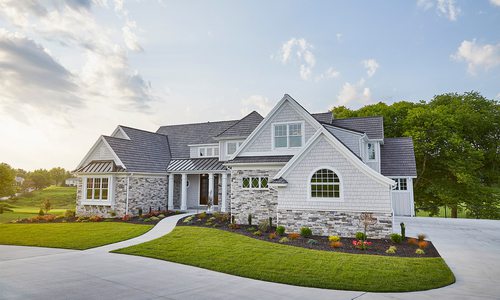 A Classic Home with a 21st Century Twist

As soon as Erica Lea Hendrix got to join the team that created this color-infused, transitional Nantucket, she knew she was in for a treat. 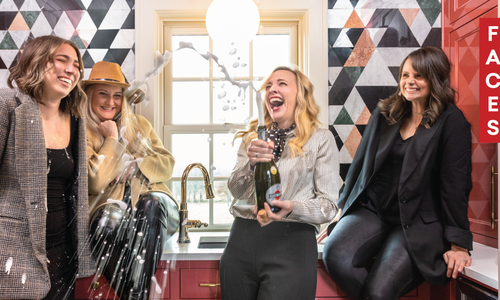 The Face of Lux Interiors