In an effort to tap into her family history, 417 Magazine’s Assistant Editor Ettie Berneking heads out on her very first bird hunting trip. Read about her adventure, and make plans to try it out for yourself. 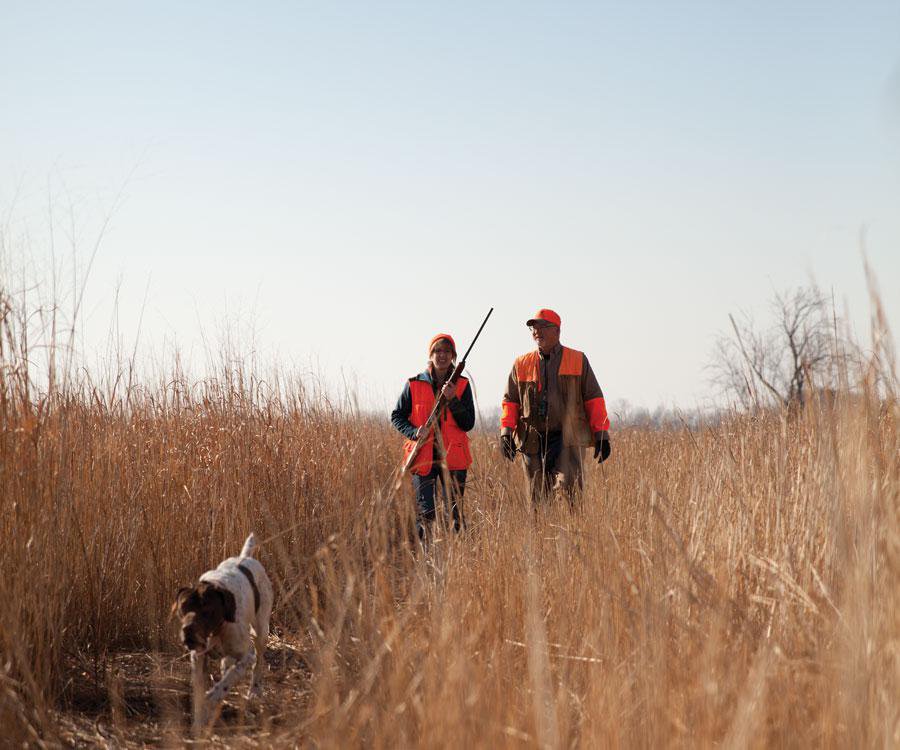 Even the cup of extra-strong coffee and several pep talks on the drive there hadn’t settled my nerves for the afternoon that was about to unfold. It might have had something to do with the hunter-orange vest that was in my back seat, but it probably had more to do with the 20-gauge shotgun resting in the trunk of my car.

Before you go hunting, you first have to complete your hunter-education certification program.
Click here for more info.

1. Good walking boots
2. A water bottle
3. A hunting vest with pockets for shells and casings
4. Your hunter’s permit or license
5. Layers of warm clothing. Even with plenty of walking around, it can still be chilly out this time of year, and the day starts early.

I had been told I would be going bird hunting several months before I loaded my brother’s shotgun and a case of shells into my car. It was the kind of assignment that really gets me pumped and reminds me why I love my job so much: It’s unpredictable. But underneath all that excitement, there was a definite sense of dread. I had never hunted before. In fact, I’d never even shot a gun before.

That might not sound too shocking. There are plenty of people out there who have never handled or fired a weapon of any kind. But in my family, that’s not the case. I grew up around hunters. You name it, and they’ve brought it home: deer, quail, turkeys, pheasants, squirrels. The list goes on. One year, I remember my dad, brother and grandpa talking about the troublesome otters they had sniped from their tree stands. Apparently, the otters were destroying the fish ponds on my uncle’s property, and those furry little bastards had it coming.

But despite being surrounded by the sport of hunting and having every opportunity to pick up the trade when I was younger, I had yet to be brought into the fold. So when our editor said, “Okay, Ettie. You’re going bird hunting,” I knew this was going to be a big deal. And it was. When I phoned my dad later that night to ask him if I could borrow one of his shotguns, he sounded thrilled. A few hours later, I got a call from my mom letting me know my dad was in the process of buying me my own shotgun. Like somehow, this one assignment was going to turn me into a full-fledged hunter. Soon I’d be wearing only hunter-orange and would have several mounted racks hung above my bed. But one quick call to my dad straightened that out.

I had no plans of owning my own gun. Instead, I would be using the Remington 1,100 semi-automatic shotgun that had been passed down from my grandpa to my dad, and finally to my brother. This gun is practically a family heirloom. My dad first used it when he was just 12 years old and already quail hunting with my grandpa. 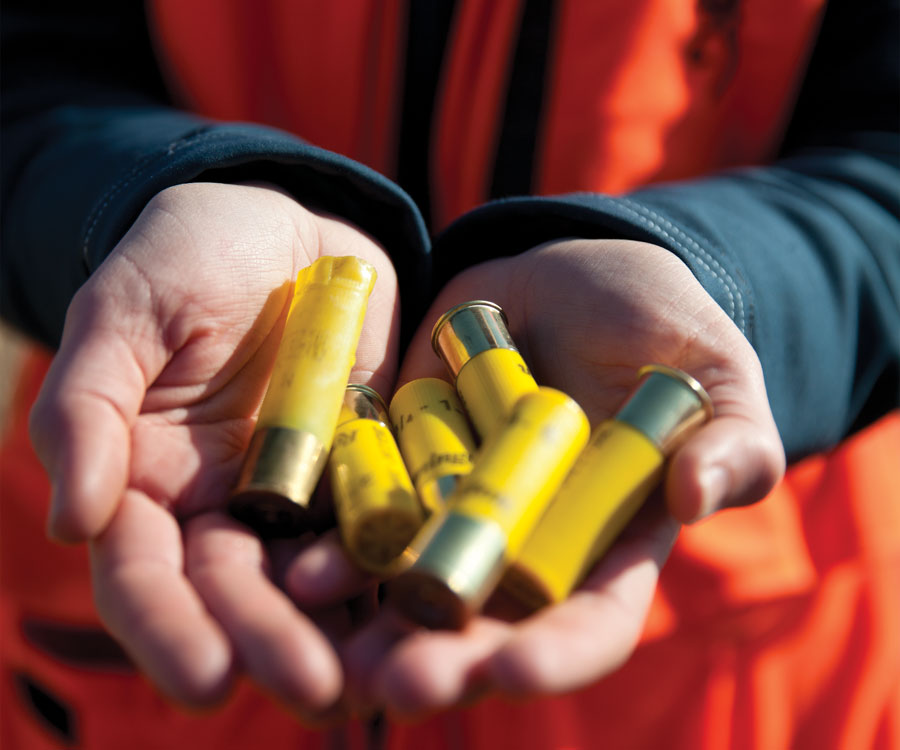 With a shotgun locked down, I next started researching bird hunting operations in 417-land. There are some seriously impressive and seriously expensive options out there. But when I found Flying Feathers Game Bird Hunting, I was sold. This family-run business is located just a short drive west of Springfield in Lockwood, and there’s a whole range of hunting packages to choose from. Whether you’re looking for a whole day of hunting or a European-style shoot where you’re positioned at designated shooting stations, the pro marksmen at Flying Feathers can accommodate.

“The first time my dad handed me that beloved Remington, I could feel my stomach turn to knots.“ —Ettie Berneking

When I called up co-owner Marsha Lilienkamp to learn which hunting package would be best for me, we settled on the classic hunt, which rings in at $160 per shooter. This half-day hunt includes your choice of 10 quail, six chukar or four pheasants. Every hunt here, no matter which package you go with, includes trained bird dogs and an experienced guide. Since I was a 100-percent novice, Marsha suggested I go with the chukar. Apparently, these little feathered friends aren’t as fast or sneaky as the quail or pheasant.

I hung up the phone confident that I could do this. But then I Googled chuckar, and my heart sank. I’m a huge animal person. Friends often get fed up with me because I’ll get completely side-tracked from our conversation just because a cute squirrel ran by. And these bulbous little chukars, with their black eye masks and bright orange beaks, were just plain adorable! How could I shoot and kill one of these? That dread that I felt when getting this assignment was back. 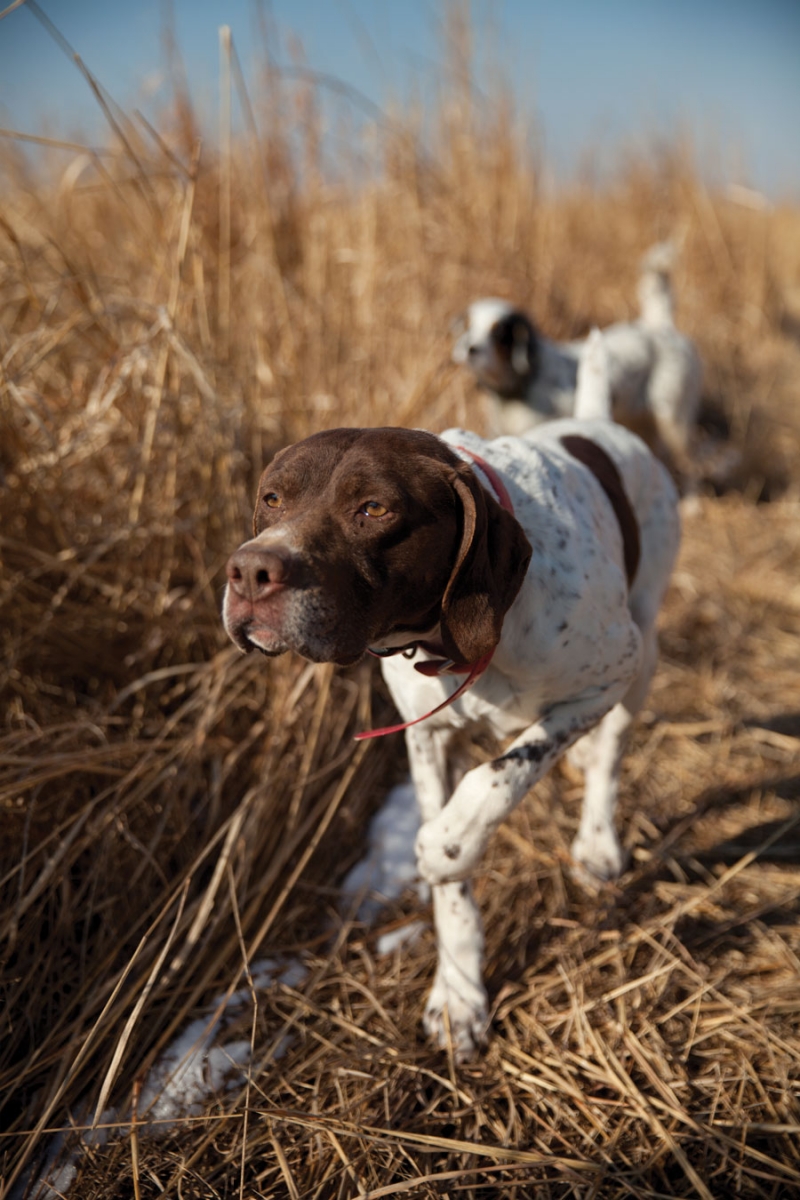 With several months before the big shoot, I decided to practice with my dad and brother. We loaded up the truck and headed out into one of the grassy fields by my parents’ house. We took turns throwing clay pigeons, and by the end, I wasn’t terrible. I even managed to shoot a few of the bright orange clay disks. It was definitely a learning process, though.

The first time my dad handed me that beloved Remington, I could feel my stomach turn to knots. But with careful guidance, he showed me how to line up my target and follow the bird through the air even after I had pulled the trigger. We went through how to load and unload the gun. How to check that the safety was on and how to always point the gun in the air when I wasn’t ready to aim and fire. Then it was time to shoot. It wasn’t the kickback that scared the living daylight out of me. It was the power that rocketed from the barrel. It was the noise of the powder igniting. It was the knowledge that I was holding deadly force in my hands.

But as I got more comfortable with the gun and all the safety precautions and saw how skilled my dad and brother were at taking down the clay birds that soared through the air, I started to understand the appeal of hunting. There’s definitely an art to this, and while I was far from becoming the next Van Gogh of bird hunting, I was at least able to hit the targets.

During the next several weeks, I continued to practice shooting, and when the big day finally arrived, I felt ready. But as I buttoned up my thick flannel jacket and slid the Remington into my trunk, the dread was back. Up until this point I had only obliterated clay disks. Now I was about to shoot a living, breathing thing, and there would be several dogs, my guide and our staff photographer, Kevin O’Riley, there to see it. I was pretty sure that if I accidentally took out Kevin, there would be problems back at the office. 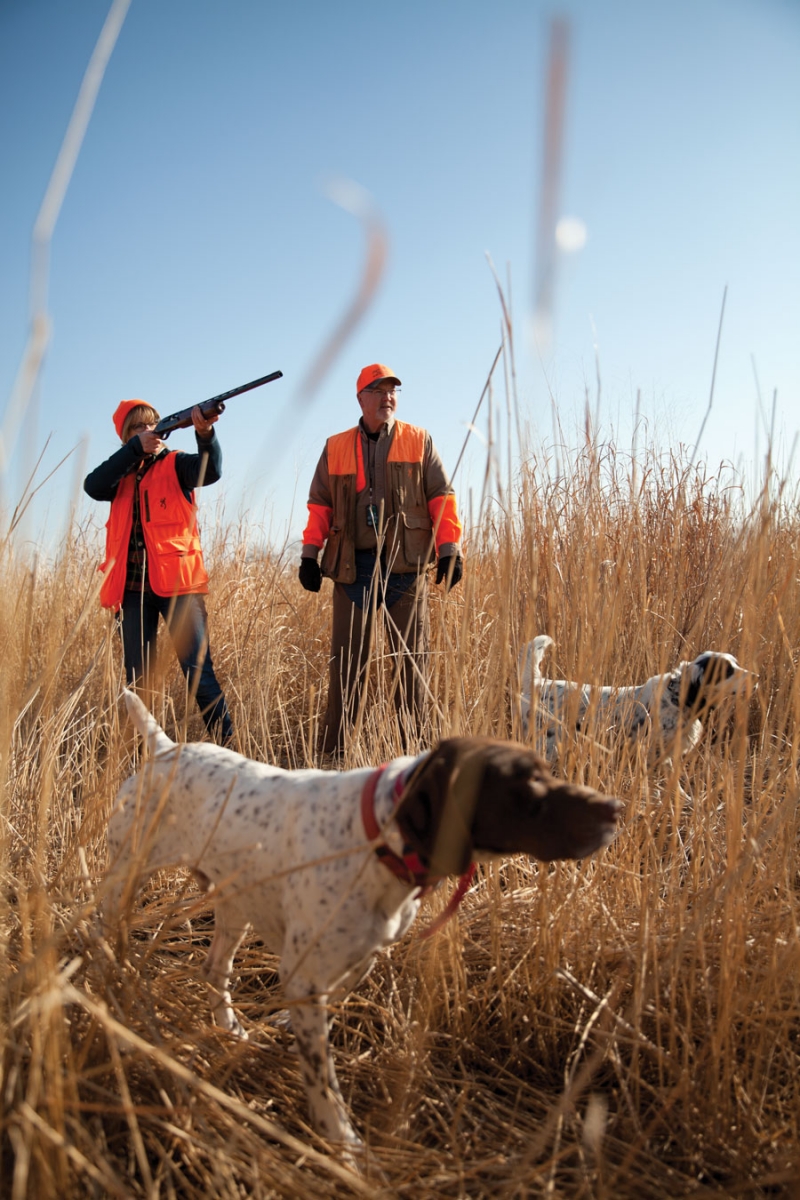 When I finally rolled up the gravel driveway at Flying Feathers and met my guide, co-owner Bruce Lilienkamp, I had dissolved into a ball of nerves. I’m sure it showed, since Bruce spent extra time going over all the safety protocols for our shoot. Rule No.1, keep the safety on until the dogs had spotted the chukar and Bruce could get a visual lock on the bird. Rule No.2, keep the barrel of the gun pointed at the air at all times unless shooting. Rule No.3, when Bruce said “Stop,” stop!

Even though Bruce and Marsha have been running Flying Feathers for 15 years, there’s always a risk that something could go wrong. In fact, Bruce’s hunting dogs have been accidentally shot in the face before when a hunt went terribly wrong. After being schooled in Bruce’s hunting rules, I slid two rounds into the Remington, pulled my hunters-orange cap down over my ears and followed Bruce and the dogs out into the tall, grassy fields.

Watching the dogs work was easily my favorite part of the day. We had three beautiful pointers with us. Two were English setters and one was a German shorthair. Bruce and Marsha raise and train all of their dogs, and Bruce has developed a system to get the dogs to heel when he calls or hold when they spot a bird. And when they do spot a bird, it’s incredible to watch.

Suddenly, all the rapid movement in the tall grass stops, and the dogs become as rigid as stone. Whichever dog finds the bird first becomes the lead dog, and the other two silently line up behind him. As we moved closer to the lead dog, the other dogs moved with us. Bruce showed me how to walk side-by-side with the dog farthest back in the line. This way, all dogs stayed ahead of the gun and were visible to me, the shooter. Then when the time was right and Bruce was able to see which way the bird was positioned, he flushed it out of the brush and into the air for me to shoot.

Time and time again, I shot and missed. Even with all that dread settled in the pit of my stomach, my competitive edge was kicking in, and I wanted to shoot one of those tiny birds. So after spending several hours watching the chukars fly away, I was getting frustrated. Then, the dogs suddenly found another bird. Bruce positioned me and flushed the fowl into the air, but instead of flying straight, it turned and looped behind Bruce and Kevin. If there was ever a time when I was at risk of accidentally shooting the other members of my hunting excursion, this was it. But somehow, my instincts took over, and all I could hear was Bruce yelling at me to raise the barrel and shoot. With the handle of the gun pressed firmly into my shoulder, I took aim, lifted the barrel into the sky and over the heads of Bruce and Kevin and pulled the trigger. In an instant, there were feathers everywhere. 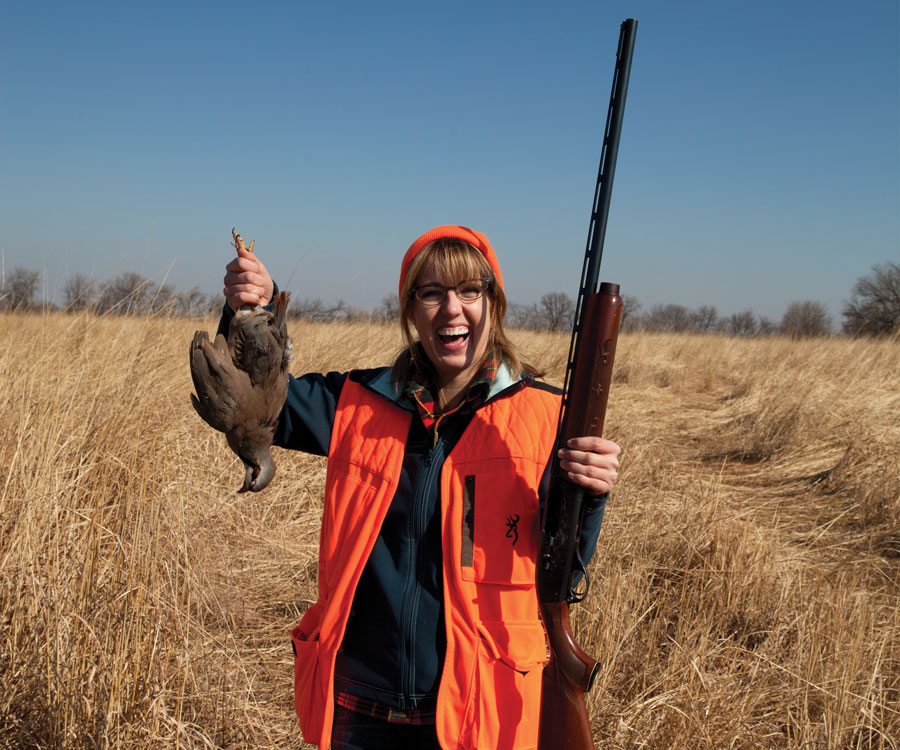 I screamed. A lot. Instead of feeling horrible for the bird, I felt a rush of adrenaline and excitement burst through me. I was so proud of myself. I’m not ashamed to admit that there might have been several jumps in the air and a few embarrassing dance moves that followed my victory.

As we rounded up the dogs and headed back to the house for lunch (which is prepared each day by Marsha), I couldn’t stop smiling. All I wanted to do was head back into the field and keep hunting. I must have called everyone in my family to tell them about the good news.

By the end of the day, I had killed two chukars, and Kevin even got to shoot and was able to down one bird. It might have been a very small hunting victory, but it was still a win for me. With the birds cleaned and bagged and securely loaded into my car, I drove home with a new appreciation for all that power that was packed into that old Remington, and I’m happy to report that the dread had faded away. Maybe my dad was right, and I will regularly don that hunters-orange cap. 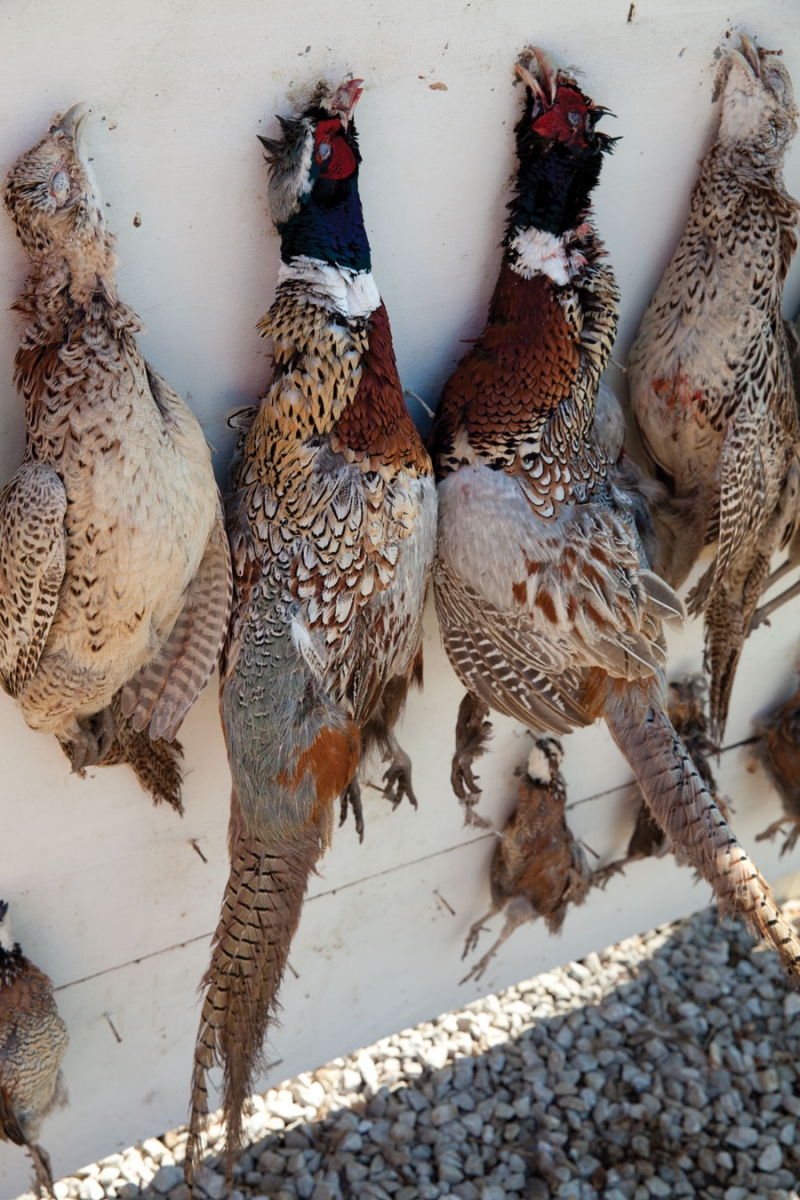