The Mansfield native has performed in operas all over the world, and is now artistic director of Springfield Regional Opera. 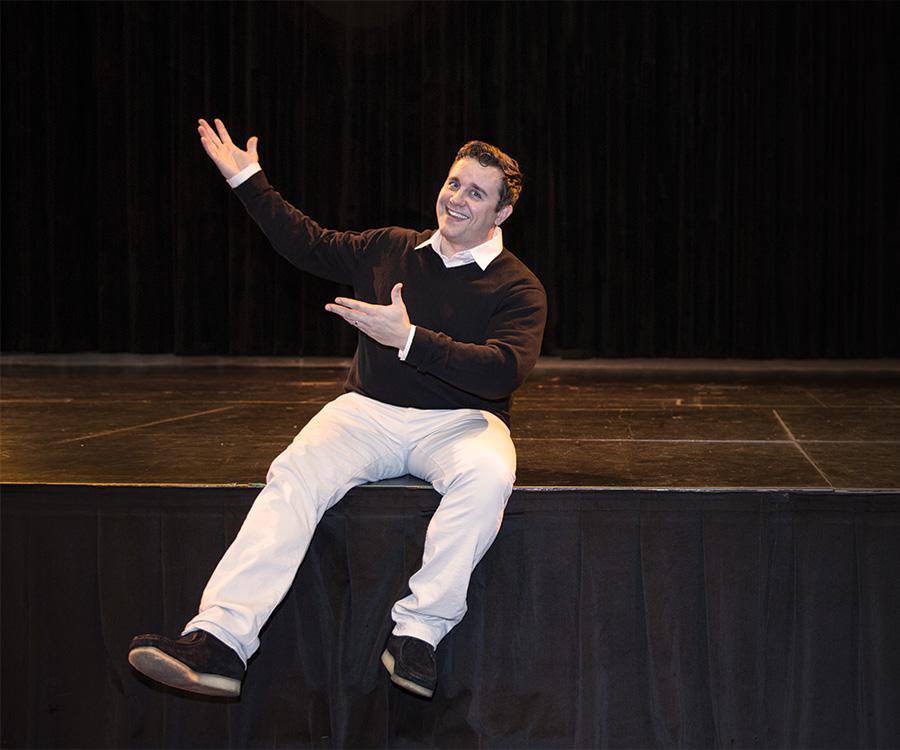 Michael Spyres spent his childhood in Mansfield singing at every town wedding and funeral with his musically-inclined family. He became interested in opera because he was named after an uncle who aspired to be an opera singer but died at a young age from throat cancer. His mother and father were both music teachers, and he grew up on stage. After landing his first role at the Springfield Regional Opera when he was 18 years old, Spyres found his way to Europe at age 24. Now, in addition to his singing career, he has come back to take over the artistic direction of the opera company that gave him a shot—and he’s bringing innovations that could usher in a new era in opera.

417 Magazine: Why did you decide to come back to SRO while continuing your career in Europe?
Michael Spyres:The big reason I wanted to come back was to help out the company that gave me the first chance. I wouldn’t be in this position without having had the opportunities that I had in Springfield. By the time I was 22 years old, I had already done six roles in a real opera company with an orchestra. Most of my colleagues and friends when I was in these other programs were 22 but they had never even gotten to sing with orchestras. Because Springfield was such a perfect place for me to learn, I got to grow with this company. I just thought it was a perfect time in my career for me to come back and teach the next generation of people and give them what has been lacking in the last few years. Give some of these wonderful talented kids from our Ozarks area a direction and show them that it is absolutely possible and you can achieve your dreams and do exactly what I did.  I’m from the smallest town you can think of where people have never even heard of opera, but now they know what opera is because I sing all over the world. And I did it from the Ozarks.

417: Did you make any connections in Europe that can help you in your new role?
M.S.: I have some really good friends in France, Italy and Austria that I’ve kind of recruited and have talked to them about my vision for the opera company. They have all agreed to come to Springfield for very little money and help me with my vision to turn Springfield into an internationally known regional company that does innovative things.

417: Tell us about your vision for SRO.
M.S.: One of the big things that we’re going to be doing is streaming our operas live on YouTube and Facebook. The technology has been around for a couple years but no one has ever done it. Most of my friends who are well known directors, they are going to be coming to Springfield and will be bringing a completely international flair to Springfield by putting on their productions. We’ll be using local talent for singers, and a few of my other friends who are bigger names will come in and be able to sing with our company while teaching at the same time. I want it to be a training grounds.

417: How do you want opera to influence the arts scene in 417-land?
M.S.: I love Springfield but it does seem that a lot of the arts organizations think that there’s a competition going on, but there isn’t. There’s enough public, there’s enough money in the art scene for it to all go around, and it all helps if we bring each other in and we help each other. That’s one of the big things that Christopher Koch, the new music director, and I have been talking about a lot. It’s the inclusion and taking everybody from the theater, and the symphony and the ballet to come together for a project. The opera is a very, very important art form because it’s the first and only one that includes everybody: actors, singers, dancers, composers, directors, lighting people, sound tech, everything is all in one. That’s what opera was originally conceived to do, to be a conglomeration of all the arts, where everyone was working together. One of our biggest goals is to always have a project that connects either the symphonies or ballet or street actors or circus performers.

417: How do you want to partner with the other local arts organizations?
I don’t want to give too much away, but we do have the next three years planned. In opera, we don’t use amplification of the voice; it’s the natural human voice that has to project over the orchestra. That’s why opera is such a different art form than musicals. Traditional musicals were like that, and they are now sometimes, but for the most part everyone’s miked, which takes away, for me, some of the art and the craft. We are definitely going to be showing people what the power of the human voice can be and how incredible it is. To go, wow are they going to get through and be able to sing it? You know, make it a spectator sport.

417: What do you want people here to learn about opera?
M.S.: The big thing that I want to do in these next years is educate people about what opera actually is and what it isn’t. Everyone has these preconceived notions about what opera is. You say “opera” and they all think, “Oh yeah, fat lady with horns.” And they just think Wagner. It’s just so not that. Once you understand the origins of what opera is you start to realize, oh my gosh, that’s what influenced everything. Musicals and movies and everything was composed after opera. Opera was the base for everyone to come together with ideas. Movies would have never happened without opera.

1. Opera was conceived as an art form that was the first of its kind in an attempt bring together all of the various art forms into one performance. Opera was born out of the Renaissance period and the etymology of the word actually means “to work”. The Italians chose this word for their new art form in order to symbolize the message of this new art form. Opera was truly conceived to be a transformative art form both for performers and the public as it sought to enlighten and inspire change in society.

2. Not all Opera is in Italian! While it is true that many Operas are composed in Italian, Operas have been written in virtually every language. Generally speaking they are categorized into Italian, German, French, Russian and English genre operas. In the last 150 years new operas have been and are still being composed in various languages spanning entire globe. Again, Opera is a transformative and reflective art form that most always seeks to hold up a mirror to society in order to provoke change and so it is no wonder that Opera is being composed in almost every language worldwide!

3. Opera is an art form, but also as a collaboration, a partnership of people and community. There is no grander form of live entertainment (with the exception of live television.) Depending on the size of production an Opera will bring together anywhere from a hand full to more than 300 participants working simultaneously backstage as well as in the orchestra and on stage. You can see why many people consider Opera to be a living art form in that massive amounts of people come together for a common cause and every performance is different. In fact, if Opera had not laid out this massively collaborative art form we would surely not have our beloved art forms of musicals or even movies.

4. Don’t worry if you don’t speak the language that it is in. Supertititles (Translation to a screen above) are the norm in most opera houses. Even if there are no supertitles if you just pay attention and enjoy the art form that is in front of you, you will easily understand what is going on onstage. A good rule of thumb is to do just a little bit of research online before coming to the Opera so you can get a good framework of the storyline. After all most of us don’t go blindly to a movie without researching beforehand and opera is no different.

5. Don’t be afraid of Opera. We all have preconceived notions about what Opera is (large people yelling in funny hats often comes to mind) but if you have never been to an Opera you really are missing out. If you ask yourself “why is this artform still around after over 400 years?” you are on the right track. The answer to this question I would propose is because of its intoxicating potion of complexity. Opera is an evolving artform that is tailored to evoke thought and change within. It is true that some opera was conceived to just have a good time and entertain like most Hollywood box office films but the majority of opera is composed in essence like folk music in that there is a reason and strong story behind the subject matter. Love, anger, reverence, and awe are just some of the emotions that are within us and Opera provides a beautiful art form in which to celebrate and transform the human condition. Don’t just take my word for it, come see for yourself!