Peek inside Top of the Rock’s Ancient Ozarks Natural History Museum, a Smithsonian-quality destination illustrating the history and legacy of our region. 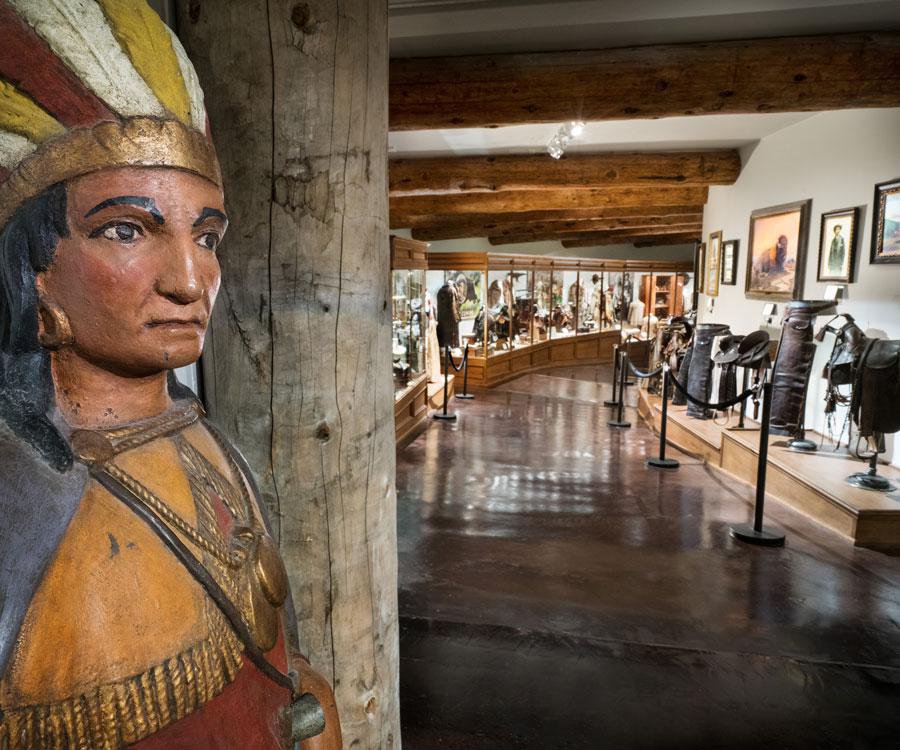 One day after a fishing trip with his father, Bass Pro Shops founder Johnny Morris, then a 16-year-old, walked through a freshly plowed field when a small object in the soil—an arrowhead—drew his gaze and halted his steps. Questions flooded his mind as he examined it. Who once sharpened the arrowhead’s edges? How many centuries had passed since it was affixed to its owner’s arrow? What formidable creature was the object of that day’s hunt?

That arrowhead ignited Morris’s long-held passion for Ozarks history and the legacy and culture of Native Americans, eventually coalescing in the Ancient Ozarks Natural History Museum, a 35,000-square-foot institution celebrating the Ozarks’ storied past and the animals and native tribes who once called this region home.

Housed within Top of the Rock, the museum, which opened to the public in 2015, displays about 75,000 artifacts, roughly one third of Morris’s complete collection. Although the exhibitions span many centuries, tribes and species, they are woven together to paint a picture of the Ozarks’ past. “There’s such a story to be told about what’s right here in our own backyard,” says Shelby Stephenson, Big Cedar Lodge’s public relations manager, who leads most tours of the museum. “What Johnny’s doing here [is] bringing that to fruition.”

Chief Joseph of the Nez Perce tribe was photographed by Edward S. Curtis, who set out to chronicle Native American tribes through photography. His work was supported by President Theodore Roosevelt and resulted in the volume The North American Indian.

Morris’s respect for Native American culture is evident immediately upon entering the museum. Photos capture him beside tribal leaders from across the country who were invited to view the museum six months prior to its debut. “We wanted to make sure that what we had done was honoring to their people and their story,” Stephenson says. “They were just overjoyed with what we had done here.”

The next gallery houses part of Morris’s personal collection, which includes items such as arrowheads, spades and other finds gathered over the years, including during the construction of Top of the Rock. “You can really see that it happened right under our feet,” Stephenson says.

History also unfolded just down the road at the White River, a lifeblood to the Osage tribe. Prior to the construction of the dam that created Table Rock Lake, a massive archaeological expedition took place to unearth the treasures left behind there, a feat chronicled in a series of black-and-white photographs on display. The photos also illustrate groups of locals gathering at the dig sites to admire the artifacts and hear from archaeologists.

The galleries that follow are filled with hundreds of artifacts acquired from similar digs from across the country, as well as from notable private collections and other sources. The items range from adornments and weapons to pottery and even the remains of a canoe that once glided down regional waterways.

Tucked among those artifacts is another relic that represents one of the museum’s key themes: a simple, unassuming jacket made from the gut of a seal, which would have been utilized by Native Americans for myriad purposes. “They were so strategic in using every single piece of the animal and making sure that nothing went to waste,” Stephenson says. That piece is representative of the spirit of conservation that Morris sought to convey throughout the museum. “Part of his passion with this museum, in fact the heart of this museum, is that as he has studied Native Americans, he has realized that they truly were our first conservationists, and conservation is one of the biggest cornerstones of his life and certainly ties in with the legacy that he would like to leave behind in doing all of this,” she says.

This painting by artist David Maan, a noted painter who often portrayed Native American life, is just one piece of classical artwork the museum weaves in among the ancient artifacts.

Our ancestors once shared the Ozarks’ rugged landscape with creatures whose memory is preserved throughout the museum, like the giant ground sloth, the bones of which are displayed at the museum’s entrance. There are also more fearsome animals, like the hell pig, a massive relative of the modern-day hippo; the lethal terror bird, a predatory bird said to have hunted wild horses; and the short-faced bear, a long-extinct predator that would have towered above the modern-day grizzly bear.

Except for the bear, magnificent dioramas of these and other long-extinct species reside in two galleries—one dedicated to creatures at least 250,000 years old, and another to those from at least 11,000 years ago. These dioramas come courtesy of Minnesota-based Blue Rhino Studio, a firm responsible for creating dramatic, detailed exhibits for the likes of Chicago’s distinguished Field Museum. In fact, it was those displays that inspired Morris to commission the firm to help bring Ozarks history to life.

Blue Rhino Studio’s models of the ancient creatures are breathtaking in their realism. Baring glinting teeth, gleaming eyes and a sense of movement and power, the models are put together with remarkable skill and artistry. For example, the firm uses real hair and feathers, many of which are placed by hand individually. “Their process is incredibly meticulous,” Stephenson says. “It truly is art.”

Blue Rhino Studio also creates artful murals in which the models are placed, creating a rich landscape that allows observers to imagine the ancient animals in their real habitats. “Obviously they have to do tons of research into what science tells us that animal looked like and be able to do our closest guess, but they also do the murals to reflect the region, so you’re not just looking at a terror bird—you are looking at a terror bird in Ozarks topography millions of years ago,” Stephenson says.

Historic predators: An enclosed diorama by Blue Rhino Studio shows a terror bird, an extinct, flightless predatory bird that lived in the Ozarks. Terror birds are believed to have been very nimble and swift, and commonly hunted wild horses.

Deeper within the museum, the music shifts from the peaceful tones of a flute to tunes reminiscent of the Wild West and Civil War period, signaling a shift to America’s more recent history. Housed within a 6,500-square-foot expansion wing, this section of the museum opens with photos and memorabilia from notable figures of the American West, perhaps none more so than William F. Cody, aka Buffalo Bill.

The galleries then transition to the Civil War period, which contain items like a lock of George Washington’s hair, 19th-century newspapers and weaponry. Including artifacts from this period was important to the museum team given Missouri’s role as a battleground state during the war. “This was one of the few places in the country where you saw brother fighting against brother and neighbor fighting against neighbor because there was such a deep divide right here,” Stephenson says.

The final room of the museum digs deeper into the importance of conservation. One side of the space honors President Theodore Roosevelt and his National Park Service legacy. On the other side stands an emblem of American conservation: a taxidermied buffalo, a species that was brought back from the brink of extinction. “It serves as a memento of where we’ve come because of conservation efforts,” Stephenson says. “If there were not conservation efforts in place to protect the species, we wouldn’t have this today.”

The centerpiece of the room is a panel emblazoned with words from the commencement address that Morris delivered to the University of Missouri School of Natural Resources in 1995. In that ceremony, Morris recited the famous letter purported to have been written by Chief Seattle. There is some debate in historical circles as to whether the chief penned the letter, but it nevertheless stands as a poignant opus on the beauty of nature and that all living things “are connected like the blood which unites one family.” Printed copies of the letter are available so visitors can cement a deeper personal connection with the people and wildlife of Ozarks history. “Our hope is that when you do that, those natural human emotions come forth, and you make a more personal connection to become more passionate about what we can do to conserve our natural resources today and preserve them for future generations,” Stephenson says.

Massive mammoth: One of the first things visitors see at the entrance to Top of the Rock is this skeleton of a Woolly mammoth.

1. Surprisingly, Missouri was once home to sloths—although they would have towered over comparably pint-sized modern-day sloths with their staggering 10-foot-tall stature!

2. Archaeologists discovered numerous artifacts at Dogwood Canyon, including 8,000-year-old human remains, believed to be the oldest ever found in Missouri.

3. Warriors from certain tribes wore robes covered with illustrations depicting major life events. “Today, we have Twitter bios; back then, this is how they described who they were and what their life was,” Stephenson says.

5. Famed Apache chief Geronimo became quite a celebrity in his day. People clamored to meet him at the 1904 St. Louis World’s Fair, where he’s purported to have greatly enjoyed riding the event’s grand Ferris wheel.

7. During the Civil War, fake cannons were used on occasion with the intent of intimidating and confusing the enemy.

8. Curious where the memorabilia from Branson’s Roy Rogers–themed museum went when it shut down? After a cross-country trip to an auction out west, some of the iconic cowboy’s gear ended up at the Ancient Ozarks Natural History Museum. 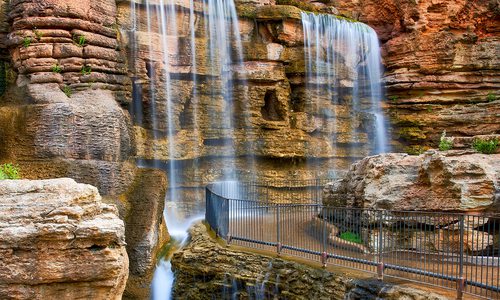 Experience the Beauty of the Ozarks at Big Cedar

With Top of the Rock, Dogwood Canyon and Big Cedar Lodge all at your fingertips, you'll wonder how you only had to drive an hour to feel so...