Joplin’s oldest restaurant offers up a fascinating history, well-crafted classic dishes and an experience you won’t want to end. 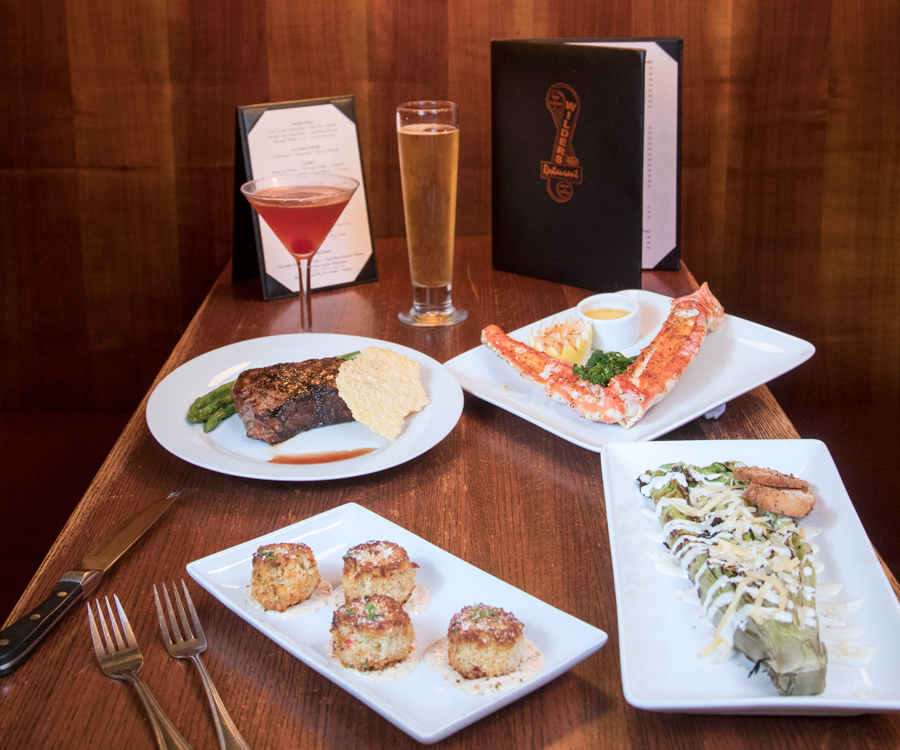 When you dine at Wilder’s Steakhouse for the first time, the experience begins before you even walk in the door. First, you spot the huge, retro, glowing neon sign from about a mile away, and the excitement begins to build because even though you’ve never been to Wilder’s, with a sign like that you know it’s going to be something special. As you get closer, said sign informs you to “park in rear.” Pulling around back, you see an old-school canvas canopy that leads into the building. Walking in you imagine that this is what it must have felt like to walk into a speak-easy during Prohibition, and considering Wilder’s used to be a speak-easy, you won’t be far off. Once you’re inside, the tin-stamped ceiling, vintage Art Deco bar and dim lighting add to the feeling that you’ve stepped back in time. You slide into a booth and know you’re in for an evening outside of the ordinary.

It’s a Sign: The neon blade sign attached to the front of Wilder’s Steakhouse is one of the Joplin’s most iconic images. Glowing blue, red and white, this piece of Americana has beckoned to hungry diners for more than 60 years. A second neon sign, which has been broken for many years, sits on top of the building. The owners, Mike and Marsha Pawlus, have applied for a grant through the National Parks Association in hopes of refurbishing it.

Raising the Bar: One of the first things you’ll notice when you walk into Wilder’s Steakhouse is the gorgeous Art Deco bar that runs along most of the dining room. Built in the 1940s, the bar features inlaid lighting, stylish cut-outs and other period details that will make you want to pull up a stool and order an Old Fashioned.

Take a Seat: Across from the bar is a row of high-backed booths. These tables are perfect for a date night, as they come equipped with their own adjustable wall globe lamp, so you can control your lighting.

The More the Merrier: Wilder’s Steakhouse has two side rooms that can be used to host parties or enjoy a private dinner. There is typically no extra charge to hold a dinner in one of these if there is open availability.

Founded in the 1920s, Wilder’s is the oldest restaurant in Joplin and has been reinvented several times throughout its storied history. 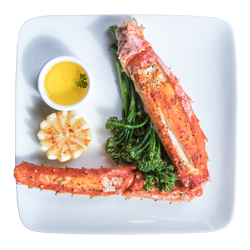 It’s been a gambling hall, buffet restaurant, burger joint and most recently as a fine-dining steakhouse. When I visited, I was immediately charmed by the decor, which added modern design elements to the original Art Deco bones of the restaurant, and the atmosphere, which managed to be both cozy and sophisticated. My mood shifted from worried about the long drive home to being ready to linger over a leisurely meal.

The menu, which offers classic, well executed and flavorful dishes, is exactly what you want out of a steakhouse. When it comes to a chophouse, there’s no need to reinvent the wheel. There is, however, a mandate to cook a steak to temperature—something that has proven a challenge for other 417-land restaurants. I held my breath as I sliced into a $36 Kansas City strip and exhaled a tiny sigh of relief as my knife revealed a perfect medium-rare red. As I was eating my strip, I didn’t even pick up the salt. The meat had been well-seasoned and charbroiled until a delightful crust covered the steak. The other items my dining partner and I tried were equally successful. For appetizers, we ordered the crab cakes and a grilled Caesar salad. The crab cakes were lightly breaded, served with a rémoulade sauce and packed full of chunks of crab.

The grilled Caesar salad was simple but delicious. It was so good I was inspired to make the dish for a dinner party I held a couple of weeks later. I think I would have pulled off the feat had I not accidentally made the Caesar dressing with sardines instead of the prescribed anchovies. Needless to say, I threw out quite a bit of salad that night. For our other entree, we decided on the king crab legs. Crab legs have been a favorite of mine ever since my dad and I took a white-water rafting trip to upstate New York for my 21st birthday. For my birthday dinner, we both ordered crab legs and went to town. I’ve ordered crab legs since then, but they’ve never lived up to the ones from my birthday trip. At Wilder’s they did. The crab legs had been split twice, and part of the shell had been removed so the meat was easy to eat. They had also been basted with butter, topped with paprika and lightly broiled. I was sad when I pulled the last bit of flesh out of the shell.

I was also sad when it was time to make our departure. We were the last ones in the restaurant and didn’t want to overstay our welcome. It was hard to leave the warm glow of the restaurant for the cold and dark that awaited us outside, but all good things must come to an end. 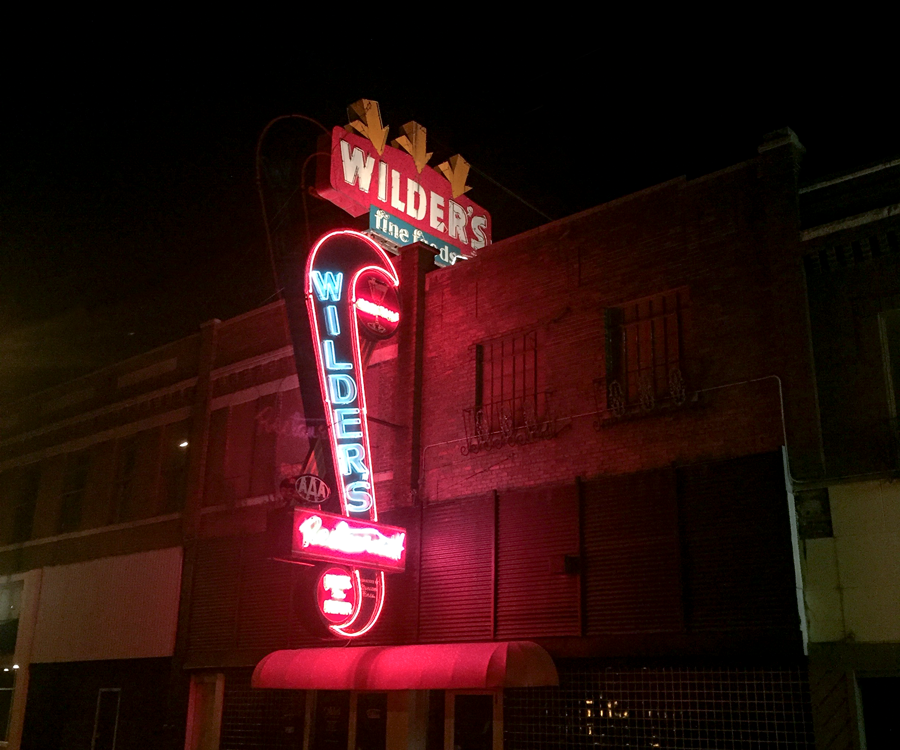 The restaurant’s iconic neon sign has been lighting the way for locals and visitors alike for decades.

Q & A with Marsha Pawlus

417 Magazine: How does it feel to own one of the oldest restaurants in Missouri?
Marsha Pawlus: We feel like stewards of this restaurant. It belongs to the city of Joplin. It doesn’t really belong to us. We’re just fortunate enough to be able to run a business in there right now. It’s got such a long history, and people remember so fondly coming in with their grandparents.

417: What do you love most about running Wilder’s?
M.P.: The customers. It’s wonderful. I almost hate to not be here. We have so many guests that are here once [or] twice a week even. And then those people that come in for special occasions. And I love talking to every one of them.

417: Can you tell me about the history of Wilder’s Steakhouse?
M.P.: Mr. Wilder ran and operated a bordello and gambling casino upstairs, and they ran bootleg liquor out the back of the building during Prohibition. It’s got quite a colorful history. The [Kansas City] mob was trying to get a little piece of his action [of] the gambling and the bordello. They were wanting him to let them in on it, and he said no, so they bombed the place up where his office was. I know that there were some ladies playing bridge down in the restaurant, and they were all asked to leave, and they all stood out in the parking lot for some time before they would leave because they all had their cards in their hands. They were planning on going back in and finishing their game up.

417: I know you specialize in steaks. What makes Wilder’s steaks special?
M.P.: We use Creekstone beef and it’s hormone- and antibiotic-free black Angus beef. It’s from Arkansas City, Kansas, and we’re very proud to bring that to Joplin. The beef is very tender. It’s all raised and butchered under the guidance of Dr. Temple Grandin. They have adapted all of their practices to her recommendations, so the beef is less stressed when it is going to butcher, and that causes the meat to be more tender. 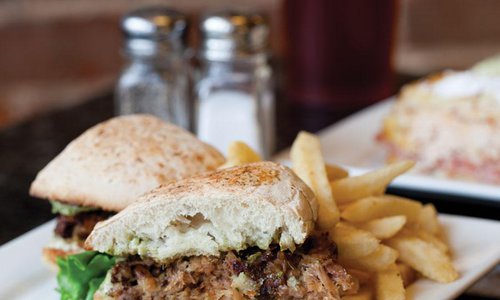 Homemade pies, cakes, muffins, scones and breads are flying off the shelves at this charming café in Ozark.