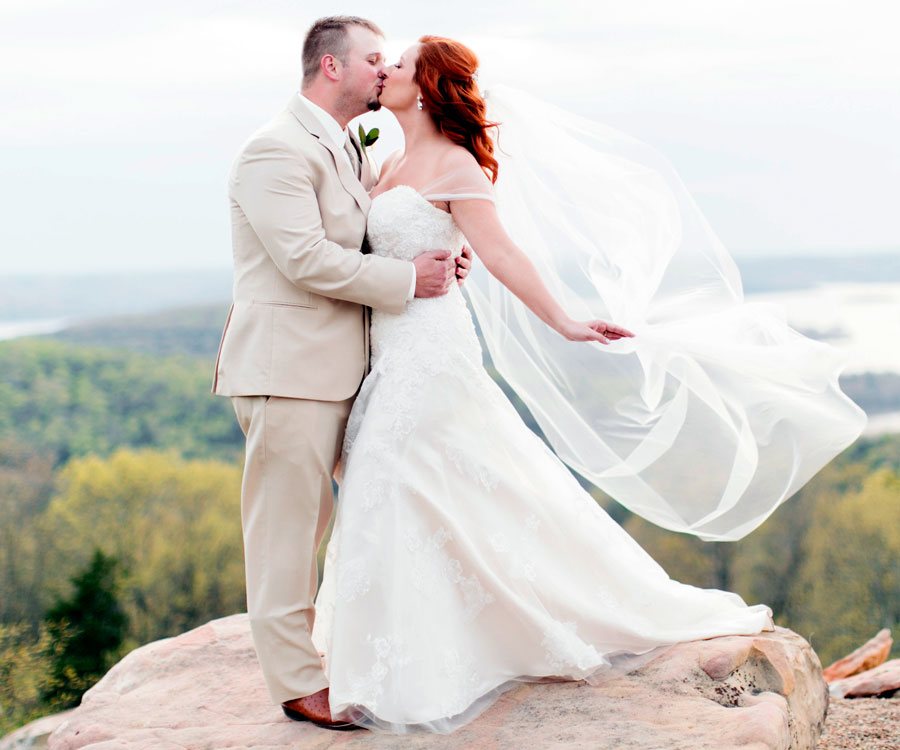 Megan knew she wanted her wedding to be held somewhere with rolling hills and stunning scenery. Having gone to neighboring Big Cedar Lodge for several getaway trips with her mother, Megan realized that Top of the Rock fit the bill beautifully.

Although Megan Gray and Jesse Schulte both work as assistant merchants at Bass Pro Shops’ corporate headquarters, it took more than nine months for them to officially meet, which they finally did at a Christmas party. Jesse—sporting a festive, noticeably too-small onesie—made an impression, and they started spending time together with friends in the weeks that followed, including cheering on their beloved Mizzou Tigers in Dallas at the Cotton Bowl. Their first date was a Thomas Rhett concert, the first of many concerts to come. “We bonded over our love of the Tigers, country music, football and small towns,” Megan says.

One year later, they headed to Big Cedar Lodge and Top of the Rock to celebrate their anniversary. Having spent the prior month planning a special proposal, Jesse was a bundle of nerves, so much so that he backed his car into a boulder. After shaking off the slip-up, the couple went for a stroll, eventually meandering over to Top of the Rock’s Chapel of the Ozarks. Jesse urged Megan to go inside. Megan noticed a small crowd standing nearby and overheard that a proposal was underway. “I had no idea it was the preparation for my very own proposal that was taking place inside,” she says.

Once they entered the chapel, Jesse got down on one knee and asked Megan to marry him. He presented her with a precious family heirloom: the ring once worn by her mother and great-grandmother. She said yes, and the couple wed 11 months later in a romantic ceremony held in the very chapel where the proposal took place. After the exchange of vows, an elegant reception at Top of the Rock Wine Cellar Event Room kicked off the Schultes’ happily ever after. 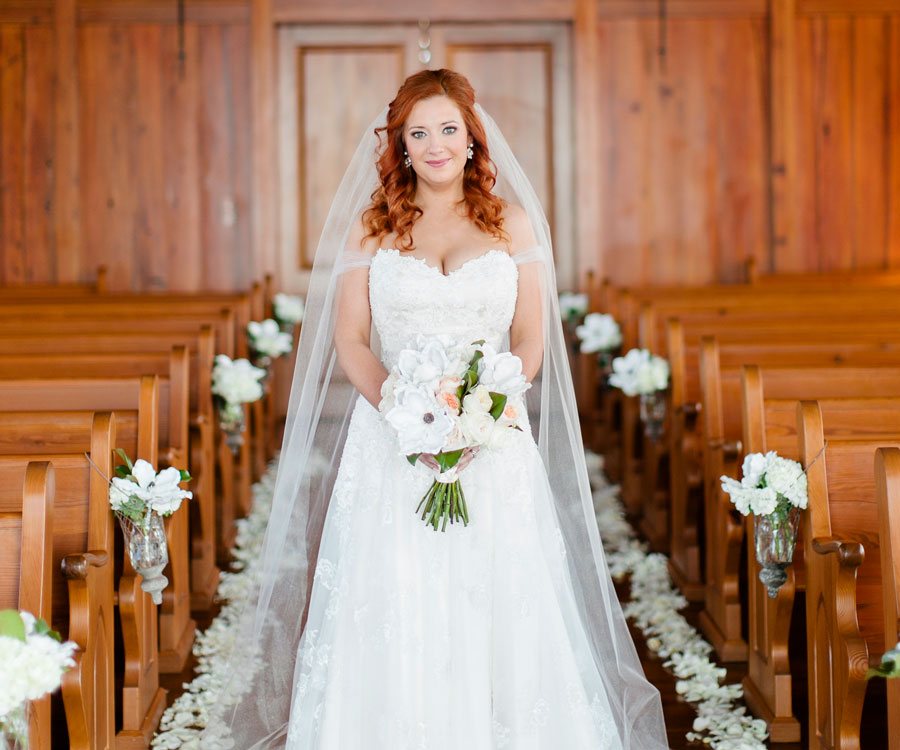 Chapel of the Ozarks’ rustic, rich interior was accentuated with delicate touches like the silk magnolia flowers strewn along the aisle. 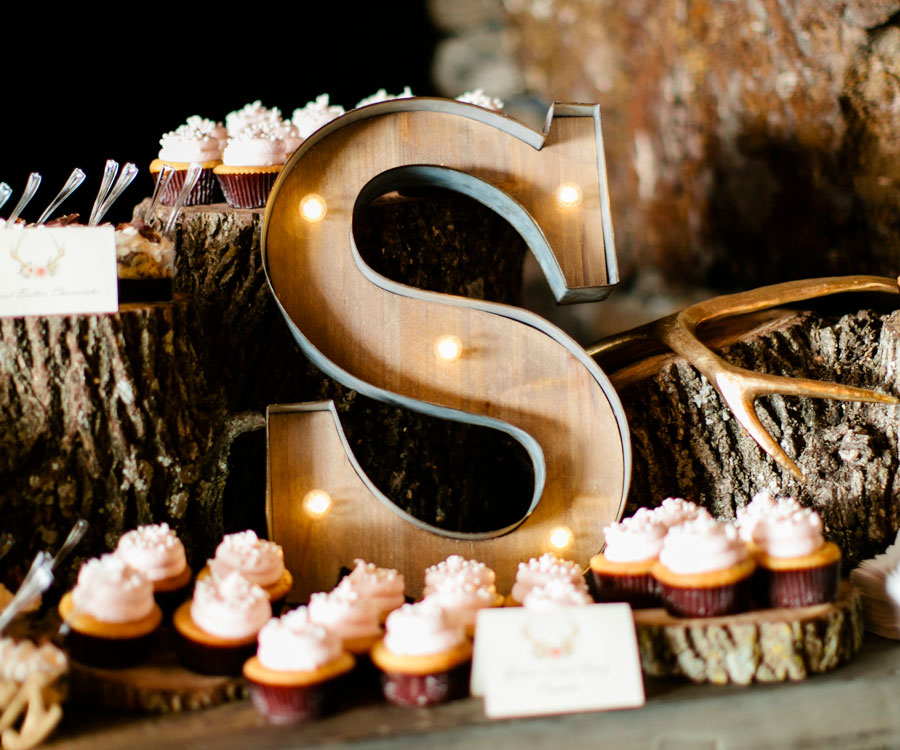 Jesse and his best man, Jack Scheidt, cut the wooden rounds used to present goodies on the dessert table, the layout of which was sketched out by Megan’s mom, an art teacher. 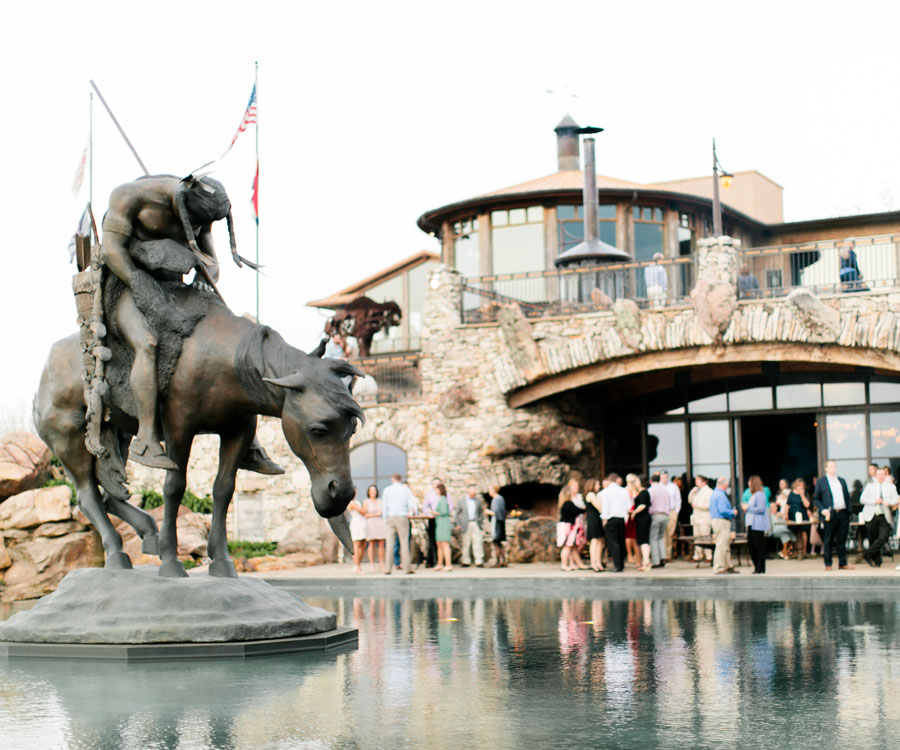 Guests socialized during cocktail hour and admired Top of the Rock’s infinity pool that seemingly flows into Table Rock Lake. 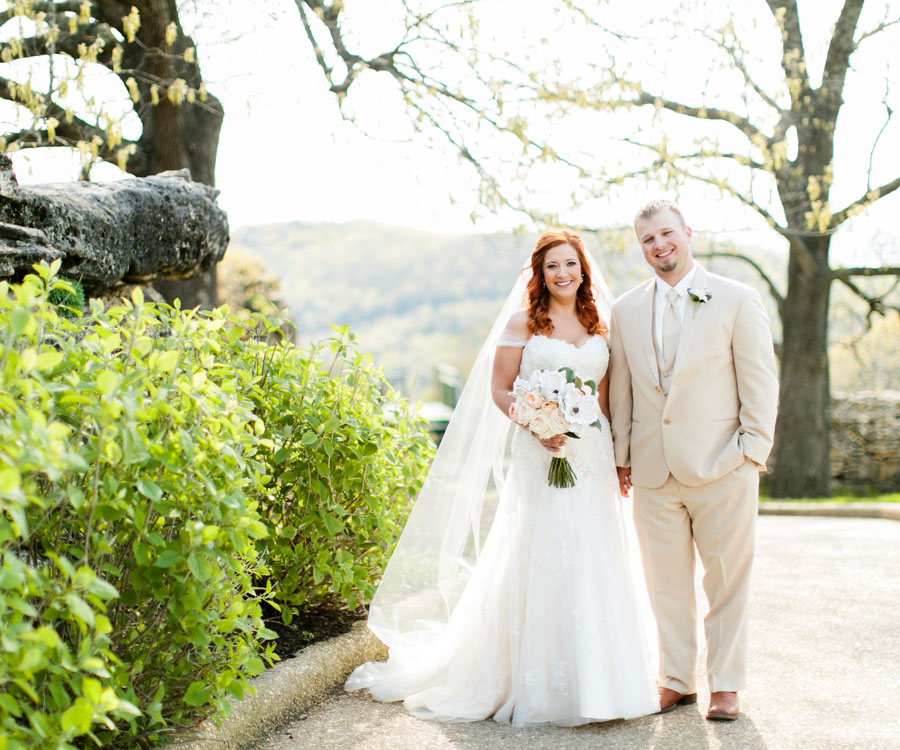 At first, Megan was hesitant to select a strapless gown, but she fell in love with this champagne, fit-and-flare Casablanca Bridal dress from Gracie’s Bridal, to which she added delicate sleeves. 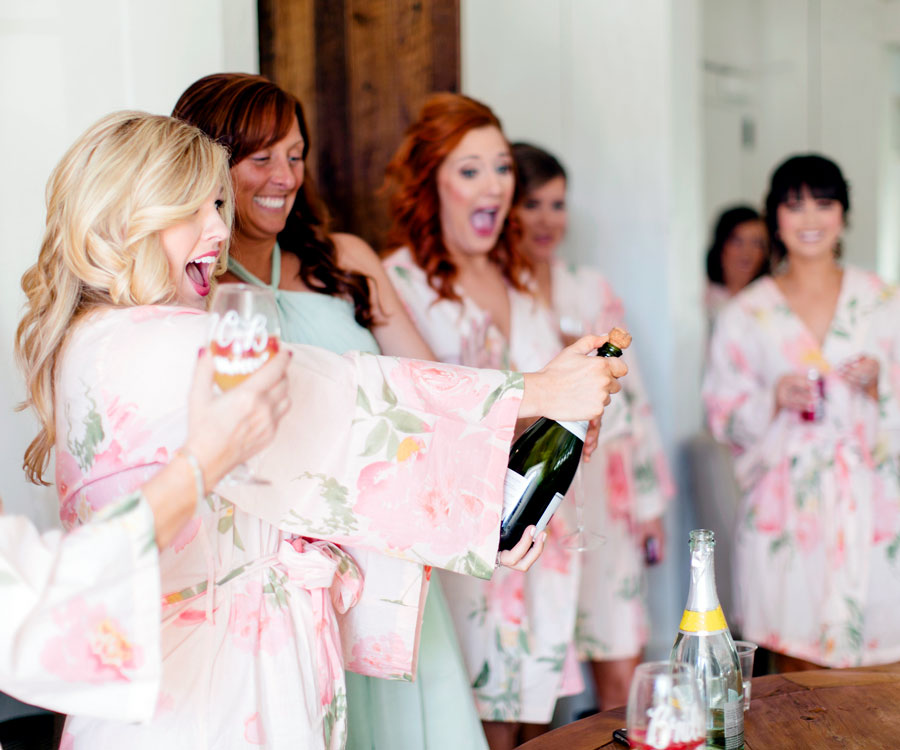 Megan treated the bridal party to stylish matching robes that they all wore while getting ready. 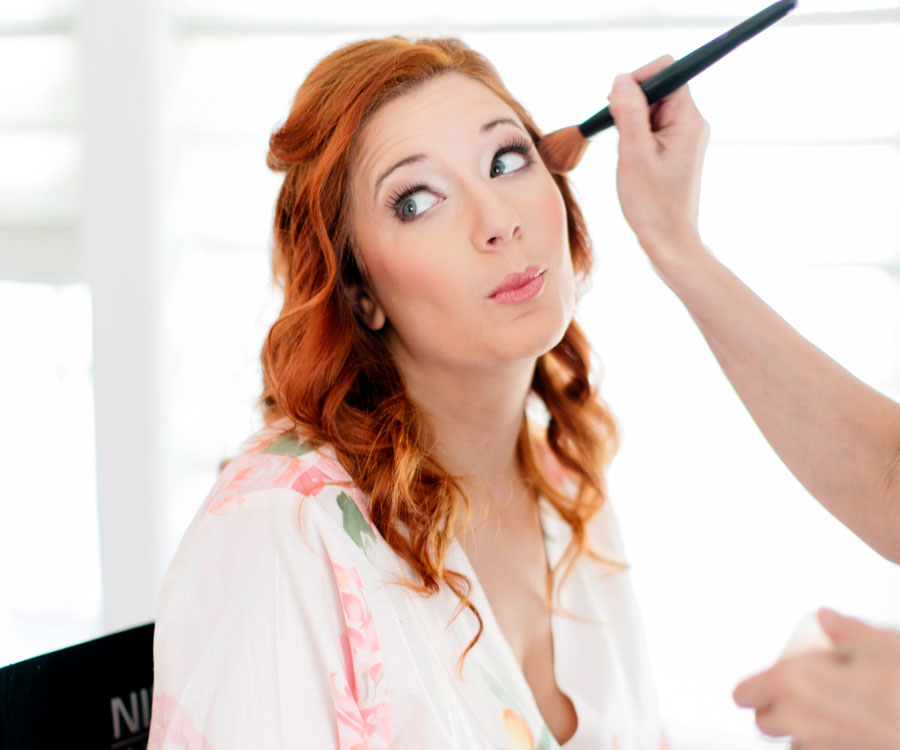 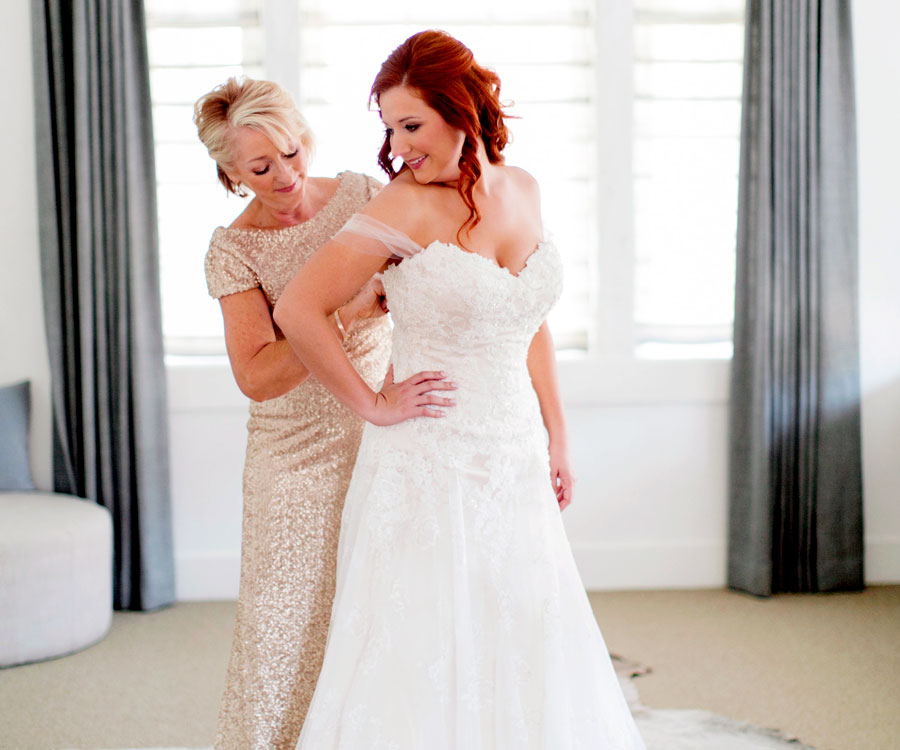 Megan’s mother, with whom Megan shares a close bond, was the only person who saw the wedding gown prior to the big day. 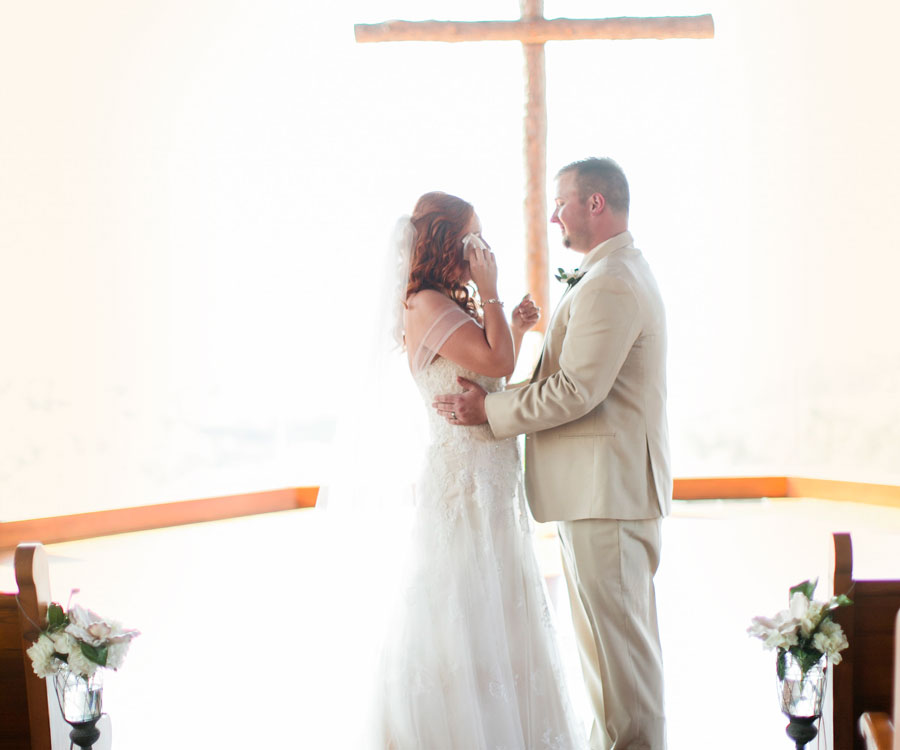 Off the Record: Megan and Jesse shared a precious moment in the chapel prior to the ceremony. 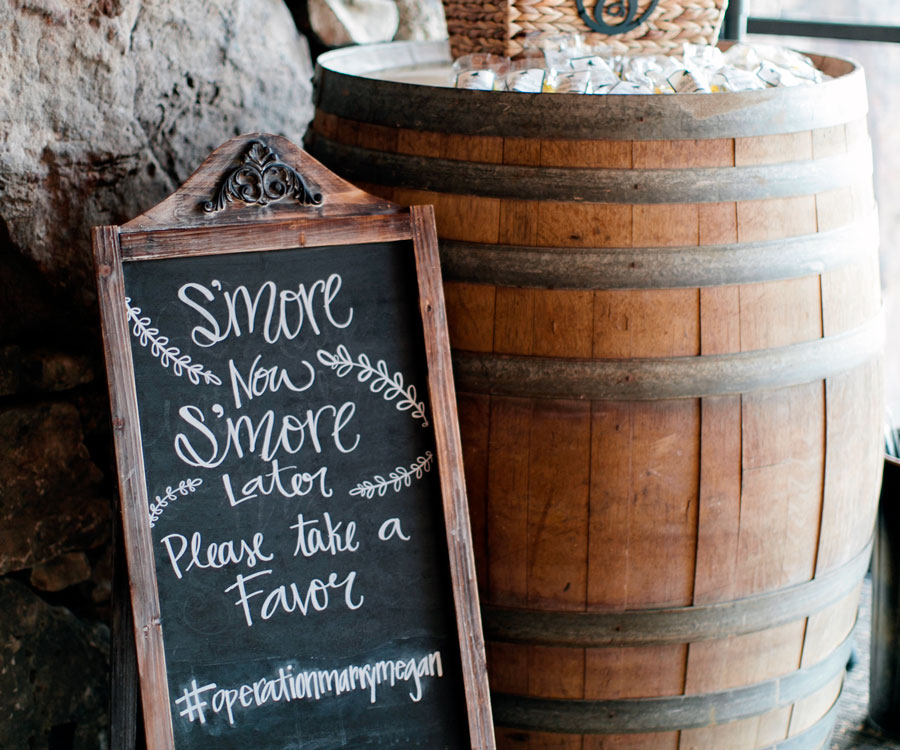 Megan and Jesse made s’mores on several of their early dates, so the treats were a perfect favor for guests to take home and enjoy. 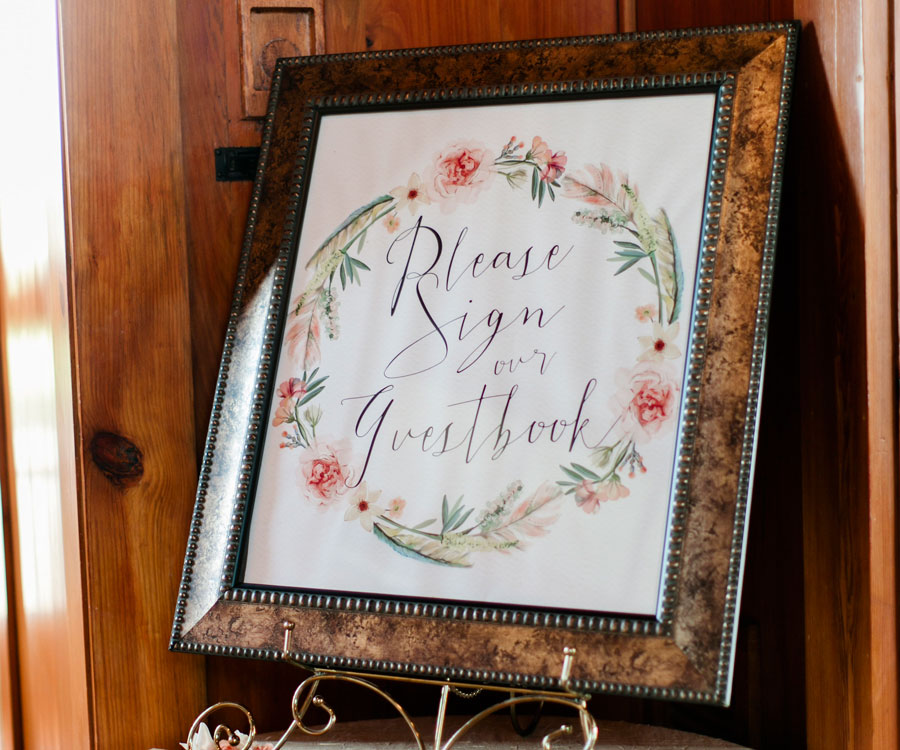 In place of a traditional guest book, guests signed an artful wood slab currently hanging in the couple’s home as a reminder of the loved ones they celebrated with on their wedding day. 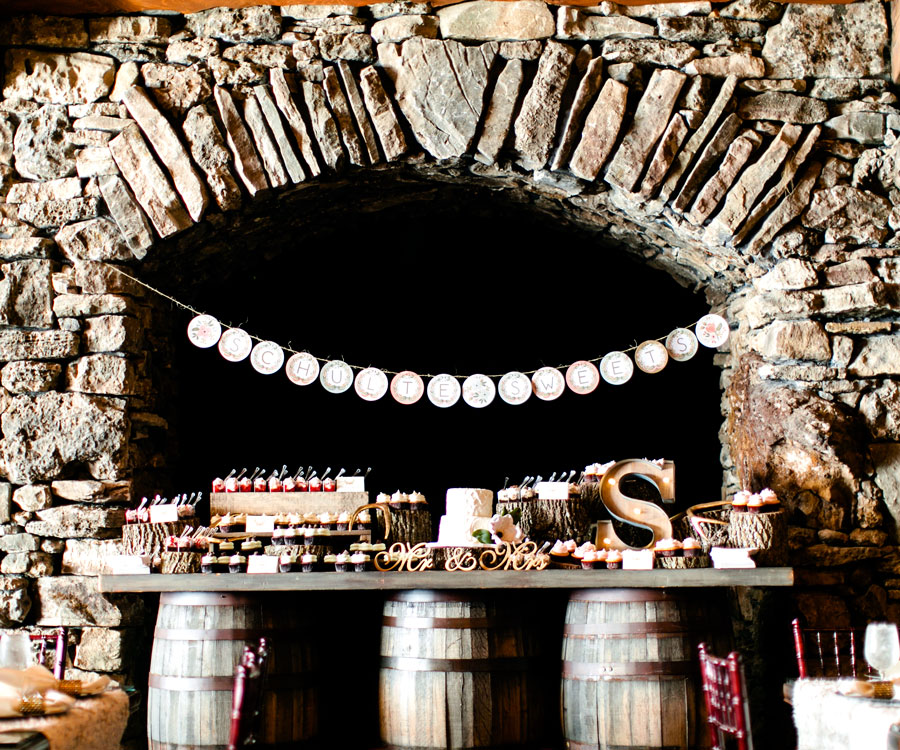 Resting on whiskey barrels, the dessert table displayed delectable treats like Amycakes cupcakes and a two-tier cake from the bakery. Cheesecake, Jesse’s favorite dessert, was represented with mini cheesecake shooters. 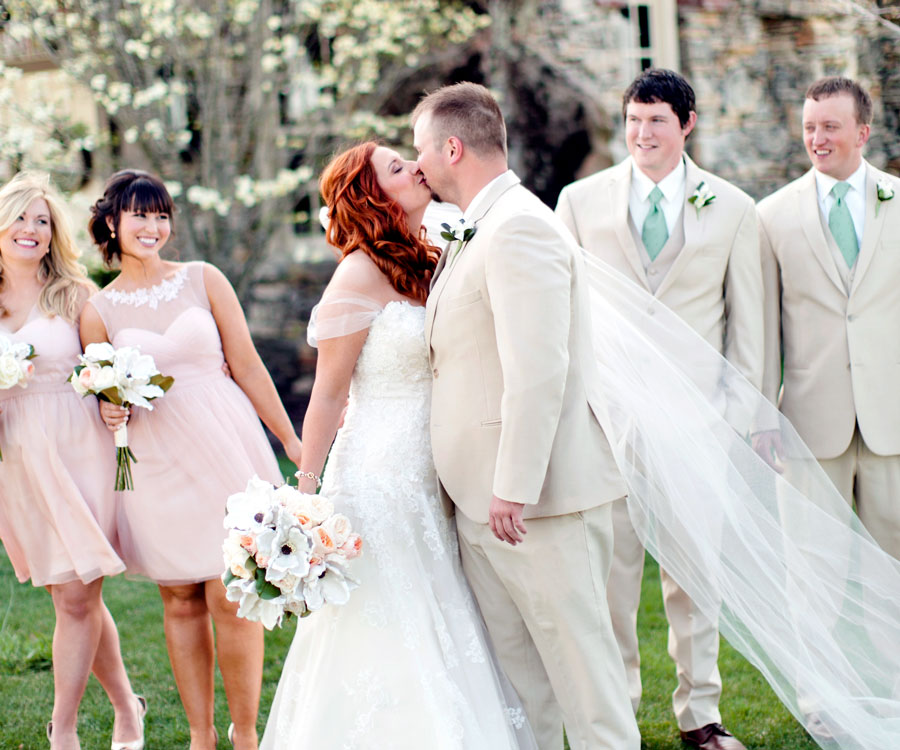 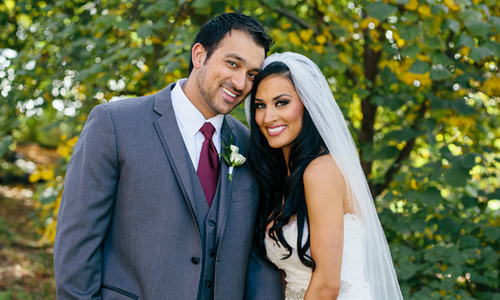