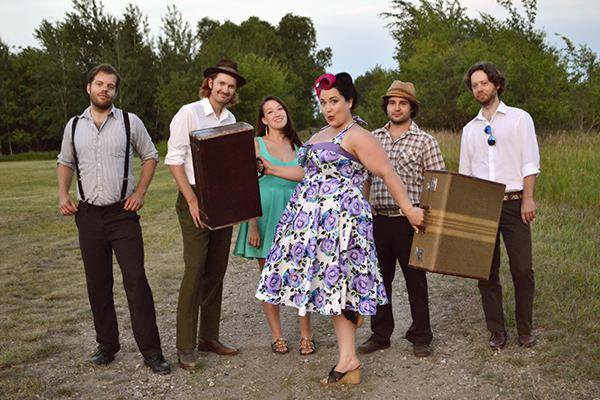 The band’s one-of-a-kind sound is a blast back to a prohibition-era speakeasy, with gritty blues and honky tonk that revs with rock-and-roll influences.

White sings for The Fattenin’ Frogs and plays kazoo.

She has crooned for as long as her memory serves, inspired by the early female singers of jazz and blues music.

Holm, with a love of 1960’s rock and delta blues, plays guitar, harmonica, and banjo.

“We bring a lot of energy for a duo,” Holm says. “There’s a lot more fingerpicking with the duo [than the full band]. And a lot of stomping.”

“And a lot of hollering,” White adds.

They are currently on the last leg of a tour as a duo, and playing Springfield for the first time ever, Friday, June 17 at Patton Alley Pub.

New compositions have poured from Holm during the pair’s midwest swing in just a few weeks. With two week left on the road, he’s written most of what he anticipates what will make up most of the group’s next album.

The morning after a concert in Milwaukee, Holm literally pulled the car over.

“He had a couple ideas for melodies,” White says. “We wrote three songs right there.”

At home the band plays with four, five or six musicians, but the duet formation seen on this tour will more likely resemble the band’s upcoming fourth album.

“It will have the same energy,” Holm says. “More fingerpicking.”