How Springfield's Lakyn and Taylor Moore survived the disastrous Fyre Festival in the Bahamas. Hint: It involves stealing a waterlogged bed and eating Kraft singles. 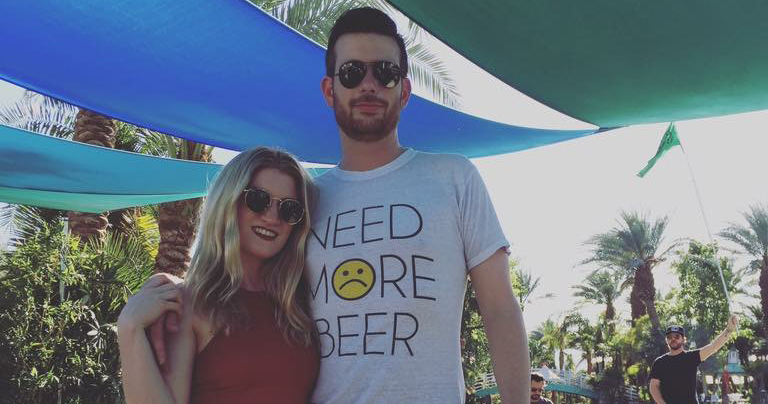 Being avid music festival attendees and lovers of all things travel, when my husband and I first heard of the Fyre Festival, a luxurious three day stay in the Bahamas with live music, we were instantly intrigued. Their marketing team should win an award, because the website and social media made the festival look like the most luxurious and sought-after event of 2017. There would be gourmet catering, unique and well-furnished bungalows, beautiful beaches, treasure hunts, swimming with pigs and most importantly: live music. We were sold and immediately bought a VIP package for a little more than $5,000, which seemed like a good deal because flights, lodging, food and drinks for the whole weekend were included.

This being its first year in existence, we assumed that the festival wouldn’t be perfect, but that kind of added to the adventure. Once we got on our charter flight to the Bahamas, we were surrounded by more than 100 drunk twentysomethings playing music and having their own pre-party. When we landed in Exuma, we got a little concerned when the transportation was essentially a run-down school bus. We piled into it like sardines, but we remained optimistic.

When we arrived at the festival site, our hearts sank. The gorgeous, pristine beaches we were promised were actually an unfinished parking lot surrounded by rocks, covered in hundreds of small, plastic FEMA-looking domes. Upon being dropped off, we joined an ever-growing crowd of angry people surrounding two feckless young men in “Staff” T-shirts who looked to be on the verge of full-blown, paralyzing panic attacks.

We discovered that not only was there no real lodging, but also no assigned tents either—it was every man for himself.  The sun was going down, there was no organization, no food, and most people still didn’t have their luggage. Trying to manipulate the situation, “Fyre Girls” in bikinis were sent into the crowd to pour tequila directly into attendees’ mouths which, given that there was no food in sight, was a recipe for complete disaster. A joke was made that this must be an elaborate scheme to get us onto the island to play out a real life Hunger Games scenario which, in hindsight, was pretty accurate.

Fyre staff decided to jump ship and suddenly we were on our own. If we were going to find shelter, we needed to act fast. People had already begun running and claiming tents for themselves. But most tents didn’t have beds, everything was soaking wet, and the tents were filled with two inches of standing water from a storm the night before.

In the scramble, I got separated from my husband for almost an hour. It was dark and I was surrounded by frantic/drunk people in swimsuits, but we finally found each other and an open tent, though it didn’t have a bed. We had a tent and felt fortunate, but we needed a bed and it was clear what we needed to do: steal someone else’s.

DISCLAIMER: We are not monsters.

No, we didn’t steal someone’s only bed, but when we saw our neighbors’ tent was unguarded and had two beds, one of them was clearly meant for us. We wedged it out and scrambled it back to our own momentarily unguarded tent. As we plopped down on our damp bed, congratulating ourselves on our perfect heist, our neighbors popped in and exclaimed, “You’ll never believe this, but someone stole one of our beds!”

“That’s terrible, we can’t believe that!” We lied, and promised to keep an eye out for them so that nothing else of theirs was stolen, which we actually meant, because we already got what we needed from them. People helping people—it’s powerful stuff.

I went alone to search for food, while my husband kept guard over our tent and precious soggy bed. Whenever I eventually found the tent that was supposed to house our “gourmet catered” meals, I was given a Styrofoam box containing only bread, a single piece of Kraft cheese and a large helping of disappointment.

Upon my return with our sustenance for the night, we decided the best course of action was to hunker down, keep our wits about us and wake up early to make a break for the airport before everyone woke and started setting things on fire (which eventually happened that night anyway). We sealed the tent the best we could, using the Styrofoam box as a boobie trap of sorts, and cut holes in the plastic ceiling so we could breathe.

We woke up at dawn and walked to the festival’s central site, suitcases in hand. There was already a school bus there packed to capacity with festival goers seeking a ride to the airport. When a middle-aged man in ragged jeans and a “Big Johnson” T-shirt stepped off the bus and sped off in a beaten up pick-up truck and we learned he was the bus driver, my husband and I shared a determined look and a single thought: “Screw this!” We immediately began a speed-hike uphill out of the festival site in hopes of hailing a cab or thumbing a ride—whatever it took to get to the airport. The mad dash was beginning.

Being the first out of the festival that morning, we were able to flag down a local willing to take us to the airport for $20. When we arrived, there was already a long line of people who had been there since the night before. This little airport, on a desolate island in the Bahamas, was completely overwhelmed. We waited in line for hours before we finally procured a handwritten boarding pass. We felt so lucky, as if we had been handed Willy Wonka’s golden ticket, but getting through Bahamas “customs” was a disaster and we had to wait another six hours outside in the hot sun with an ever-growing crowd anxiously waiting for the first flight off that rock. Thirty minutes before boarding, we learned that the Exuma airport had severely overbooked the flight. As word of this spread through the crowd, panic set in and people started trying to force their way to the front, causing several fights. When the flight was called, a mad rush ensued and a girl behind us was trampled resulting in a severely injured leg.

We were allowed to board the plane, exhausted and starving, but we weren’t out of the woods yet. The captain’s manifest did not match with who had actually boarded the plane, so we waited on the tarmac for the better part of two hours in the hot Bahamas sun while they sorted things out. When the announcement came over the PA that we were taking off, we all erupted with applause and cheers. As the plane ascended, we fell into a dreamless sleep and arrived in Miami with our health.

We did make some meaningful friendships that were forged in the Fyre Festival dumpster fire and ended up having a great time in Miami. And we feel even closer as a couple, having proven to ourselves that we can handle just about anything together. We are now part of a class-action lawsuit filed by none other than Mark Geragos for $100 million. Fingers crossed! 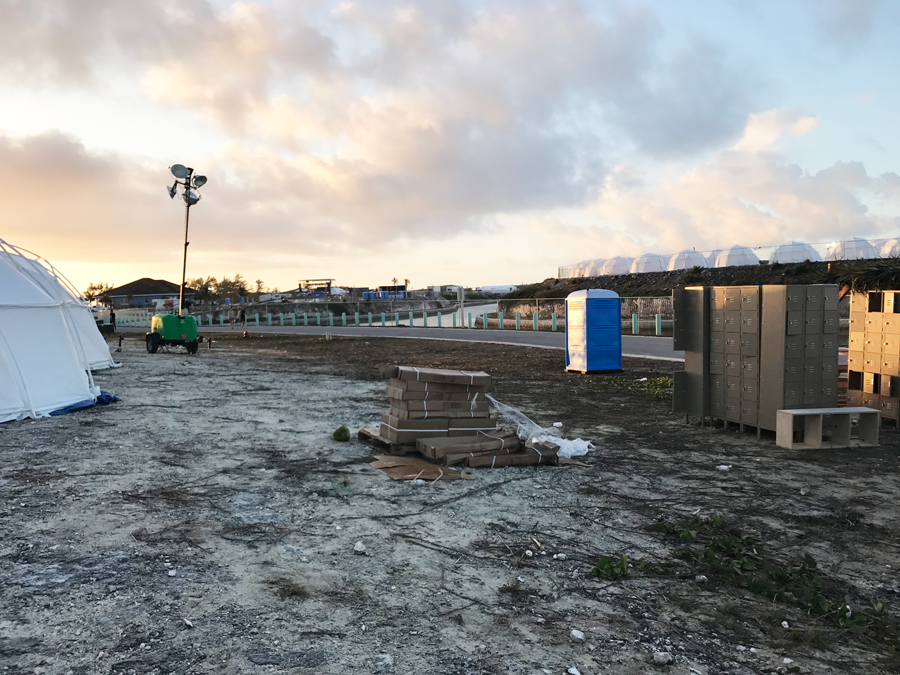 Photos by Lakyn MooreThe gorgeous, pristine beaches that were promised were actually an unfinished parking lot surrounded by rocks, covered in hundreds of small, plastic FEMA domes held together by PVC piping. 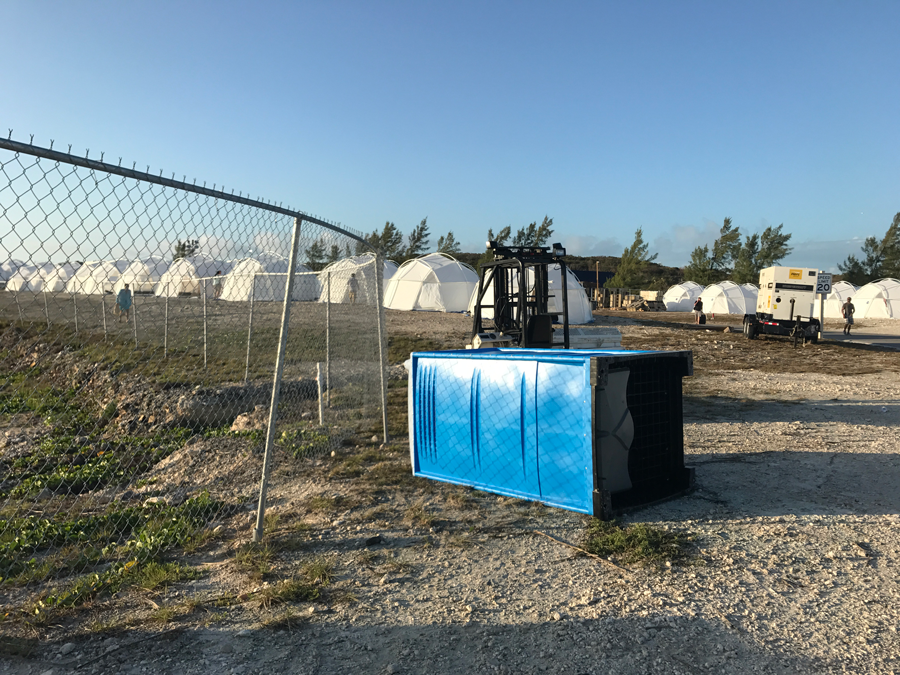 Photos by Lakyn MooreA defeated porta-potty rests on its side at the festival site. 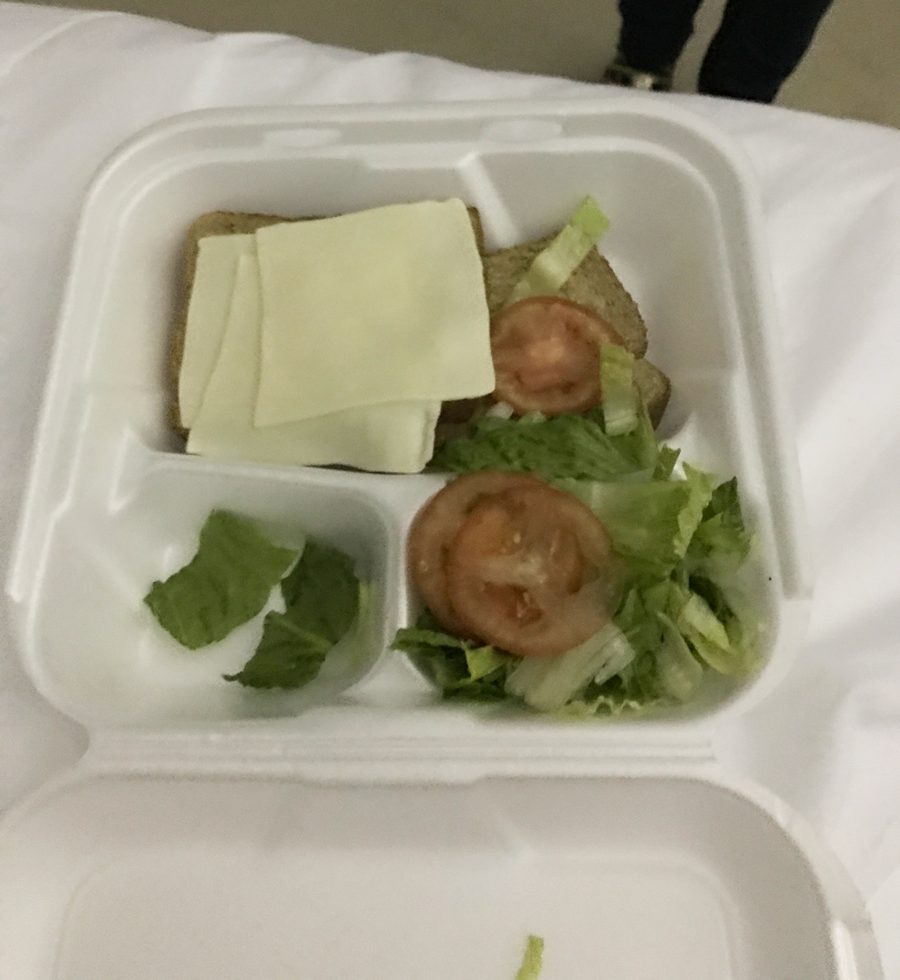 Photos by Lakyn MooreThe gourmet dinner promised for Fyre attendees turned out to be a very sad sandwich.
Continue To Next Story 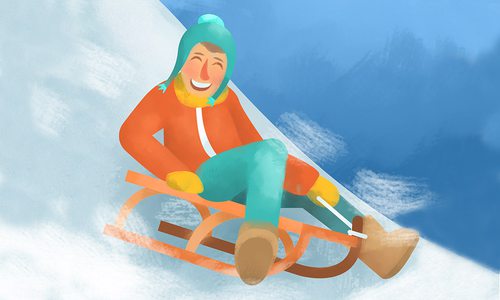 Grab your sled and wrap up (for some extra protective padding) to hit one of these slopes this winter.