Funk Tank is a genre-bending funk and soul powerhouse with a singular goal: to make you dance. They play Lindbergs on Saturday at 10 p.m. 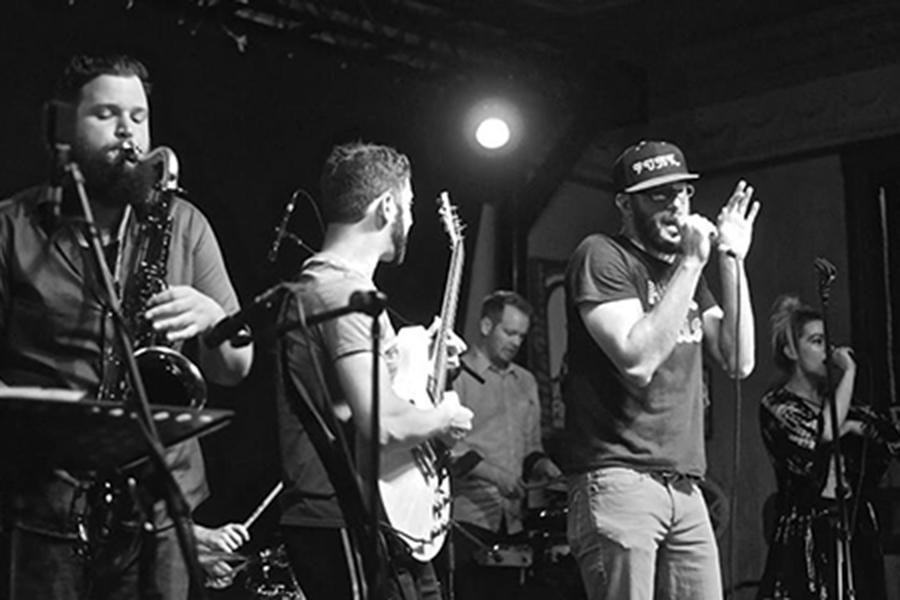 Funk Tank, Springfield’s 10-piece powerhouse funk band was founded in 2015. The lineup consists of Missouri State University alums jamming a style of funky dance music rare to find on stage anymore. We caught up with one the band’s founders—and one of Funk Tank’s three vocalists—Marcus Handy, ahead of the group’s Saturday show at Lindberg’s Tavern.

417 Magazine: How did Funk Tank come together?

Marcus Handy: I saw a need. My heart and soul started with funk music, and there wasn’t any live dance music on stage any more. It started out as six original members. There’s lots of cover bands in Springfield, but we wanted to play funky, old-school originals. We all come from different backgrounds of musical experience—a lot of us actually classically trained jazz musicians.

Handy: A lot of us are foodies in the band. Before rehearsal we always get together and grill, eat barbecue, we like to be full. Before shows I’m a cheeseburger and fries guy. Usually I go to Grad School or Lindbergs because those are the best burgers in town. A Full Ride [at Grad School] with three or four stars, a beer and I’m good.

417: Is there a story behind the name Funk Tank?

Handy: Jerod Owen, our bass player, was the first person I approached wanting to start a funk band. My original goal was to have the band named Too Funk to Drunktion. Jerod said ‘let’s have a think tank about funk music, a funk tank.’ In our meeting we decided that was a good enough name.

417: What can listeners expect from your live show?

Handy: The goal is to get people dancing. We don’t like to go to shows and see people standing around in the corners. We’re very high-energy funk, soul and R&B music. It’s easy to dance to, easy to sing along with for everybody. We’re trying to bring the original roots of live dance music back to the stage.

417: What does having multiple vocalists do for the group’s versatility?

Handy: It’s really nice because we all have different tambors of voice. Cassidy is a classically trained singer from MSU, formerly with A-Cub-Bella. My background comes from funk and soul music. Dan Weinhaus has a different voice as a singer-songwriter. We can have three-part harmonies, and all can sing lead. I like to say I’m a vocalist in Funk Tank because to say I’m the lead singer isn’t accurate.

417: Who are some of the artists you listened to growing up that influenced this sound?

Handy: Growing up I listened to Motown, anything and everything Motown: The Temptations, The OJs, The Isley Brothers, Curtis Mayfield. One of my biggest influences as a songwriter is “Papa Was a Rolling Stone” by The Temptations—there were five or six voices that could take the lead at any time. It’s nice that with 10 members, they all bring different backgrounds so their parts are written with their influences which aren’t always funk and soul music.