We turn the spotlight on Springfield Little Theatre to learn what really goes on behind the scenes and ask just how many ghosts have been spotted at Landers Theatre over the years. 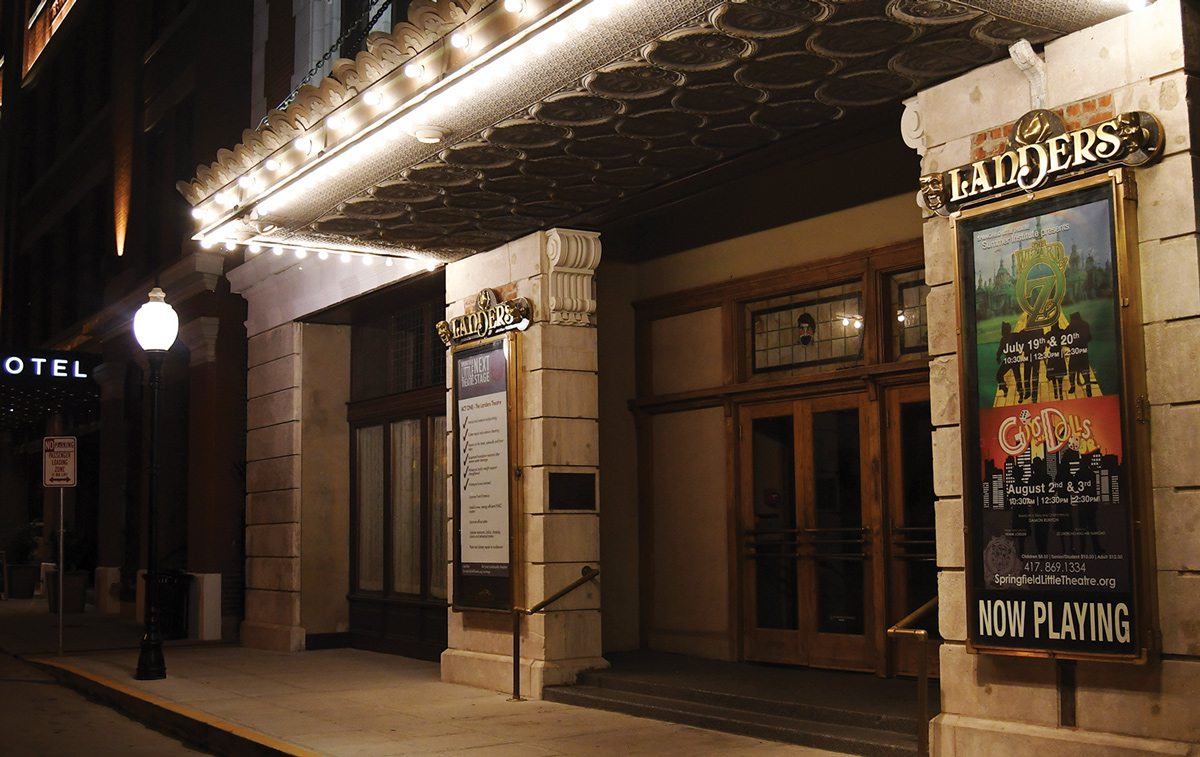 By Brandon AlmsThe Baldwin Theatre burned on January 6, 1909, which led to the creation of The Landers Theatre, which suffered a fire in 1920. And, so, the spookiness begins. Purchase Photo

After 85 years of showbiz, Springfield Little Theatre has become a Springfield staple, but few know what really goes on behind the scenes or how many ghosts are actually floating around the theater. From the best celebrity visits and performances to the ghosts, milestones and biggest expenses, we throw back the curtain and learn about SLT’s little-known facts, mysteries and hauntings.

1. When Landers Theatre was built in 1909, it housed roughly 1,100 seats.
But after renovations and the closing of the second balcony, that number was sliced in half. Today, the theater seats 525. That might sound like a loss for the theater, but it’s definitely a win for the audience. When the seats were renovated in 2011, the original chairs were replaced with larger more comfortable ones to improve the audience experience. 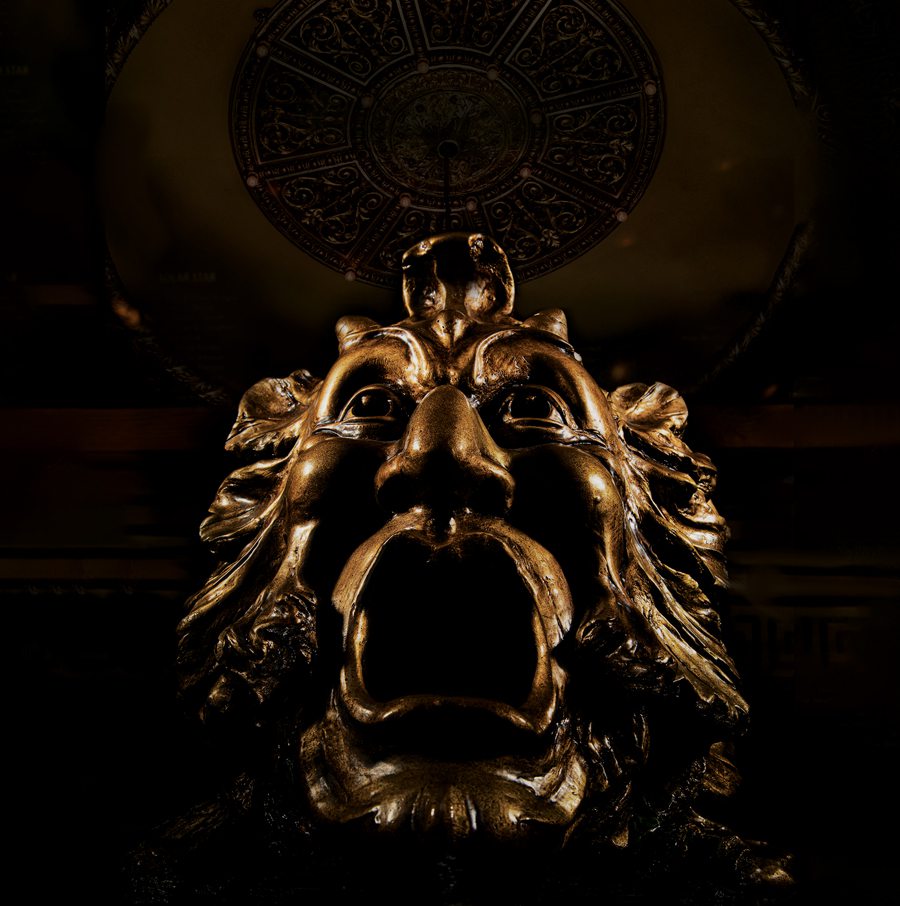 Springfield Little Theatre's iconic gargoyle can be found in its logo and various locations around the theater. 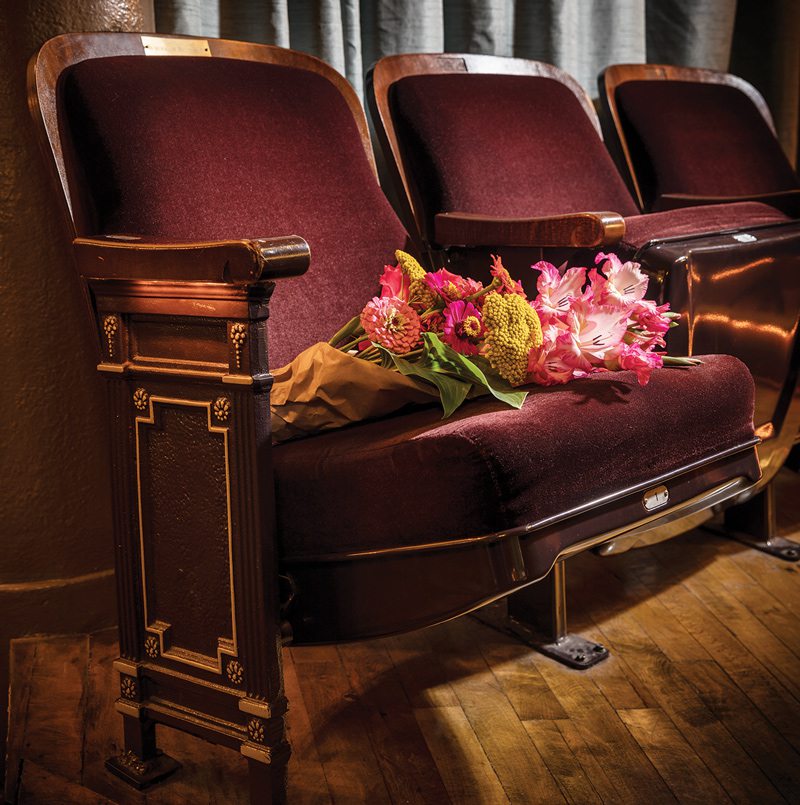 2. You’ve probably heard rumors about the Landers being haunted.
There are quite a few ghost stories circulating around Landers, and it's said that the theater is haunted by not one but three ghosts. There’s the ghost of a Shakespearean actor that supposedly walks back and forth along the windows of the 4th floor. Then, there’s the greenish orb that has been spotted floating around the second balcony. As if that wasn’t creepy enough,  people have reported hearing the sounds of babies crying… and what sounds like mothers gently quieting the children. Yikes! Not everyone has seen each of these ghosts, but Chuck Rogers, scenic designer and technical director, at SLT experienced his first ghost sighting in the building in 1999. “That sighting still unnerves me when I’m at the theater alone,” he says.

3. Landers has welcomed a fair share of celebrity guests over the years.
One of its most memorable visitors was Kathleen Turner. This two-time Golden Globe winner actually performed on stage at Landers. So, who else has made a special appearance at the theater? Let’s see… There was Lucas Grabeel (famous for his role in the High School Musical series), Apollo Robbins aka The Gentleman Thief, and actress Tess Harper who you’ll probably recognize from her roles in No Country For Old Men and Breaking Bad. 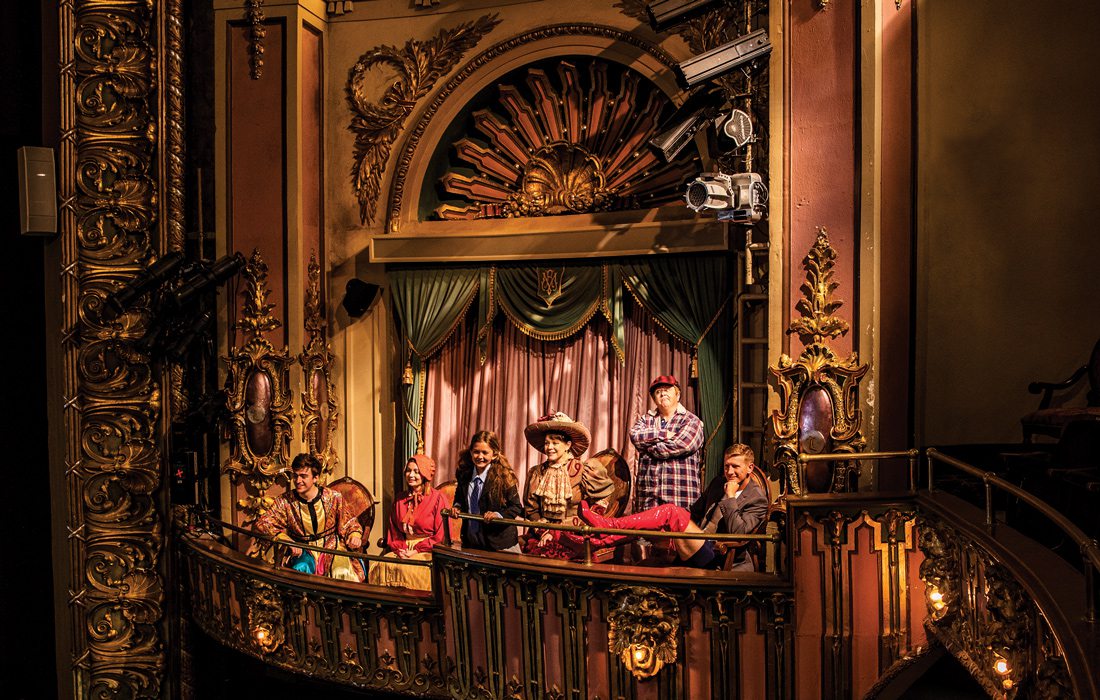 By Brandon AlmsCharacters from most of Springfield Little Theatre's shows this season (Joseph, Little House, Matilda, Dolly Tuna and Kinky Boots) gather up in the box. Purchase Photo

4. Landers Theatre isn’t home to just a few ghosts...
The historic theater also has a resident bat that likes to drop in unexpectedly. Most recently, the bat was seen during a production of The Secret Garden when it very timely flew down during one of the performances when the actors were singing about the bird in the garden. Before that, the bat made a surprise appearance during a rehearsal of I Love You, You're Perfect, Now Change. One of the actors was wearing a lavish hat with fruit on it, and the bat flew down during her solo and perched itself on top of the fruit.

5. When SLT was in the middle of rehearsing Spamalot, a special visitor showed up.
It was John Goodman. The St. Louis-native even hung out at the theater and watched a few rehearsals of Spamalot.

6. SLT’s first show premiered in 1934.
The cast performed The Importance of Being Ernest, and it was the only show that ran all season. That’s because when SLT opened, it only performed one show a year. By 1937, that number increased to four to five shows each season. Today, SLT performs as many as eight mainstage shows each year. 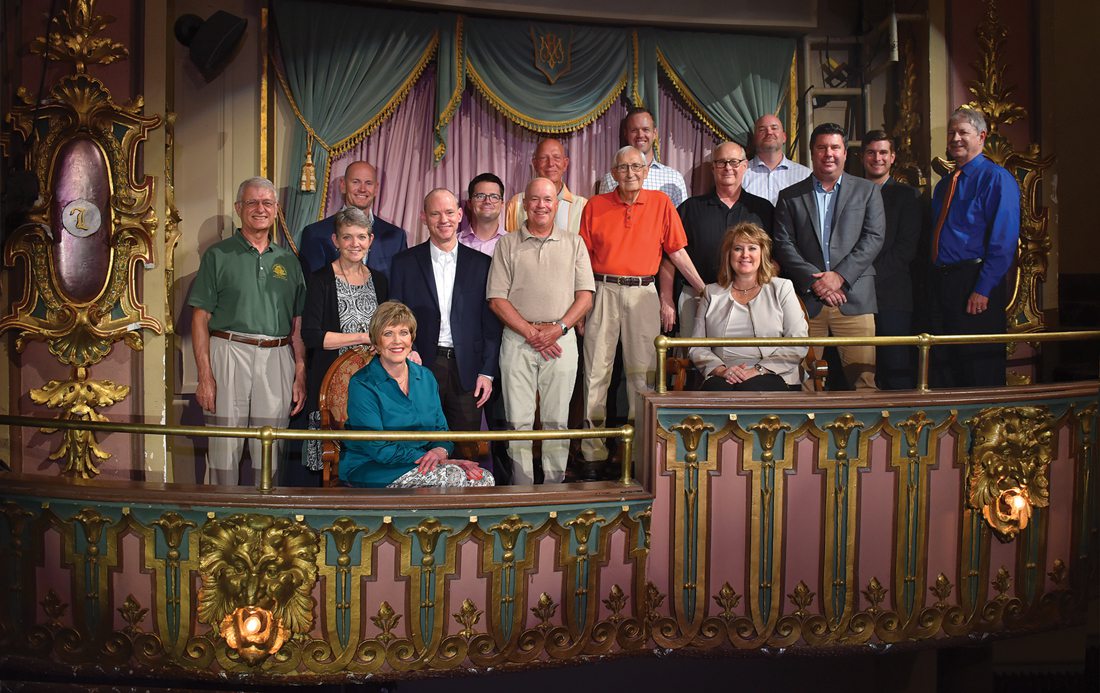 The SLT Board of Directors works on behalf of theater attendees, funders and the community as a whole. 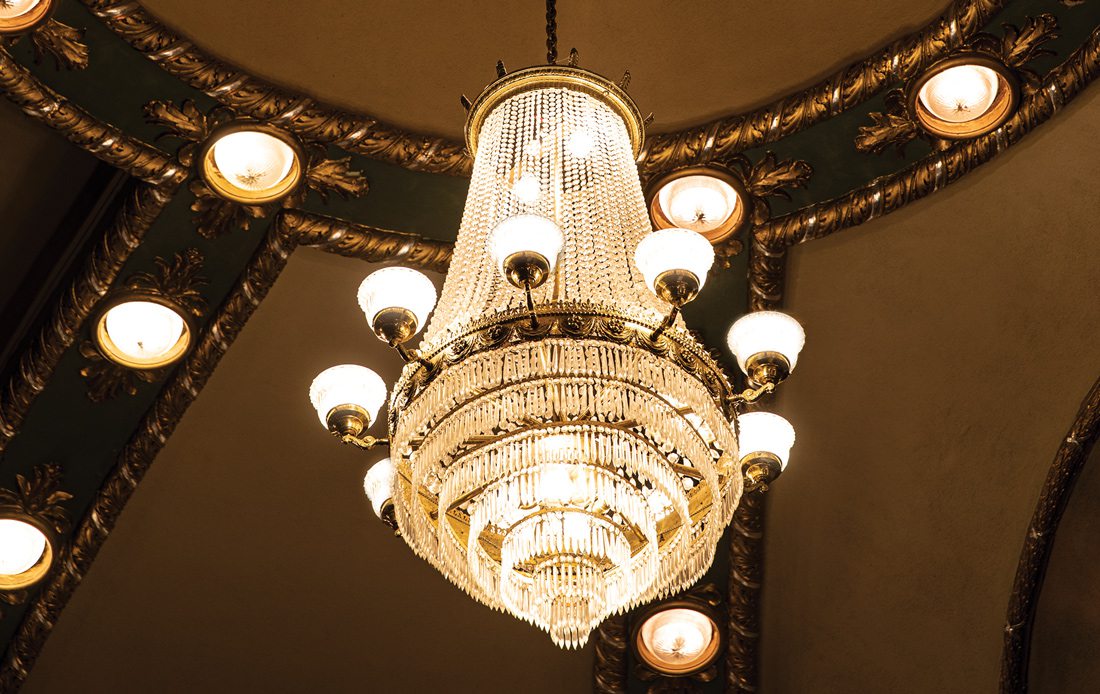 The chandelier was a dedication to a donor family member and was installed after the first one fell from the ceiling.

7. SLT was founded by a group of Central High School graduates.
As a newly founded organization, the group had little to no funding, so to finance the first performance, they went around and asked for $1 donations. It worked!

8. SLT has put on some elaborate, big-name performances.
The most expensive show to date was The Producers in 2009. SLT had to double the set and costume budget to complete the show.

9. Did you know SLT used to perform next door at Hotel Vandivort?
Of course, back in the 1930s, the building wasn’t a hotel. The building was used primarily as an office complex, and both SLT and the ballet used the building for rehearsal space and performances. 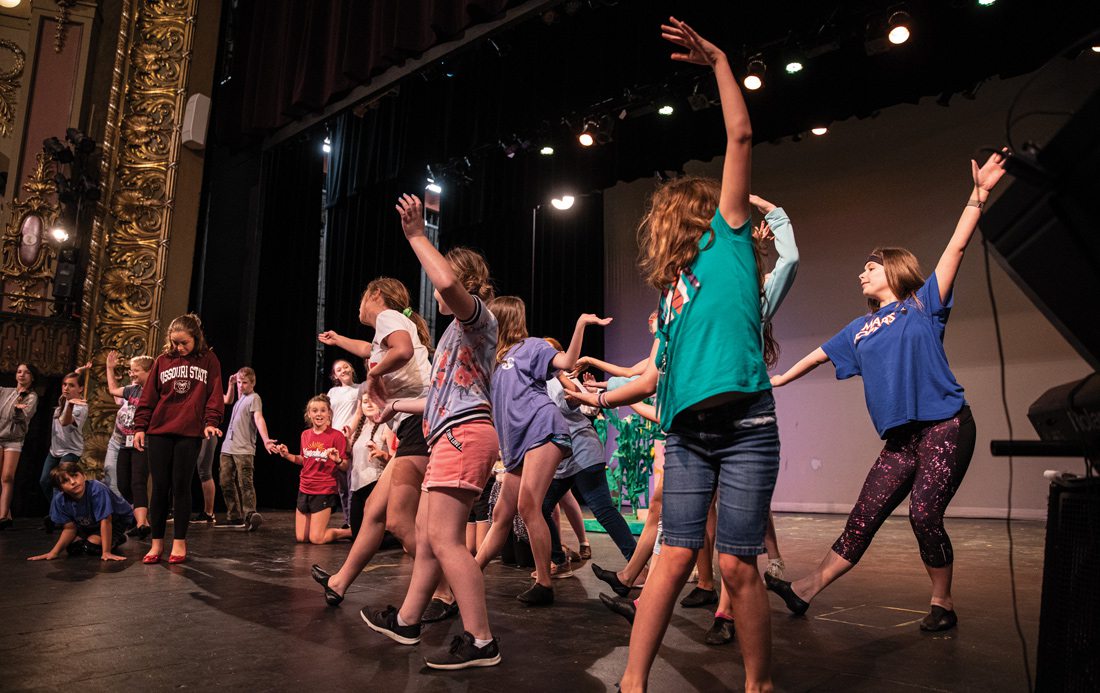 Photo by Brandon AlmsSLT's education department has continued to grow, offering classes and performance opportunities for both kids and adults. Purchase Photo

11. If you’ve ever wondered about the Springfield Little Theatre name, here’s the scoop:
The name has nothing to do with the size of the stage or even Landers Theatre. Turns out, “Little Theatre” is a standard name for community theaters around the country. Look closely, and you’ll see Little Theatres all over the place.

12. The carpet lining the floor inside Landers might look vintage, but don’t be fooled.
The carpet is actually a remake of the original pattern from 1909 and cost a whopping $65 per yard. 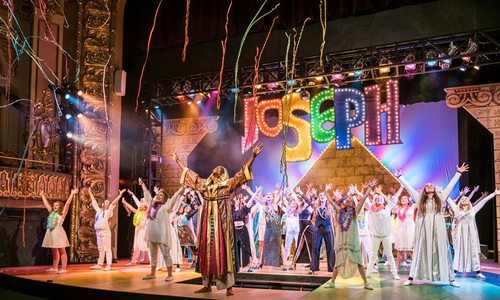 12 Facts to Make You Love Springfield Little Theatre Even More

Springfield Little Theatre has been a Springfield staple for decades, but chances are, there’s a whole lot about this troupe that you don’t...