A little thrift shop in downtown Hollister provides those in need with clothing, diapers and more without asking for anything in return. 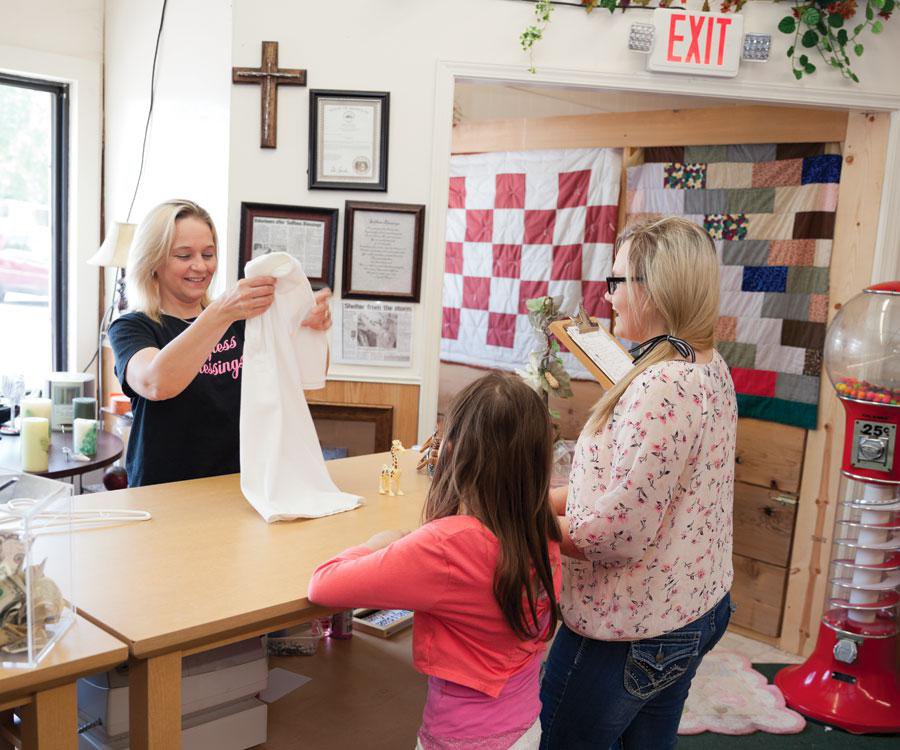 A sticker on the back wall of a small Hollister thrift shop quietly declares, “From small beginnings come great things.” That’s exactly what Andrea Berdine sees each and every day at the shop, appropriately named Selfless Blessings.

The rules at the store are simple: People can come in and choose the items they need or want and leave a donation if they’re able. If they aren’t, they can take the items for free, no questions asked.

“When you get to do something through your heart on a daily basis, it changes you.” —Andrea Berdine

Berdine says Selfless Blessings began when she saw a man without a coat ridiculed for his circumstances. Berdine chased the man down and gave him her husband’s coat and the $7 in cash she had, but she wasn’t satisfied helping just one man when there were so many other people in need.

“This is a beautiful community,” Berdine says. “It’s a place where when you’re standing in line at Walmart and somebody’s short on money, you pay it for them.” But when she saw the way the man without a coat was treated, she felt like she was witnessing a negative change in the community.

Berdine says she talked about her experience on Facebook and received an outpouring of support almost immediately. After getting official non-profit status, Selfless Blessings operated online for 10 months, with Berdine and some friends delivering items out of their garages to people in need in Forsyth, Hollister, Branson and Kirbyville.

Selfless Blessings even helped flood victims after the flood that hit Hollister in August 2013, and moved into a store space in downtown Hollister shortly after to continue helping people after the Red Cross was gone. The store grew and continues to grow, and it even helps pay it forward to other local charities by donating items that are in abundance at the thrift shop.

Berdine doesn’t want to see the giving change. Although it can sometimes be difficult to stay afloat, she says she’s addicted to giving and wouldn’t trade her job for anything.

“When you get to do something through your heart on a daily basis, it changes you,” Berdine says. “Things could get a million times worse, and I would still get up every day and go do it.”

If you are interested in helping Selfless Blessings (153 First St., Hollister, 417-337-0829, selflessblessings.com), the shop accepts time, money or items.