Local glassblowers are dropping their treasures in nooks and crannies throughout 417-land, and local adventure-seekers are hitting the trails to find hidden marbles to call their own. 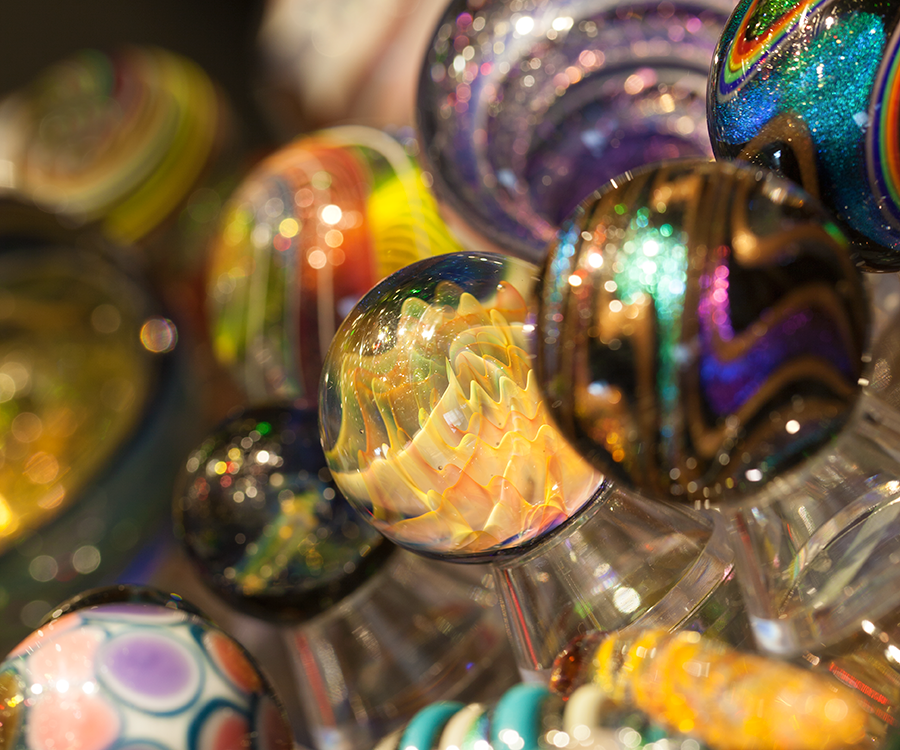 Visit Ozark Marble Hunters on Facebook to join. Once approved, you will receive a message from an administrator asking that you read the rules. Administrators are always available for questions.

It’s midnight on a dreary, rainy night as Will Stuckenberg selects glass rods to make a marble in his Branson suburbs studio. “See that?” he asks. “That bubble? It’s too far up. This one won’t work.” So, he goes through and patiently selects the perfect rods to begin the painstaking process of melting and molding for a marble he will, ultimately, give away. This particular marble will take five hours to create and will have a pink flower in the center, created with white rods tinted with gold leaf. Glass blowing is the ultimate artistic endeavor for the patient perfectionist. Being the son of a sculptor, Stuckenberg is perfectly suited for this modus operandi.

Stuckenberg, an entrepreneur, artist, art dealer and glass blower, is a kind of Robin Hood of marbles: he gives away 90 percent of the marbles he creates by hiding them in the woods for others to find. He sought a way to combine his hobby of finding things with his artwork. As a result, the group Ozark Marble Hunters was created about two years ago. Now, about a dozen area glass blowers and more than two thousand current members participate in “losing” marbles. With 10 to 15 new members daily of nearly every age and from every walk of life, it is beginning to become a favorite pastime for many families in the Ozarks.

“Hey! Hey, you girls! Do you want to see the treasure I found?” six-year-old Ian Freeman asks passersby about a ¾-mile up the Yellow Trail at Busiek State Park. He is with his mother, Melissa; 13-year-old brother, Ben; and five-year-old sister, Ally. While Ian shows off his loot, the others are 10 feet away, digging through leaves by a unique tree. “We’re marble hunters,” Melissa Freeman explains with a smile while she stands and brushes the dirt from her hands. Her oldest son, Ben, has autism and has had a longstanding fascination with marbles. This hobby is a way to keep the family connected. “Having a child with autism has caused my family to naturally be very routine,” Freeman says. “Marble hunting pushes our boundaries in so many fun ways. Stretching our coping skills, solving problems and unraveling clues are just a handful of the ways hunting can push the envelope in the family dynamic and strengthen our bonds.”

The Freeman children have their own ideas as to why marble hunting is fun. “You never know what the marble will look like,” Ally says. Ben fondly remembers a successful hunt. “My favorite part was finding a marble at Jordan Valley Park three days before Christmas,” he says.

Stuckenberg says that for marble hunters, the hobby is a thrill because marbles are valued anywhere from $20 to hundreds of dollars and can take an artist a full day to create. “It’s better than geocaching because you’re finding items of actual value,” Stuckenberg says. 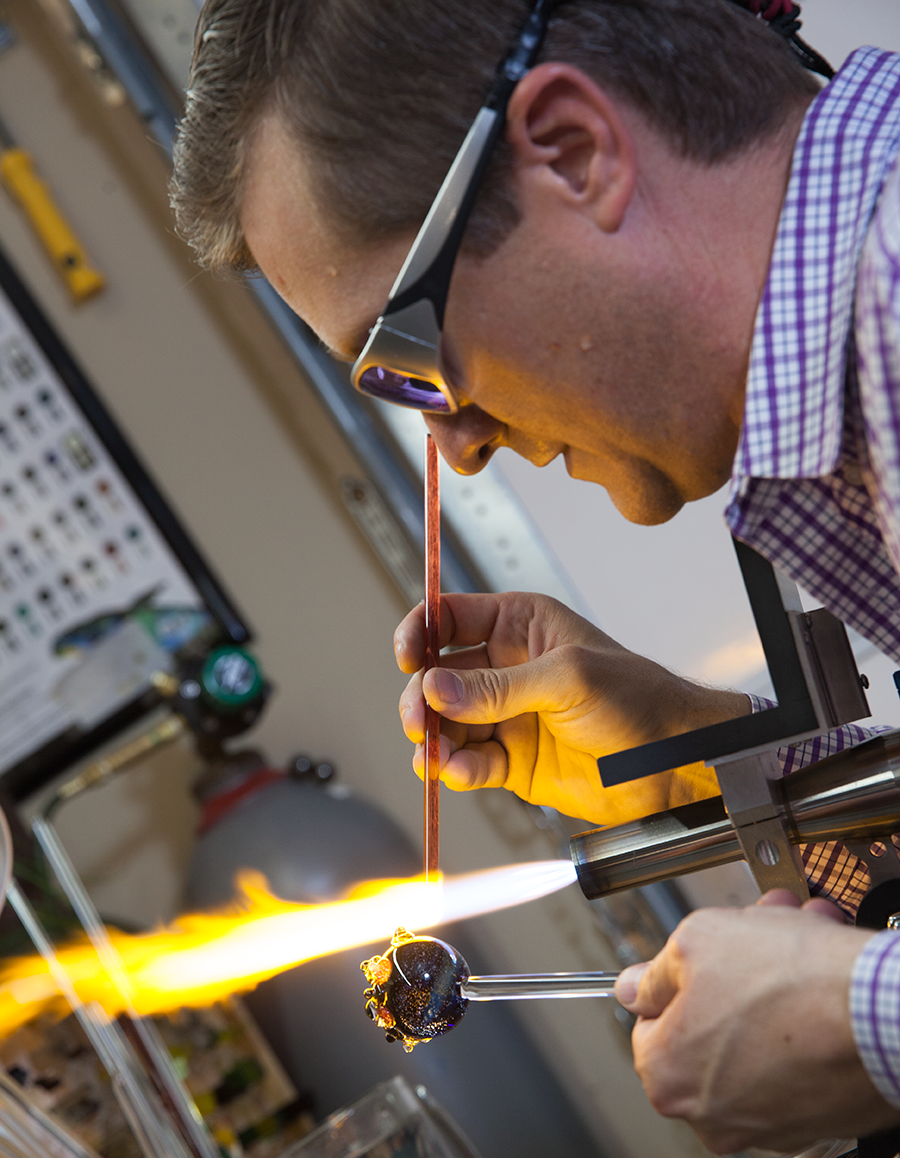 Will Stuckenberg crafts one-of-a-kind marbles out of the studio in his home garage.

Hunters must be willing to boldly go where no marble hunter has gone before—or where twenty hunters might already be searching. GPS coordinates are sometimes provided in the hunt, but some require following good old-fashioned clues. Some marbles are even lost in the water or on islands in Table Rock Lake.

Branson entrepreneur Andy Metcalfe says his favorite hunt took more than four hours of his time, 20 miles of driving and four miles of hiking before he found his marble. He and his son became hooked nearly a year ago when they went on their first hunt at the suggestion of a friend. “It’s really good to get children off the tablets and video games and go out and explore,” Metcalfe says. “This is a wonderful opportunity for me as a father to show my son how to work hard for a reward.”

With around three to five hunts a day during weekdays and about seven to 12 hunts a day on weekends, hunts are taking place in Arkansas, Branson, Springfield, Joplin and even in Kansas City. Some marbles are found quickly, and some aren’t found for months. Hunters stay in the loop on what’s found and not found using social media.

The Art of the Hunt

Not only is the hobby connecting families and individuals to their communities, but it’s causing a renewed interested in what is often an overlooked art form. “No one really thinks about all that goes into glassblowing and the technique and tricks behind creating marbles,” Stuckenberg says.

Glassblown marbles are often slightly larger in size than the machine-made ones many folks remember from childhood. Some get as big as half dollars and larger. The intricate and delicate work is finding new appreciation with a marble show taking place every year in Kansas City. Marble aficionados generally become collectors and sometimes purchase certain marbles as investments. “It’s fascinating to me,” Stuckenburg says.

Freeman was surprised by her children’s reactions to the art form. “What I didn’t think would catch the kids was the massive intrigue and respect that has grown for the marbles we have found and the artists who made them,” she says. “It is truly a testament that this club can instill an appreciation for art and the artist in young and old hearts alike.”

Stuckenberg is pleased at how participants have pulled together to keep the group going. “Members are always paying it forward by re-hiding treasures they have found or by supporting the many great glass artists by buying new marbles and pendants to hide for the group,” he says.