At Mercy Rehabilitation Hospital Springfield, the professionals helping patients regain mobility aren’t always of the human species. A special staff member gives patients a boost, and she does it all with a tail wag. 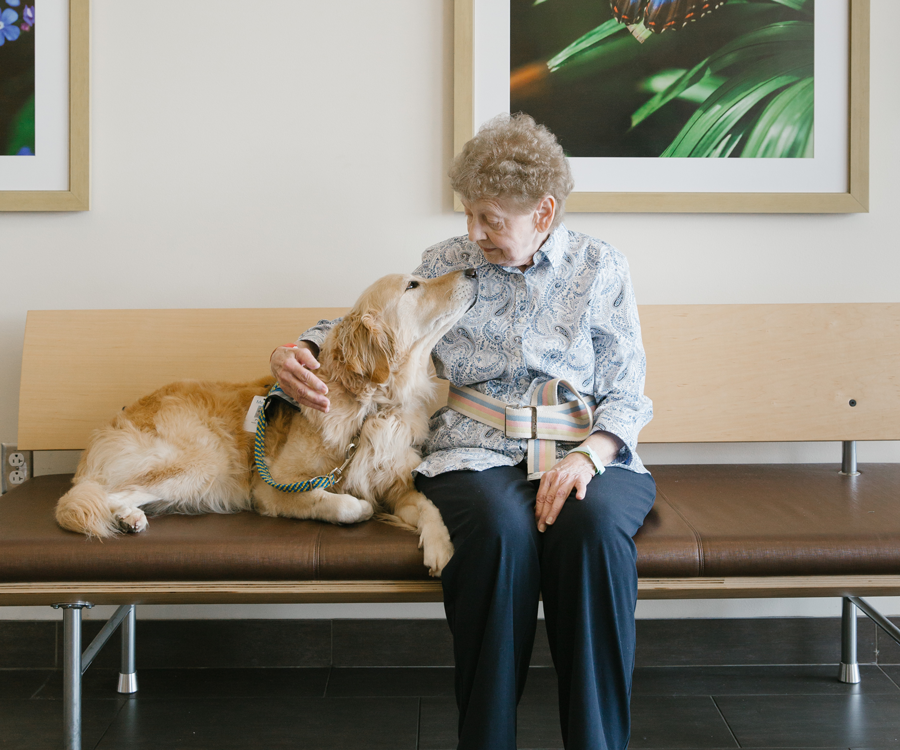 Photo by Brad ZweerinkPria is helping patients like Jacqueline Ramage get back to health at the Mercy Rehabilitation Hospital.

Pria’s morning begins like everyone else’s. She wakes up with her family, sees the kids off to school, woofs down breakfast then leaves for work. Like most of us, Pria has a full-time job, which she’s held since 2013 at Mercy Rehabilitation Hospital Springfield. Unlike most of us, Pria has four legs and a tail. That’s because Pria is a 6-year-old golden retriever–Labrador retriever Canine Companions for Independence Facility Dog. Pria works alongside physical therapist Caitlin Buening to maximize the patients’ physical recovery. We met up with the pair one morning to see how Pria works her magic.

Around 9 a.m., Pria and Buening greet their first patient, Jacqueline Ramage. Ramage suffered a stroke and is regaining strength on the left side of her body, so her exercises deal with balance and endurance during walking and standing. First, Buening places a handful of plastic rings on the ground. Pria picks the rings up off the ground—Buening says she can pick up items as thin and as smooth as a credit card—and passes them to Ramage, who then threads them onto a small pole. In many cases, exercises like these educate patients about how an assistance dog can help them in their life post-recovery. Even for patients like Ramage who wouldn’t need an assistance dog, having Pria to focus on means they’re not preoccupied with their own wobbling or discomfort.

After a short jaunt through the hallways with Pria to practice walking with and without a walker, Ramage and Pria play fetch. “People stand longer if they’re doing something,” Buening says. Playing fetch helps Ramage increase her ability to stand for everyday tasks like brushing her teeth, cooking or washing dishes. In addition to her practical benefits, Pria brings a much-needed smile to patients. “People just perk up when they see her,” says Ramage’s daughter Jill Knutson. “It really is therapy. It makes you smile, and they need to smile.”

Before coming to Mercy, Pria trained rigorously at Canine Companions for Independence (CCI), a nonprofit organization that breeds, trains and pairs assistance dogs. CCI also supplied Mercy Springfield’s other facility dog, Niles. “He’s Pria’s boyfriend, much to his dismay,” Buening says with a laugh. “She’s much more forward.” Facility dogs are trained to work with a facilitator in a health care or education setting, according to CCI. Pria has mastered 40 working commands that include practical skills such as opening doors and retrieving items.

Pria comes into work with Buening every day—she even has an official Mercy name badge—and has become a welcome addition to the hospital. But it’s not all work for Pria. “She gets to be a regular dog at home,” says Buening, who has two other dogs who, unlike Pria, are unemployed. While at work, Pria is calm and slow, especially when working with patients re-learning how to walk. 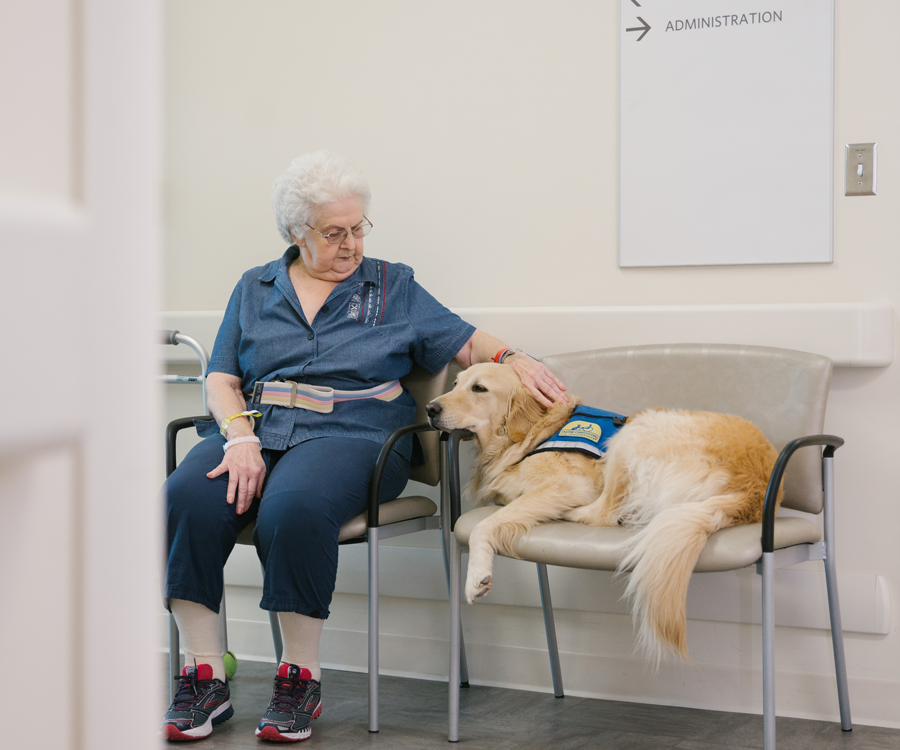 Pria’s second patient this morning is Doris McCord, who is recovering from a hip fracture. Like Ramage, McCord is regaining her balance and standing endurance, and she spends six minutes standing while brushing Pria and giving her a belly rub—quite a feat for someone recovering from an injury that drastic. “It’s relaxing,” McCord says. “You forget the pain you’re having.” Later, McCord walks around with Pria by her side. McCord has Pomeranians at home, so she practices moving while having a furry distraction bustling underfoot.

Aside from her rigorous work, Pria provides a welcome morale boost. “She has a week’s worth of Halloween costumes,” says Buening, who dresses her up for every holiday. Mercy spokesperson Sonya Kullmann adds that facility dogs help younger patients and children acclimate to a hospital environment, which can be frightening. “They’re probably the least familiar with the hospital setting out of all of our patient populations,” Kullmann says.

Pria has full days of assisting patients ahead of her, and Buening says she and Pria will continue to work together as long as Pria is physically able to. After that she will get to relax at home just like Buening’s other dogs. Pria has many years until her retirement, but until then, she’s got her hands—er, paws—full, cheering up patients and making their recovery a little more bearable. 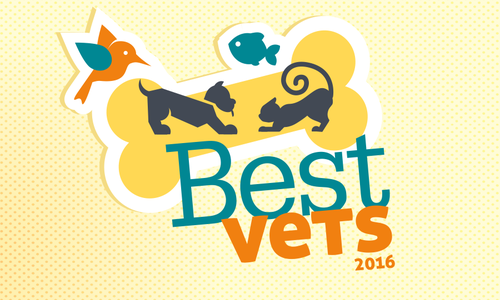 When it comes to giving pets medical attention, you want the best. Our readers have nominated the most caring and qualified vets and animal...