Learn to Play Ice Hockey with the Park Board

The Park Board’s Learn to Play Hockey sessions welcome people of all ages to brush up on their skating skills. 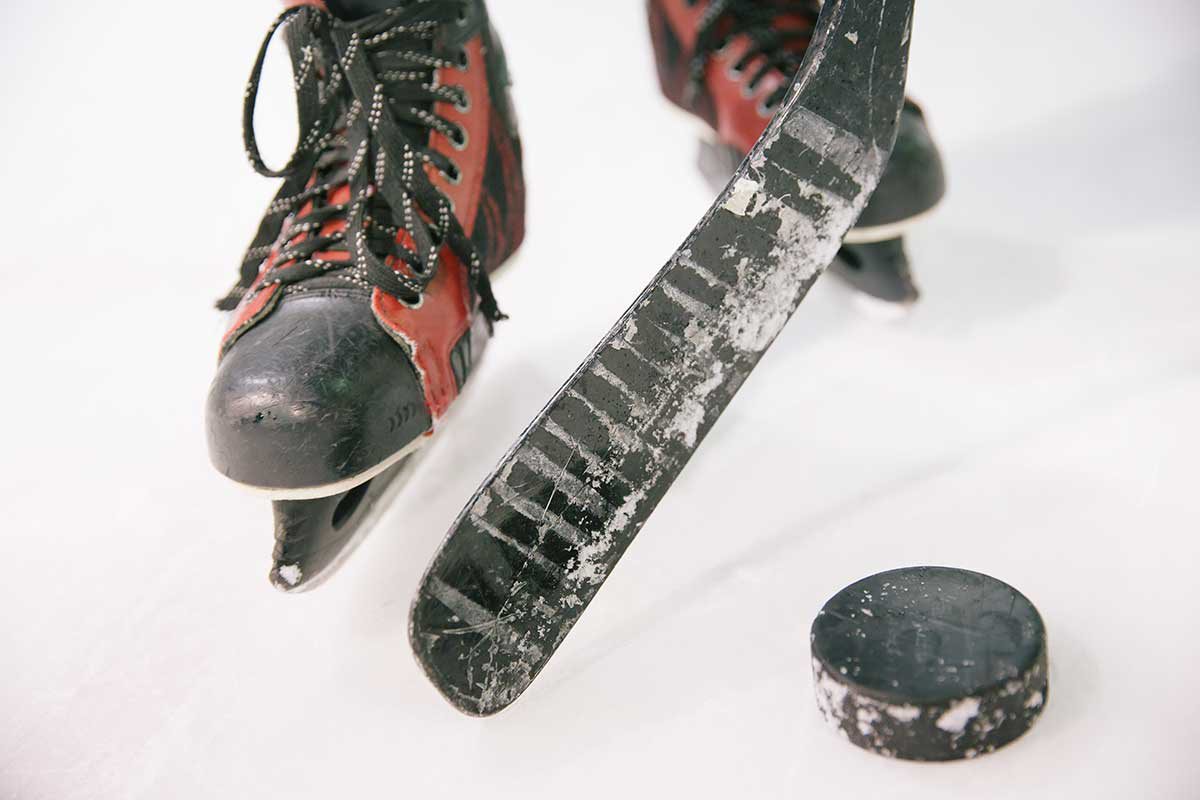 Photo by Brad ZweerinkBrett Houston and his fellow instructors make sure to give lots of encouragement and helpful tips during the hockey lessons.

Every Christmas my family visits Steinberg Skating Rink in St. Louis’s famous Forest Park. There are 10 of us, and I like to think I lean toward the more skilled end of my family members when it comes to free skating. But my dad can reach top speeds I can only dream of, and my sister’s boyfriend has experience playing hockey. I am in awe of his ability to skate circles around the rest of us and to stop so suddenly, so I decided to try one of the Park Board’s Learn to Play Hockey classes to brush up (and maybe show him up) before the holidays.

Before I stepped through the door, I was intimidated. I had no hockey skills prior to class and I was sure my lacking skills would be painfully evident. The class is open to all ages, even as young as 3 years old, so I walked into Mediacom Ice Park following little tykes.

The front doors open to a large lobby with plenty of benches so everyone has a place to sit. The place was filled with both young and older hockey players—adults suited up in gear I cannot even name. Youngsters eagerly laced up their skates and strapped on their helmets.

Walk deeper into the building and a small hallway leads to all the locker rooms. Even with the amount of people in attendance, I was surprised to find there were plenty of cubbies still available for me to stash all my belongings. Once I was finished, I walked out of the locker room and headed toward the multiple doors leading to the ice. 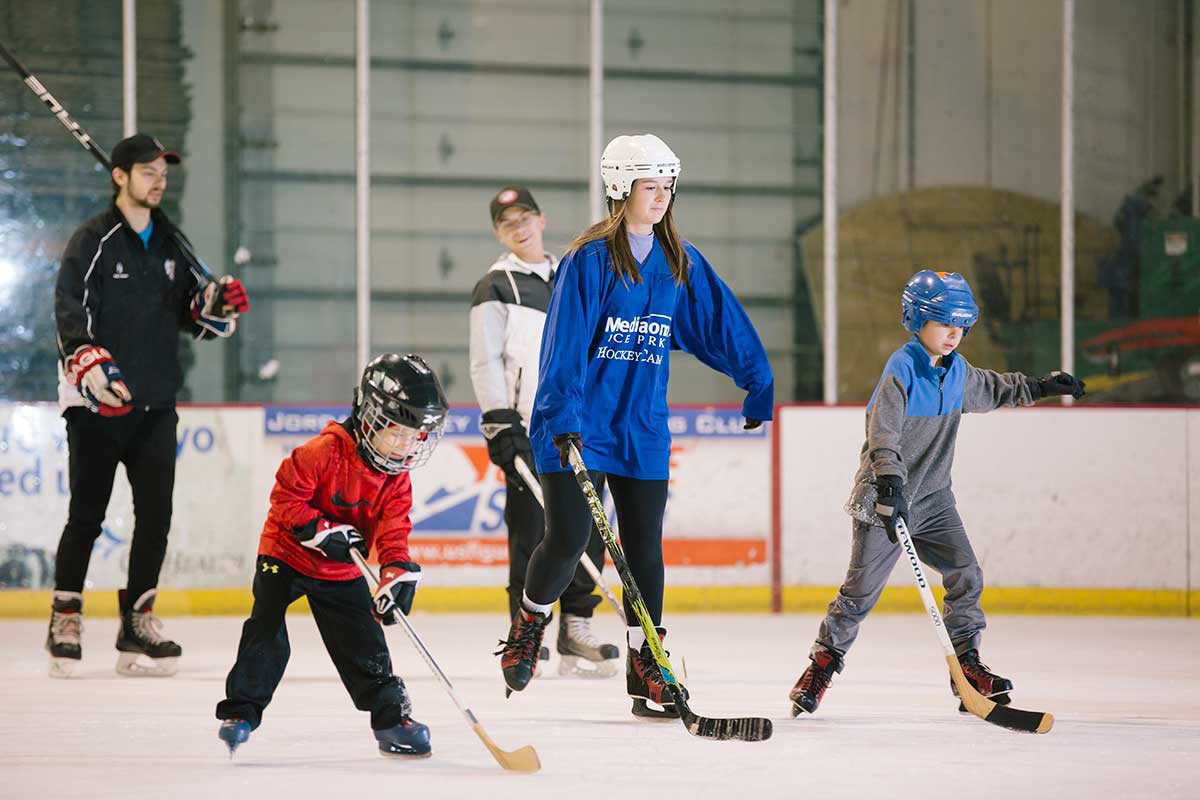 Photo by Brad ZweerinkJenna and her classmates practiced drills to teach them how to glide down the ice, stop, skate figure eights and more.

I arrived early to the Level 2 class, so one of the three instructors, Brett Houston, allowed me to skate around before my fellow classmates took the ice. I was put into the second level because I had experience with skating but none with hockey. I gripped my hockey stick as I glided around and was shocked at how just holding this long, gangly thing added difficulty. After a few minutes, I was gliding semi-smoothly, so I asked Houston how to shoot. He showed me the method: Stand with the puck to the side, slightly behind me. Use my wrist to direct the end of the hockey stick over the puck, turning the stick the opposite way as I move the puck forward and shoot.

The motion was difficult. Houston told me even after playing hockey for 13 years, he still had trouble with shooting sometimes (even though five minutes before he had quickly scored a goal with ease).

By this time, my fellow classmates, including two adult men and three kids younger than 10 years old, were taking the ice. We lined up against the wall and started a series of drills.

“Watching the instructors was endearing. Their encouragement helped the child make it halfway and back, and at the end, Houston gave him a high-five.”

The first focused on skating. We pushed off one foot and practiced gliding down the rink, going down and back, then switched feet and repeated the process. The motion felt funky at first, but I gradually got the hang of it with the encouragement of Houston and the other two instructors, Zane Brewer and Zane Werner.

We moved on to practicing balance. We turned to the side and stepped one foot over the other, walking the length of the rink. I have to say that I did excel, but one of the kids was not so lucky. He had trouble stepping one little skate over the other, and Houston and Brewer immediately encouraged him to keep trying. Watching the instructors was endearing. Their encouragement helped the child make it halfway and back, and at the end, Houston gave him a high-five.

We moved on to practice stopping. Since my method is crashing into one of the rink’s walls, I was at a loss for how to begin. The first time I tried, I wobbled and came close to falling. Slightly embarrassed, I asked Werner what I was doing wrong. He told me to crouch low and sure enough I did better. By the last cone, I stopped almost gracefully and again received the never-ending praise and encouragement of all three instructors.

One of the last drills we practiced was skating in a figure eight. I watched as one of the instructors demonstrated, placing one foot over the next as he gracefully completed one circle and then another. Wanting to mimic that motion, I asked how to do the movement but didn’t even come close to achieving it. I practiced a few times before finishing the drill and completing class.

I left the rink feeling proud of myself. Before class, I had been nervous about learning a new skill, but the instructors made me feel so welcome—and not at all incompetent for my lack of hockey knowledge. Plus, I never felt sore. Slightly warm from the drills, I silently congratulated the Park Board for their one-of-a-kind inclusive program. 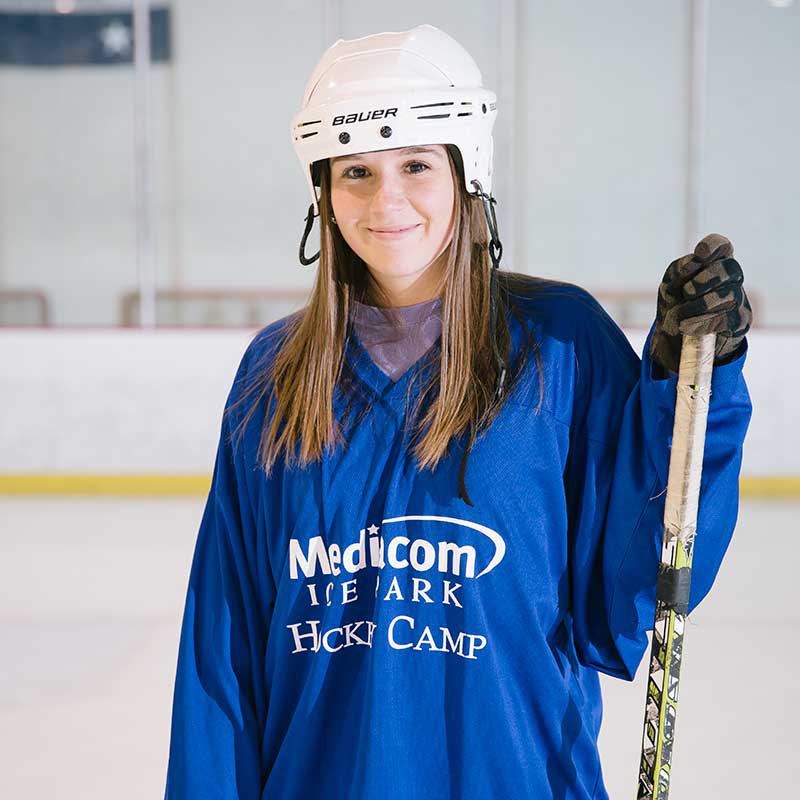 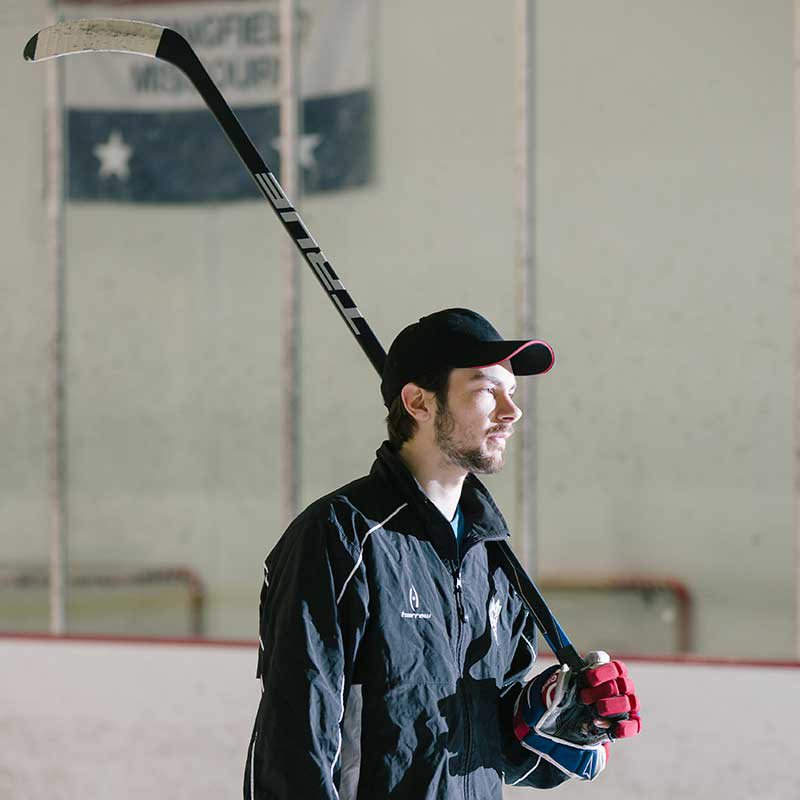 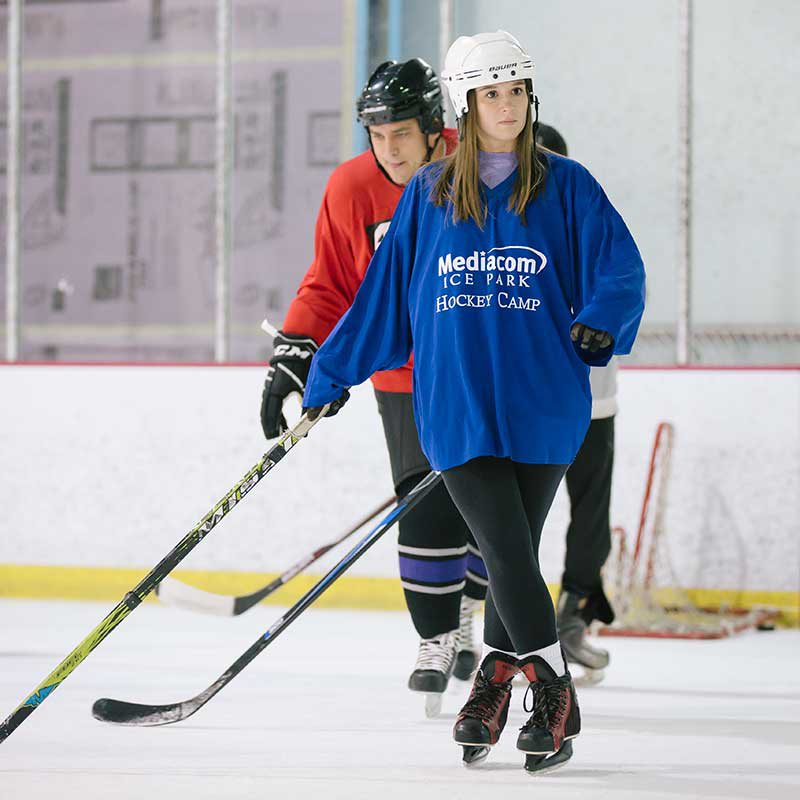 Photo by Brad Zweerink Jenna has experience skating but not playing hockey, so one of her first questions was how to shoot the puck. 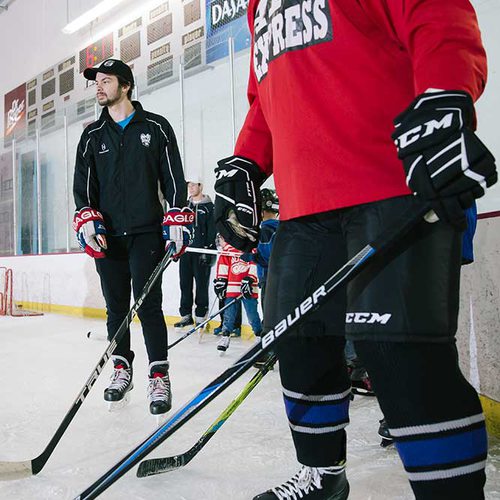 Experience the Lesson for Yourself

The class: Learn to Play Hockey
Price: $90, eight-week session; $16, USFS Membership that pays for insurance
When: Tuesday, Thursday, Saturdays with times varying
Don’t forget: long pants, long sleeves, gloves
Before you go: There are four levels to choose from based on your skill at skating and with hockey. First-time students should call hockey director Al Valdivia to decide which level is best for them. Also note that the $90 session fee includes all equipment and eight free public skating sessions. 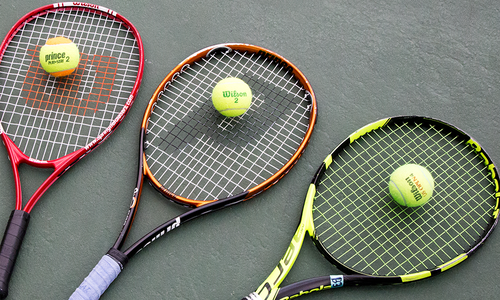 Looking to up her game, writer Stephanie Towne Benoit took a swing at private tennis lessons at Cooper Tennis Complex.