Meet the pint-sized actor whose career has already taken him from the stages of Springfield all the way to a touring production of Elf the Broadway Musical. 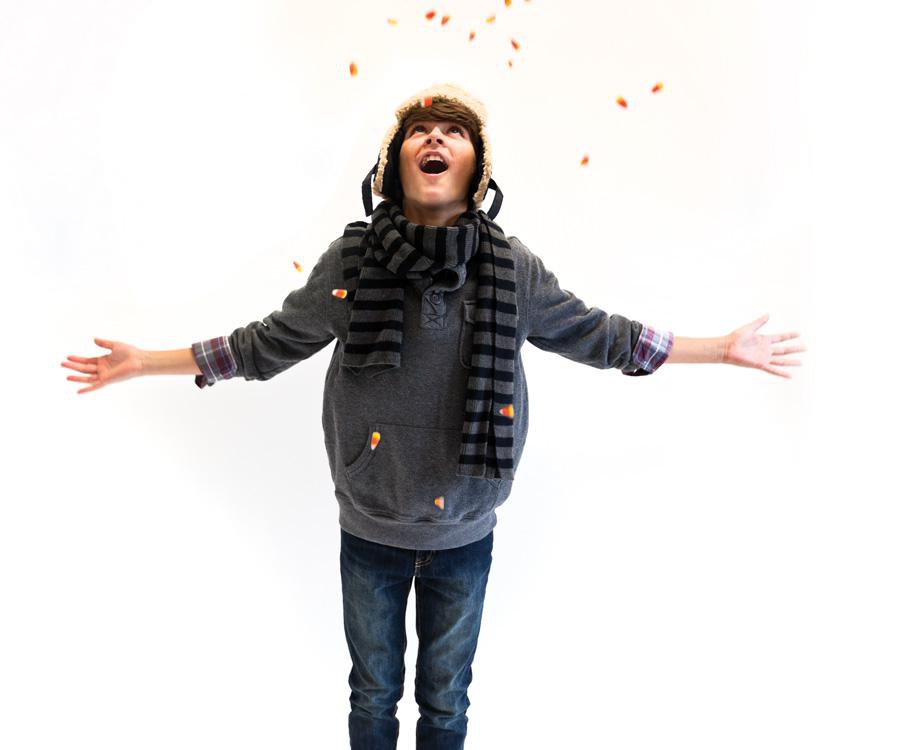 It was a process that started in March with a video audition, which was followed by an in-person audition in New York City, then one more audition two weeks later, which turned into another the next day. “Then we didn’t hear anything, so we were like, ‘Oh, I guess we didn’t get that,’” explains 12-year-old Springfield-based actor Harper S. Brady. “Then we heard.”

Brady finally got the phone call in August inviting him to play Michael, Buddy’s brother, in the touring production of Elf the Broadway Musical, based on the film starring Will Ferrell. This would be a strenuous and exhausting process for any actor, but especially so for a 12-year-old. Brady is already a veteran of local and regional theatre, though, and he has an uncommon work ethic. “He works harder than most adults,” says Brady’s mom, Tonya. “He trains in voice acting and tumbling, he dances weekly, and he pushes himself. He’s so dedicated.”

Although he’s still young, Brady has come a long way from his first audition at 6 years old where he sang “Zip-a-Dee-Doo-Dah” for a role at the Springfield Little Theatre, and from the four other auditions before he finally landed a role. Before his recent break, he also had played Tiny Tim in A Christmas Carol at Silver Dollar City, as well as a role in Les Misérables at the Lyric Theatre in Oklahoma City.

Although busy, Brady still has time to play in the yard with his older brother Tanner, learn magic tricks and build with Legos. But it’s acting that is his focus now, and he hopes it will be for a long time to come. After rehearsals in New York City in October, he’s out traveling through Christmas with Tonya and the cast—from Grand Forks, North Dakota, to San Francisco, California, and many places in between.

417 Magazine: What is your favorite role you’ve had?

Harper Brady: Tiny Tim at Silver Dollar City. It was fun working with all the other professional actors.

H.B.: Mostly anything from Les Misérables.

417: What is your favorite Broadway show?

H.B.: Newsies. I’ve auditioned for that one two times, once on Broadway, and once for a tour that came up, but I think I’m a little too big for it now.

417: Any secret for memorizing lines?

H.B.: I read it over and think about how the character would be.

417: Have you ever had a moment where you’ve totally forgotten a line?

H.B.: I don’t think I have missed a line, but I did get the first and second verse of a song mixed up once.

417: What was your favorite toy as a little kid?

H.B.: Legos. I have lots of superhero Legos, Lord of the Rings, a Lego train...

417: Do you prefer singing or acting?

417: Do you like radio songs or songs from
musicals?

417: What are you looking forward to most on your tour?

417: What is your favorite quote from Elf?

417: If your parents were gone for a weekend, and you are home by yourself, what would you spend most of your time doing?

H.B.: Playing Xbox with my brother or playing with Legos.

417: Who is your favorite teacher?

417: What are you looking forward to most in New York City for rehearsals?

H.B.: I’ve been there five times before. I like to see all the different shows, and all the billboards that change like every week.

417: Do you have a favorite audition?

H.B.: The OKC Lyric Theatre audition for Les Miserables, and the callback for that. I felt really strong about my audition, and they seemed to really like me. They smiled a lot.

417: What advice would you give to younger
actors?

H.B.: If you want it, go for it and work really hard. There’s nothing that can stop you. You will get told “no” a lot, but don’t let it discourage you.