We sat down with Missouri State Bears Head Coach Dave Steckel to talk about the upcoming season and all other things football. 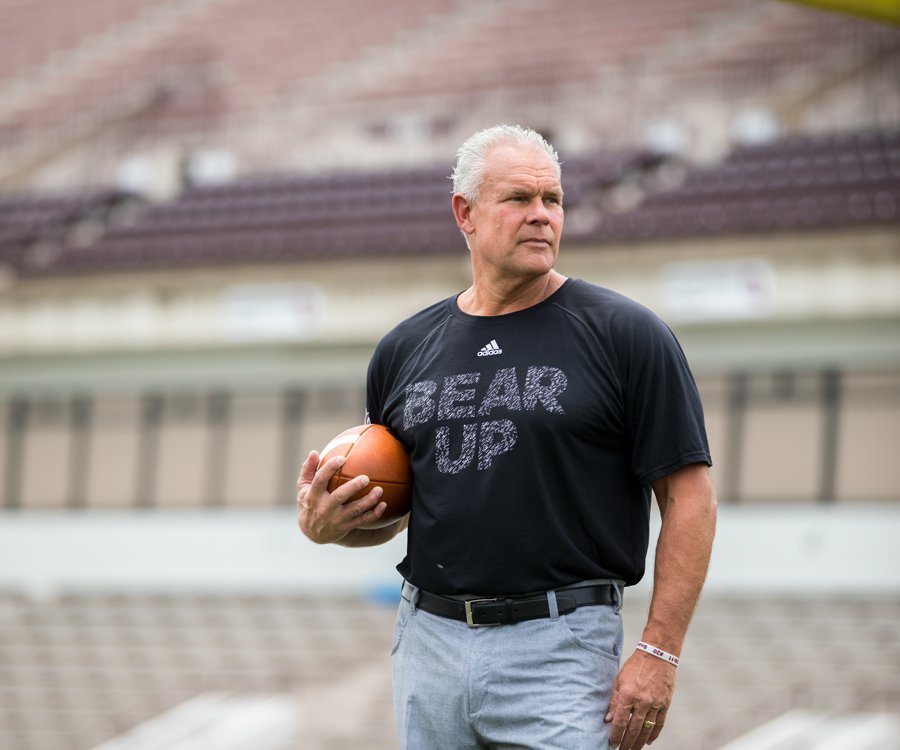 Photo by Brandon AlmsMissouri State University head football coach Dave Steckel —known as Coach Stec—embodies the definition of Bear Up as he looks forward to the upcoming season.

417: A lot of 417-landers are excited for the Mizzou/Missouri State season opener. How are you feeling about it?

D.S.: My first thought when I think of that game is that I’m really happy for all of our alumni down here in Springfield because, I’m not good with dates, but I think it was 1926 or 1923 or something; they haven’t played since then. The feedback we got when we arranged it was really exciting—it was fantastic from the alumni. Now that it has become a reality I got a lot of work to do, because they’re a good football team.

417: When you say alumni, are you talking about Mizzou or MSU?

417: You spent 14 years in Columbia. What else are you looking forward to on your trip back?

D.S.: When we go up there, it’s all business. When we roll in, it’s time to walk around the field, go to meetings, have our pre-game dinner, watch video, go to bed, get up. But I will say that one thing that I’m really excited about is—in fact I actually made a call this week to Mike McHugh, a good man, director of Football Operations up there—I said, “Hey Mike, I need help, man. In 14 years up there, I have never ever been in the visitors’ locker room, and I hear it’s really bad.” He said, “Oh yeah, Stec. It’s bad.” So, I’m kinda looking forward to seeing the visitors’ locker room because I never ever walked in it in all that time.

417: Are there any particular players we should watch?

D.S.: That’s like saying, “Who’s your favorite son?” you know? I know this, players who have stayed here all summer—this is our third summer of summer football that they have stayed together, building chemistry, some of our highlighted players from the past like Malik Earl, Deion Holliman, Colby Isbell, Calan Crowder—they’ve grown up through the program, going up to our third year with us, so I’m expecting big things out of them.

D.S.: What it means to me is what it means for our football team, and it’s been defined. The definition is to support and encourage, to show courage, resolve and strength and to have a great work ethic. That’s what it stands for for us—the players, the university. Then we take it the next step further in that I want the players to be academically responsible and socially responsible and to be very, very competitive. And that’s exactly what “Bear Up” means to us. In fact, there are signs that hang in our locker room and our weight room that share that definition.

417: Do you have any pregame rituals?

D.S.: Absolutely, absolutely. What I try to teach the players is preparation and being consistent with that preparation, so I’m smiling because you call it rituals and I call it preparation. In my mind I go through the same things I’ve been going through for 34 years to prepare myself mentally—now that I’m an old guy and I can’t hit anybody anymore, I’ve gotta prepare myself mentally. The first thing I do is, I gotta go read my old history book because the guy upstairs knows that I need a whole lot of strength just to get through a football game. Then, just little things. I’ll walk around the field to try to focus in my mind. I’ll check the wind and the sod—stupid little things like that that become a little ritual. I’ll ask my special teams coach, “Which way should we kick?” before every game, and I’ll eat the same meal.

D.S.: A little bit of eggs, a little piece of chicken and some orange juice. I’m into the chicken family.

D.S.: Good luck? I think good luck is when preparation and opportunity meet each other. The more we prepare, the more opportunity we get and the better our luck will be.

417: If you were still a player today, what would your warmup song be?

D.S.: That’s an easy one for me. I’m a Bruce Springsteen guy. “Born to Run.” Tramps like us, baby we were born to run.

D.S.: That’s a great question, and I wish I really did know the answer to that. A lot of studies are being done about head and body injuries and stuff like that, so I don’t know where the future of football is going to go in that regard. But the thing I know from being around—and I firmly believe this—if you ask, probably 99 percent of everyone who has played high school, college or pro football would go sign up and do it again. The emotional high, the camaraderie, the fraternity atmosphere of the locker room—when you come back in contact with all these old former players and talk to them over the years, all they want to talk about is their glory days. Springsteen hit it right on the glory days. I think the game of football is taking great safety precautions. I think it’s the greatest sport in the world. And I think people are going to prepare properly and coach properly using great fundamentals. I think it’ll continue to be a great, great sport.

417: What are you looking forward to this season?
D.S.: What I’m looking forward to, without it being coach talk, is improvement. Improvement from year one to year two. We have to continue to execute the plan that we put in place two years ago. It’s a long, daunting process, so every day we have to get up and show improvement—especially sustainable improvement.

417: How do the players feel about the Missouri State/Mizzou game?
D.S.: Right this second, we haven’t talked about that particular game yet. I think what’s very important as the season goes on, with all the distractions of this game and playing up at that level and more distractions because of who we’re playing, they have to understand that’s part of our plan. They have to understand we have to prepare and do all the little things, even with all the distractions.

417: Alright, let’s talk about Deflategate. Whose side were you on?
D.S.: You know what, I didn’t follow it closely enough, to be quite frank. A lot of my friends tease me when football season comes—I go into my cave—which is true. But of the little bits and pieces I did see, I thought, well, they deflated the ball in the second half, I believe. They found that they deflated it in the second half, and didn’t they score like, 40 points in the first half? So, I think it was a much ado about nothing, personally, but I really can’t speak about it because I was in my cave.

417: Who’s your favorite NFL team?
D.S.: My favorite NFL team is, number one, anybody that my former players are playing on. So, like, for example right now I’m a big Houston Texans fan because Dylan Cole is there. My nephew is the assistant wide receiver coach at the Tennessee Titans, so I follow them. But I just cheer and really watch and pray that my former players do great and make a great living at this sport.

417: Who were your favorite players when you were little?
D.S.: I liked Chuck Bednarik because I grew up in Pennsylvania and he played for Philadelphia. Chuck Bednarik, God rest his soul, was known as Concrete Charlie. He grew up in our area. He was the last two-way player in the NFL, actually. I was blessed when I coached at Lehigh University to get to know him, because he retired there in that area. It was like my little kid idol, and then he was standing there watching me coach. That was kind of cool. Then as I got a little older I was a big Chicago Bear fan with Dick Butkus and Gale Sayers.

417: Do you have any favorite memories from when you played?
D.S.: When I played, one great thing that always comes out in my mind—it was a long time ago—we won the first championship at Crickstown State College back in the day. That was a blessing—a very great blessing—when I played college football. The other memory that I have now, now that I am getting old, is what I just talked to you about, the glory days. This summer I ran into five or six old players and we just talked about old times, winning championships and, for lack of a cliché, all the blood, sweat and tears. The camaraderie of football brings men together in a way that a lot of things can’t. There’s something really special about it, and I hold dear to it. I’m really blessed that I could be a part of a team for so long. 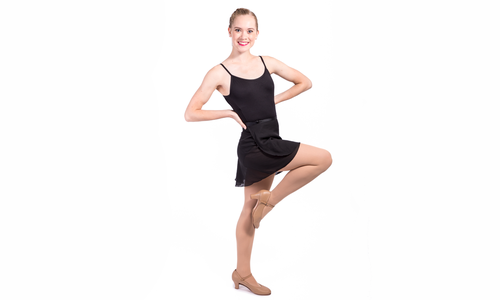 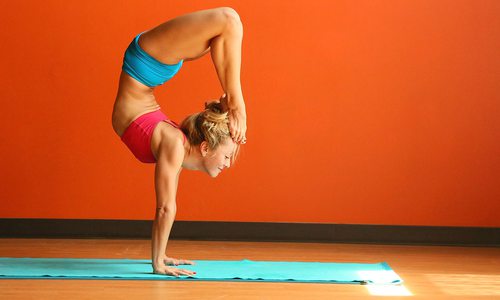 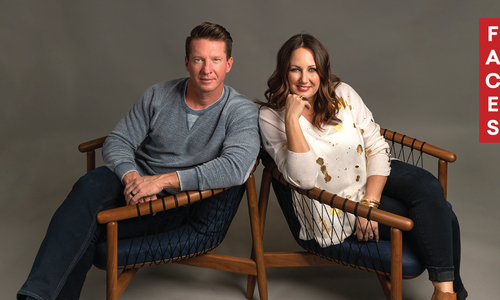