Papa Green Shoes is the newest project for Jody Guy and Stoney Lee. 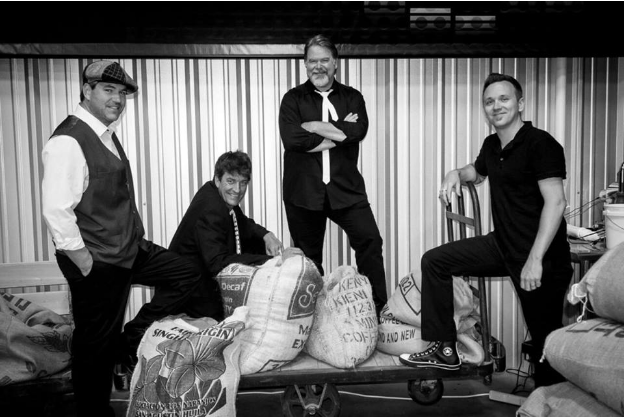 Stoney Lee Cottengim (left) and Jody Guy Cottengim (second on left) are a pair of apples that didn’t fall too far from the tree. They are the founding members of Papa Green Shoes, named for their father and long-time Ozarks blues performer Jimmy Guy Cottengim. Papa Green Shoes is the newest project for Jody Guy and Stoney Lee. They are still active with Tripwire Blue Band, a veteran band of 17 years which has reached the semifinals of the International Blues Challenge five times. Joining the Cottengim brothers to form Papa Green Shoes are Dean Dazey (bass) and Casey Kavanagh (keys and saxophone). The self-titled album is the first from Papa Green Shoes. It translates the group’s live energy from the intersection of blues and up-tempo funk with plenty of studio sheen. “Polk Salad Annie” opens the 11-track album with a twang of country. Styles really bleed together as Kavanagh rips the first of several sax solos spotted throughout. His scale-climbing solo on the group’s cover of Talking Heads’ new wave classic “Burning Down The House” turns into a call-and-response with guitarist Stoney Lee. The group shares lead vocal duties providing a variety of lyrical context. “I Wouldn’t Treat A Dog” is the album’s nearest down-tempo cut; a clean guitar solo shimmies across a roots rhythm as PGS explores even more of the style landscape. The album’s closing number, “Number One Lovin’ Man” exemplifies the mixture of grimy blues and studio polish. The track is driven by a filthy guitar riff that mingles with ambient slide guitar while cleanly produced vocals plead for the top spot of a romantic totem pole. Order a physical album online or pick up a copy at a show. Papa Green Shoes plays Thursday night at Classic Rock Coffee Company.