Our fearless senior editor puts on her bravest britches to try out the many obstacles at Warrior Sports, Springfield’s new indoor obstacle course gym. 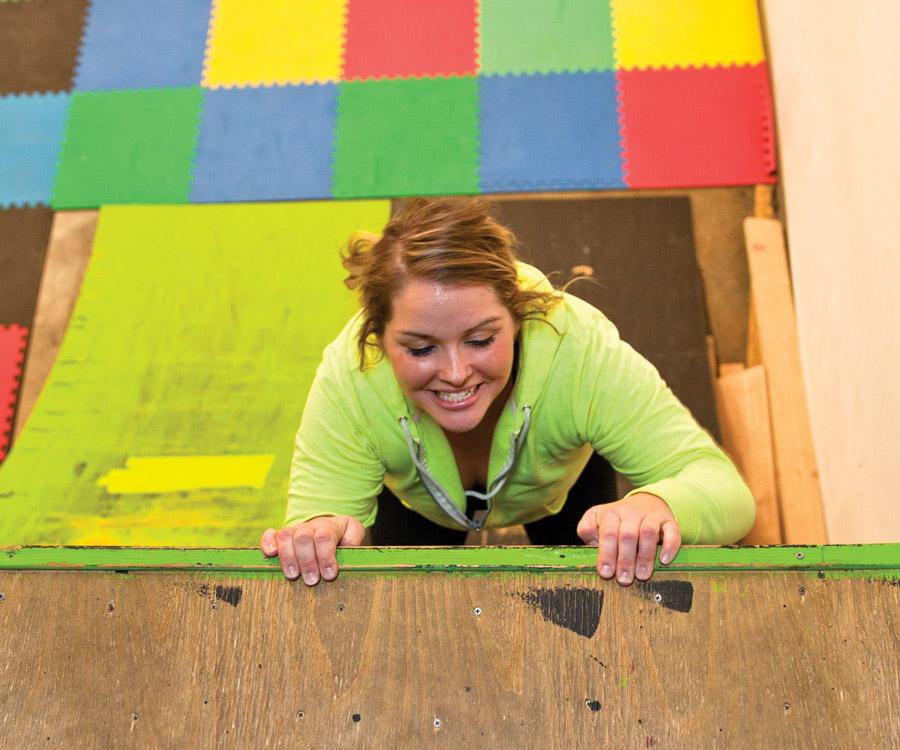 How to Try it: Warrior Sports offers Ninja Warrior classes, or you can come try out the obstacles. Check website for class times.

Have you seen that American Ninja Warrior show? You know, the one that follows fearless competitors who try to tackle an array of difficult obstacle courses? Well, 417-lander Andy Mariage has watched the show for years, and he was eager to compete. He was so eager, in fact, that he drove to Dallas, Texas, and walked on to the show’s try outs. Mariage made the cut (hooray!), but unfortunately, he fell out after the first round (boo!). After his few seconds of fame, he decided he wanted to train and do better, but there was one problem: There was nowhere to prepare for such obstacles in 417-land. But this didn’t stop him. “I decided I would build a gym with the obstacles,” Mariage says. “I talked to my parents, and they were immediately on board.” With the help of his father, Duane, Mariage built Warrior Sports, a Springfield gym that features more than 20 obstacles based off of those found on the television show. And since I’ve become the workout guinea pig of the Whitaker Publishing office for the purpose of this monthly column, I recently met Mariage for a walk-through of the facility, and I gave a few of the obstacles a try.

Warrior Sports is housed in a large metal building just off of
Plainview Road in south Springfield. After walking in, one of the first things you’ll notice is the warped wall, which contains both 10- and 14-foot curved walls that gym-goers are invited to try to run up and climb over. “The warped wall is one of the most well-known obstacles we have,” Mariage says. As you make your way through the space, you come across chains swaying from the ceiling, a large set of crooked monkey bars hanging overhead, a towering rock wall and much more. These items are just a few of the many hand-built challenges. The obstacles are all named things like the spider wall, the cliffhanger, the mine field, the devil steps and more. And yes, they look as intimidating as they sound. But while many of the obstacles are quite difficult, there are some that are approachable to ninja novices like myself. All it took was a little courage. 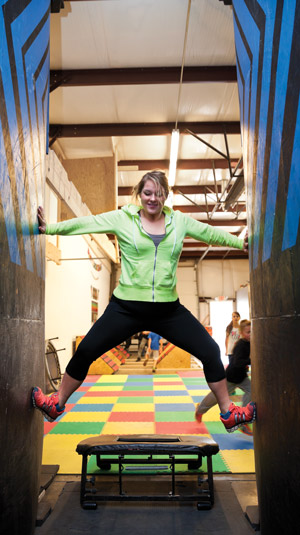 A couple of kids followed me into Warrior Sports, and they were running up the gym’s warped wall before their mom was even finished signing them in. Watching those two wasn’t good for me and my confidence level. My heart started pumping faster the second I saw the wall in person, and once I saw that little 50-pound boy take a wrong step and come rolling down the wall backwards, I didn’t want to try it. I was scared. Terrified, even. To put it in perspective for you, if I traveled back in time 20 years and running the warped wall was something we were going to do in fifth grade gym class, I would have bugged my mom until she wrote a note to get me out of it. I knew in my head that there was absolutely no way I could make it up that thing, and I didn’t even want to try. Luckily, there were plenty of other challenges to try first.

I followed Mariage around the rest of the gym and watched him demonstrate the other obstacles. The first challenge guests face at Warrior Sports is the quintuple steps, which is an obstacle containing five platforms angled at 45 degrees and positioned alternately left and right. Runners have to step across the steps in a fluid motion. You can tackle each platform in three steps, which is what I tried first. I was successful after a few tries, and I was feeling good. I decided to try them the more challenging way, landing with only one step on each platform, and I eventually made it! The quintuple steps require both speed and balance, so my confidence level went up a bit after I completed them successfully.

I also tried the spider wall, which is an obstacle where you run, leap onto a trampoline and then jump into a shaft of parallel walls and land with your feet and hands on the walls. Once you land the walls, the idea is to climb up them. It took me several tries to land the walls, but I did it. But climbing up them was a different story. I think I took a step or two once, but it always ended in me falling to the padded ground below.

I tried several more obstacles that +required balance and upper body strength, and I surprisingly did alright. My favorite challenge was the rock wall, mainly just because I did it without any real struggle or fear. I was actually having a great time trying everything, but then I remembered the towering curved wall that I had yet to try. I put it off as long as I could, then we headed toward the front.

This warped wall obstacle includes scaling a concave quarter-pipe wall by running up it and grabbing the top, then pulling yourself over it. Mariage made tackling it sound simple: He said to just run at it as I would run on flat ground. I tried to do that, but I knew in my head that flat ground is just that—flat! This wall was curved. I just knew that I was going to start running up and fall backwards. I was going to sprain my ankle. Actually, I thought I would probably break my legs and maybe never walk again. But whatever. I had to do it, so I pushed my fears aside and gave it a shot.

Getting a good running start, I went at the black side of the curved wall with all my might. Step after step, I made my way up it, and in what seemed like a split second, I was at the top! On my very first try, I made it up the warped wall, and I clung to the top with every bit of strength in my body. But that’s where it ended for me. I was exhausted, and I didn’t have enough energy left to pull myself over. But to me, it didn’t matter. I didn’t come rolling down backwards as I had pictured in my head, and I made it up. Not climbing over just gives me a reason to go back and try again. 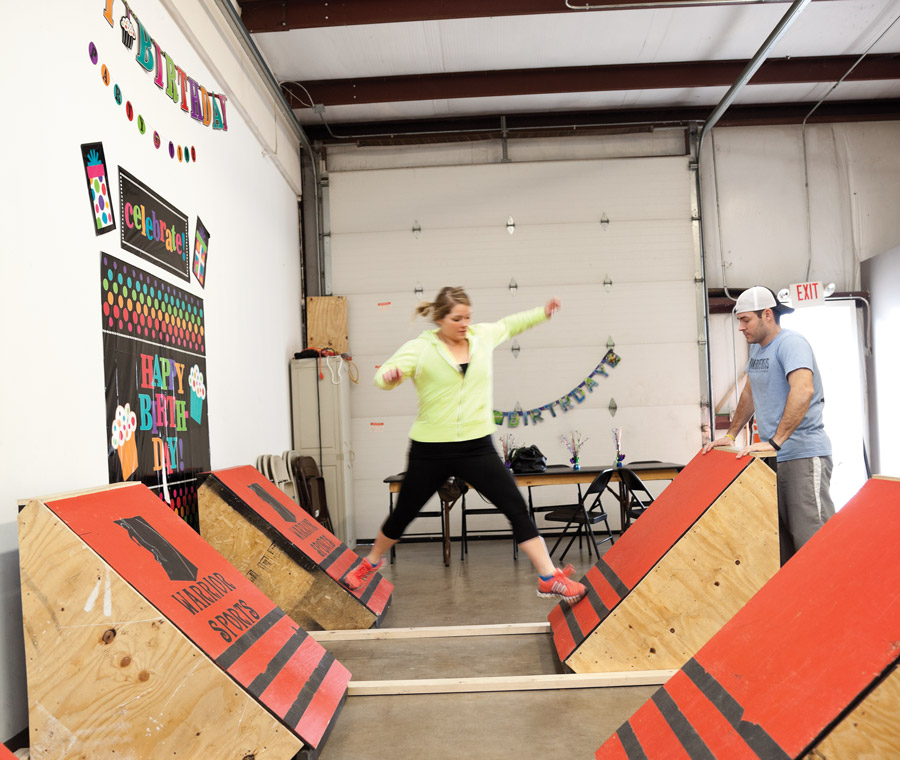 My core, arms and legs were all sore for days after trying the obstacles at Warrior Sports. But here’s the best part: I didn’t expect it because I wasn’t thinking about the workout. I was thinking about how much fun I was having. “I always tell people it’s an adult playground,” Mariage says. “It’s all the things you used to get in trouble for doing when you were home. Here, we actually encourage it.”