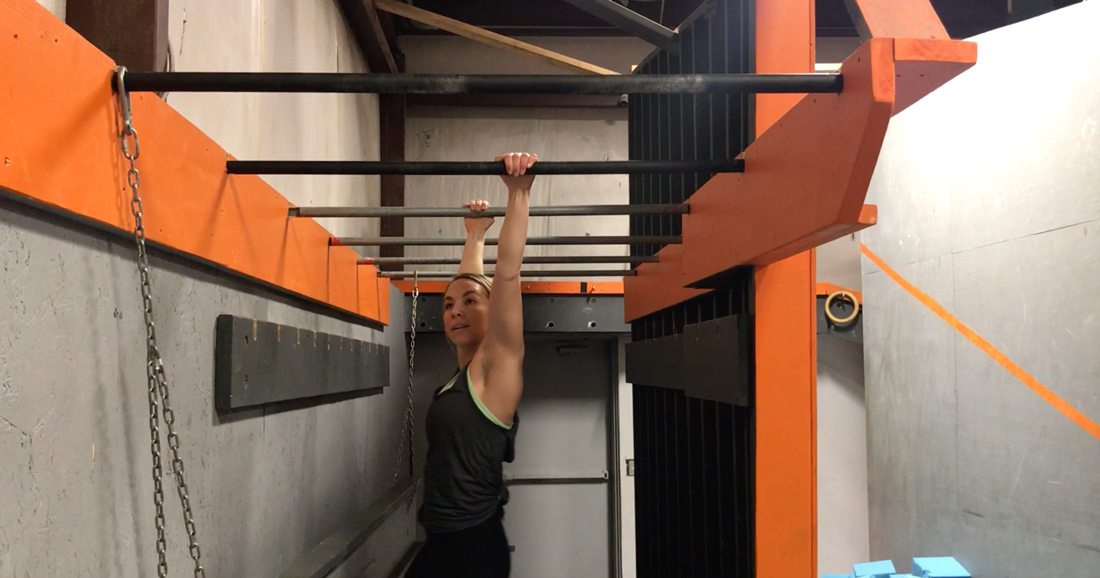 Photo by Brandon AlmsDayle easily made her way across the monkey bars before graduating to lacheying across the bars. Purchase Photo

When it comes to the world of American Ninja Warrior, everything is harder than it looks. It’s a humbling lesson I learned when I was sent to Republic Warrior Sports for 417’s most recent exercise experiment. If you’ve ever watched the popular NBC show where athletes attempt to conquer a series of crazy obstacles, you’ve probably found yourself thinking “Oh, that doesn’t look that hard,” and “I can do that.” More than likely, you’re wrong.

Before heading to open gym at the Republic facility, I chatted with my co-workers about the salmon ladder and other challenges I planned on conquering with ease. I was given the mission because I work out and do pull-ups regularly, so you can imagine the blow to my ego when I failed multiple obstacles and painfully parted ways with a callus.

THE FACILITY
When I arrived at the facility, kids were swinging from the ceiling and crawling out of the woodwork—literally. With more than 40 obstacles, the space is a playground on steroids. Jon Taylor, a certified personal trainer and competitor on season eight of American Ninja Warrior, opened the gym in November 2016. Now, he’s built up a team of trainers who have also been on the show, including Sean “The Golf Ninja” Saunders, Kim James and Madelynn McNeal.

Republic Warrior Sports’ most popular classes are for preschoolers and kids ages 6 to 12, where energetic youngsters work on balance, strength and mobility to improve speed, agility, power and conditioning. The space also hosts 30-plus birthday parties each month. Had I registered for a class, I would have attended Ninja 101, which is a structured open gym for ages 13 and older. Since I’m not fully committed to becoming a ninja, I went the drop-in route, which allowed me to pick and choose my challenges with help from Taylor.

THE OBSTACLES
While warming up with resistance bands, Taylor informed me that he and his pals built the majority of the obstacles in the gym. Instead of creating exact replicas, many are designed to be a little more difficult than what you’d find on the show. We decided our first obstacle would be one of the most iconic: the warped wall. Popular in obstacle course racing and ninja competitions, the gym’s three-tiered wall maxes out at 15.5 feet. Without much notice, Taylor bolted up the tallest wall and easily made his way to the top. He confidently slid down the wall and, before I knew it, it was my turn.

Instead of going in full-throttle, Taylor suggested I start with the 12-foot wall. I knew it was doable, but throwing your body into a wall is a bit frightening—especially when you only have about 10 feet to gain speed. It took me a few tries to fully commit, but I eventually made my way up the wall by deliberately planning out my steps and getting comfortable with my escape route (sliding down on my butt). In the end, it was actually pretty easy, and I was excited to have tackled the first obstacle thrown my way.

When I attempted the devil steps, pegboard and salmon ladder, my confidence was quickly deflated. Pulling myself up on each obstacle was easy, but things got difficult when a great deal of grip strength and unfamiliar movements were required. This was especially true with the pegboard, where I tried to move pegs around while relying on one arm to support my body weight. My pull-up routine had betrayed me, but I cut my losses and set my sights on the spider jump. I was transported back to my gymnastics days as I ran and bounced off a mini trampoline, extending my limbs to land between two vertical walls. Once I nailed the jump, I moved my hands and feet along the wall to get through the obstacle. Even though it was fairly simple, I definitely experienced an adrenaline rush.

Taylor presented me with several other obstacles throughout the evening, but my grand finale was on the monkey bars. Because of cross-training classes I’m really comfortable on them, so we quickly moved on to lacheying, which is similar to a release move on the uneven bars. Taylor made it look incredibly easy with powerful swings and graceful transfers from bar to bar. Since I’ve been out of the gymnastics world for a solid 20 years, gaining enough momentum to fly through the air was a struggle. On my final attempt, my hands brushed the bar, but failed to latch on. This is where my callus ripped off, and my stint as a ninja concluded.

THE EFFECTS
Being a ninja for a night was the most fun workout I’d had in a while. Risk-taking was encouraged, my adrenaline was pumping, and I got to attempt physical feats that most people only see on TV.
Similar to rock climbing, my forearms were sore from all of the upper body exertion, and my flapping hand skin had a heartbeat of its own. My upper back and shoulder blades were more stoved up than normal, and my delts were feeling the effects, too.

Even though I really disliked failing obstacles, I came to realize that it’s the challenge that keeps determined ninjas coming back for more. Although these contestants might look like our next-door neighbors, they’re incredibly powerful athletes, and it takes a lot of work to get on their level. For the time being, I’ll stick to my pull-ups… once my hands heal.

Who it’s for: Anyone, but it’s probably more fun for people with existing upper body strength. 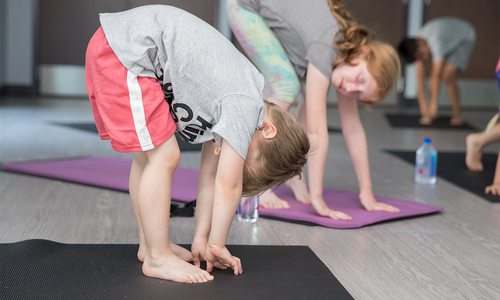 With a 5-year-old yogi in tow, we checked out the kids yoga class at Springfield’s S.W.E.T. Hot Yoga and Fitness studio.