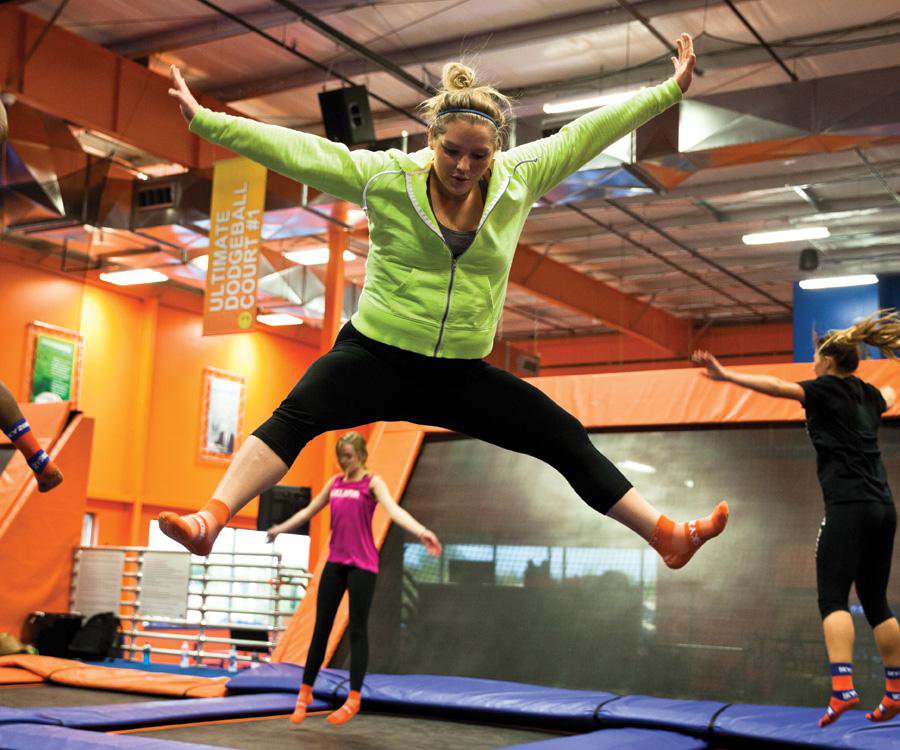 Since all of the moves are performed on trampolines, you will literally bounce off the walls at this class. Fun!

Sky Zone always has music playing in the background, and you can bust a move between reps.

During my childhood, there was a three-year span when a “big trampoline” was the No. 1 thing on my Christmas list. But thanks to a Santa Claus who seemed to worry a bit too much about me breaking a bone, I never got one. Luckily, I had several friends who did, and we spent many days jumping until our legs felt like noodles. We jumped our hearts out. We jumped until we could jump no more.

In 2014, someone at the 417 Magazine office announced they heard Springfield was getting a Sky Zone, an indoor trampoline park. After one quick thought of “Oh my goodness, why did this not happen 20 years ago?,” I immediately got excited—trampolines are great exercise, and I write about great ways to exercise in 417-land every month! Thanks to this Get Fit column, I had the perfect excuse to go and jump my heart out, just like I did when I was a kid. After Sky Zone opened, we called to learn the best way to get in some exercise there. The spot was planning to offer workout classes, so we waited until they started, and then pulled on some special grippy socks and got to jumping.

Although you can get in a fabulous workout while you’re there, Sky Zone isn’t a gym. In fact, it’s not even close. Instead, it’s an indoor trampoline park created for both adults and kids. It’s packed with trampolines, which are connected to one another to provide massive jumping areas. There’s a section toward the front of the building where the classes happen, and there is also a spot for dodgeball, a foam pit where you can take a plunge and even a couple of basketball goals where you can practice your dunk. And, of course, there’s plenty of room for open jumping, too. 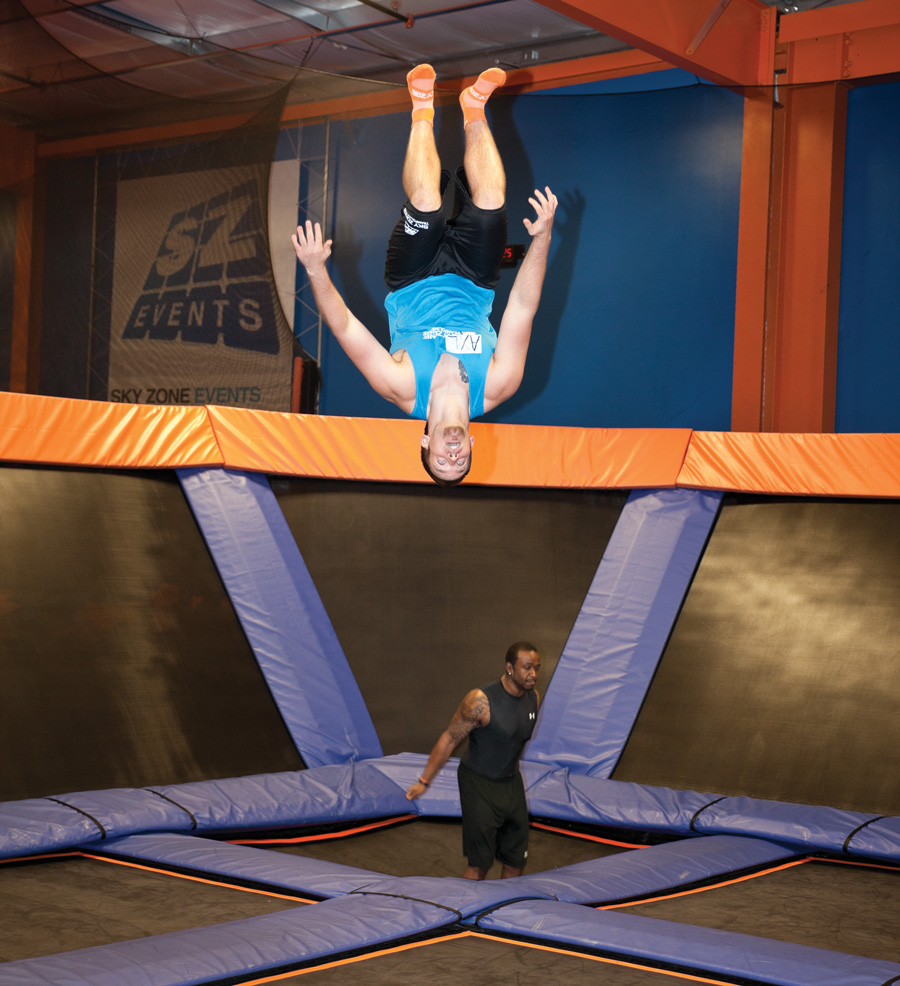 An afternoon at Sky Zone offers all kinds of jumping opportunities.

I arrived at the SkyFit class about 10 minutes early. After I put on my special Sky Zone socks (all jumpers need to purchase these $2 socks, which provide extra grip), class instructor Axl Larson invited me to jump around on the trampolines to warm up. “If you aren’t used to the trampolines, they will feel pretty new to you,” Larson says. And he’s right. I hadn’t jumped on a trampoline for years, and it felt a bit crazy (but the good, fun kind of crazy).

Soon, Larson had us line up on one side of the trampoline area. The entire trampoline section is separated into smaller squares, almost like a giant patchwork trampoline quilt. We each got on our own square, and we started stretching.

Once our muscles were good and warm, we began the class. We started out with some fun exercises consisting of 45-second bursts of different jumps, and these were mixed in throughout the entire class. We performed one move where we would jump, sit down with our legs stretched in front of us then jump back up. We also did another where we brought our knees to our chest while in the air, and even some where we pretended to jump rope while we were soaring far above the trampoline. At one point, we even did jumping jacks as we boosted our bodies toward the ceiling. “Plain jumping works your core muscles a lot,” Larson says. It definitely felt like it was working.

As time went on, we tried some more traditional exercises on the trampolines, including pushups, situps, lunges and even suicides. The suicides, which were basically moving side lunges that eventually stretched the entire length of the sea of trampolines, were particularly exhausting, but they were doable because Larson let us go at our own pace.

While many of the exercises were all typical moves you’re likely to try in a number of workout classes, performing them on a trampoline provided a whole new challenge, especially for the lunges. I had a hard time not losing my balance at first, but it got easier as I went on. And everything I did was seriously so fun! Even though I was beyond exhausted during our built-in breaks, I found myself jumping anyway, because I didn’t want to miss a second of the action. Our staff photographer, Brandon Alms, even jumped while we took breaks.

Toward the end of the class, Larson invited us to free jump. He even showed us how we could jump off the walls. While my lack of balance prevented any real impressive moves from happening, I still enjoyed myself while trying. I was actually a little bummed when the 45-minute class came to an end. I could have jumped all day.

By combining calisthenics, core exercises and strength building aerobics, the SkyFit classes provide an amazing workout. In fact, Larson says you can burn as many as 800 calories in the 45-minute session. But the best part is, you’ll enjoy every second. It was just like when I was a kid. I jumped until my legs felt like noodles. I jumped my heart out. I jumped until I could jump no more, and I can’t wait to do it again. 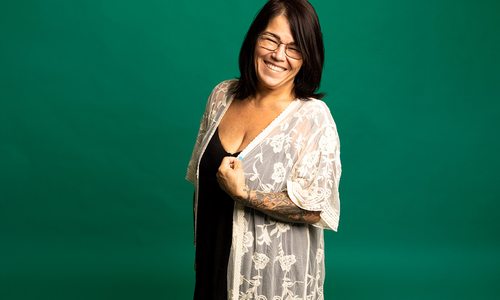