At the beginning of 2016, Springfield was gearing up to launch a new plan that would improve the city’s water quality and reduce flooding from stormwater runoff. One year later, we check back in to see how things are going. 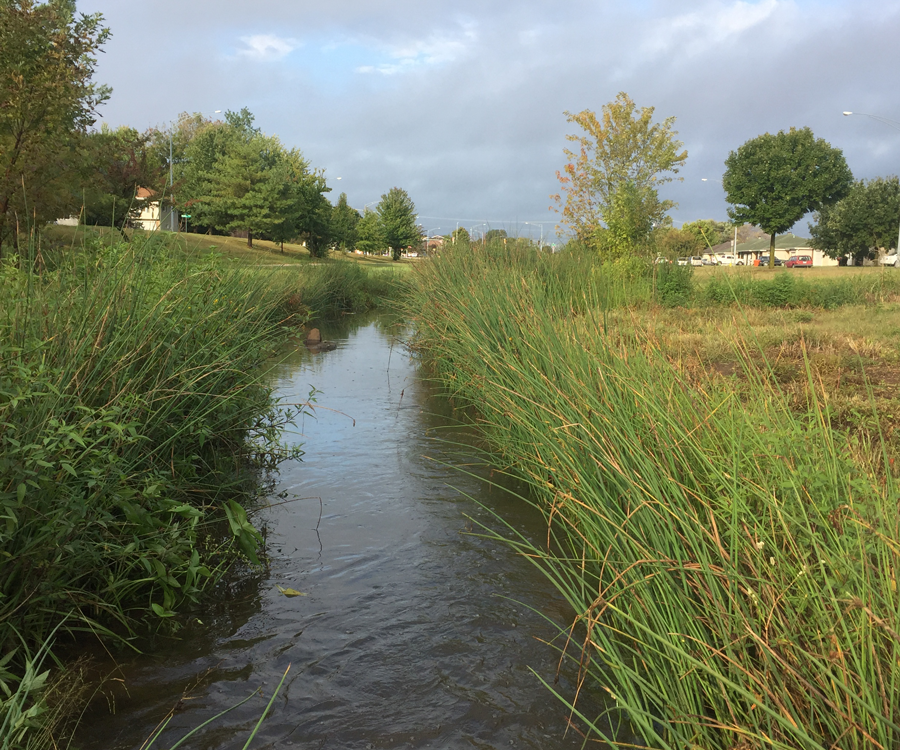 Help Plant Trees, and Assist in River Cleanup Sessions: You can join Frey and the James River Basin Partnership at one of its regular river cleanup efforts. Just visit jamesriverbasin.com and click on Take Part to learn more.

Get a Rain Barrel: A 1,000-square-foot roof can produce 600 gallons of stormwater runoff with just 1 inch of rain, and City Utilities offers a rebate program for those who purchase rain barrels.

Plant a Rain Garden at your Home or Business: Rain gardens help slow, spread and soak in stormwater runoff, but it’s important to use native plants. Companies like Sustainable By Nature can help you design and install a rain garden.

Rethink Fertilizing: Use a soil test to see how much fertilizer you actually need.

Organize a Trash Pick-Up: Cigarette butts are one of the top water contaminants. Even sweeping up trash around your neighborhood can keep debris like cigarette butts out of waterways.

Back in January 2016, city officials in Springfield were buzzing with talk of water. After decades of struggling to meet EPA regulations to improve water quality, the city had proposed the Integrated Plan. It was the first of its kind in the country and argued that to clean up Springfield’s waterways and reduce flooding from stormwater runoff, city agencies needed to work together on budget-friendly solutions that addressed both issues simultaneously. If the Integrated Plan failed, the city risked having the EPA step in to take over improvements. It was a huge undertaking for the city as stormwater pipes were aging into disuse and creek beds turned into concrete tunnels years ago. Even a light rain often resulted in flooding, but the city was emboldened by its new plan, and once the EPA gave it the green light, the city went to work addressing one of its key assets: water.

Low-cost projects like rain gardens were installed to help soak in stormwater, which would relieve an already overburdened sewer system. Strips of pervious pavement were added to parking lots to help slow down, spread out and soak in stormwater, and the city celebrated another big success as the concrete along South Creek became natural vegetation to help restore the creek to its native setting.

“This 1-mile section of stream was converted to a concrete channel years ago,” says Carrie Lamb, water quality coordinator for Springfield. “It stood out as something that would provide major water quality improvement and also provide community benefit because there is a Greenways trail there, and a lot of people use that.” More than 40 pipeways dump stormwater runoff into South Creek, and the concrete bed stopped water from saturating the ground.

Over six months, the concrete banks were hauled away as rocks, boulders and logs were brought in to provide habitats for wildlife. Native plants including milkweed and bald cypress and swamp white oak trees were planted. Once the project was complete, more than 100 new trees had been planted, and small fish were repopulating the stream. The project was funded, in part, by a $765,000 grant from the Missouri Department of Natural Resources.

We are gaining miles of floatable streams back in our area, and that’s a big success.”—Mike Kromrey, Watershed Committee of the Ozarks executive director

The James River Basin Partnership did a pre- and post-construction macroinvertebrate monitoring of South Creek and was pleased to see a more diverse population in the water. “These are small aquatic bugs that serve as a food source for fish,” says Tiffany Frey, executive director of the James River Basin Partnership. “Some are pollution sensitive and others are pollution tolerant. You want to see diversity in types that live in streams.”

The city’s efforts to clean up its waterways and reduce stormwater runoff can be seen in dozens of streams and creeks. Sometimes you have to know what you’re looking for, like the invertebrates Frey catches, while other times the improvement is more obvious. “[Water in] Wilson’s Creek used to be black,” says Mike Kromrey, executive director of the Watershed Committee of the Ozarks. “I recently floated stretches of local streams that were once considered toxic or too polluted like the Little Sac River and upper stretches below the Northwest Treatment plant. We are gaining miles of floatable streams back in our area, and that’s a big success.” But Kromrey admits these small victories are not enough. “I’m grateful for improvements to South Creek,” he says. “But we still have work to do. It’s an always grateful but never satisfied statement.”

Now, the city of Springfield is celebrating its victory at South Creek and busy planning upcoming projects. But just like 2016, one hurdle remains: funding.

“We still stand here without a dedicated funding source for flood control and infrastructure,” says Errin Kemper, assistant director for the Department of Environmental Services. That’s a problem when the city’s stormwater task force estimated the cost at $11.3 million a year—$2.8 million for yearly operations and permit compliance costs, $2.5 million a year for infrastructure replacement and $6 million a year for high-priority flood control projects. Despite having no allocated funds, progress is being made. The city is working with private property owners to disconnect downspouts connected to city sewer lines. “We will disconnect that at the city’s cost,” Kemper says. “Every dollar we spend on something like that saves $11 or more on having to replace those pipes.” From 2012 to 2015, the Watershed Committee of the Ozarks and six community partners brought in $1.7 million to complete projects geared toward reducing stormwater runoff. Springfield installed 9,250 native plants, hosted seven river cleanups and added 28,000 gallons of rainwater harvesting capacity, which Kromrey says will save millions of gallons over time. Now that the grant has ended, the city is focusing on the public.

“One of our biggest initiatives in 2017 is education,” Kemper says, describing how the city has joined forces with several organizations to increase awareness and teach the community how it can help the city implement its Integrated Plan. Kromrey and his team frequently give presentations to businesses and civic groups and host students at the Watershed Center where they get hands-on experience studying stream organisms and learning about low-impact developments.

With even more EPA guidelines set to take effect this year and the battle for funding nowhere near over, the city’s Integrated Plan still has a long way to go. In 2017, the city’s biggest proponents will likely be its own residents. “The big battle is in all of our backyards,” Kromrey says.