Through Askinosie Chocolate and its mission for a farmer- and community-focused business, local high school students are stepping into another world and bringing education, food and friendship to a school in Tanzania.

Written and Photographed by Bob Linder 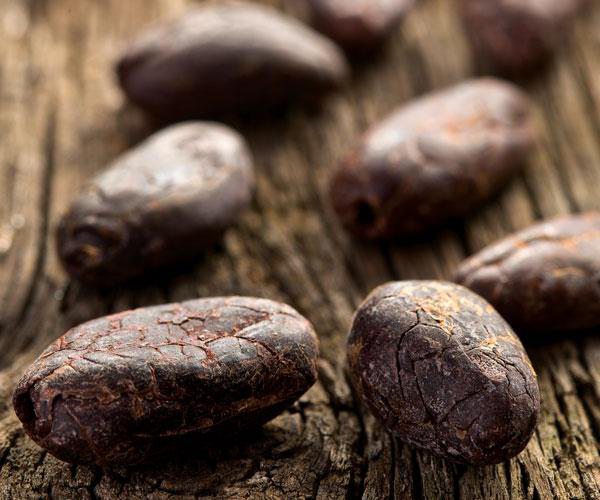 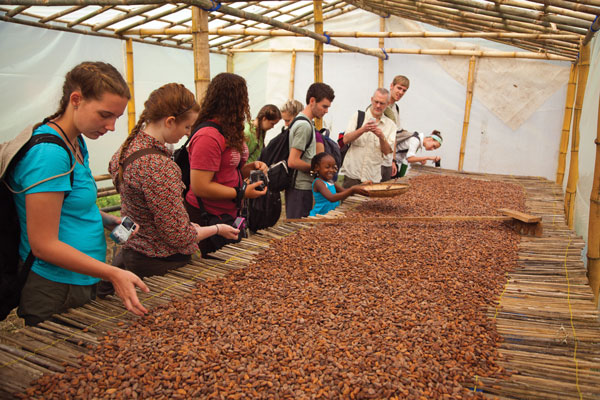 They laughed and smiled, leaned across desks and stood on chairs to get a look. A dozen or so students from Mwaya Secondary School near the village of Tenende in southwestern Tanzania listened as Kelsey Esther, a high school junior from Springfield, guided them through video lessons on a laptop.

It was a week of firsts. For many of the Mwaya (pronounced Ma-WHY-uh) students, it was their first exposure to a computer. For Esther it was her first time to fly. And what a journey it was: Four commercial jetliner flights from Missouri to London and on to Nairobi, Kenya, and Dar es Salam, Tanzania; then a jarring ride in a small bus to Tenende. It was a 38-hour ordeal in all.

Esther was one of 12 high school students, three university students, two teachers, one computer specialist, one eye surgeon and one chocolate maker to make the trip. They call themselves Chocolate University—and as odd as it sounds, it did all start with chocolate.

Two weeks earlier both the high school and college students were getting a crash course in cacao agronomy, social entrepreneurship, Tanzanian culture and the Swahili language. Cocoa beans are at the heart of it, and the students learned what the beans look like, how they smell and even how they taste. They would need to know how to grade the beans and what to look for, because they were going to be doing just that on location in Africa.

Askinosie Chocolate is a family-owned, small-batch chocolate maker in Springfield, sourcing 100 percent of its cocoa beans directly from the farmers, which allows the product to be accurately defined as “single-origin chocolate.” The company’s owner and founder, Shawn Askinosie, then profit-shares with those farmers. It is part of the mission of Askinosie’s business to connect these communities and schools to the community and schools in his company’s hometown.

It began in 2007. Askinosie wanted the business to be a teaching tool for Boyd Elementary School. The program was dubbed Chocolate University (CU) and is funded by tours of the Askinosie Chocolate factory.

Two years later, Askinosie connected Pipkin Middle School students with students in Malagos Elementary in Davao, Philippines, one source for Askinosie’s cacao. Malagos is the site of the first CU sustainable lunch program, funded by the sale of a chocolate drink made from roasted cocoa bean powder. Sales have provided 185,000 lunches to the kids at Malagos.

In 2010, 13 students were selected from Central High School to embark on a “bean to bar” experience culminating in the group going to see where the cocoa comes from. Meeting twice a month, they learned how to grade beans and make nano-batches of chocolate. They even helped select a new country of origin, eventually choosing Tanzania. Part of the formula in selecting a new cocoa source for Askinosie Chocolate was to find a woman-led farmer group. Askinosie found the UWATE farm collective in the village of Tenende, Tanzania, led by Mama Kyeja. The village had no clean water, so the students raised money to have a well drilled.

The 2012 class of CU had an even more ambitious assignment: To bring laptops brimming with lessons, along with LCD projectors, to a school with no electricity, then set up a production line of Mwaya and CU students to bag 1,000 one-kilo bags of locally grown rice to be sold in the United States to fund a school lunch program using a nutrition baseline data team to measure height, weight and arm circumference of students to see if the lunch program has the desired effect. Another donation allowed the hiring of the school’s first computer teacher. 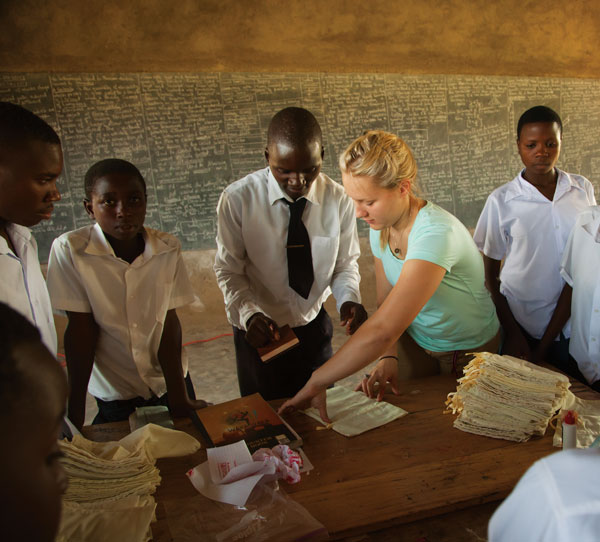 In the bag: Chocolate University student Jessieca Vorbeck helps students at the Mwaya school bag rice to sell as a fundraiser for school lunches.

On a Monday morning in July during the recent trip to Tanzania, the small bus makes its way down the dusty road to the school. On both sides of the road are endless rice fields. Women with their young children work the rice. The bus pulls up at Mwaya Secondary School, which features two rows of windowless classrooms with a large center courtyard. This school accommodates 1,100 students and 10 teachers. Students in gleaming white tops and dark trousers or skirts face the bus as the American entourage unloads. Smiles and handshakes turn into hugs and laughs.

There are a few speeches by the school’s headmaster and Askinosie explaining the week’s activities. The CU team splits into three groups. One group sets up the generator and runs power cords for a computer system. Another sets up a rice-measuring and bag-labeling operation, and the third begins weighing and measuring students and recording data.

In the village of Tenende, Mama Kyeja brings farmers of the UWATE collective to meet Askinosie. Outside in a building similar to a greenhouse, tables of cocoa beans are drying. Later students will inspect and grade the beans as they had learned to do back in Springfield, but for now all listen intently as Askinosie speaks through his translator, Kellen Msseemmaa.

Askinosie has profit-sharing cash for the farmers but also some bad news. While the beans he received from them were very good, some had molded in transit. One fourth had to be discarded. Askinosie says the beauty of direct trade is in building relationships. Improving post-harvest processing raises the quality and value of the product. 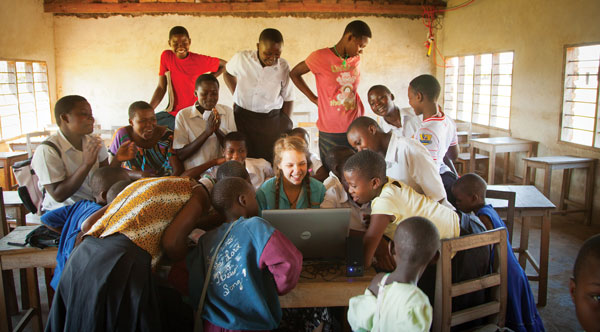 First of its kind: Kelsey Esther demonstrates how to use the new laptop. This is one of six laptops brought to a school in the Kyela District.

Computers in the Classroom

Charles Taylor tucks a long extension cord into the rafters outside the brick classroom at Mwaya while standing in the glassless window frame. Eric Ham pulls on the cord to give Taylor more slack to reach inside the building. Taylor is the dean and vice president of academic affairs for Drury University. Ham is an information technology manager for a Springfield financial institution. Inside, Spenser Pulleyking, one of the high school students, and Tiara Hughes, an architecture and business major at Drury, hang a screen for the LCD projector. Together they are firing up six laptops with LCD projectors. These will be the first computers to be installed in a school in all of Kyela District.

The laptops have some 3,000 video lessons loaded on them thanks to the Khan Academy, the non-profit organization that provides world-class educational resources free of charge. “The laptops and the Khan Academy materials will revolutionize what I think the teachers are able to do,” says Taylor. “Teachers here are working with 80, even 100 students at a time.”

One onlooker is Kyela District Mayor Gabriel Kipija. “This project at Mwaya Secondary School is like a savior for the children, for the teachers and other employees working for this school,” says Kipija. “We say that in the 21st Century a person who does not know how to use a computer is like a person who does not read and write because a computer is a writing tool used in offices everywhere. So our students can use these computers to help them to go to college.”

A Thousand Kilos of Rice

Along with the rest of its undertakings, the CU group developed a self-sustaining school lunch program to address malnutrition. Most of the 1,100 students here eat one meal a day, and because the Kyela rice is of unusually high quality, it seemed a natural product to sell as a fundraiser in the United States.

Forming an assembly line, students and teachers  bagged and stamped 1,000 one-kilogram bags of rice. Fabric and sealable plastic bags were sourced in Tanzania. Mwaya students and CU students worked together at every point. “There are a few people who know me by name now,” says Jessieca Vorbeck, one of the visiting high school juniors. “They have come to find me and shown me their homes, shown me what their life is like. They come and greet me each day. That experience was amazing. Even though we are different ages, and we come from a different area, we’ve become great friends.”

AT THE MARKET Late afternoon sun pours into the market district in Kyela, Tanzania.

Each evening, the CU team debriefs the day’s activities. Daudi Msseemmaa, a Tanzanian national and American citizen who is now the East African Regional Director for Convoy of Hope, led the group and asked questions, such as: What did you smell today? He explored their senses and pulled out responses that led to unexpected discussions. It was a chance to share how Americans view Tanzania and how Tanzanians view the Americans.

“The person you are when you are given everything you want and every luxury is in front of you is a different person when you are here watching people struggle but still be so happy,” says high school student Bailey Simpson. “I watched my heart open to people I really didn’t know and had never seen but [who] instantly embraced me. And I learned to embrace them and love them for the people that they are.”

Askinosie is not surprised to hear the American students speak of changes wrought by the trip. “I say to students who are on the fence about what they want to do with their lives, or how they want to make their lives richer before they go to college, that maybe they don’t want to live in Africa for the rest of their lives but maybe they do want to find a way to serve people,” he says. “There is something about this trip that lights that spark that gives people inspiration and imagination about what they can do and how to give their lives meaning in the future.”

A Gift and a Goodbye

On the evening of the last day, the CU team relaxed after their last dinner together in Tanzania.  They have been brought together by the events and challenges of the last week. Collectively they are ready to travel to more familiar surroundings, yet reticent to leave.

Before leaving the United States for Tanzania, Askinosie distributed T-shirts to the group. On the front of the shirt in large letters is printed the words: “KUJENGANA: verb Swahili—to build each other up.” The shirts helped keep track of students in busy airports and fostered a sense of teamwork. However, at this point in the trip, the shirts’ slogan had a more poignant meaning. The visitors from America knew they would be “building up” the students of Mwaya Secondary School and the village of Tenende, but they hadn’t expected how much Tanzania would do for them.

“It’s almost magical to watch them transform over the time they’re here and how much of an impact this has on their lives,” says Askinosie. “When I first saw this, I almost didn’t believe it. Because I don’t really understand how it works. It’s just that they are exposed to this culture and these people and their hospitality and their friendship and their love, and it just does something to people—all of us.”

What: Chocolate University trip to Tanzania

Details: High school juniors and seniors are invited to apply for Chocolate University by the Oct. 11 deadline. Letters of acceptance are sent on Nov. 8. Chosen students go through an orientation in December and spend a week on the Drury University campus prior to their trip. 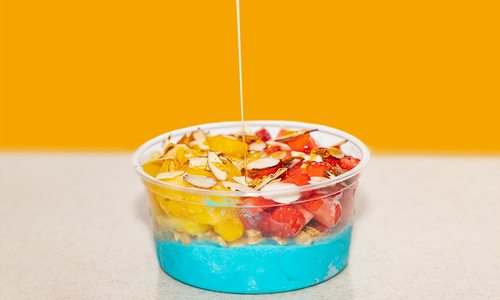 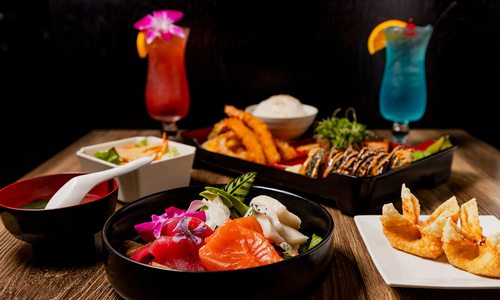 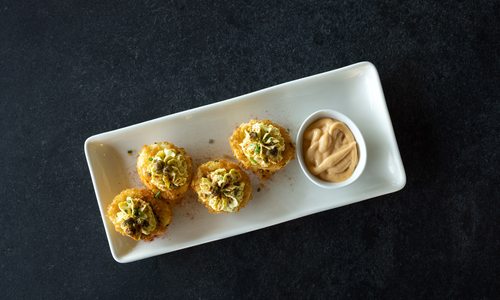