417 Magazine’s Office Manager Carley Inskeep trekked across the country to Albuquerque, New Mexico, to see the sky fill with hot air balloons at the annual Balloon Fiesta. Read her tips for beating the crowds and enjoying the festival for yourself. 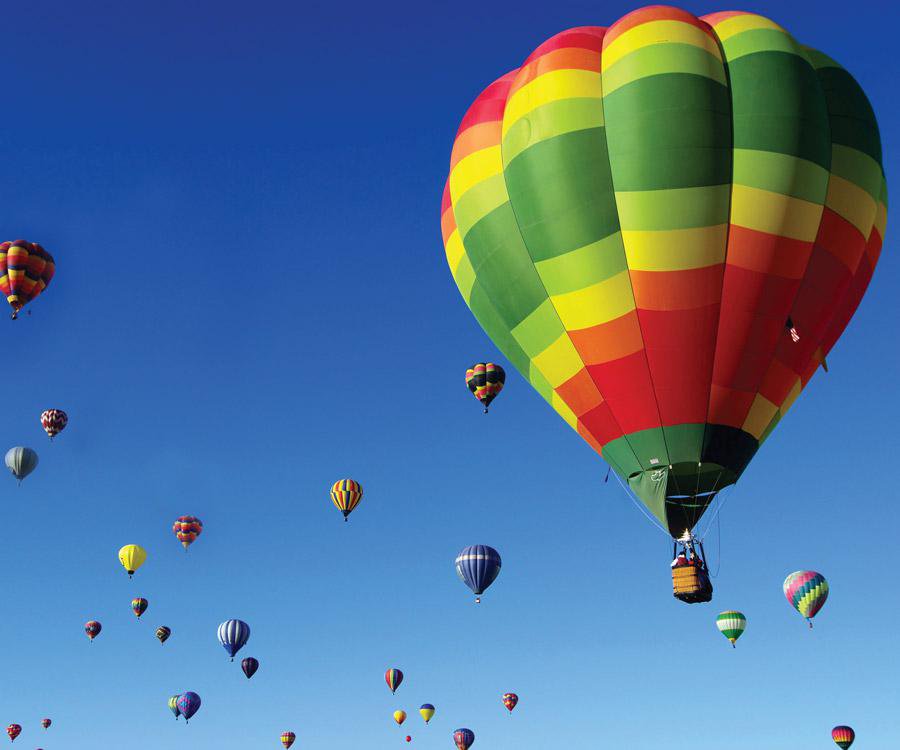 Adventures typically start with a wild idea, and this one was no different. Last October my friend Jennifer Linders-Glover wrangled me into a trip to see something that I could never have imagined being so much fun and so incredibly interesting: a hot air balloon festival. As a photographer, Jennifer had her reasons for wanting to experience all the colors and patterns against the Albuquerque sky. I was just in it for the road trip. My mind quickly changed course once I set foot in the Balloon Fiesta Park. 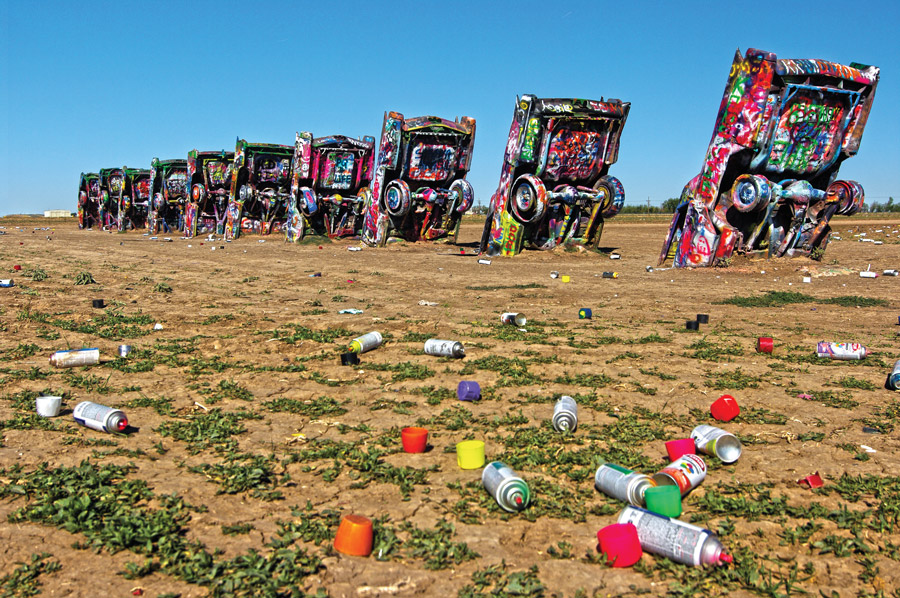 After spending the first day of our trip on the road and then spending the night in Amarillo, we hit the road again. We stopped at the famous Cadillac Ranch and spray painted a few cars with our names and the names of the ones we love. You can’t miss this place; it’s located right off I-40 West from Amarillo. We learned that this tourist attraction has become a trend setter for others in the area; the VW Slug Bug Ranch and the Combine City also feature half-buried vehicles, and you can stop and see them, too.

After that quick stop, we jumped back on the highway to Albuquerque. We arrived nice and early and checked into our hotel. Because of the Balloon Fiesta, you really need to book your hotel months in advance to get one close to the park. Next, we decided to run up to Santa Fe for dinner and shopping. The drive is a little less than an hour, which made it the perfect distraction for the evening before the festival started.

We visited Santa Fe’s Old Town Square, which is filled to the brim with street merchants and shops along the way. Artists and vendors fill every crevice of the courtyards off the square and lay out their wares on blankets. If you are looking for a trinket to remember your trip, you will not be disappointed by the diverse choices available.

Before heading back, we grabbed a bite at the Blue Corn Café (133 W. Water St., Santa Fe, New Mexico, 505-984-1800, bluecorncafe.com) right off the square. We definitely could get used to the fresh, delicious cuisine in New Mexico. This particular restaurant went heavy on the spice, but it was no problem—we had the best margaritas of our trip to cool our palates.

We decided to drop by the Balloon Fiesta on the way back to the hotel to get a grip on the layout for the morning. The overwhelming size of this event took us by complete surprise. You will not be bored here. There are vendors offering assorted food options, souvenirs, jewelry and activities. There are even art galleries set up on site for you to peruse. 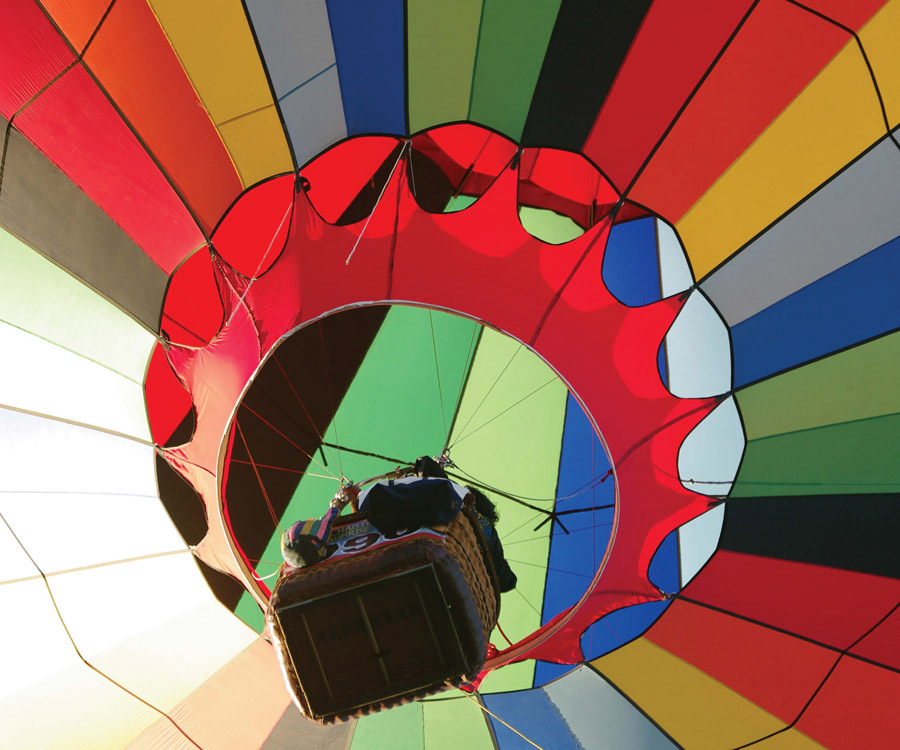 Up Before the Sun

In order to be a real Balloon Fiesta attendee, you must be up and at ’em at around 3:30 a.m. Luckily, we had some good tips to beat the traffic and to get a good parking spot. What we had not planned on was the weather. Our jeans, hoodies and tennis shoes were not enough to block out the freezing morning temperatures. I highly suggest you wear lots of layers. Gloves are a necessity, along with a coat, hoodie and T-shirt—maybe even some long johns!

Traffic can pose a problem if you do not plan ahead. If you reach the gates any later than 4:30 a.m., you will be waiting in a line for anywhere from 15 minutes to an hour to park. You definitely want to be parked and inside by 5 a.m. so you do not miss anything. Once inside, you can grab some breakfast and look around the booths until the event starts.

One of the first shows you want to see is Dawn Patrol. It’s fascinating. It will even make you forget you were up so early. On our first day, Dawn Patrol consisted of about seven or eight balloons. These pioneers of the sky fill up and light up the morning in a beautiful show. You are able to walk among the balloons and even chat with the pilots and crew. Dawn Patrol is crucial to the day for all the other balloonists. They test the wind speed and direction at different altitudes. They stay up in the air until the sun is bright enough for their chase crews to hunt them down.

In the Thick of It

After the sun came up and the cold started to wear off, the crowds starting pouring in. The 78-acre launch field became a canvas for hundreds of colorful hot air balloons and the people so anxious to see them rise into the sky. We made some friends out of a couple of pilots from Colorado who were there purely for recreation. They informed us that some of the other balloons were there as promotional tools for companies or to compete in a flying event. More than 600 balloons were expected to show up that weekend. Only a couple hundred were actually there our first day.

Once the chase crews—the people who drive after the hot air balloon to pick up the riders and pilots—had cleared the field after Dawn Patrol, the rest started setting up. Mass Ascension happened between 7 and 7:30 a.m. our first day. They only hold these on the weekends and Wednesday morning. The rest of the balloons that were there filled up right next to each other, and you, on the field. This makes for a beautiful sight and some very interesting photos. You get to really experience the routine, from rolling the balloons out on the ground to filling them up and attaching the baskets. Then all of them start taking off. Some at the very same time. The sky starts filling up with different colors, shapes and sizes of balloons.

By the time the chasers left this time, the other activities started off the launch field. For us, this meant heading back to the hotel for a quick nap. You could stay all day at the park watching the other activities (like the chainsaw carving competition) or participating in the other goings-on. We chose to take a break, then head back at 4 p.m. for the evening.

The Twilight Twinkle Glow was held around 5:45 p.m. This event starts right before dark and the balloons literally light up the sky like a bunch of jack o’ lanterns without ever leaving the ground. Although it was very hard to shoot photos of the glow, it was a beautiful sight for all guests to enjoy, especially the call for “all burn,” where all balloons participating lit up at the same time.

After the glow, some balloons participated in the America’s Challenge Gas Balloon Race Launch. This race goes on for two or three days and up to 2,000 miles. These balloons use fuel to stay in the air for longer periods of time than hot air balloons. They choose the winner by who flew the farthest by the rules set. There were lots of cheers wishing the balloonists well on their journeys to who knows where!

A wonderful fireworks show ended the evening. Then we were off to dinner at Sadie’s of New Mexico (5400 Academy Rd. NE, Albuquerque, New Mexico, 505-821-3388, sadiesofnewmexico.com), a local restaurant right next to our hotel. The service here was only surpassed by the food. Nothing was left out. We told the waitress to bring us her favorite dishes, and we were not disappointed. The chili con queso was the best dip I have ever had. We even snuck the recipe out on the back of our receipt. That waitress was amazing. The entire meal was topped off with sopapillas and warm honey. I would fly back there just for another taste! 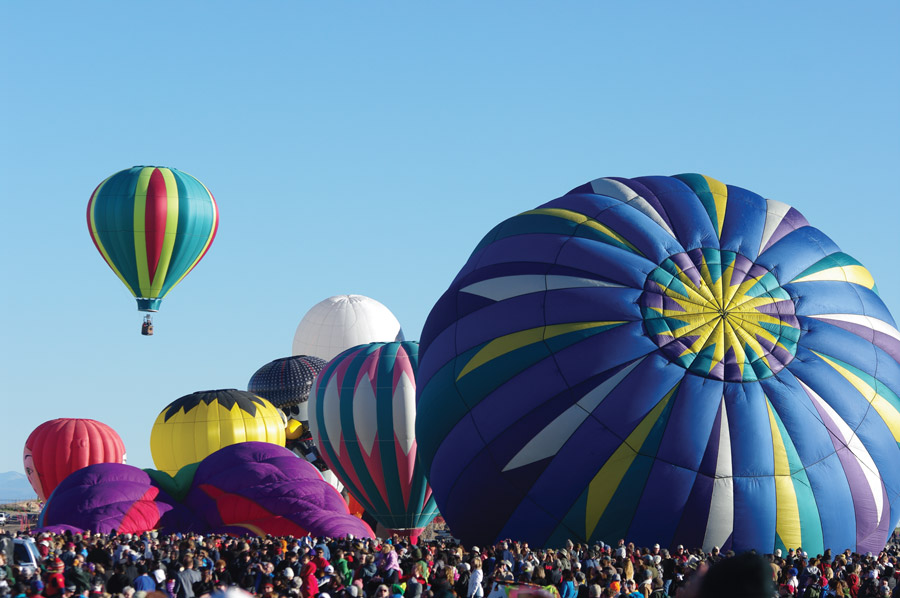 On our final morning of the Balloon Fiesta, we got up and out the door just as early as the day before, but we did stay in the car in the parking lot for a while before venturing out into the brisk morning.

We took our time grabbing a bite to eat and moseying onto the field. There were 13 balloons getting ready for Dawn Patrol. My favorite was the Wicked balloon. As they took turns lighting up and getting ready, everyone was buzzing around them. There was a crowd three times the size of the crowd Saturday morning.

The balloons took off as the sun came up, and we learned about the Albuquerque Box Effect that morning. The reason the balloonists have chosen this particular area to launch such festivals is all based on the winds. Since the air is so cool in the October mornings, it creates the “box” for the balloonists to travel on the winds. The predictable wind patterns create a map the balloons can navigate from the festival and back again. The lower altitude winds travel from the north to south. The higher altitude winds travel from south to north. This creates a box that will take the balloons away from the park, and then they lower themselves and head right back! This makes the chasers’ jobs much easier since the balloons typically get to land back in the launch field or, at the very least, nearby.

Immediately, hundreds of balloons started piling in and setting up. There were people and balloons taking up every inch of the field that morning. I can only describe this sight as amazing. Balloons were as close as 12 feet from each other, all bouncing around while filling up with hot air. We were standing among them, feeling the heat and learning how they get in the air.

Mass Ascension was overwhelming that morning. There were more than 600 balloons, all taking off within seconds of each other. The sky was overflowing with shapes and colors. There were balloons that were special shapes like Snow White, lady bugs, a Wells Fargo Wagon, a milk cow, Spider Pig and much more! The shapes were all very interesting, but my absolute favorites were all the balloons with beautiful colors. It took more than two hours for all the balloons to rise into the sky. This was by far my favorite part of the entire trip. We perused the booths one last time and ate some delicious crepes from a vendor, then we headed on our way.

After a very rewarding weekend and a good night’s rest, we took the almost 12-hour drive back straight through on Monday. This trip was fascinating, and we learned a lot. I think it’s safe to say we would go again in a heartbeat, especially being more prepared.

Remember your layers, book your hotel in advance, and give yourself time along the road to see the sights. Heading in on Friday really helped us get a feel for what we were walking into, layout wise. You will not be disappointed by the food or the events. We cannot wait to hop back in the car and go again!