Not your typical workspace, Jeff Houghton’s on-stage The Mystery Hour desk is just one of the tidbits that make the show’s set as much fun to look at as the guests are to watch. Read on to learn how rented furniture and Houghton’s habit of breaking stuff 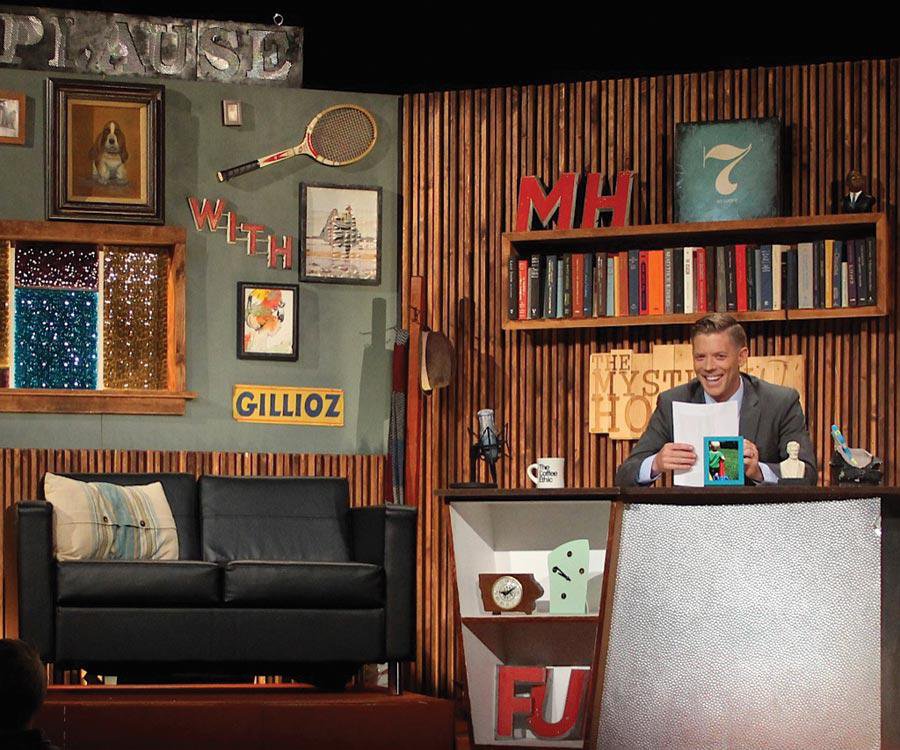 Where: Gillioz Theatre, 325 Park Central East, Springfield
When: Monthly, visit themysteryhour.com for the date and time of upcoming tapings
Price: $8

Watch it on TV

Where: FOX-KRBK
When: Saturdays
Time: 9 p.m.

Now in its fifth season, Springfield’s best and only late night talk show, The Mystery Hour with host Jeff Houghton, has come a long way since it started on the small stage at Randy Bacon’s gallery. The show now airs each Saturday on FOX-KRBK and is filmed once a month in front of a live audience. There are a lot of reasons to brag about our homegrown talk show, like the fact that each taping brings more than 500 people to the Gillioz Theatre, and if you’ve ever sat in on a taping, you know there are lots of interesting trinkets and mementos that grace the set. Now it’s time to take a closer look at those knickknacks and finally learn why Houghton keeps his pens in a broken bust of Abraham Lincoln.

Set Up and Take Down: The set of The Mystery Hour is actually not stored at the Gillioz. There isn’t enough room. Instead, on the day of taping, host Jeff Houghton takes a box truck to a storage unit and hauls the set back to the theatre.

Desk: When picking out the desk he would sit behind, Houghton didn’t want anything ordinary, so he headed to Habitat Restore to see what he could find. That’s where he found this custom-built desk. Funny thing is, the desk is more than just aesthetically unusual. It’s also taller than your average desk, which means Houghton has to sit on top of a pillow and a phone book.

Chairs: The guest chairs, end table and lamp don’t belong to The Mystery Hour. Houghton borrows items each month from Sunburst Contemporary Furniture, so Houghton never knows what he’ll be picking up, and the set always looks slightly different.

Pen Holder: That broken and jagged pen holder Houghton uses on his desk wasn’t always a potentially lethal office tool. Before becoming a pen holder, it was a bust of Abraham Lincoln that belonged to Houghton’s parents. Houghton broke it, and now it’s his ever-shrinking pen holder.

Set: The set is made up of four large flats that come together to create the mock living room where Houghton interviews his guests.

Carpet: Everything on The Mystery Hour set has to be rehung, reshelved and rearranged for each monthly taping. Even the carpet has to be brought in, and this isn’t just one large carpet. These are actually small carpet squares that Houghton has to lay out each month. There are some 28 squares; Houghton has counted.

Clock: The clock on the wall is one of the few permanent pieces of the set. Houghton used to borrow it from Sunburst Contemporary Furniture each month until he broke it. Now it belongs to The Mystery Hour and adorns the wall each month.

Books: If you’re wondering if those books behind Houghton are real, they are. Each book has had the middle cut out to make it lighter, and they are all put in their places before each taping.

The Mystery Hour Sign: The wooden sign that hangs behind Houghton is the only original piece of the set from way back when the show was filmed at Randy Bacon’s gallery.

Gillioz: While there are plenty of tchotchkes to talk about, the largest part of the set is the Gillioz Theatre itself. The beautiful theatre is a big part of The Mystery Hour’s atmosphere.