With Jessica Wooten in the U.S. Air Force and Morgun Yogore in the U.S. Army, this couple spends most of their time stationed apart. Learn how they planned the majority of their gorgeous Springfield wedding while on separate sides of the globe. 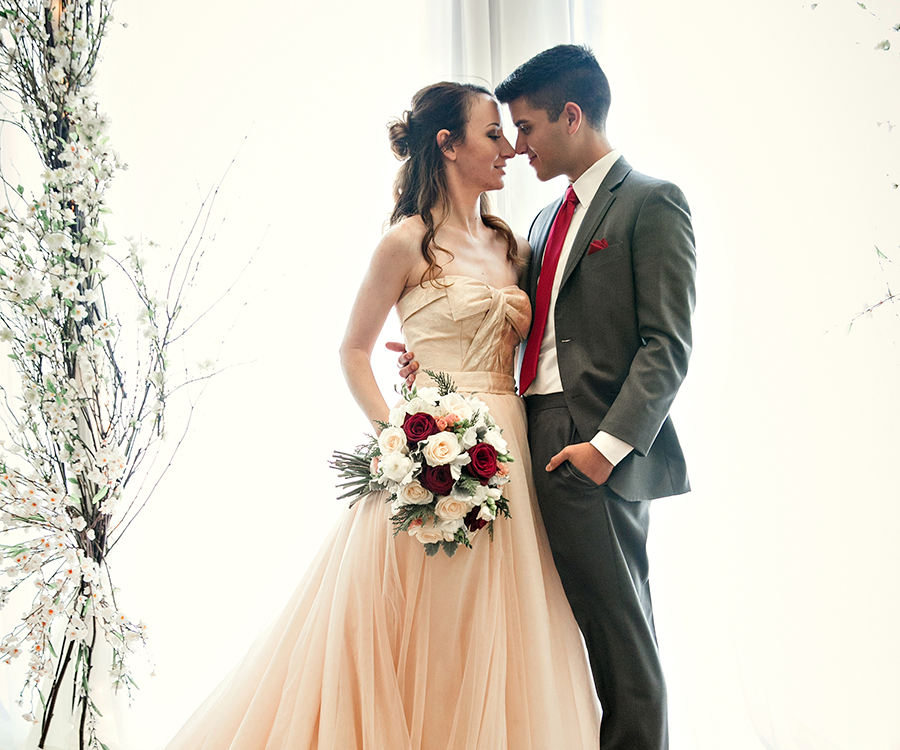 417 Bride:  How did you plan your wedding while stationed apart?

Morgun Yogore: We had a planning stage and an organizing stage. During the majority of the wedding planning process, Jessica was deployed to Afghanistan, so we would talk on Facebook chat maybe once every couple of days to bounce ideas off each other.

417: Were there any times one of you had to make a decision alone?

M.Y.: During the organizing stage, Jessica returned from her deployment and went back to California. I had to take off for training where I couldn’t even have a phone. So Jessica organized most of the wedding while I was gone. I got all of the ducks, and she put them in a row.

417: Did you ever get to have an actual live conversation?

M.Y.:  It was all via messages. I would send her a message when I woke up in the morning, and she would reply when I was asleep, usually. It was really only on the weekends where I would stay up or she would stay up and we could hash out serious details.

417: What kept you going when things got tough?

M.Y.: I wasn’t super particular on wedding details at first, but when I started seeing Jessica so happy and excited about it, it just bled through. Something I think most guys don’t realize is that the wedding really isn’t just for your fiancée. Your wedding is for both of you as a couple, and it’s something to share and create together. It is the first big hurdle to overcome and the first accomplishment to build together.

417: What did you learn about your relationship during the process?

M.Y.: We learned how to, with every obstacle in the way, approach something as a team and beat it together.

M.Y.: Jessica and I met while I was still in the second part of training to become a soldier. I work as a linguist for the military, and the first year and a half was spent learning a language so that I could work for the army. Then the following 6 months were spent learning how to apply that language to the needs of America and the Army. During that first year and a half, it seems to be a common occurrence for persons in the military to get married just to receive the additional benefits that being married provides. After watching several of my friends get married and divorced, it quickly became my opinion that getting married would be a bad idea. After advancing from the language portion of my training, I went into the technical portion (second portion) of my training with the complete intentions of just progressing with my career and trying not to complicate anything along the way. Several months into my technical training, a friend and I decided that our time would be best spent volunteering for the chaplains at our technical training. My first day volunteering during my induction into the volunteer program, I met Jessica. I was only supposed to go up in front of the current volunteers and introduce myself to the already existing volunteers. Naturally, my would-be wife was the girl in the back making fun of me. I’m not going to lie, my wife is gorgeous. So being the guy that I am, I immediately signed up for every open volunteer shift for the next week just so I could get an opportunity to speak with her. Eventually, I got my opportunity to spend a shift with her. She was funny and sweet. All around great. Too great, just about. I knew that she and I had different jobs and there wouldn’t be a very likely chance that we would end up in the same duty stations after our technical trainings ended, so I opted to just be her friend. It was an incredibly hard decisions because we had such great chemistry, but I cared for her too much as a person to have any kind of temporary relationship.

We kept spending time together. It was hard spending all of that time with her as just friend when I cared so much about her, but we just trudged on. Eventually there was a day where she had done really well on a test, and I promised to cook her a celebratory breakfast at the public kitchen on base. We had great food and an even better time. It was that morning when I realized how much we both had feelings for each other. Somewhat suddenly and spontaneously, I asked her out on a date. Although, I’ve gotta say, after thinking about it all, it still somehow feels like Jessica had a hand in that. She knew me too well.

M.Y.: I proposed to Jessica over the Christmas holiday of 2012. It was an easy thing for me. It was easy for me to want to marry Jessica. We’d been together for about a year, and in that time, my feelings had only grown more and more for her. It was sometime in about November when I realized that there couldn’t possibly be another person out there that could make me as happy as Jessica made me feel every day. So I went ahead and got the phone number of her best friends. I remember that I called her best friend, Kitty, and asked her if I could have her blessing to marry her best friend, because I knew how much that she meant to Jess. She was super excited, but told me that I’d have to also get it from her husband Greg as well, who has kind of a reputation of a badass. I will still never forget what he promised would happen if I ever broke Jess’s heart.

After that, her best friend helped me pick out a ring. It was all by phone. I would go ring shopping and just keep sending her pictures of rings and asking her if it was perfect. It took me several tries. A couple severals. I think I ended up looking at every ring in at least seven different stores before I found the right one. Her friend agreed, and so that’s the ring I bought her.

I worked the proposal in with one of Jessica’s family traditions. Every year, they exchange Christmas ornaments between the close family members as part of their Christmas celebration. It’s something I had learned about several months earlier while Jess was telling me some stories. So, I went out and got an ornament and had it engraved with the question. THE question. When Christmas came around, I spoke with her parents, they gave me their blessing, and we all agreed to wait until they did their pre-Christmas ornament exchange. That’s the ornament I gave her. Looking back, she never actually said yes through all of the crying, but we’re married. I’ll take it as implied. 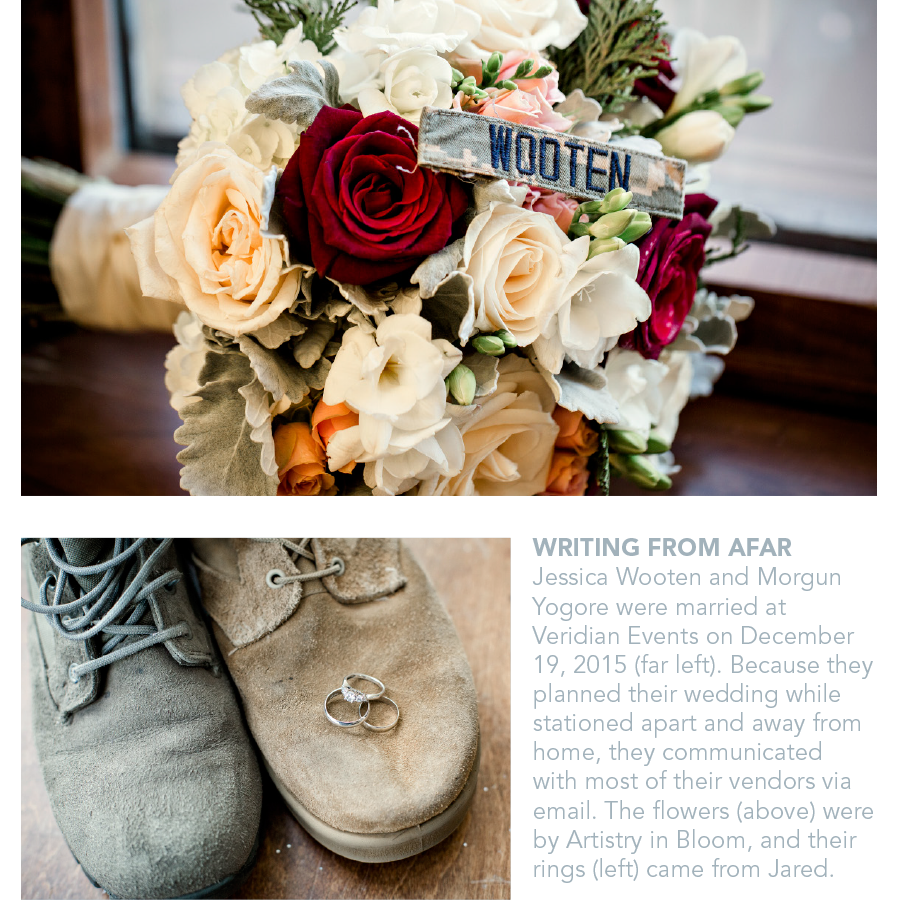 417 Bride: How did you work through the challenges?

Jessica Wooten: I think we worked through them by just being understanding of our situation. Considering he was in the military, too, he had a good idea of what I was dealing with on my end. We made sure we kept in constant contact and knew each other’s schedules.

417: What did you learn about your relationship during this process?

J.W.: I learned that Morgun is incredibly supportive, and he’s willing to do anything to make my life easier. I also realized that we had even more in common than I thought, and we work incredibly well as a team.

417: What is something you really liked about the experience?

J.W.: He originally proposed when we were both home during Christmastime. A couple days later we decided to go and legally get married because I was about to be deployed. So we had a civil service with two of our friends. It was really nice to have a little moment of our own together first and then also get to experience a big wedding when we both came back home a year later.