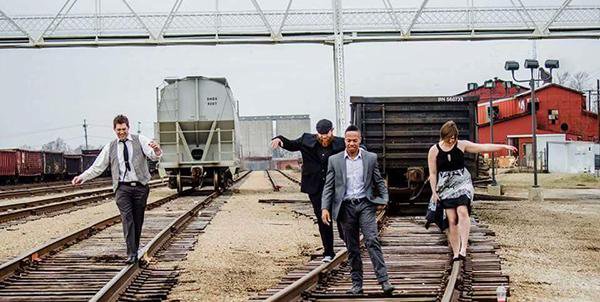 ​No matter the level of success, style, or skill, musicians—at their cores—are nearly identical. Bryan Copeland noticed evidence of such when his band Luna Jamboree opened for the Ozark Mountain Daredevils in June.

Beyond being what he describes as one of the coolest experiences yet for the band, Copeland says he found a lot of value in noticing the interactions of a big-time veteran band.

“Seeing how they interact backstage with each other and onstage with fans, how they were preparing for the show, musicians are all kind of the same,” he says.

Before their set, the bands were backstage displaying the same nerves that Copeland experiences in preparation. “It’s cool to see that it’s not that much different, even when you have a name as big as the Daredevils,” he says.

It shone a ray of hope for his band, which continues to push its boundaries in style and in travel.

Nothing has increased the band’s confidence, though, like stage experience together—different venues in different places, and, of course, practice.

Portions of Luna Jamboree have been playing together for most of a decade. Copeland and keyboardist Tyler Mathews have played together since 2008 and with bassist Kim Painter since 2010. Tom Pearson filled out the quartet’s current lineup in late 2013.

“People are going to notice the more comfortable you are on stage,” Copeland says.

A brief CD-signing session in Norman, Oklahoma, brought affirmation. “When it’s a bunch of people you don’t know, you feel like you’re doing something right,” he says.

The band released Phases in April—available on most digital outlets—and already has six songs written for the next project.

Whether it’s a full album or a single, Copeland says the group is dedicated to keeping music coming. “We’d like to release new music at least twice a year,” he says.

Luna Jamboree has tended to lean more to its funky tendencies, but Copeland says the frontrunner for the next album’s lead single is a little more pop. “[Mathews] even gets to rap at the end,” he says, without noting a timeline to drop “Hooked”.