A bartender, a liquor rep and a chef walk into a bar…and create a pop-up restaurant. And that’s no joke. 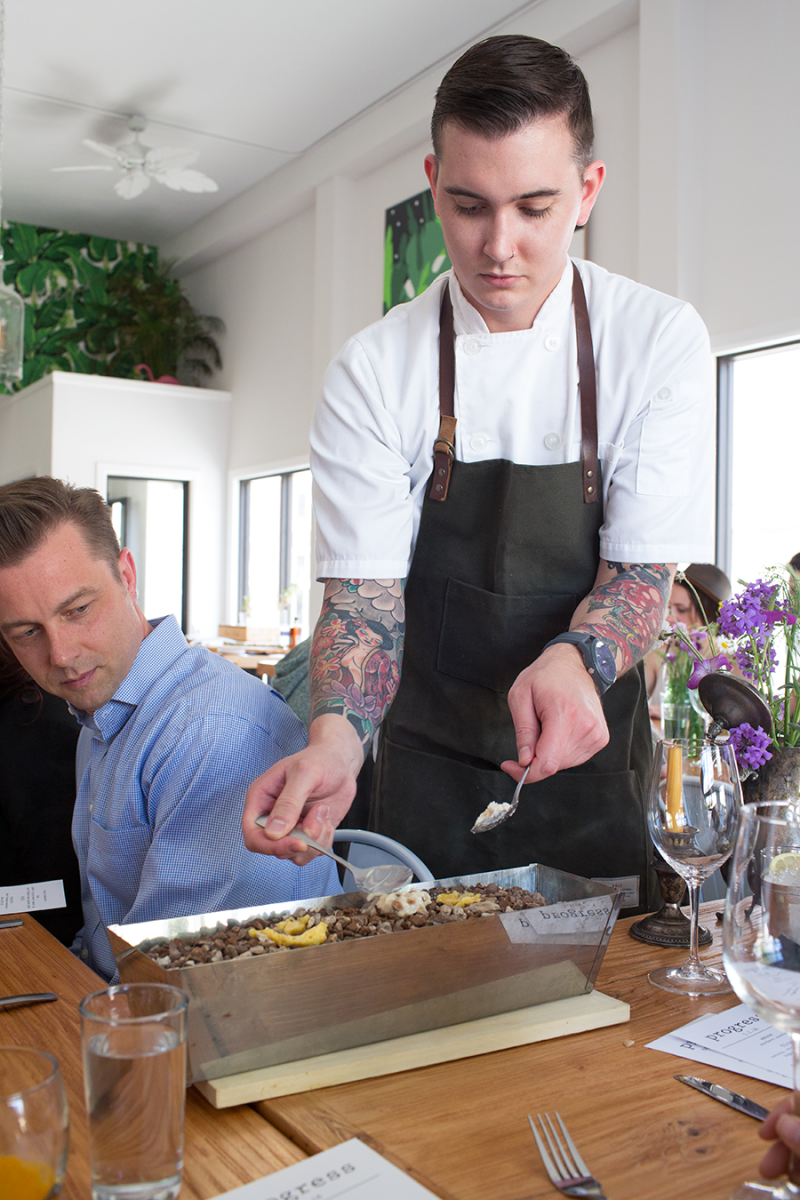 Daniel Ernce tops hot stones with a cornmeal, butter and bourbon-infused bacon fat mixture to fill the restaurant with a savory aroma.

Visit the site for information about upcoming events. For reservations and more information, email progresspopups@gmail.com.

Millennials catch a lot of flak for being lazy and entitled. But those are two words you would never use to describe Cassidy Rollins, Michael Schmitz and Daniel Ernce, the trio behind a pop-up restaurant series that is shaking up the Springfield dining scene. They all happen to be Millennials, but they also happen to be incredibly driven and hardworking. On top of having demanding full-time jobs in the food and beverage industry, these friends decided to take on the challenge of creating a brand new restaurant every four weeks. Each time, the restaurant is staged at a new location with a new theme and a brand new menu. It opens and closes in the same night, never to be repeated. In May, the progress pop-up team took over The Golden Girl Rum Club for its first pop-up event, and I was lucky enough to receive an invite. 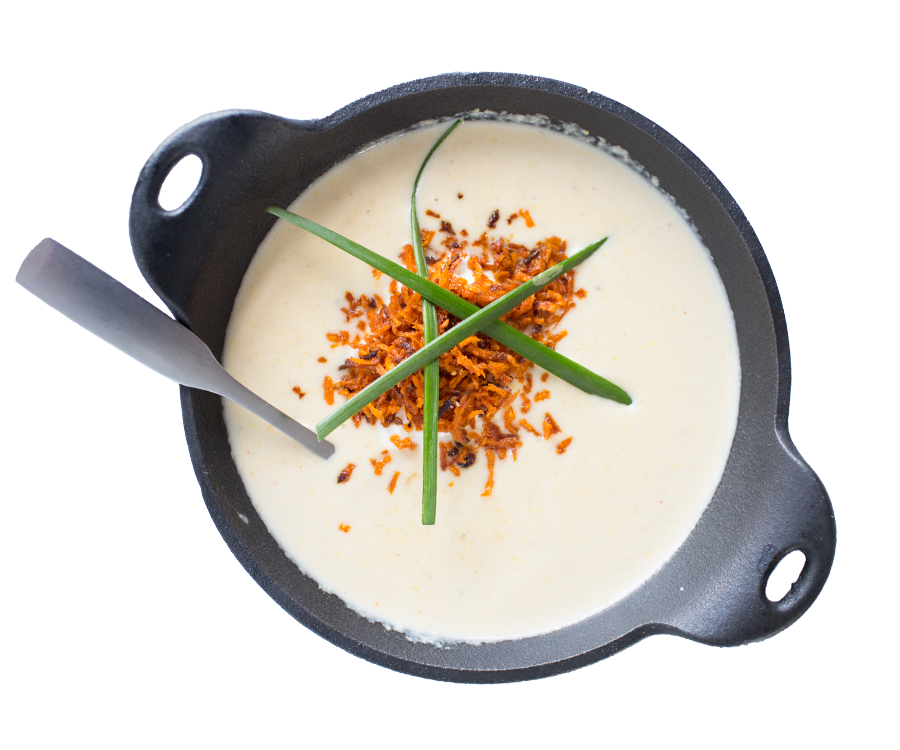 The crispy sweet potato topping adds texture to the crab and corn bisque.

I started off the evening by trying to enter in the wrong door. The front door of Golden Girl had been locked, forcing guests to use the side entrance. The reason quickly became apparent. The bar had been rearranged to enable the team to control the dining experience of the 16 guests who had managed to snag a ticket. When I walked in I was greeted by Cassidy Rollins, who almost immediately offered me an aperitif. An alcoholic beverage, an aperitif comes from French tradition and is designed to awaken the palate. The evening then transitioned into cocktail hour, which included hors d’oeuvres. The theme of the restaurant was branded as high-end low country. The cocktails followed suit. Low-Country Tea, The Cobbler and Honey Hole were my choices for the evening. I opted for the Honey Hole, which was made with whiskey, amaro liqueur, honey and orange peel and was served neat. I was in honey heaven. The bitterness of the amaro balanced the sweetness of the whiskey and honey for a complex and flavorful drink. Rollins and Schmitz were responsible for the cocktail menu. For their day jobs, Rollins is a bartender at Barley Wheat & Rye Social House and Schmitz is a sales representative for Vintegrity Wine and Spirits. The food, however, was where Ernce’s expertise came into play.

Ernce is the research and development assistant at Food IQ, which is part of the Marlin Network. The menu was broken down into five courses, but the meal began without a single bite of food. As we sat there waiting for our first course, metal containers appeared on the tables filled with piping hot gravel. A curious gesture no doubt, but once the stones were topped with mixtures of cornmeal and butter and bourbon-infused bacon fat, everything made sense. As the mixtures started to melt on the hot rocks, aromas filled the space, and my anticipation for the meal ahead started to grow. 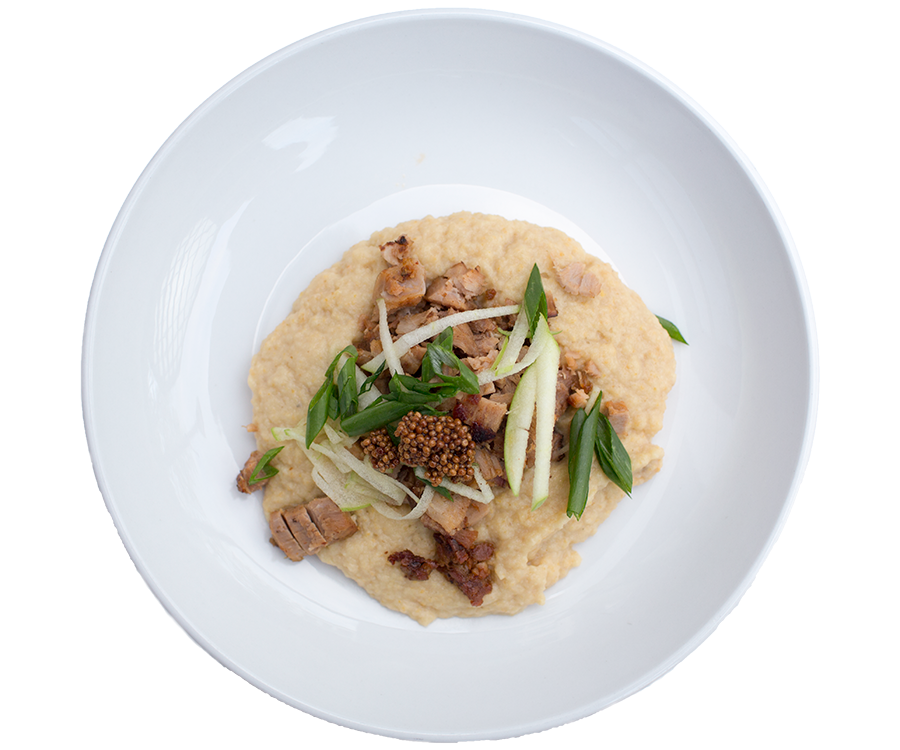 It was clear from the menu that Ernce had ambitious goals. He was interested in more than simply creating tasty dishes; he wanted to produce technically challenging food. He was trying to elevate classic Southern fare into dishes that could be at home in a fine-dining restaurant. The first course consisted of carrots with dry-aged beef fat, caramelized yogurt and smoked salt over greens. The second course was crab and corn bisque topped with whipped chevre and crispy sweet potatoes. For the third course, Ernce explained he wanted to do a twist on chicken and dumplings and offered up oxtail dumplings over a caramelized soubise sauce and brioche with chives. The fourth course, the main event, was reconstructed pulled pork with popcorn grits, apple slaw and pickled mustard seed. A honey bourbon bread pudding was served for dessert. 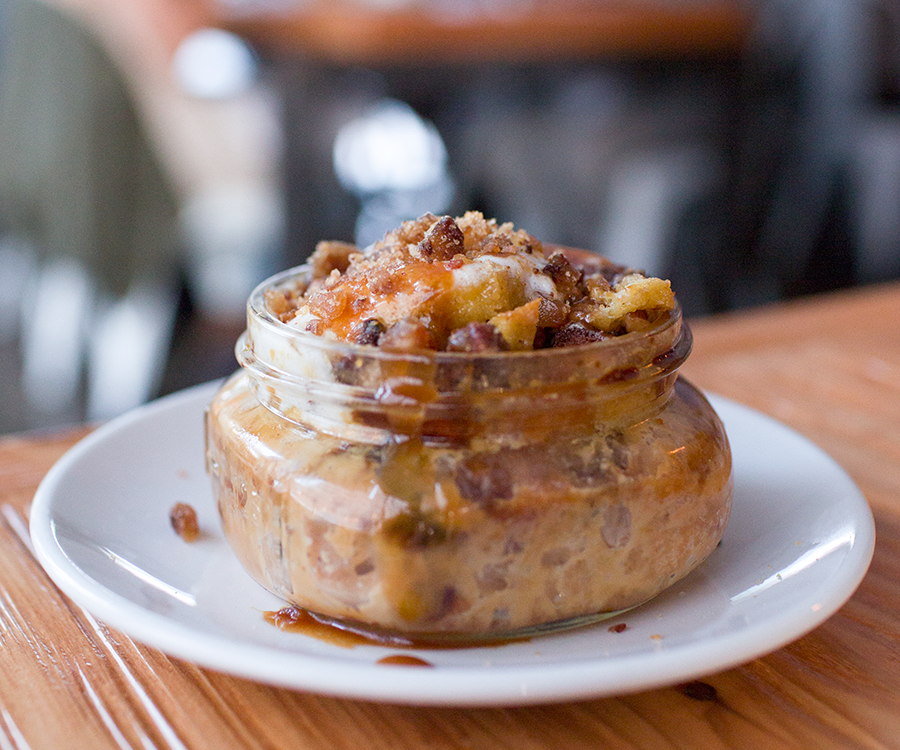 Overall, the meal was a mixed bag. The service was excellent, the wine pairings were well-matched and the menu was clearly created with a lot of thought and ambition. However, I found the execution of some of the items lacking. To start with, the second, third and fourth courses came out lukewarm or cool, and the best dish doesn’t stand much of a chance if it’s not the proper temperature. I also found that many of the dishes, at least for my taste, needed seasoning, and there was no salt in sight. The dessert, however, was perfect. Ernce was inspired by a Paula Deen dish and made it even more delicious with the addition of bourbon, pork fat caramel, bacon brittle and whipped yogurt.

At the end of the evening, guests received soft bourbon caramels as parting gifts. As I walked out the door, I was excited to see what restaurant the Progess team would dream up next.

Q & A with the Owners

417 Magazine: How did you decide on the menu for progress?

Daniel Ernce: High-end low country felt appropriate for Springfield. It was sort of that upscale Southern flavor that I feel is pretty approachable for a Midwest palate. But you could still do it in a way that was atypical and that people would still enjoy.

Michael Schmitz: Weirdly enough, Southern food is under-represented in Springfield. You wouldn’t think it is because you think, “Oh, we’re far enough to the south,” but we don’t even have a fried chicken place here. You can’t not get addicted to Southern food.

417: What’s your favorite liquor to create cocktails with?

Cassidy Rollins: I make cocktails seasonally, so with it being spring and summer, I’ve been really into mezcal. The big popular spirit right now is amaro and fortified wines. Bringing those kinds of artisan pieces in the picture of the cocktails is really fun.

417: Where did the name progress come from?

D.E.: Wes [Johnson] and I were hanging out at Barley, Wheat & Rye one night, [brainstorming] about great names for a restaurant. Progress embodies everything that we’ve come from, everything we stand for and where we’re going because it’s a process. It encapsulates the idea that we’ve all been working in the industry, we’ve all got experience and background but then pulling that together.

417: What speed bumps did you encounter along the way?

D. E.: Josh Widner [one of the co-owners of The Golden Girl Rum Club] was like, “Something is going to go and catch you way off guard, something super-critical or basic that’s just going to catch you out the blue.” I’m putting soup up and Cas goes, “We don’t have spoons.” We had to find spoons, wash spoons, get spoons out. Spoons was our hurdle.

C.R.: You can always count on [hang-ups] to happen, because there is always going to be something. The good news is there’s always a solution. You just have to find it really fast. 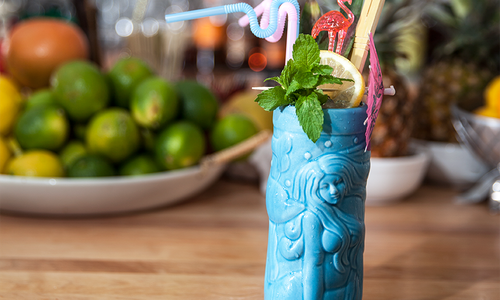 Four young movers and shakers team up to create a rum bar that is making waves in downtown Springfield and beyond.