We take a lunch break at one of Springfield’s food trucks, where homemade is the rule of the game. 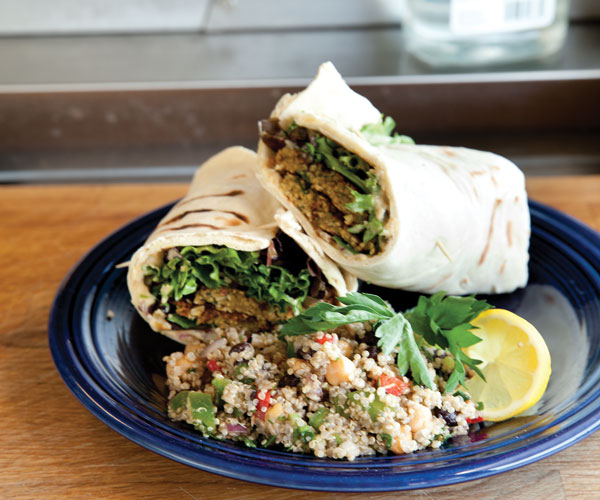 After spending several weeks following the ever-changing menu on Cecil’s Facebook page, I decided to enjoy my lunch break curb-side and sample the eclectic fare. Since opening last August, this joint has cooked up a little of everything from gumbo to Indian chickpea and butternut squash soup. It all depends on what owner Cecil Manning is craving that week.

When I stopped by one warm afternoon, Manning’s taste buds must have been craving comfort food. The week’s menu boasted pulled pork, hearty falafel and hummus wraps and meaty tacos. Everything sounded wonderful. I ordered the falafel and hummus plus a side of quinoa and bean salad while my boyfriend, Ryan, ordered the pulled pork and a soda. Since the weather was nice, we decided to hang out in front of Cecil’s while we waited for our food. Ryan mostly people watched (there was a guy power washing some graffiti off the side of CVS) while I read a small news clipping posted on Cecil’s window. Turns out, Manning, who is from Louisiana, was vegetarian for four years. That would explain why so many of Cecil’s weekly specials and regular menu items are vegan- and vegetarian-friendly, including my falafel and hummus wrap.

Once our orders were ready, Ryan and I toted our grub back to the car where we rolled down the windows and turned up the radio. Even with the hum of Glenstone traffic droning on behind us, it was a relaxing lunch. Nearly everything at Cecil’s is handmade, including the flatbread. It’s a cross between naan and pita, and oh man is it good! It’s chewy and soft and thick enough to not let the savory contents inside slip out but thin enough that you don’t end up with a mouthful of bread.

The falafel came in large, smashed patties that were seared on a flat-top grill instead of being fried, and slivers of red onion, crunchy cucumber and mixed salad greens were folded into the sandwich. Tucked inside a protective sheet of foil, this hand-held meal was an absolute treat. It was filling but not greasy and the crunch of the fresh veggies complemented the richness of the falafel and hummus.

Ryan’s pulled pork sandwich came in the same dreamy flatbread with a mix of red onion, pickle and lettuce hidden between bites of tender, juicy meat. Unlike a lot of other pulled pork sammies, this one is sauce-free, which means you can really taste the natural flavor of the pork. In 3 minutes flat, Ryan had devoured his meal and was greedily eyeing my falafel. Instead, I offered him half of the quinoa and bean salad—a regular item on the Cecil menu. The salad is packed with protein thanks to the combination of nutty quinoa and plump black beans and chickpeas. Served cold with bites of sharp red onion and green bell pepper, this simple side dish was a refreshing way to end such a hearty meal.

With our food devoured and the sun beaming down, we tossed our trash and pulled out of the parking lot with plans of returning to try more of Manning’s eclectic culinary treats. 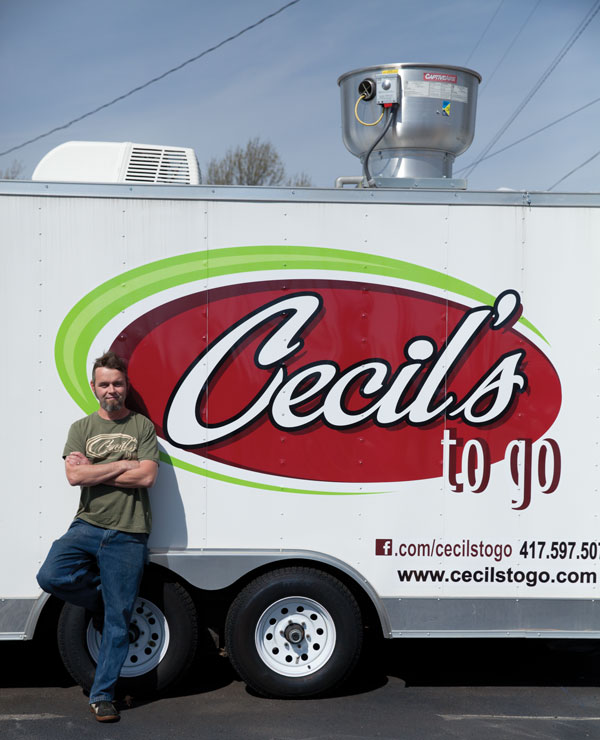 417 Magazine: What is your foodie background?
Cecil Manning: I’m from Louisiana and learned to cook from my mom and grandmother. I really got into it when I went vegetarian. I couldn’t find good food, so I had to learn to cook for myself.

417: What brought you to Springfield?
C.M.: I went to Drury and studied biology and chemistry. You’d be surprised at how much of those two degrees comes in handy in the kitchen.

417: Who was your cooking inspiration?
C.M.: The old-school people like Justin Wilson and Emeril Lagasse and Paul Prudhomme were strong influences. It’s about using what you have in front of you to make something you can really enjoy.

417: What are your favorite ingredients?
C.M.: Chilies, garlic, onions and celery are the base for everything I do.

417: What were you doing before Cecil’s?
C.M.: I was a professional brewer.

DOUBLE BONUS | Cecil’s also serves its food at Farmers Market of the Ozarks on Saturdays from 8 a.m. to 1 p.m.