Digital Director Dayle Duggins finds what it means to live the rugger lifestyle with the Queen City Chaos. 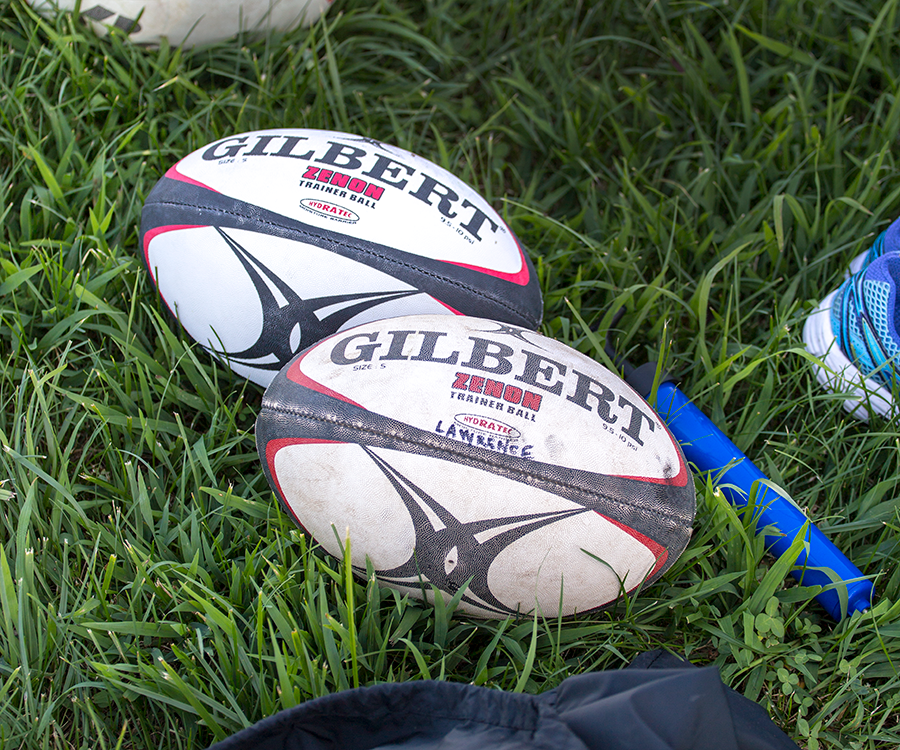 Type of Activity
Rugby is a high-intensity sport where two teams pass an oval-shaped ball backward down the field to score points.

Time
Women practice twice a week on Monday and Thursday nights and play on Saturdays.

Don't Forget
Cleats, water, a mouth guard, rugby shorts and a shirt you don’t mind getting ripped or dirty

Growing up a soccer player, I’ve always considered myself pretty tough. Taking a cleat to the face, having a ball mark on your leg for a few days and getting slide tackled were rites of passage. So, when I received an email with the subject line “Springfield Women’s Rugby,” I was intrigued. I clicked on the mystery message, and inside was an invitation to try my hand at rugby with Queen City Chaos, the women’s team affiliated with Springfield Rugby Football Club. Hell, yes.

So began my conversation with Jody Lawrence, the women’s coach and membership manager. She had seen one of my previous Get Fit articles, and wanted me to come out for a rugby practice. This year also marked the first year for Olympic women’s rugby, so it was perfect timing to help spread the word about the team.

After a few months of communication, we finally landed on a date. I’d be making my rugby debut at the Queen City Chaos’s first practice of the season.

Before I laced up my cleats, I needed to learn about the sport and its history in 417-land. I researched the playing field and basic rules, then watched highlight videos. The game is played with an oval ball that can be kicked, carried and passed to teammates—only in a backward motion—to score points. A mixture of American football and soccer, a “try” is similar to a touchdown or goal and is worth five points. After scoring a try, a conversion kick that passes over the crossbar of the goal is worth two points.

Next, I called Bryan “Cooter” Bevel, president of Springfield Rugby Football Club. He’s played the game for more than 25 years, garnering a broken jaw, knee surgeries and other substantial injuries. “It’s the best sport in the world,” Bevel says.

He explained that the men’s branch of the Springfield Rugby Football Club was established in 1983 followed by a women’s team in 1998, but support was lacking, and the team died off. In 2015, a ladies’ league became a point of discussion. “It was a no-brainer to start a women’s side,” Bevel says. “Now we have one board and one checking account.”

According to Bevel, less than 1 percent of rugby clubs in the country own their own facility. Springfield Rugby Football Club is lucky to be among that minority with a pitch you can see when driving along Interstate 44. A club sign marks the gravel road that leads to the pitch, a huge grassy area where the teams practice and play. Excluding the goal posts, a rugby pitch looks a lot like a soccer field. It’s 100 meters long with a try line at each end and two sidelines. 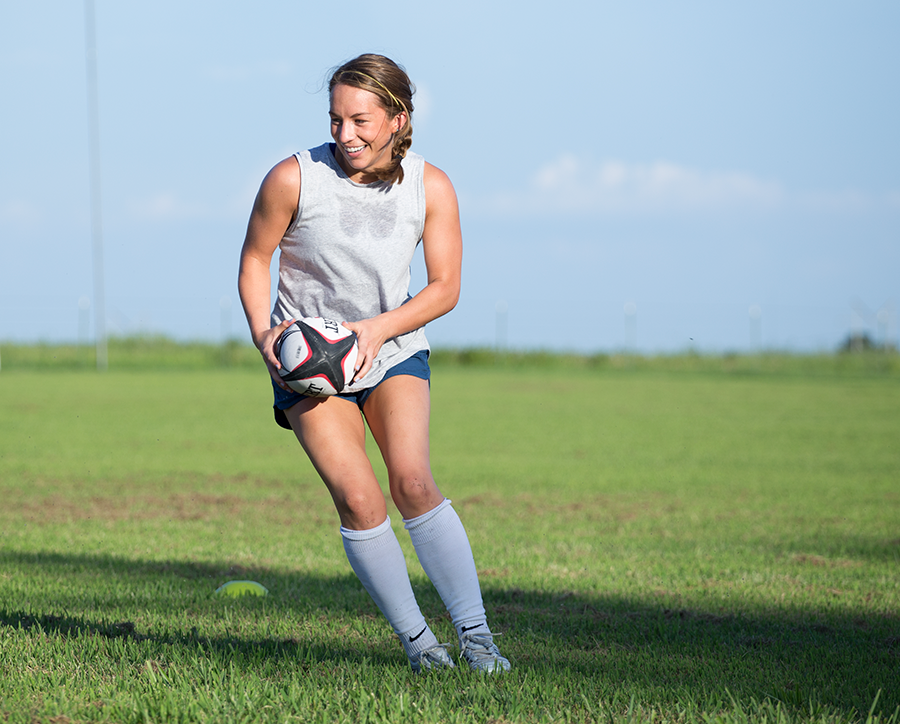 After talking to Bevel and watching some really impressive highlight videos, I was antsy to hit the field and break a sweat. I finally met Lawrence face-to-face, and she introduced me to the rest of the team. The men’s league was already out on the field, so we snagged a spot next to them. We started out by doing a casual toss followed by a warm-up lap, stretching, calisthenics and passing drills. Throwing the oval ball was weird because I’d never laid hands on one before, but I got the hang of it pretty quickly.

We didn’t have anywhere near 15 players for a full field, so we moved into a four-versus-four scrimmage with two-hand touch tackling. Here, I got to see how fast-paced the sport is and how challenging it is to drop back so your teammates can pass you the ball. There aren’t many sports where moving backward helps you win.

Between scrimmages, we practiced rucks and scrums. I still don’t completely understand these terms, but they allow teams to regain possession of the ball once it’s been tackled to the ground. The women assured me that it’s one of those things that you really only learn completely after playing the game for a while, and it’s still confusing for many of them. Fake it till you make it, I guess.

Finally, we did some agility training complete with push-ups, squats and burpees. By then, my light gray shirt was dark gray with sweat and every inch of my body was itching from the bites of massive amounts of mosquitoes that apparently love rugby players.

After practice, the women’s and men’s teams mingled and chatted about the season, which started in September and runs through mid-November. Occasionally, the teams even scrimmage together. The women play in Columbia, Missouri; Lawrence, Kansas; Kansas City; St. Louis and Wichita and also travel for tournaments. From practicing next to the men, and the post-practice banter, I got a better feel for the rugby culture. It’s the type of sport that promotes playing your heart out, giving your teammates a hard time (all in good fun, of course) and having a drink or two—even with a rival.

“I love the sport, I love the closeness of my team and other teams,” Lawrence says. “It’s a social sport, and even with other teams there’s a sense of camaraderie because the people are alike and it’s a smaller sports community.” 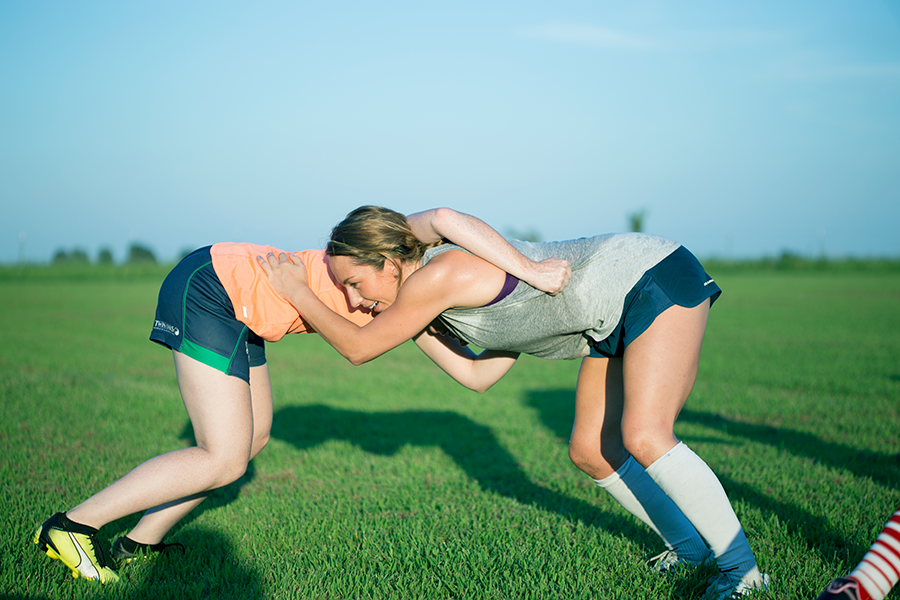 Digital Director Dayle Duggins practices scrumming with one of the players from Queen City Chaos.

Since we didn’t play full-contact rugby, I didn’t have any goose eggs, black eyes or bruises to show off to my co-workers. Instead, I had more than 20 mosquito bites covering my bod.

I can only imagine I would be incredibly sore had we played the game at top speed since I’m not used to being tackled, though tackling is a bit gentler than my initial perception. “People always look at rugby and they’re like, ‘It looks so rough!’” Bevel says. “Most of the contact and things that are happening happen from three or four meters apart.”

Practice did, however, leave me wondering what it’d be like to live the lifestyle a true rugger. For now, I think I’ll stick with soccer and rugby spectating.