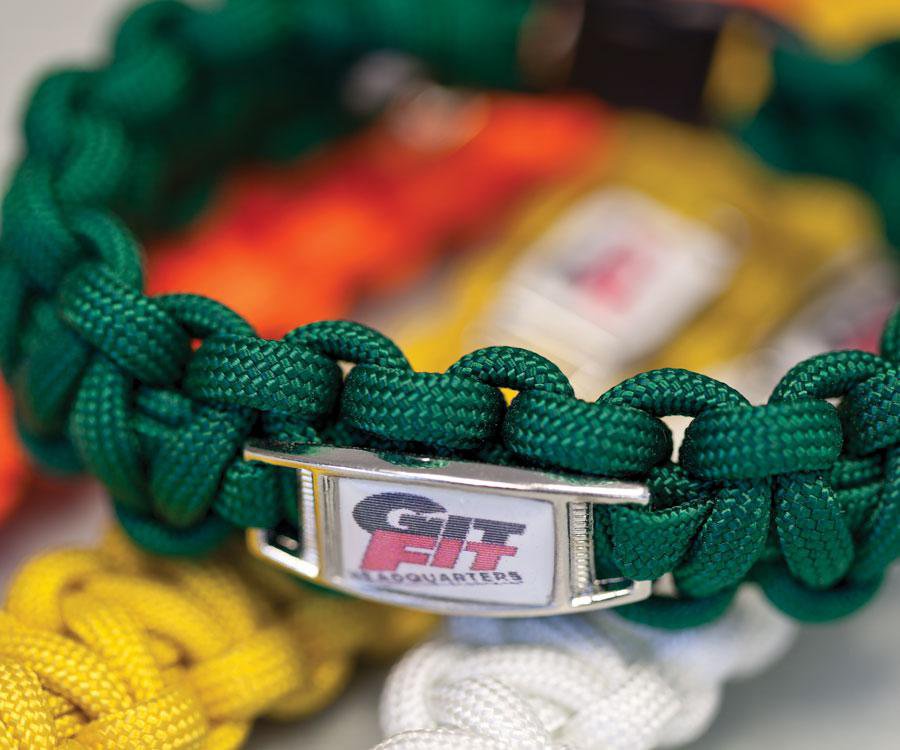 Ahh, the dreaded plank. This exercise (which looks so simple!) has never been a friend of mine. I’ve tried it with friends in the past, but I never lasted long, and it never really seemed to matter. This all changed one week ago, when the cursed plank position made me receive a big fat F on my Level 1 FitRanX testing at Git Fit Headquarters. Now you’d think I would never want to plank again, right? Wrong. Now I want to practice that plank, and I want to perfect it. That’s what this class does to you—it makes you want to work.

Git Fit Headquarters isn’t the kind of gym where you’ll spend hours among a sea of treadmills. It’s a personal training gym that offers one-on-one training and small group training, including a new series of FitRanX classes. FitRanX is a standardized ranking system that is used to gauge fitness levels. To learn your fitness level, your trainer or instructor waits until they feel you’re ready, then you’re invited to perform a standardized fitness test. But even before you test, you can take part in the FitRanX classes to master your skills.

Unless you’re me. I wanted to write about the testing for this article, so I tried it out the first time I ever stepped foot inside Git Fit Headquarters. 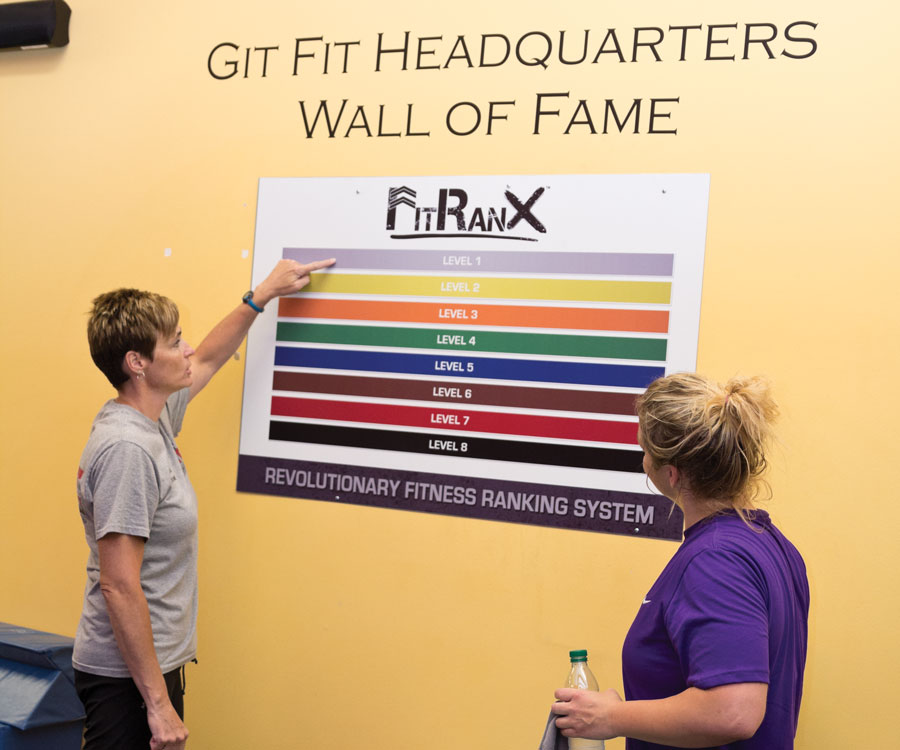 Tammy Eaton, a personal trainer and the owner of Git Fit Headquarters, explains the FitRanX levels to Savannah Waszczuk.

I worked with Tammy Eaton, who is a personal trainer and the owner of Git Fit Headquarters. After I warmed up with a quick 5-minute jog on the treadmill, Eaton explained the FitRanX system to me. Typically, she invites her clients to test for FitRanX when she feels they’re ready. “We don’t want anyone trying out and failing,” Eaton says. Since she mediates the test, she knows the areas individuals will be tested on, and she is able to work one-on-one with her clients to help prepare them. But since I wasn’t able to spend weeks prepping with Eaton, we decided to jump in and test my skills on Level 1.

FitRanX tests on both strength and cardiovascular fitness. My 29 years on this planet put me in the younger age bracket, ages 16–35, so my Level 1 testing started with a series of strength exercises. First I was challenged to do 30 bench dips. I was a bit tired by the time I got to the upper 20s, but I did this with no real strain—pretty easy peasy. Next I did 50 overhead towel squats. Squatting is tough for me. I can never get my form right, and I get so frustrated! But Eaton helped me figure out the right stance and had me perform my squats in front of the mirror, which helped immensely. I busted the 50 squats out within the 2-minute time limit, and then I hit the mat for pushups. These pushups were performed from my knees, but they were still a challenge—Eaton put a weight down and made me touch my chest to it each time. She yelled at me to “go down farther,” but I swear, I was touching it every time!

After I struggled through those 25 pushups, it was time to hold my body in a bridge position for two minutes. This is where it started to become a bit more challenging for me. The bridge is done by lying on a mat, bending your knees and lifting your entire core and behind from the ground. And it’s no weak lift—Eaton makes you hold your form up high. No shortcuts are allowed here! But to help pass the time, Eaton told stories and talked to me, and I made it. Next, I had to perform 20 reps of a 45-degree row, which I had no problem with. At that moment, I was feeling like a real rockstar.

But then, just as I was happily going along thinking I was going to pass the Level 1 test with flying colors, we reached my greatest fitness enemy: the plank. To work my core and abs, I was challenged to hold a plank on my forearms and toes for a minute and a half. I started out strong, but about 45 seconds in, I started to feel it. By 60 seconds, my entire body was shaking and my form started to fail. Eaton kept yelling, “Get that butt down! Get that butt down! You don’t want your butt sticking up like that in the photos!” But I didn’t care. I could barely hear her, in fact. All I could think about was how every single second was dragging on for what seemed like an eternity. My legs were shaking and my abs were on fire. Sweat was slowly dripping down my face and falling to the mat below. I wanted nothing more than to just let go. I tried my hardest, but around 75 seconds, my arms and core gave one last shake before they gave out, and I tumbled onto the mat like a tired old rug. At that point, I knew I had failed. The evil plank had won yet again.

I pulled myself together, and I went on to finish out the Level 1 test. It ends with a conditioning portion of kettlebell swings, mountain climbers, jump rope and seal jacks (which are similar to jumping jacks but have you cross your hands and your feet with each move). These exercises are all done back to back for 30 seconds each, and they make you work. If you’re not used to sprinting or quick bursts of cardio, you’ll struggle here.

I was a bit discouraged by failing the Level 1 test until I talked to Eaton about my performance. “Most people don’t test immediately—everyone starts at a level 0, technically,” she said. Then, she told me that she is a Level 2, and her most advanced clients at this point were Level 3s. “After about three weeks of work, I could have you pass Level 1,” she said. And the best part is, the classes are open to everyone. If I wanted to prepare to pass a level myself, I could attend a FitRanX class at anytime. 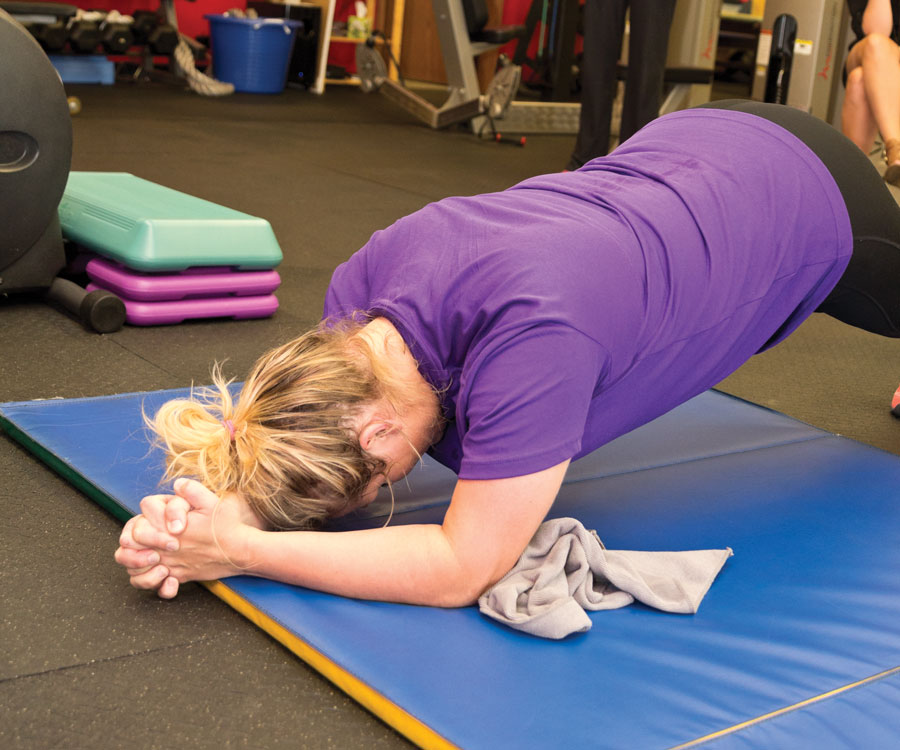 While testing for FitRanX, a new standardized ranking system that provides strength and cardiovascular workouts, Senior Editor Savannah Waszczuk struggled to hold the proper plank position. In fact, it was her inability to plank that made her fail.

Attending FitRanX classes gives you a full-body workout. “You’re getting cardiovascular work plus strength work,” Eaton says. “You have to have both of these—especially women.” But that’s not all FitRanX is about. It helps make people feel like they’re a part of something, and that they’re well on their way to achieving their fitness goals. “We make certificates for people when they pass a class, and we make everyone hand-made bracelets to wear that go along with their level,” Eaton says. And the classes are also designed to be motivating. “Levels and testing also help bring out a bit of competitiveness,” Eaton says. It certainly worked for me. Now I want to go back, try again and show Level 1 (and that damn cursed plank) who is boss.