Gabriel Crouch is a sophomore at Parkview High School, and when he’s not studying, he’s running the growing Blades & Shades Salon/Spa on Cherry Street. 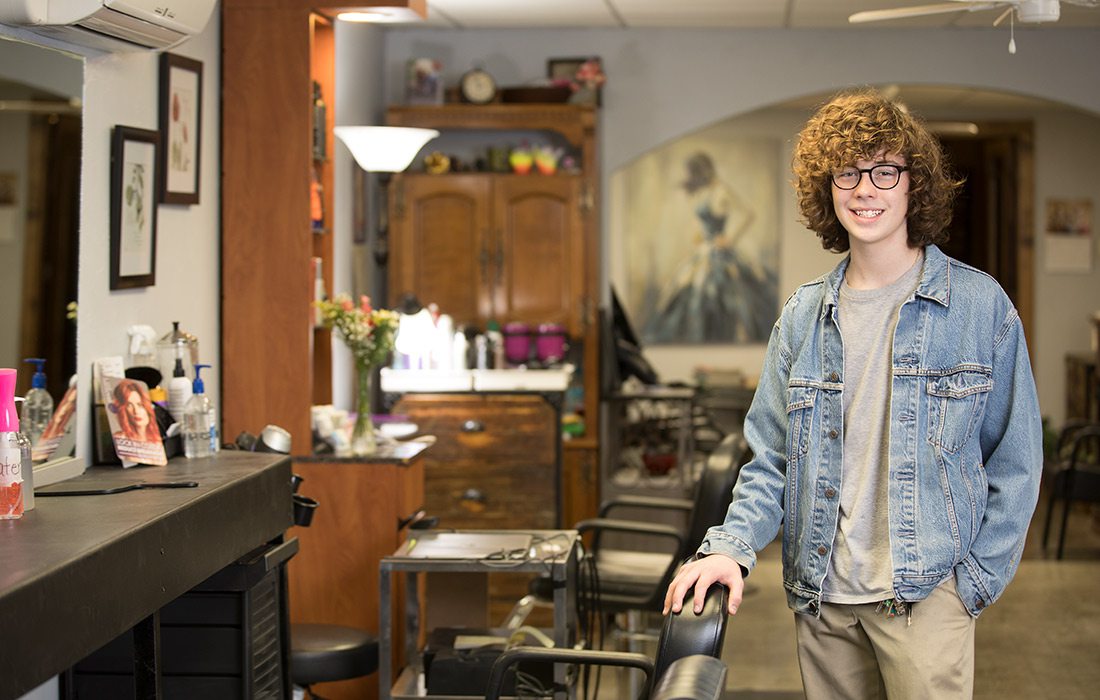 Gabriel Crouch dresses like someone who is very confident in who he is. His style is distinct: denim jackets, shaggy, curly hair that makes a statement in whatever room he’s in, striped sweaters—it’s the look of someone wise beyond their years who knows exactly what he wants. Crouch has pretty much always been this way—from a young age, he’s run one business or another, from bike repairs to hawking laundry detergent to flipping cars. He’d take some of that money and feed 20 percent of it back into investments his mother made for him at a young age. Crouch was always learning about money, so when you learn that he owns and runs his own business, Blades & Shades Salon/Spa, at the tender age of 16, it starts to become a little less surprising.

Crouch keeps to himself, so the novelty of this isn’t palpable—most people aren’t aware of his age. Why shouldn’t a 16-year-old be in charge of a salon?  He didn’t tell anyone how old he was when he interviewed candidates. One of his employees even thought he was three years older. He doesn’t tell a lot of people at school about the salon, and says that this is on purpose. Being a teenager is a tenuous time when you want to broadcast to the world your every move and location in an effort to get others to notice. But Crouch prefers to simply go about and run his business. He says that a lot of people don’t believe him when they hear about his full-fledged business, and that he understands their skepticism. But Crouch has been preparing his whole life for this—he says that he has always wanted to own a business. Crouch is type of kid that, growing up, your mother might ask accusingly, ‘Why you can’t be more like him?’

Just like with any new business, there have been learning curves—for a first-time owner of a large-scale business, things that might seem simple at first, like payroll and hiring employees, start to pile on top of each other. Crouch emphasized bringing in people who knew what they were doing; this helped him shoulder the load a bit. “I try and take really good care of my employees, and in turn they take really good care of the clients,” Crouch says.

Pretending that this is normal is not really an honest exercise—of course there aren’t a ton of teenagers in charge of the paychecks and livelihood of people twice their age. That’s what makes Crouch’s story so remarkable, regardless of how much he might defer or be so ho-hum about the whole thing. And as for the future, Crouch plans to graduate in May 2020 and go to college. But for now, he’s going to enjoy delivering fresh cuts to the Springfield, MO masses.

“It definitely does hit me,” Crouch says. “There’ll be a time every couple weeks where I’ll have just been in it and not really thinking about what I’m doing in the big picture, and I step back and I’m like, ‘Whoa, 16 [years old]. Going to school and doing all of this.’”

Interested in booking an appointment?
Visit Blades & Shades Salon/Spa online or in person.