Curious about the experience, we sent staff writer Savannah Waszczuk into surgery with Dr. Shachar Tauber, an ophthalmologist at Mercy Springfield. 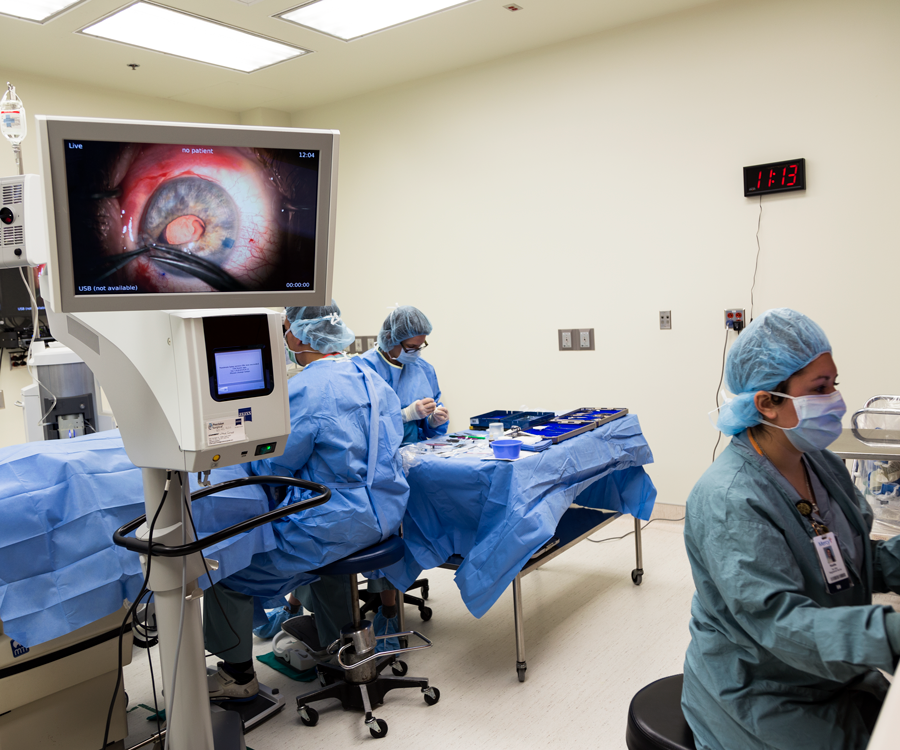 Photo by Savannah WaszczukWith the light turned on and some easy listening tunes playing in the background, Dr. Tauber and his team performed a successful cornea transplant on patient James Holder.

Minus the removal of one pesky wisdom tooth, I’ve never had any operations or surgeries to speak of. I feel fortunate that most of my hospital visits have been to greet new babies or to do interviews for this job. But it also makes me a bit curious. After all, if a single wisdom tooth removal even counts as a surgery, all I remember about it is laughing a lot and wishing I had more of that gas. This vague recollection made me realize that most people out there have no idea what it feels like to be in an operating room.

I called Sonya Kullmann, Senior Media Relations Specialist at Mercy, to see if I could join a doctor during an operation. Turns out they won’t let just anyone join in—I had to dig up my immunization records and show my latest flu shot scar, and they had to get permission from a couple of patients who were willing to let me watch. But then I was finally given the green light to join ophthalmologist Dr. Shachar Tauber in the OR.

After changing into scrubs and tying on a surgical mask, I headed to my first observation: Jacque Thummel’s cataract removal surgery. Thummel was having her left eye operated on during my visit, having the cataract taken out and getting a premium lens placed. I was one of eight people in the OR at first, and I sat in awe as the nurses cleaned and prepped Thummel’s eye while they chatted with her as if she were an old gal pal. I’m sure the last thing they wanted was her thinking about how her eye would be sliced open in a few minutes. This was obvious—the room felt at ease thanks to the friendly conversation. 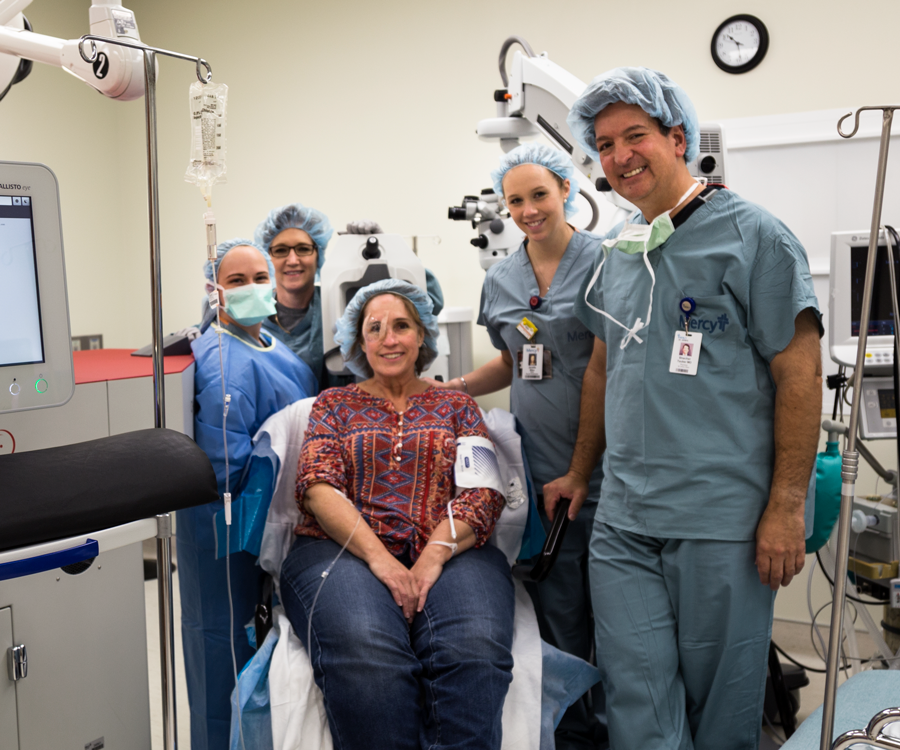 Photo by Savannah WaszczukJacque Thummel was all smiles after her cataract removal surgery with Dr. Shachar Tauber (far right) and his team. Thummel says the operation was stress-free.

When Dr. Tauber joined us and they dimmed the lights, I felt like I was about to witness a scene from ER, that old medical drama that used to haunt my dreams as a kid. I mean, we were working on an eyeball, right? I was sure there was going to be gushing blood and veins popping out everywhere. But there was nothing of the sort. After the lights went low, the mood did turn a bit more serious, but it was still relaxed in there. I watched everything that was happening projected on the CALLISTO eye machine’s full-screen display, as well as an even bigger high-definition monitor on the opposite wall. Dr. Tauber operated smoothly and confidently, explaining to Thummel what was happening at each step. She didn’t budge, despite the lid speculum holding her eye open and the laser cutting into it. It was all over in about 30 minutes, if that. Smooth sailing. The lights flicked back on, and it was back to happy chatter. As Thummel was propped up and about to be wheeled away, I asked her how it was. “Not bad at all,” she said. “Very relaxing, actually. Whatever they’re giving you—that’s good stuff.”

Next up was patient James Holder’s Descemet’s Stripping Automated Endothelial Keratoplasty (DSAEK). In lay terms, it’s a cornea transplant. After I walked in his operating room—which was again full of buzz and friendly conversation—Dr. Tauber showed me the file of the cornea we’d be working with. It told us where the cornea came from—a woman in her 50s who had died from a seizure the week before. I was amazed the body part came with all these details. It had its own little stat sheet, like we were buying a used car or something. Then Dr. Tauber showed me the cornea itself. Yes, the actual body part, which was sitting out in a teeny bottle on a little surgical table. It was fascinating to see, but also a bit terrifying for a klutz like myself—I was buzzing around the room taking pictures, and I kept picturing myself tripping over my own feet, accidentally catching that table on my fall and sending what was meant to be Mr. Holder’s new cornea flying across the room. But I guess that’s one of the many reasons I’m not a surgeon.

Much less of a klutz and much more of a medical expert, Dr. Tauber performed a stumble-free surgery No. 2 with just as much confidence and ease as the first. He had music that was requested by the patient playing in the room. I remember “Love T.K.O.” playing, among other easy-listening tunes. What better to get you in the mood for eye surgery than the mellow, bluesy voice of Teddy Pendergrass? The mood again was serious, yet it seemed everyone felt comfortable. That music helped. It was all so much less stressful than I expected. After the operations, I found myself hoping that I have a team like Dr. Tauber and his staff if I ever need a surgery one day. They ran that operating room like a well-oiled machine, and a welcoming one at that. Comfortable chatting? Check. A few laughs? Check. An entire cornea taken out and a new one put in within 30 minutes? Check. I complimented Dr. Tauber, and he said out loud what I was silently thinking all along—everyone in that room was an important part of what happened. “What you need to do is capture the spirit of these people,” he said. “That’s who makes it happen. I just push buttons.”