Born at 26 weeks and two days, Toby Armstrong was welcomed into the world with a plethora of complications. But thanks to a team of caring nurses, he’ll celebrate his first birthday next month. 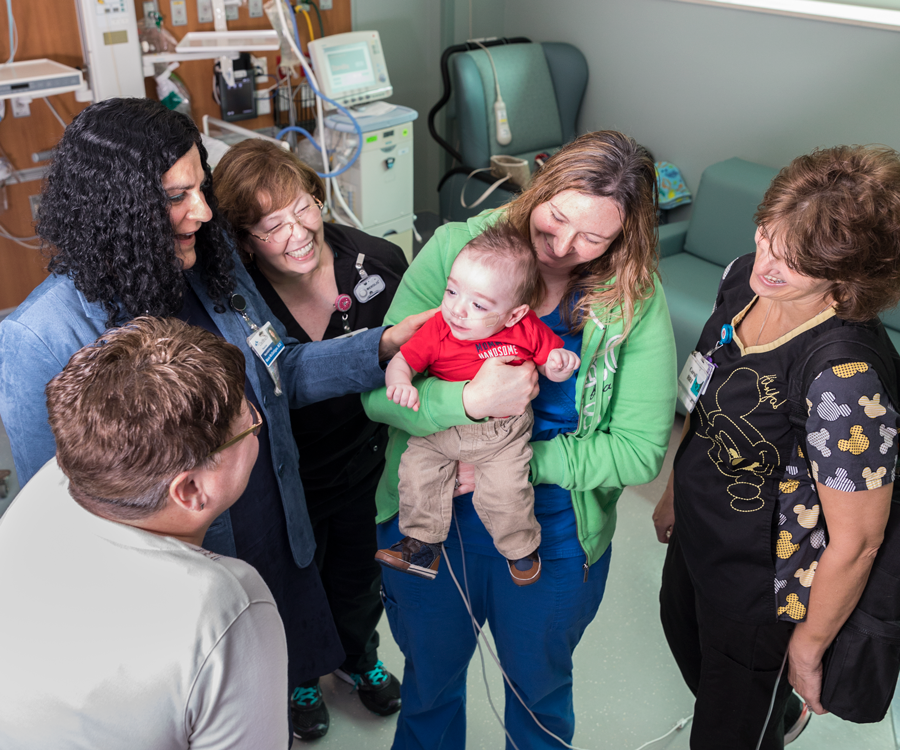 Photo by Brandon AlmsThanks to Dr. McGettigan (second from left) and many other CoxHealth nurses and specialists, Toby Armstrong and his mother, Amber, can celebrate a healthy life.

September 23, 2016, was a highly anticipated day for the Armstrong family. It was the day Amber and Brad were expected to welcome their second baby into the world. It was the day Carson, age 2, was going to become a proud big brother. It was the day the happy family of three would become an even happier family of four. But on June 19, 2016, those plans changed.

Amber had visited the hospital twice before this date due to complications. “I was having some problems bleeding, and the second time I came in, I had some fluid coming out,” she says. “That third time I came in, it was Father’s Day at 9:30 in the morning. My water broke. They were telling me, ‘Yep. Your amniotic sac is busted, and it’s not going to stop.’”

Ten hours later, the Armstrong’s new baby, Toby, was born at 26 weeks and two days. He weighed 937 grams, or 2 pounds, 1 ounce. Amber had a severe infection in her placenta, which was a contributing factor in the baby coming early. “He was appropriate for his gestational age,” says Dr. Marie McGettigan, MD, MS, MHA, a neonatologist at CoxHealth. And although he was in the 75th percentile of most 26-week-old babies, his early birth still came with several complications.

Toby was born with respiratory distress syndrome, meaning his lungs were not yet fully developed. The doctors also soon discovered that his ductus arteriosus—a fetal blood vessel in the heart that typically closes soon after birth—was patent, or open. “It did not close with two medicines, and that meant we had to do something else to close the PDA to avoid further damage to his lungs,” Dr. McGettigan says. On July 5, Toby was sent to a cardiologist at St. Louis Children’s Hospital to fix this problem. That operation was successful, but he was a very sick baby when he came back just over three weeks later. “It took a very, very long time for him to get stabilized,” Dr. McGettigan says.

From July 27 to December 5, Toby remained in the NICU at CoxHealth. And it was during these crucial months of care that he touched the heart of not only Dr. McGettigan, but also of the many nurses, therapists and others. “I’ve been here 32 years in May,” says Lisa Westerman, a registered nurse who served as Toby’s primary night shift nurse. “He’s one of the most memorable little boys I’ve ever taken care of.” Brenda Garrett, RNC-NIC, BSN who served as Toby’s daytime nurse, agrees. “I remember when I first got him to stick out his tongue for me,” Garrett says. One of his night shift respiratory therapists, Carol Cummings Smothers, remembers Toby’s instant mood shift when she’d see him. “Every time I would walk in the room he’d start acting ‘better,’” she says. This high level of care from the hospital team and the parents makes all the difference. “The whole thing about primary nurses and respiratory therapists who know the baby—they can really help troubleshoot and make them more comfortable,” Dr. McGettigan says. “For him, it was great when his primaries were on.”

Toby was transferred back to St. Louis on December 5 for several other surgeries, and he was finally discharged home on December 18. He still needs oxygen assistance and a feeding tube, plus he receives 40-hour-a-week care from Phoenix Home Health Care nurse Angie Clamors. But he’s going to be okay. “The doctors and nurses pretty much got me through it all,” Armstrong says. “I’d be so down, and I wouldn’t think I could make it, but then I’d look down at him, and he’s fighting for his life.” And while Armstrong credits the hospital team, Dr. McGettigan is quick to return the praise to all involved. “There’s no way this happens without full cooperation of the team—the team here and the parents,” Dr. McGettigan says. “The parents are so important. If the parents are involved, the babies do so much better. They have a much greater will to live.”