The 2015 Springfield Public Schools Hall of Fame honorees have dedicated their lives to helping and teaching others, both in 417-land and across the country. 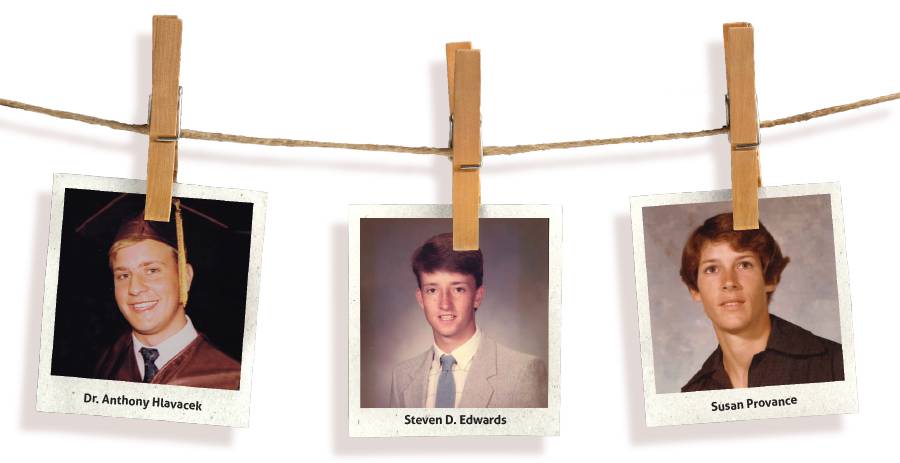 This year, three shining individuals are inducted into the Springfield Public Schools (SPS) Hall of Fame. The SPS Hall of Fame recognizes graduates for extraordinary achievement in their personal and professional endeavors. Nominations for the honor are taken every spring, and a selection committee of community members reviews the entries to determine the honorees. The individuals are honored at the Springfield Public Schools Hall of Fame Luncheon in October. This year’s inductees are Dr. Anthony Hlavacek, Steve Edwards and Susan Provance. Read on to learn their stories. 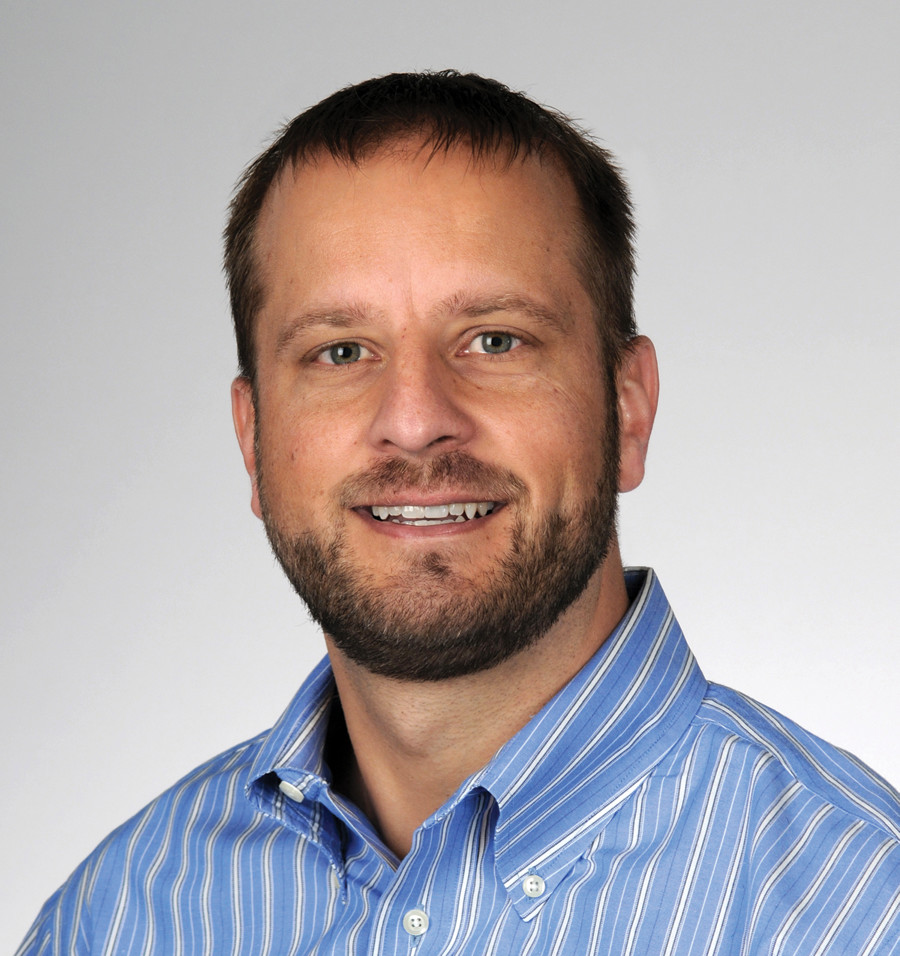 Dr. Anthony Hlavacek has known what he wanted to do with his life since he was 10 years old. “We dissected a cow’s heart in fourth grade, and ever since then I wanted to be a doctor,” he says. Always a lover of learning, he says his teachers instilled in him a fascination with science. But beyond that, he learned the importance of continually studying and having a good work ethic, and how to use those skills to help others around him. He moved on from fourth grade into middle school and high school, and after graduating from Kickapoo High School in 1992 he went to Texas Christian University in Fort Worth, Texas, to study pre-med and biology.

He completed medical school at Baylor College of Medicine, followed by a pediatrics residency at Texas Children’s Hospital. Then his fellowship took him to the Medical University of South Carolina to specialize in pediatric cardiology. He’s still there helping kids in the Children’s Hospital, but his heart extends overseas as well.

In 2006, Dr. Hlavacek and his family started going to Haiti to help with an orphanage and build a support system around it. They set up a charity organization that gets the orphanage and the children the support they need, and they helped set up a clinic and malnutrition program on the grounds that serve the entire community. “When I first started, I would see lots of patients,” he says. “But they didn’t have problems specific to (what I could treat), so we wanted to support the doctors that are already there.” Dr. Hlavacek and his group helped train local doctors and nurses, so they could continue to help their Haitian neighbors after the Hlavacek family returned to the states. Now, when Hlavacek visits regularly, he sees kids who are suspected to have a heart condition and finds solutions in his area of expertise.

Dr. Hlavacek still credits his time in Springfield for giving him the tools to succeed. He says he remembers teachers and coaches encouraging him to do his best and to step up and be a leader. He participated in student government, and was student body vice president his senior year. “I tried to lead where I could, and that translated into being involved in the community rather than just attending,” he says. 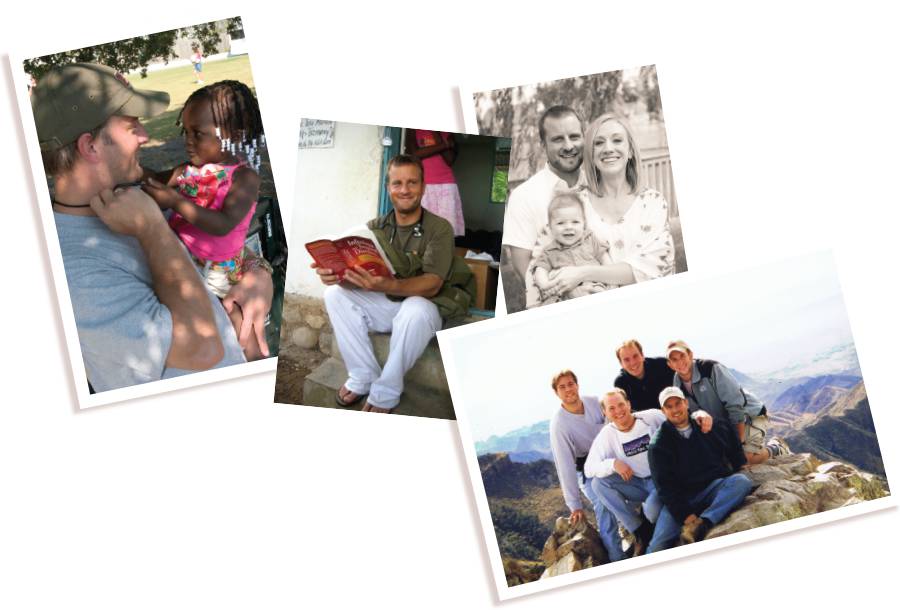 From left to right: Dr. Anthony Hlavacek holds Cierra, one of his patients from the Medical University of South Carolina Children’s Hospital. During a trip to Haiti, Dr. Hlavacek researches tropical diseases to prepare for a clinic session. The Hlavaceks spend time at their family home in South Carolina. Dr. Hlavacek hikes a mountain with his friends in North Carolina. 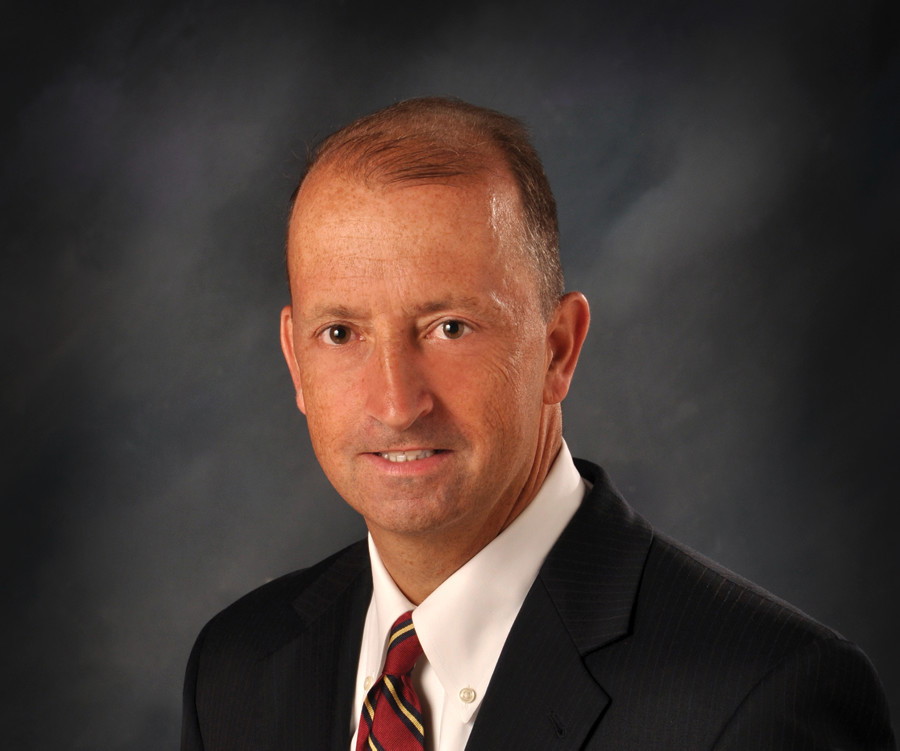 When Steven D. Edwards was 22 years old, he wrote down a plan for the rest of his life. He wanted to be a chief executive officer by age 45. He was announced as President and CEO of CoxHealth at age 45, and moved into the position at 46. In that position, Edwards has helped build many projects from the ground up. That’s also how he built his career at CoxHealth. His first position at the hospital was as a grounds crew member when he was in high school. Growing up with his father working at Cox, a young Steven used to make rounds with his dad, sparking his interest in healthcare. As a teenager, he worked as an orderly, a position he says taught him that he wanted to be on the leadership side of medicine rather than the clinical side.

After graduating from Glendale, he attended Drury University. He says he was very lucky to be involved in numerous organizations, and he realized he had an aptitude for organizational leadership. He got his master’s degree in health administration at Washington University School of Medicine in St. Louis. He completed his post graduate fellowship at Baylor University Medical Center and worked for the chief operating officer at Baylor Health Care System before returning to Springfield.

Edwards became an assistant administrator at Cox Medical Center South in April 1992. Since then, he has served in multiple leadership positions before taking on the role of president and CEO on Jan. 1, 2012.

During his time at CoxHealth, he has overseen many projects that have helped CoxHealth grow into the award-winning hospital it is today. Edwards had a hand in the addition of the new tower housing the Dee Ann White Women’s and Children’s Hospital and Jared Neuroscience Center, was there to merge the Skaggs health system into Cox Medical Center Branson, and helped create the Cox Medical Group joining more than 450 physicians and other advanced practice providers.

Edwards has stayed firmly rooted in his community. He met his wife in high school, and they later decided to raise their three children in Springfield. He is now dedicated to improving health in the Ozarks. He was a founder of the Community Blood Center of the Ozarks. He serves on the Burrell Behavioral Health Center board, the Missouri Hospital Association Board and the Drury University Board, among countless other positions.

Edwards says he has been fortunate to help thousands of people because a select few chose to help him when he was in school. He went his whole life not knowing he had dyslexia, only realizing he had it when one of his three children was diagnosed five years ago. He was able to overcome that challenge and gain confidence because of teachers who really cared, he says. He was grateful for his teachers then and is even more so now, he says. And he tries to teach others the same lessons his teachers taught him: If you believe in people and are kind to them, you may help uncover a hidden talent that could be used to change the world.

From left to right: In 1988, Steven Edwards graduated from Drury University. Edwards adjusts his son’s tie before he goes down the aisle as a ring bearer. In high school, Steven (far left) and his friends wade in the Eleven Point River. 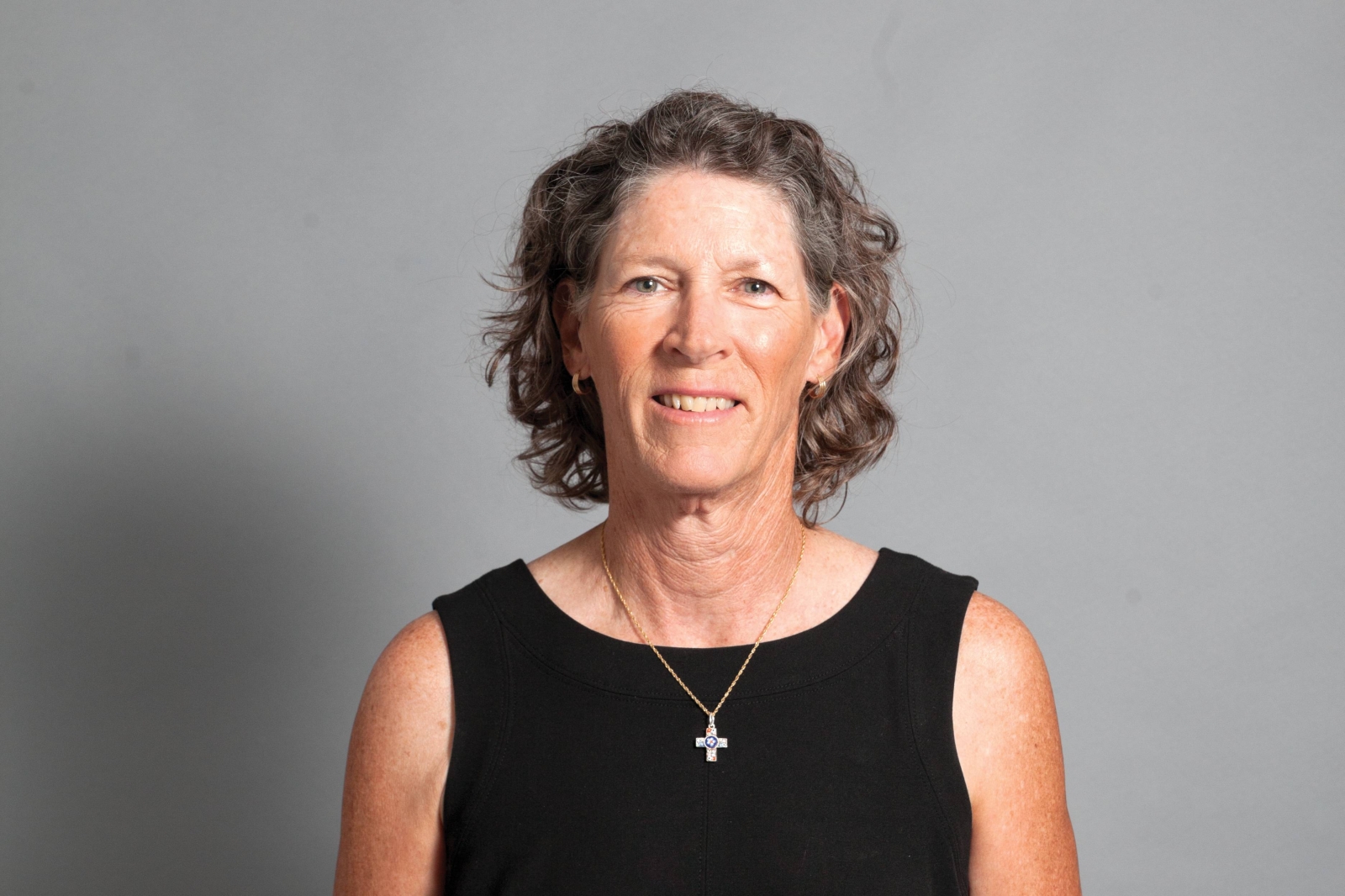 When Susan Provance (then Everett) attended high school, there were no official female team sports offered. But that didn’t stop her from being an athlete and finding her passion. She used intramurals to play basketball, volleyball and track in city competitions, and she played the drums in Scotties. “(Scotties) was the most athletic thing you could do without playing sports,” she remembers, saying she had too little gymnastic ability to make cheerleading an option. When she wasn’t on the field or court herself, Provance was leading chants on the sidelines in pep club. “Freshman year everyone got a sweater with the letter ‘G’ on it, and by senior year we had an established student section,” she says. “I did not miss a single football or basketball game.”

Provance took her love for the game and turned it into her career. Getting her start as the office assistant for the physical education coach in high school, she was asked to help teach golf. She fell in love with the role, and went to the University of Tulsa to study K-12 health, physical education and recreation. She played sports in college, and after graduating in 1975, she moved back to Willard to teach elementary and middle school P.E. and coach girls volleyball, basketball and track. After four years there, she settled in at Parkview High School, teaching P.E. and health and coaching girls’ basketball, volleyball and softball and boys and girls tennis for 26 years. “It was the best 26 years of my life,” she says.

Provance found her second love in teaching, and she says graduation was always the hardest part on her. “You realize the more kids make an impression on you, the more you really love them,” she says. One of the toughest things Susan says she had to do was quit coaching basketball when her oldest daughter, Laura, started playing at Parkview’s rival school, Glendale. “I just couldn’t coach against my own daughter,” she says. Provance left Parkview and went to Southwest  Baptist University to teach some activity classes in the physical education department and be the assistant coach for softball for one year.

Since June 2006, Provance has worked for the Springfield–Greene County Park Board as a Community Recreation Administrator, overseeing youth and adult sports programs and community tennis and working with the Park Board’s partnership with the Springfield Public Schools and SPARC after-school programming and summer day camps. SPARC stands for Schools, Parks and Reaching Communities. Susan says she loves that this position got her back to the kids and the classroom.

Provance says ultimately, she just wants children to enjoy learning and athletics as much as she did. “My job is to make school fun,” she says. 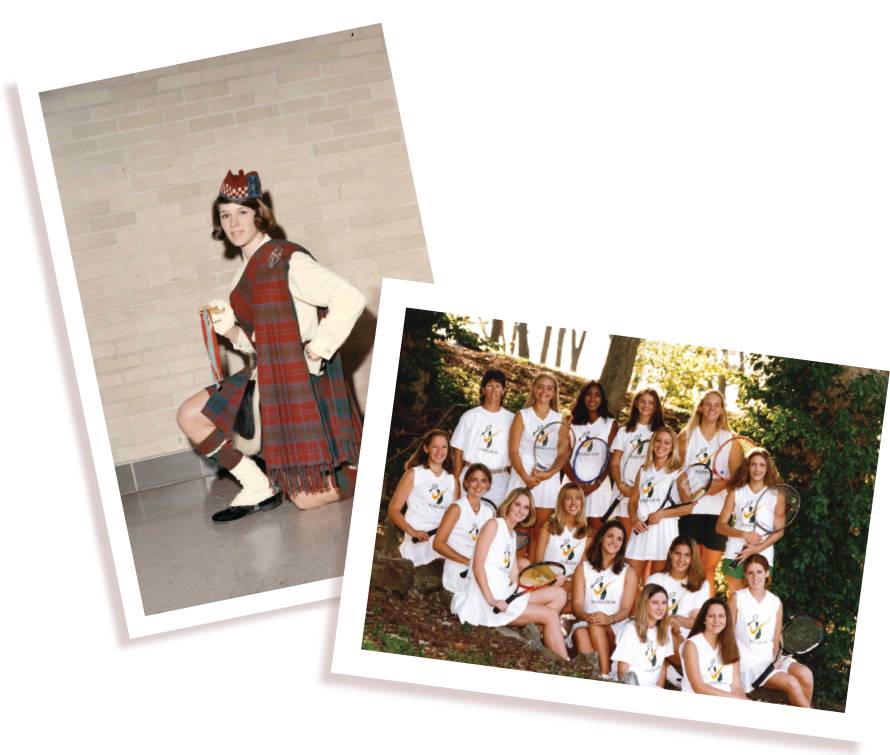 From top to bottom: Susan Provance participated in Scotties her junior and senior years at Glendale High School. After graduating college, she moved back to Springfield to teach physical education and health while coaching tennis and other sports at Parkview High School.