Q&A with Creators of The Beestra Bee Nursery 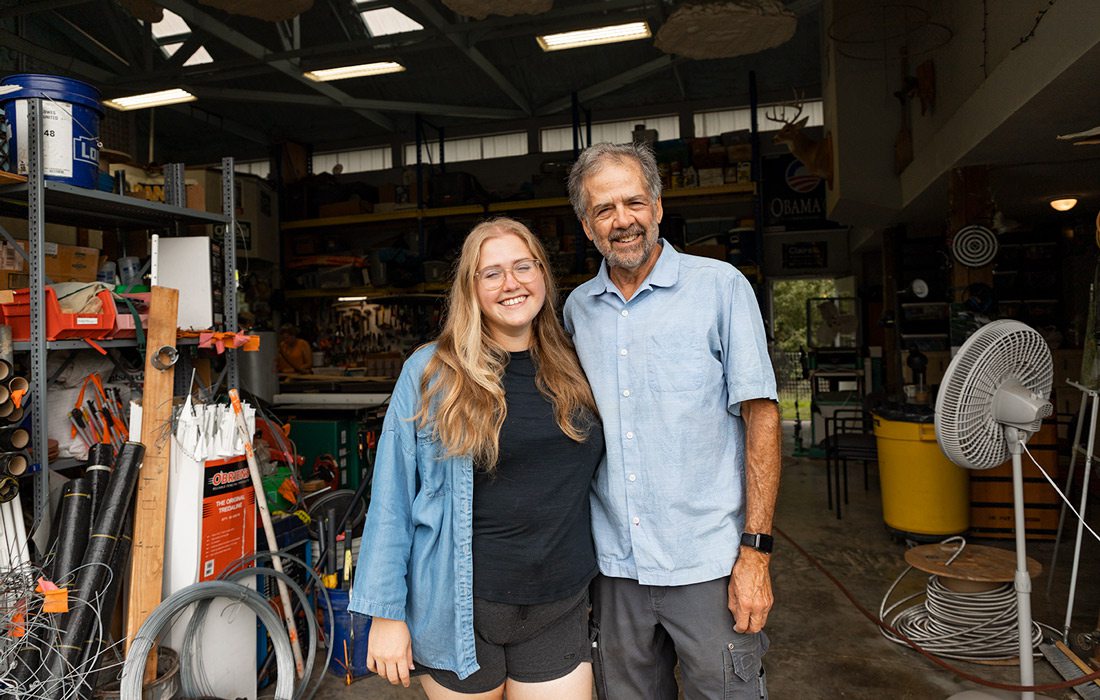 Photo by Leah StiefermannAmes Chiles and her father, Dan Chiles, came up with the product after learning that other bee houses were actually harming bees. Purchase Photo

417 Magazine: How did you get started making bee nurseries?
Ames Chiles: It was really Dad’s idea to start. He’s a voracious reader, and he had read at some point that people are becoming more and more aware of the plight of bees so in trying to do something about it they were putting out all of these bee hotels. And the thing about bee hotels is the vast majority of them on the market are actually a lot more harmful for bees than if you had just done nothing at all because they’re really poorly designed. They’re made to appeal to people and not to be safe for bees. It’s this huge epidemic of people putting up these horribly designed bee houses, thinking they were doing something good but actually doing something terrible. We wanted to meet those people and do something to help them help the bees in a way that is safe and effective.

417: Can you explain what a bee nursery is and how they are used?
A.C.: There are about 4,000 different species of bees in the United States and there are about 400 native species in Missouri alone and a pretty small percentage of those, but still a large number of bees, are weed nesting or stem nesting so they look for tubes in nature like hollow reeds, blackberry brambles that they nest in. Because a lot of those habitats have been destroyed, we try to replicate that with our tubes... You just set it up in a place near a lot of flowers, because that’s where bees like to hang out, and then over the course of their pollinating season they’ll seek out tubes.

417: What have you and your dad enjoyed the most about working together as a father-daughter team?
A.C.: We work very well together, we’re very honest with each other so there is a lot of back and forth. We’re both very creative people, sometimes we butt heads because of that. We both also really love the design aspect of it. I love it when something goes wrong because then I get to fix it. The problem-solving and needing to get creative to get a product as good as it can be really appeals to me.

417: What is the importance of native bees to our environment?
A.C.: There are studies that have estimated that about 1 in 3 bites of food are thanks to native bees. They’re so important to pollinating all of our plants. Native bees are so important because they are multitudes of times more efficient than honeybees. Just having a few native bees on your property is going to be so much more helpful with pollinating your plants… Bees are amazing pollinators for lots of things, among these is alfalfa which is the main food source for cattle. We can talk about how if you didn’t have native bees you wouldn’t have blueberries, almonds, cucumbers or any number of things but you also wouldn’t have beef. People would never put that together but it's true, they’re so important for our entire food chain. 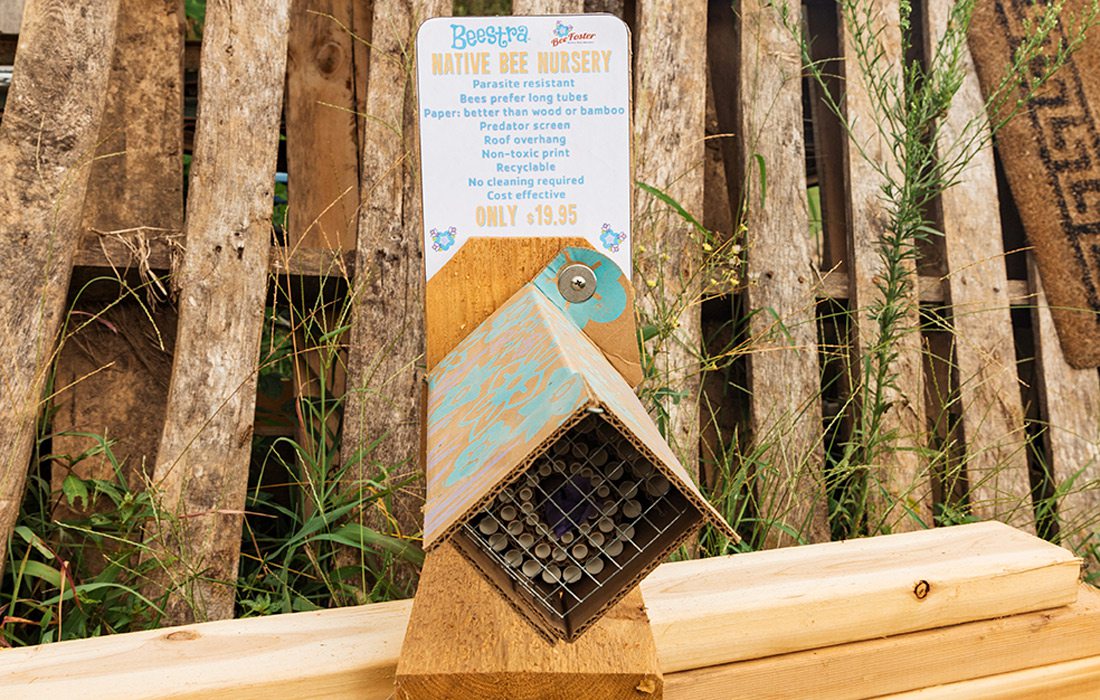 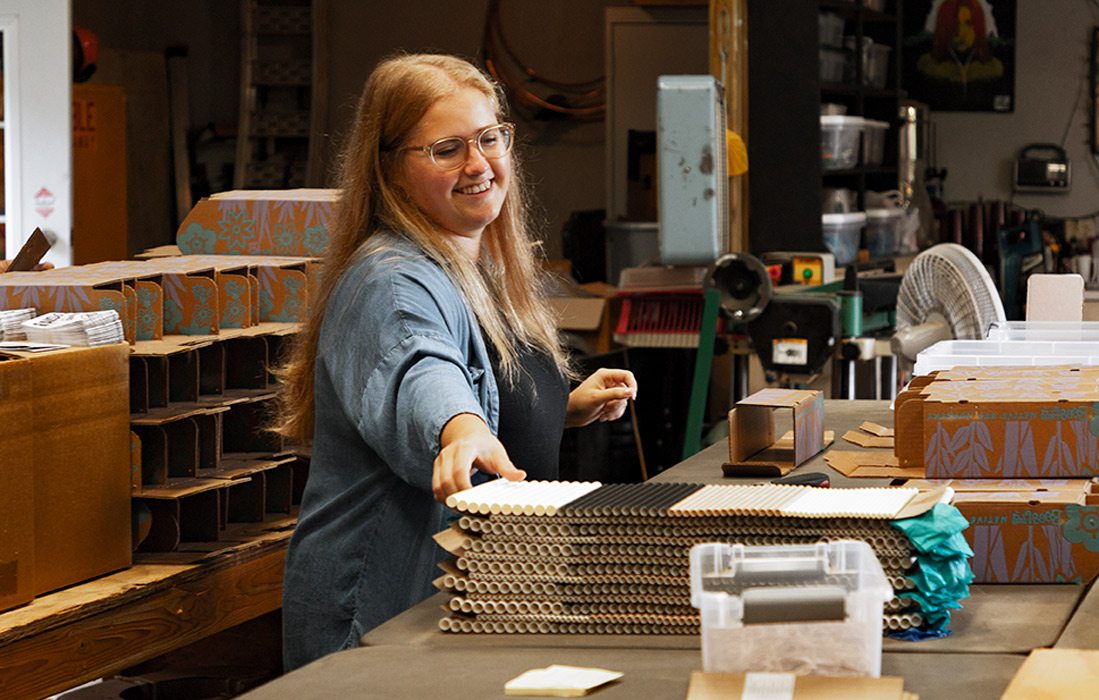 417: What is your mission with the Beestra?
A.C.: Really a big part of our mission is just awareness. Making sure that people know that these bees exist and know how to help them. I don’t think that our nursery on its own is going to save the bees, but what it can do it show people ‘is my yard hospitable to bees? Am I welcoming bees? Am I making my little part of the world safe for bees?’ I’m just hoping it can help people realize that they can be part of the solution.

417: What can people do to make their yards more hospitable to bees?
A.C.: You want as many native flowers as possible in yard. No matter where you live, there are tons of native plants you can put in your yard that are absolutely beautiful. Things like milk weed, asters, or any kind of fruit or flowering tree, vegetable gardens and berry bushes are great, anything like that.

417: What are the benefits of having a bee nursery in your yard?
A.C.: It tells you if your area can house bees or not. That is hugely valuable because if you put one up and find lots of activity you can rest easy. If you put it up and don’t get any bees all year, clearly something is going on. So that’s your cue to try to make your yard a little more welcoming. Bees are dying. There are not nearly as many as there used to be, and we are really starting to struggle agriculturally. We’re having to come up with expensive ways to pollinate plants, and it’s unnecessary if everyone is doing their part to help bring the bees back.

Check out the Beestra Native Bee Nursery on the BeeFoster website.