July 2019 marks one year since 17 people lost their lives when one of Branson’s Ride the Ducks boats sank. In the face of tragedy, community members and the staff at Cox Medical Center Branson heeded the call of duty and stepped up to help survivors. 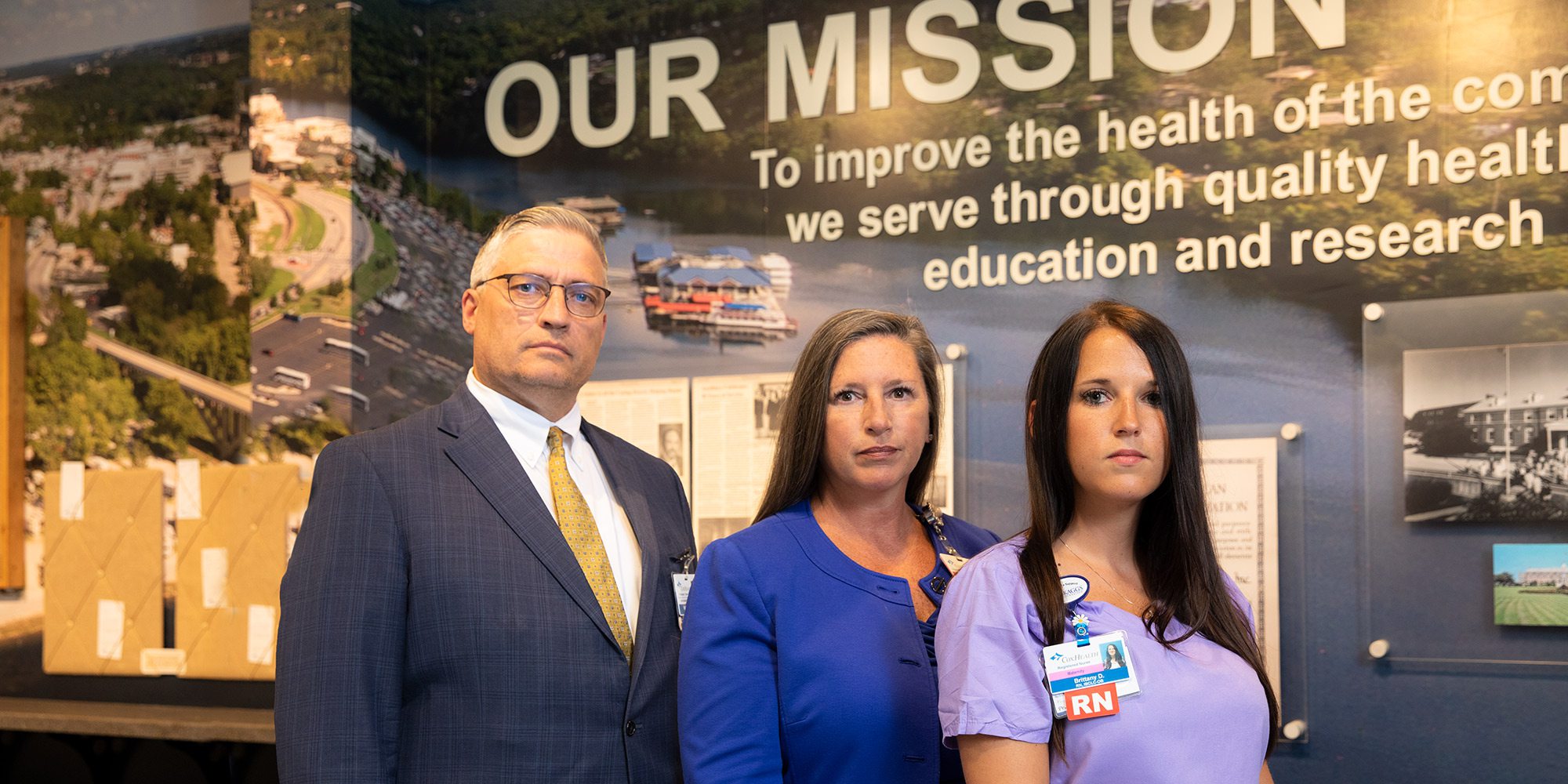 Photo by Brandon AlmsCox Medical Center Branson became ground zero after the Ride the Ducks boat sank, and staffers like William Mahoney, Lynne Yaggy and Brittany Durrer became the front line in serving the needs of the survivors. Purchase Photo

William Mahoney was at the movies with his family the evening of July 19, 2018, when his cellphone went off. There had been an accident on Table Rock Lake. Silencing his phone, Mahoney grabbed his things and headed to the hospital. Ten minutes later, he learned that a Ride The Ducks boat had capsized on the lake. As president of Cox Medical Center Branson, Mahoney is not clinically trained, but he knew he would have a role to play as he and the hospital’s team of physicians, nurses and counselors prepared for patients to arrive. Within hours, the hospital became ground zero as national news outlets crowded the hallways to cover the fatal accident. There were 31 people aboard the duck boat that night, and 17 of them—ages 1 to 76—drowned.

Like other hospitals, Cox Medical Center Branson trains for emergencies. “We train for shootings and bus accidents,” Mahoney says, so when he arrived at the hospital, the team was ready. Staff had been called in, and the marketing and communications departments were ready to handle calls from the press. As national news outlets converged on the hospital, the media team juggled inquiries for days. One patients fielded an interview from their hospital room, and the team was inundated with calls from news outlets who wanted to know the condition and number of patients at the hospital. That was part of the struggle—even Mahoney wasn’t sure who had survived. “It wasn’t until the next day at 10 a.m. that they released who was deceased,” he says.

To give survivors as much privacy as possible, hospital staff prepared private rooms, and children who couldn’t locate their parents or family were assigned a staff member who stayed by their side throughout the night. Eight patients were tended to at Cox Medical Center Branson. “Each had a different situation,” Mahoney says. One family of three came in wet and scared. Another patient lost nine family members when the boat capsized. “There was a little girl, and I held her hand,” Mahoney says. “She said, ‘I know my dad didn’t make it.’”

As news of the accident spread, family members began arriving. In some cases, they arrived without a change of clothes or money to get back home, and it was the hospital’s job to take care of them. Mahoney watched as the Red Cross and hospital social services stepped in and provided what was needed, but it was the community’s outpouring of support that really struck him. “When tragedy hits, people are unified,” he says, going through his mental list of community donations. Condos and hotel rooms were provided at no cost; passenger vans shuttled patients and their family members to the morgue in Springfield; even a local barber shop stepped up and raised money for survivors, and a nearby pizza shop donated pizza for the hospital staff so they could have dinner. “I was impressed by that,” Mahoney says. “That’s the goodness in mankind you see come out in times of tragedy.” 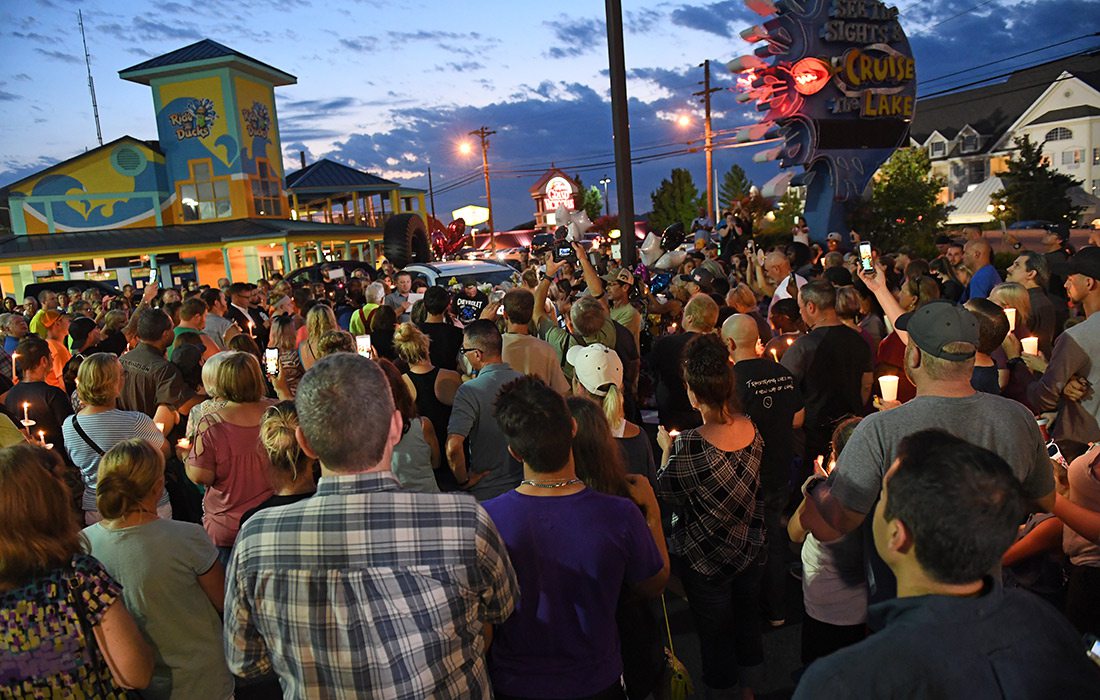 Photo courtesy ShutterstockWhen news of the accident spread, mourners gathered for a candlelight vigil in the parking lot of the Ride the Ducks attraction.

Part of what made July 19 so difficult for the team at Cox Medical Center Branson—and what pulled at the heartstrings of the national audience watching—was the nature of the injuries. “I’ve been here nine years,” Mahoney says, “Nothing like this has ever happened. People get hurt skiing or have boating accidents, but this was different.” These injuries were emotional. Lynne Yaggy is chief nursing officer and vice president of clinical services at the hospital. She’s been with Cox for 38 years and still says “nothing prepares you for that.” While the team had trained to handle severe physical trauma, Yaggy and the rest of the team were having to deal with what she calls “devastating emotional impact.” “That night, [the people who] came to us weren’t critically ill,” she says. “They needed a lot of emotional support. It was a nightmare. To lose your entire family, your children, your spouse.... I can’t imagine.”

For the first 24 hours, nurses, physicians, even Mahoney, just sat with patients and listened. “People need us in different ways,” Mahoney says, “but they always need you to be empathetic and caring.” For 12 hours, the team at Cox did what they could to calm down the survivors, many of whom were in shock. They held hands, they prayed, they called area hospitals looking for family members. “People just sat and listened,” Yaggy says. “The people who could swim survived, but their emotional injuries were so much harder.” 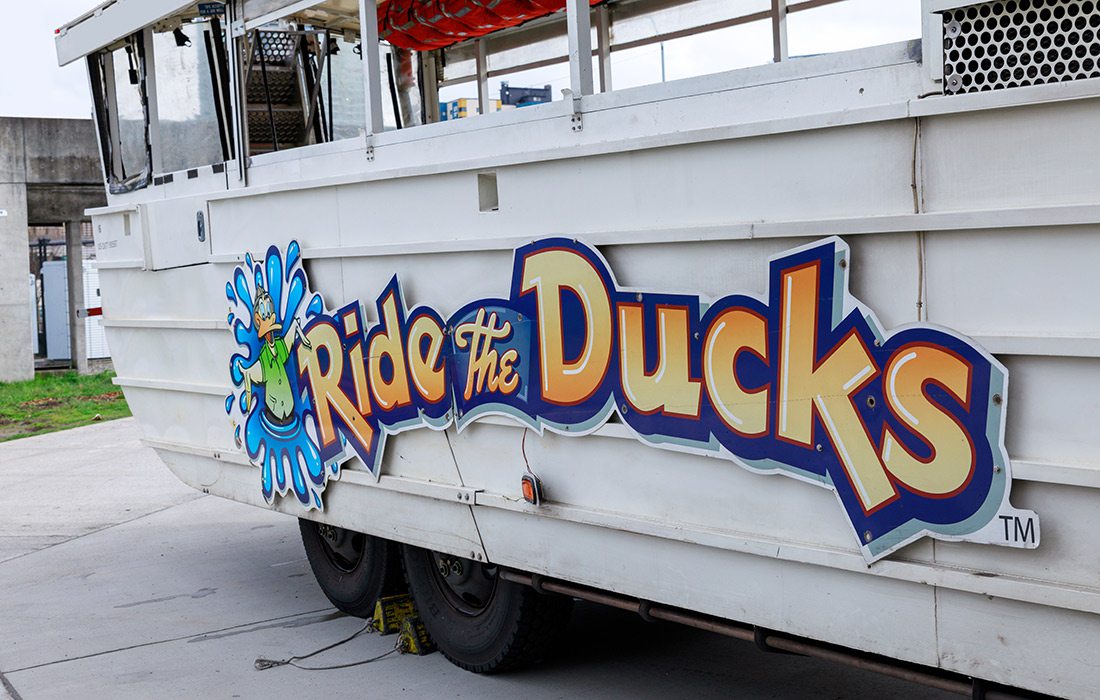 Photo courtesy ShutterstockWhen a boat from the Branson tourist attraction Ride the Ducks sank on Table Rock Lake, staffers like Chief Nursing Officer and Vice President of Clinical Services Lynne Yaggy stepped up to care for the survivors.

The Call of Duty

Brittany Durrer is an RN at Cox’s OB unit. She was at home the night the boat sank and watched horrified as the news covered updates of the accident. When she showed up at the hospital the next day, she came armed with beads and string. “In my head these kids needed something to do,” she says. Durrer was assigned to one child who had survived and was about to be discharged. “I remember them taking a gasp of air and saying they didn’t have any shoes to wear home.” The child’s shoes were heavy in the water, and they had kicked them off in order to swim until being rescued. Without hesitating, Durrer headed to her locker and pulled out a pair of black Nike tennis shoes for the child. After that, she called up her friend and dad to help bring shoes and other supplies to the hospital. They even had car dealerships make duplicate car keys to replace ones lost in the water. “It’s one less thing that family has to think about,” Durrer says.

Mahoney was also doing his part. Without clinical training, there wasn’t much he could do medically, but he could fetch blankets and food. One child put their head on Mahoney’s shoulder. “They were pretty physically taxed from having to swim in the water,” Mahoney says. “It made it real when my shoulder became wet and cold. I just thought their whole body must be like that.” Other stories about hospital staff going above the call of duty floated around the following days. Even the cafeteria made a special order of pancakes for one patient. “In our field, people are giving their all, all the time,” Mahoney says.

While most survivors were discharged after a few days, the emotional wounds from the boat incident lingered around the hospital for several weeks afterward. Mahoney says he was drained for about a month following the tragedy. “It’s not easy watching someone suffer,” he says. “I’ve never met a patient before who has lost nine of their family members. You go through so many emotions.” For this reason, the hospital has a critical incident team that works with staff after a serious tragedy like the one on July 19.

Even though the hospital trains for disasters and deals with death and loss on a daily basis, the emotional injuries sustained out on the water made an impact. Durrer remembers walking into the hospital the next day and realizing how somber the mood was. “Every person who walked in the door was trained to have a smile on their face,” she says. “But you knew they were fighting back something.” As nurses and physicians tended to the survivors, Durrer watched as they would leave a patient’s room and fight back tears. “I prayed the entire way to work,” she says. “Please use my hands to help these kiddos and show them love and support.”

As Yaggy describes it, hospital staff tend to compartmentalize their emotional struggles. “You move forward,” she says. “We do that on a daily basis. I could have a patient code and die in one room but still have patients to take care of. You have to have a balance, but there’s also a grief process.” A year after the duck boat tragedy, that grief process is still underway. Some scars might never fade, but the team is thankful they were able to help. “When you saw how our team met their emotional and mental needs, it’s impressive,” Mahoney says. “This is what we do every day. This is what we prepare for.”