The Demi Creative office space in downtown Springfield has a style as one of a kind as the websites it builds for its clients. 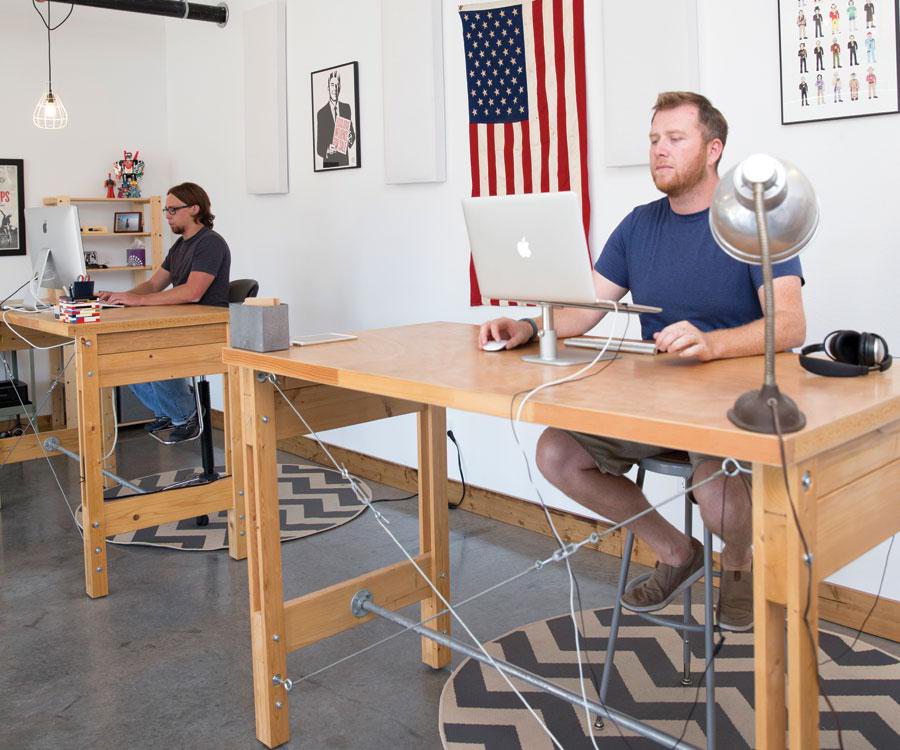 In less than a year, the crew has created a modern office that still fits into the vintage charm of downtown Springfield. Chad and Dan were able to make design choices for the space right from the beginning.

They bought the space when it was still under construction and worked with the builders before the fill work began. They asked the builders to leave the ductwork, lighting tracks and pipes on the ceiling exposed. This gives the office an open, industrial feel that adds to the style that Sophie describes as “very minimalist, but with bright and bold colors.”

How did Chad, Dan and Sophie keep their small space feeling open and still have all the resources they need to be successful? Easy: Nearly every element in the office has more than one function. And when they couldn’t find something they liked enough to buy, they built it themselves. This was the case with their ping pong and conference table and Chad’s and Dan’s standing desks.

The team made each design choice with their personal styles, and the flow of the workday, in mind. They wanted a space that would inspire creativity and collaboration and let them enjoy their work.

The team is proud of the space they built. The furniture and décor have been collected along the way, and Dan says they like to be resourceful. “We did a really great job of outfitting the space without having to invest too much,” he says. 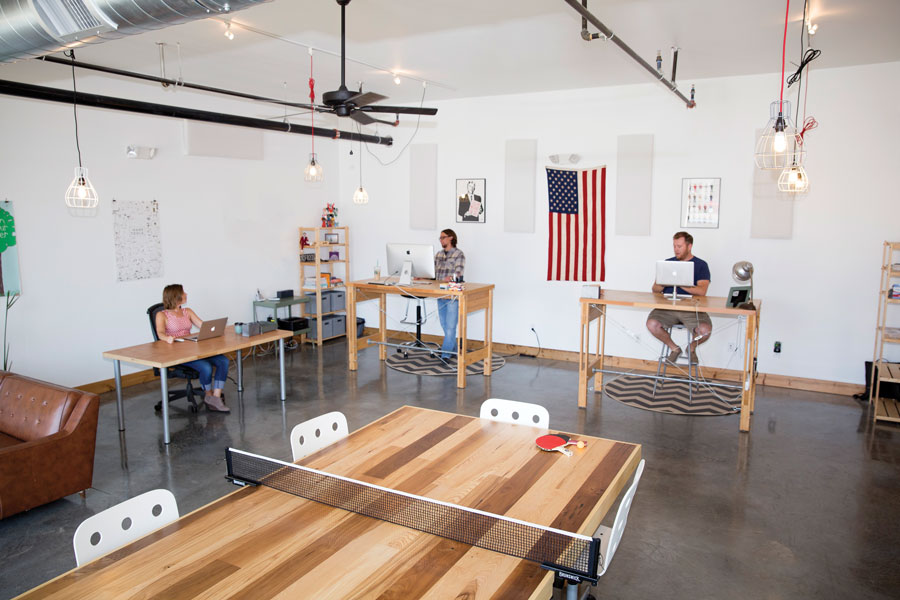 The clean look of the office is continued on the walls, where posters were selected to add personality. Dan says the simple décor is deliberate and is reflected in how Demi Creative builds websites for their clients. “Design is design,” he says. “It’s not so much what you put into it, but what you don’t put into it.” Sophie is a painter, so the team hopes to add space for a mobile gallery soon, so her art can be showcased and the office can participate in First Friday Artwalk in the future. 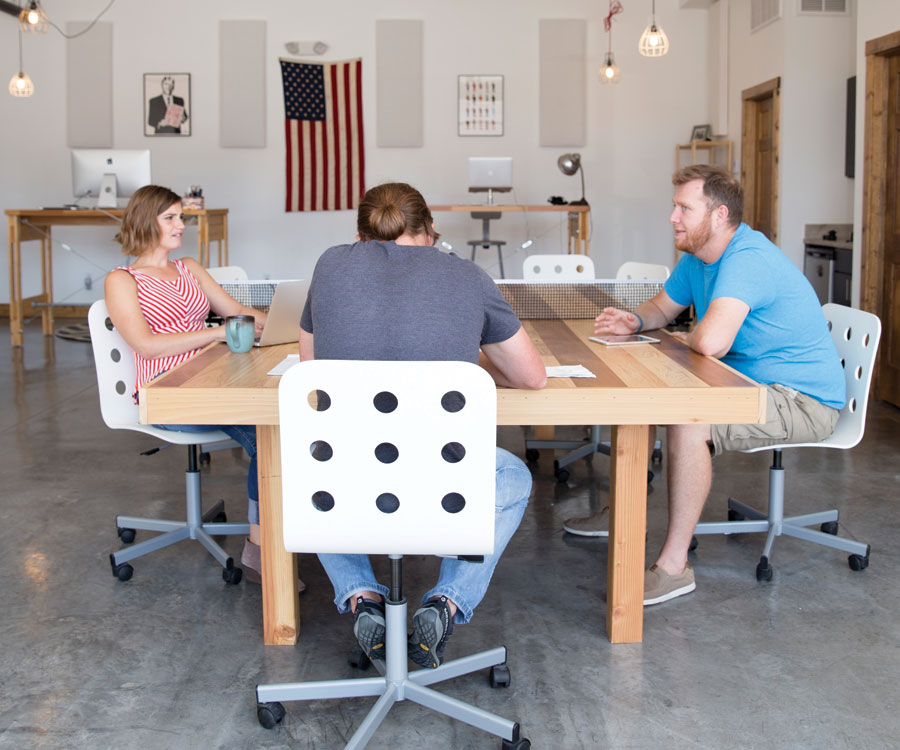 When it’s time to get down to business, Sophie, Dan and Chad turn the ping pong table into a conference space for collaboration and brainstorming. A client who works with hardwood helped them build the table, which is the central focus of the room. The Demi Creative team says the table also serves as a good conversation starter, and helps make clients feel comfortable when they come in for meetings. Then when the work is done, they might even challenge clients to a game or two. 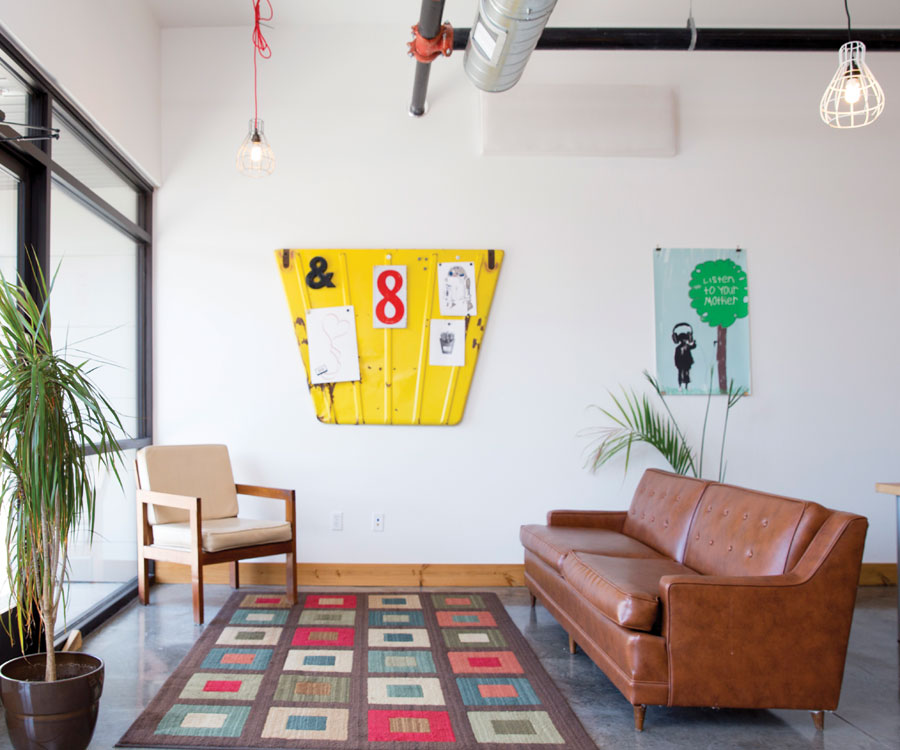 Dan collects anything involving vintage Volkswagens, and found this 1970s-era hood at a junkyard. It is repurposed in the office as a magnetic wall hanger to pin up inspiration. The giant front windows also add in a lot of natural light, which Chad says helps with winter utilities and lets the office be more eco-friendly. The team enjoys having open meeting spaces for when they need to escape their desks or make clients feel comfortable. 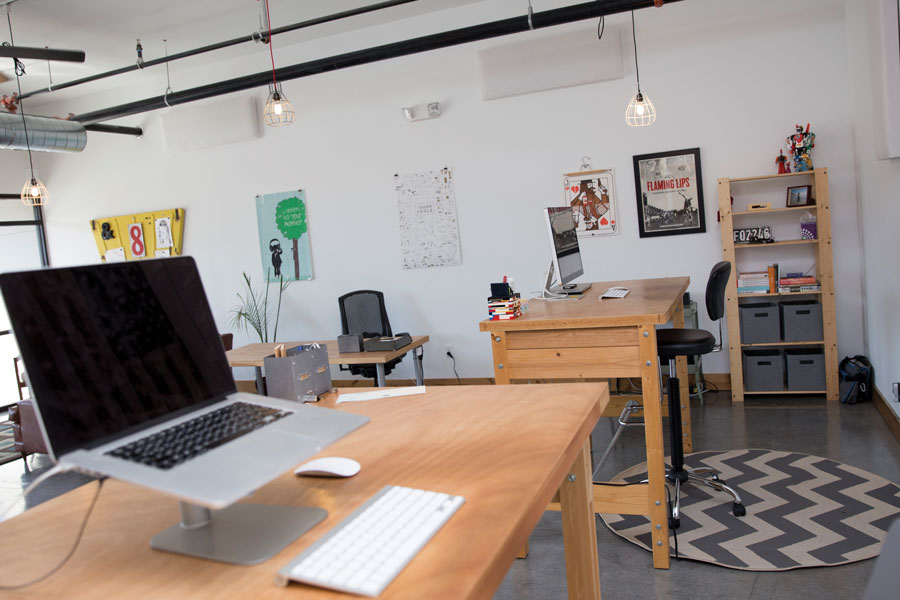 Chad and Dan built their own standing desks out of solid core door tops and basic lumber found at hardware stores. They purposely neglected to put barriers between their work spaces to avoid a cubicle feeling. “There are three of us in this space, so it needs to be open,” Dan says. “It allows for collaboration and keeps discussions open-minded. It’s easier for us to work that way.” 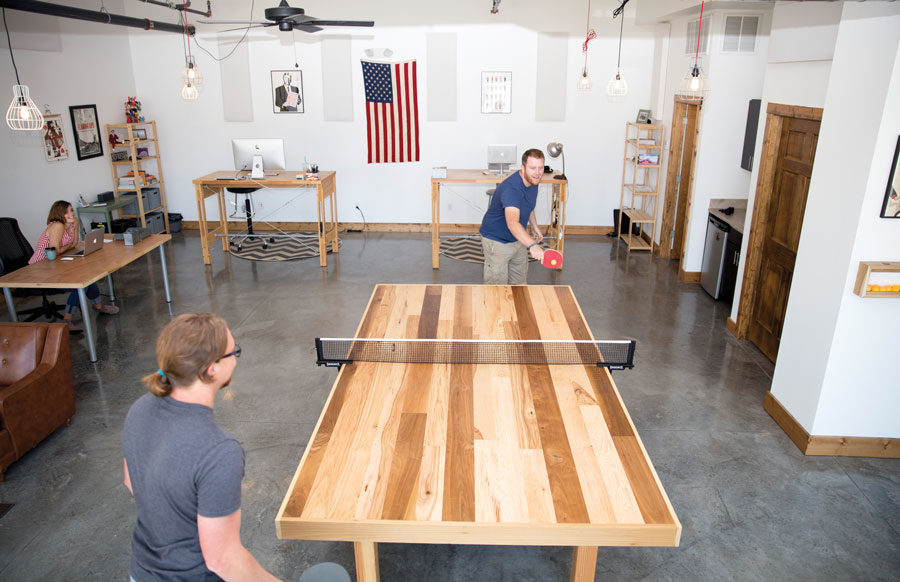 When the team needs a creative break or some extra blood flow in the day, they take the chairs away from the conference table and start an intense game of ping pong. Everyone has their own paddle, and if the loser happens to be on the side facing the front window, blinding sunlight shining through becomes a reason for handicap. The kitchenette and bathroom area tucked into the side of the office added some extra square footage. Chad and Dan got to pick the wood and countertop style from the materials already being used in the lofts above the office.