Nick Cuccia is a Medical Miracle

Sometimes the lifesaving work done by local physicians can seem miraculous. This story of a young man’s recovery from life-threatening injuries is just one example. 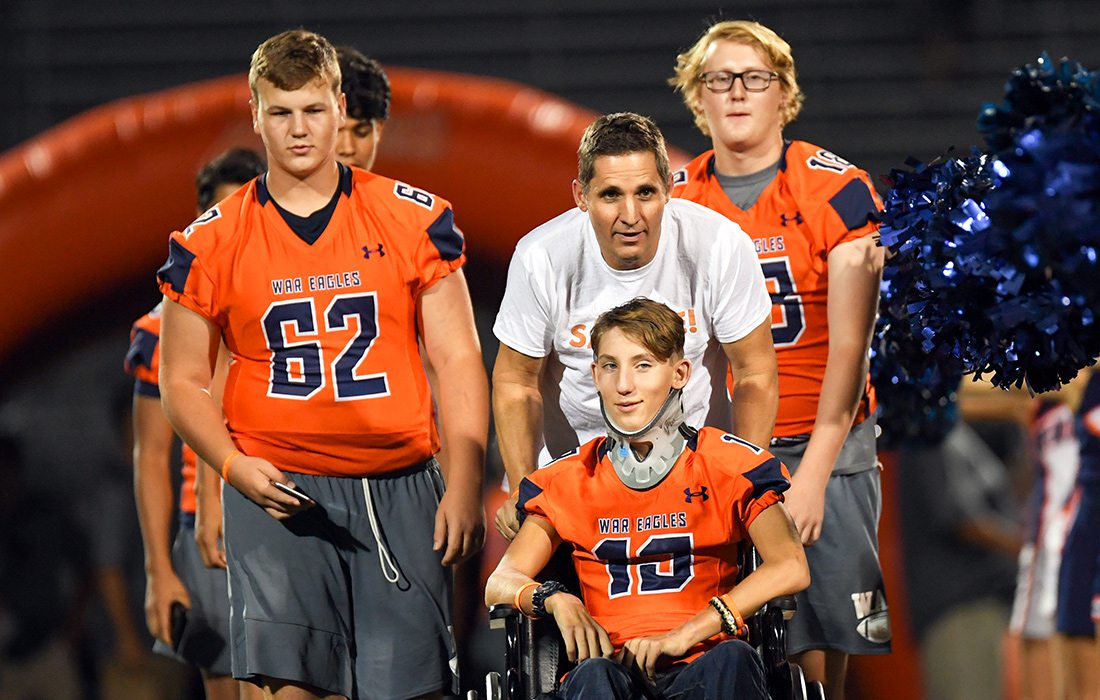 Photo by Mark Strickland PhotosNick Cuccia took some time to reconnect with friends at Rogers Heritage Flight Night after being hit by a bus. He is now out of a wheel chair and in physical therapy.

Nick Cuccia was heading home on his bike from his summer job when he attempted to navigate around a trash can. His handlebar clipped the can and he lost control, drifting into oncoming traffic. He was struck by a bus and landed 100 feet from the point of impact.

Cuccia was rushed to Mercy Hospital Northwest Arkansas in Rogers, Arkansas. Once it became clear he would need a higher level of care, he was transported to Mercy Emergency Trauma Center in Springfield. In total, Cuccia suffered a broken femur, had a collapsed lung, cracked his skull, fractured his pelvis in four places, had a lacerated kidney, broke his C6 and C7 vertebrae in his lower back and suffered a brain injury.

“His handlebar clipped the can, and he lost control drifting into oncoming traffic. He was struck by a bus and landed 100 feet from the point of impact.”

At the time of the accident, doctors at Mercy gave the teen a 5.5 percent chance of survival.  He was treated by orthopedic surgeon Dr. James Black of Mercy Clinic Orthopedics and neurosurgeon Dr. Sami Khoshyomn of Mercy Clinic Neurosurgery, who performed Nick’s surgeries. Now, almost a year later, Cuccia has made an almost full recovery.

Cuccia had three surgeries in total. The first two were performed by Dr. Black to repair his pelvis and femur. This is usually an extremely tricky procedure, but in surgery, Nick’s pelvis “came together like a puzzle piece,” says Erin Cuccia, Nick’s mother. The third surgery, performed by Dr. Khoshyomn, was to repair an unstable cervical spine involving two vertebrae in his neck, inserting a bone graft, plates and screws.

Doctors believe that because Cuccia is young, in shape and active, he was able to recover at a rate that exceeded their expectations. “For lack of a better word, [it was] a perfect storm,” says Jace Cuccia, Nick’s father.

Cuccia underwent occupational and physical therapy—he’s still in physical therapy—and other than the occasional sharp nerve pain is close to normal. It’s a remarkable recovery given the severity of the accident and his injuries.

“Nobody would know that he’s been in this accident if they met him or had a conversation with him,” Erin says.

Looking for the perfect healthcare provider? 417 Magazine's annual Top Doctors list features winning physicians in medical and surgical specialties throughout 417-land. These physicians were selected by their peers in the local medical community who voted for them in our Top Doctors survey.