As Director of Football Operations, Lynn Mentzer is a jack-of-all-trades for Missouri State football, the cog that keeps things running smoothly. We sat down with Mentzer for a wide-ranging Q&A. 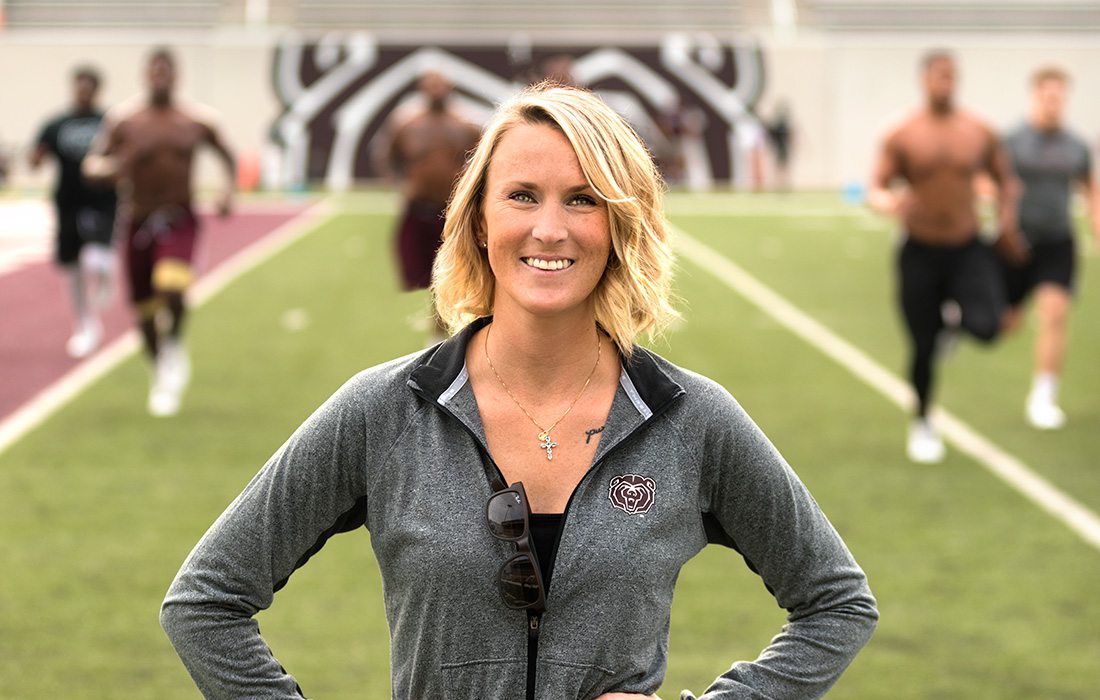 Photo by Brandon AlmsMentzer makes sure that anything and everything having to do with Missouri State football runs smoothly. Purchase Photo

Tattooed on the left side of Lynn Mentzer’s clavicle—she has a lot of tattoos, but this is the one you notice first—is the Costa Rican phrase “Pura Vida.” It translates to “pure life,” but it has a ton of uses: saying goodbye, a genial greeting, a general mantra. Mentzer got it after a six-day trip to the Central American country in 2017. She wasn’t the Director of Football Operations at Missouri State at the time, but given her job description, it now serves as a perfect metaphor for what she does. Organizations need people who stay on top of everything, and Mentzer fills that role at the school. It’s her first year at MSU after 16 years with the football program at Coastal Carolina. She has her hand in a little of everything; she makes sure that anything not directly related to football is out of sight, out of mind. There’s food to be served, hotels to be booked, flights and buses to arrange. Head coach Dave Steckel coined her “Mama Bear” for her nurturing personality. Mentzer has never been asked for an interview before—an indication of how those behind the scenes are often not covered. In advance of Missouri State’s football season, we decided to fix that, sitting down with Mentzer to chat about her new post and what it’s like to be a woman in a male-dominated field. “I feel like I’ve done everything but be out there and coach,” Mentzer says.

417 Magazine: How has the job been versus what you expected when you started in January?
Lynn Mentzer: Honestly, these coaches make my job so easy. For the most part, they’re very self-sufficient. I came from a program at Coastal where our coaches, they had three responsibilities. They were supposed to coach, they were supposed to recruit, and they were supposed to worry about their players, make sure they’re going to class, that kind of thing. Everything else fell onto us in the operations office. We did recruiting weekends. We did Pro Day, camps, travel, meals—anything outside of those three things fell on us. Whereas here, each coach kind of has his own responsibility. But they’ve been so self-sufficient and done it on their own for so long that they’ve got their own way of doing it. So I’m slowly trying to pull some of that responsibility from them and help them in that regard.

417: How has the attitude toward women in sports changed throughout your career?
L.M.: You have to prove that you know what you’re talking about. You have to prove that you’re professional, and you’re there for the right reasons, so, over the years, it’s been frustrating at times, and it’s been tough at times, but that’s another reason why I enjoy being here so much because I think Coach Stec and a lot of the other coaches, they saw right away that I knew what I was talking about, and they’re very receptive to my suggestions and my input. Being here has been different from things I’ve dealt with in the past, and it’s really been an amazing experience for me. 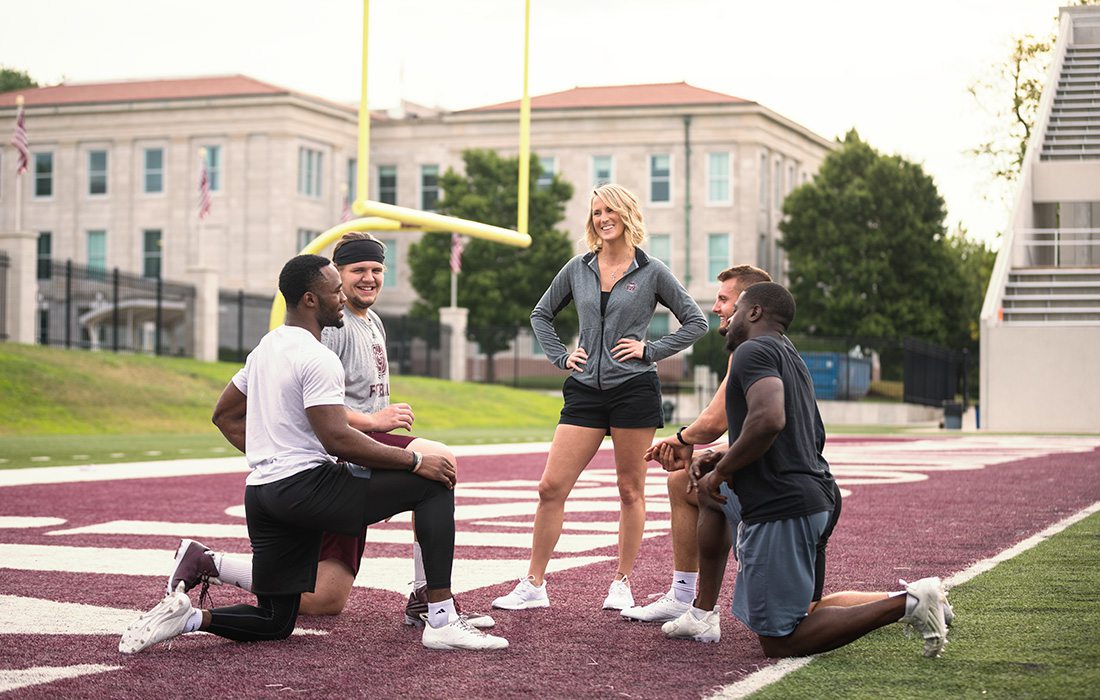 417: Tell me about your relationships with coaches and players within the department.
L.M.: It’s funny because [when] it started out, I was like the sister to all the players. When I was a student, we would all hang out together.

417: Because you were their age.
L.M.: Right, exactly. And really and truly it was like having brothers, and it made dating really tough. Then as I’ve gotten older, and obviously the kids stay the same, I’ve taken more of a big sister—or like now it’s kind of like a mom—role. Some of my best friends are guys from those first couple teams at Coastal because we always hung out together. We were in classes together. But I’ve always kept in touch with them because I’ve always had that relationship where they can come in and they can talk to me about things maybe they couldn’t talk to their coaches about, or if they just needed somebody to listen. I think about, for example, our guys in the NFL. At Coastal, we had Josh Norman. Watching him on TV, I got teary-eyed because he used to be, like, that was my little brother when he was in school. His older brother played for us, and I was very close with his older brother. And then [Josh] came in, and he played for us. He was really like my little brother. He used to come in and sit in my office all the time, like almost every day, and talk to me about his girl problems. Watching him on TV, I was like, “That’s my little Josh!”

417: Missouri State as a program is trying to turn a corner after seasons that haven’t gone as well as it’d hoped. Where do you fit into that?
L.M.: We do have a very young coaching staff. A lot of our coaches, they’ve played or they’ve been GAs; they’ve been around. But really and truly, some of our coaches, I’ve been around college football longer than they have. So I think my experience and my knowledge, I think that helps. My job really and truly is to make their lives easier. They should worry about coaching, they should worry about players, they should worry about getting done what they need to get done. Everything else should be on my shoulders.

417: How do you balance and handle communication and know when to speak up?
L.M.: Even though I’m kind of the new kid on the block, it’s very much a family atmosphere, so it’s very much just working with, not just your friends, but like your family. We go back and forth, like we joke with each other and whatnot, but it was really surprising to me to come in here because a lot of these coaches are self-sufficient.

Cheer on the Missouri State Bears when they play at home. Check their schedule for the most up to date games and times.